Chek Jawa with signs of dugong

Once a year, we do a health check on the northern shores of Chek Jawa. This trip was particularly poignant for me as my last field trip with Subaraj was here. 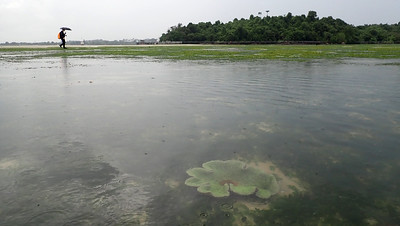 Rain meant a shorter survey on the sand bar as we kept closer to shelter in case of lightning. But we managed a quick check and saw dugong feeding trails in the lush seagrass meadows and other interesting marine life. Thanks to NParks for permission to survey the shore.

As usual, there were lots of shorebirds. The few that I can recognise is the large Great billed heron. I miss Subaraj every time I see shorebirds, but especially on Chek Jawa. Subaraj was at our survey here in Jan 2019, where as usual, he shared his observations of the shorebirds here, and we learned so much from him. 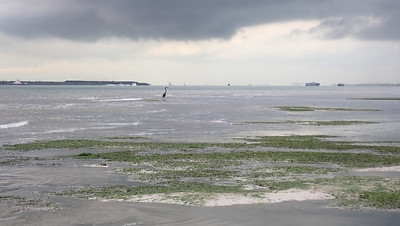 There were many clear dugong feeding trails in the lush seagrass meadows growing on the inward side of the northern sand bar. 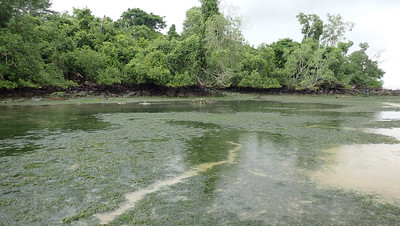 There was also some trails in the seagrasses nearer the boardwalk. 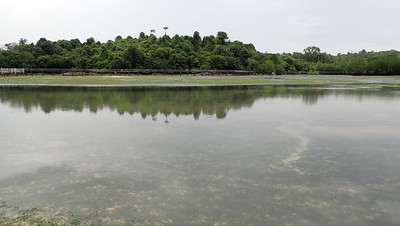 Chek Jawa has some of Singapore's best seagrass meadows: covering a large area with lush, dense growths. While we can get a glimpse of the meadows near the boardwalk, the annual check up of the northern shore helps us see how the seagrasses are doing there. It was good to see that seagrasses are also growing well on the seaward side of the northern sand bar. 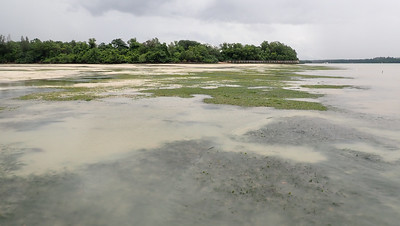 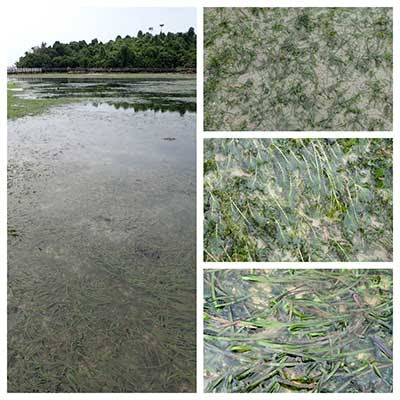 I noticed a few patches of bleaching Spoon seagrass near the boardwalk. Seagrasses lose their chlorophyll (which gives their green colour) when they are stressed. 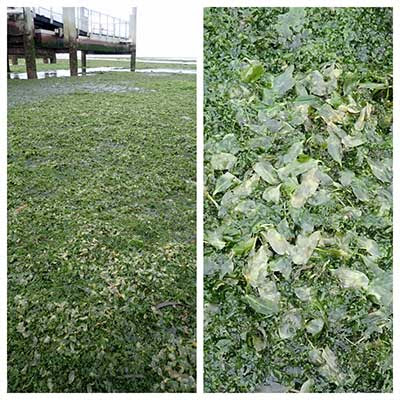 The northern sand bar remains long and wide, which is great as it shelters the large lagoon of Chek Jawa where seagrasses and marine life flourish. 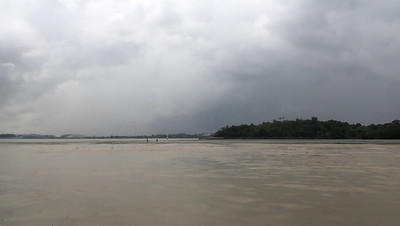 The most common animal I saw on the sand bar were moon snails. These are fierce predators of buried prey. Here's one Ball moon snail hunting on the sand. 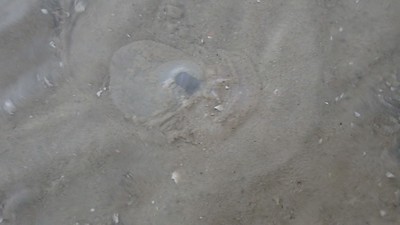 Here's a Tiger moon snail attempting to drag down a small clam into the sand. Tiger moon snails were particularly abundant here. I did not manage to find any Button snails on our brief survey on the sand bar itself. Although there were many of their shells, occupied by tiny hermit crabs. 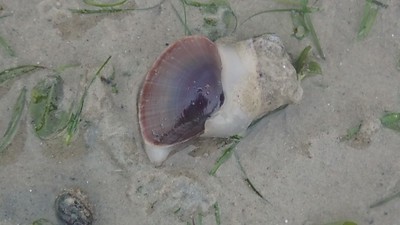 I noticed many small Window pane clams on the seagrasses. I didn't see any live Noble volutes but did come across one egg capsule. I saw one Bonnet snail. 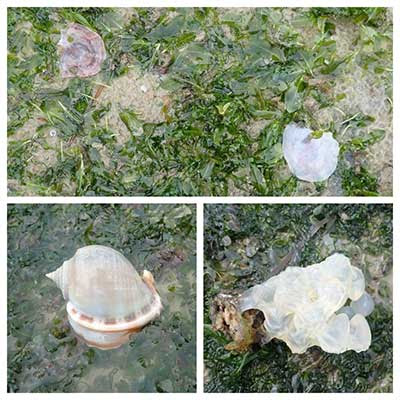 There are still many large Fan clam shells on the shore near the boardwalk, which I had also noticed in Dec 2019. Fortunately, I still did not come across any of the clams that had taken over Changi beach in late 2019. 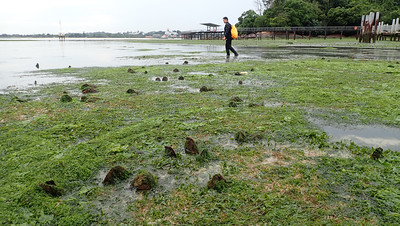 We were hit with heavy rain before we could start the survey proper. As we waited under shelter, I am reminded that flooding is believed to have caused the mass deaths at Chek Jawa in 2007. When carpet anemones ballooned up and burst, Garlic bread sea cucumbers came to surface and died, Common sea stars disintegrated and sponges melted. More than a decade later, some animals have yet to return in their previous numbers. While intertidal marine life can cope with short duration rain, continuous rain over weeks is believed to have caused mass deaths like the 2007 incident. 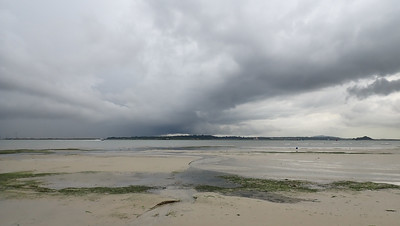 Today, after the rain stopped, I noticed the Cake sand dollars on the northern sand bar were producing slime. Most of the ceriantids I saw were retracted into their tubes, although I saw one that had expanded tentacles. I saw many Haddon's carpet anemones and some Swimming anemones; they were alright. I also saw many medium sized Garlic bread sea cucumbers and many small Pink warty sea cucumbers, but only one Thorny sea cucumber; all seemed healthy. Today, I didn't see any dying sea stars like we did on our last survey here in Dec 2019. 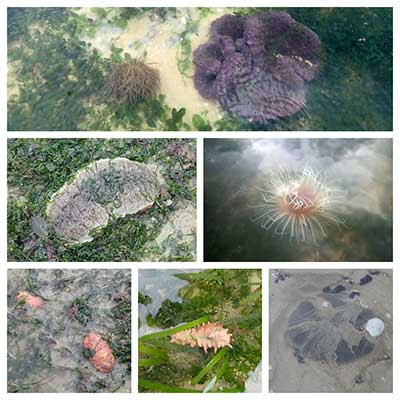 We only first started to see the return of Common sea stars this year, on our predawn survey of the southern shore of Chek Jawa in Aug 2020 (Chek Jawa is too large to do everything in one brief low tide window with a small team). The sea stars are still here today! Before the 2007 mass deaths, they were so abundant, you could hardly walk on some parts of Chek Jawa if you wanted to avoid stepping on them. After more than a decade of absence, let's hope they are coming back for good. 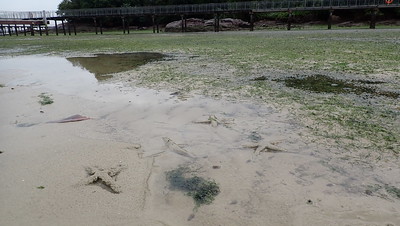 As lightning started over Changi, we moved towards shelter and briefly checked out the amazing marine life growing on the 'legs' of the boardwalk. Lots of colourful sponges! Nudibranchs eat sponges, so when I saw a nudibranch egg ribbon (yellow blob out of water), I looked for and found the Beaded nudibranch. There were also sea cucumbers, cowries and sea stars. 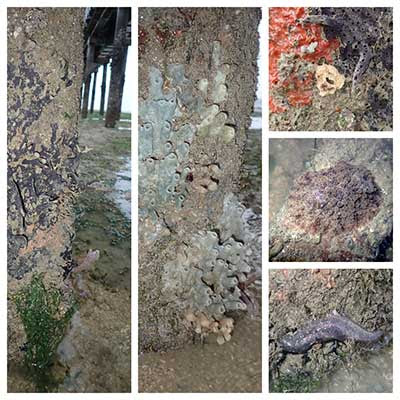 It was an exhausting survey. I don't know why being wet just makes me more tired. But I'm glad we managed to have a quick look at this precious shore, that we only check up on once a year.

The 2013 landuse plan by the Ministry of National Development released in response to 2013 Population White Paper shows plans for 'possible future reclamation' (in light blue surrounded by dotted lines) that may impact Chek Jawa.

The plan includes plans for a road link (black line) from the mainland jumping off at Punggol, crossing to Pulau Ubin through Chek Jawa to jump off to Pulau Tekong before circling back to the mainland on Changi East. Proposed reclamation (in yellow) will bury Pasir Ris shores, Pulau Sekudu and Chek Jawa as well as a large amount of shore at Changi Beach. I feel it is thus important to update our understanding of what is going on in the field at these sites including Chek Jawa and Pulau Sekudu.

The fate of Chek Jawa is in our hands! Before COVID, volunteers of the Naked Hermit Crabs conduct free walks on the boardwalk for families. Do join them once the walks re-start! 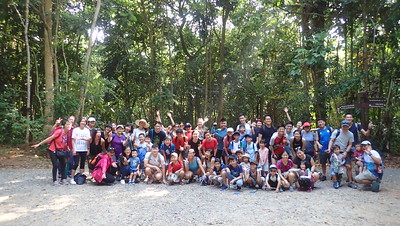 DOWNLOAD the Plan, SUPPORT the Plan! More on the Singapore Blue Plan 2018 site.
Photos by others on this survey