Sandflies: the bane of our shores

Sandflies are the beasts I most dread on the shore. I fear them even more than mosquitos.

Why? Because I can't see or feel them when they bite. I only find out I've been attacked a few hours or a day later, when the bite marks itch ferociously. And continue to itch for weeks. Often turning into hideous ulcerating wounds that make people wonder if I have some sort of communicable disease. 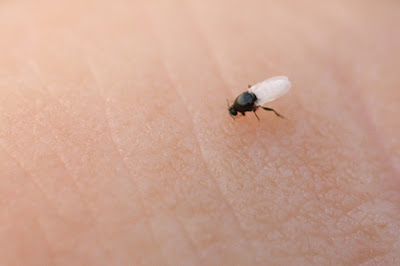 This photo taken by James today is definitely of a sandfly. It was biting Chay Hoon, who patiently put up with the bite in the name of documentation. Tanah Merah is probably the most sandfly-infested shore that I've been to in Singapore in recent years.

According to Wikipedia, the term 'sandfly' is commonly applied to a wide range of species and families of annoying biting critters. But they are generally true flies (Order Dipteria) which includes the mosquito and our familiar houseflies.

Why do they bite us?
Like mosquitos, it is the female sandfly that bites us for the blood meal that she needs to make her eggs.

Are they dangerous?
Besides resulting in highly irritating bites, in some places, some kinds of sandflies can trasmit leishmaniasis or sandfly fever. So far, I've not heard of this happening in Singapore.

How to deal with bites?
Scratching is not a good idea. It just gets itchier (in my experience) and the wound bleeds, gets infected and it is STILL itchy.

What works for me is to heat the bite with hot water, as hot as I can stand without getting second degree burns. Do this as regularly possible and the itch goes away in a few days instead of a few weeks. Chay Hoon swears by the hair-dryer treatment. In the office when, obviously, I can't put a hand under a hot shower, I just get hot water in my mug, put a spoon in it and then put the hot spoon against the bite. Ah...wonderful relief. But try not to do this infront of colleagues, especially if the bite is in an odd place.

In fact, as a standard routine, I try to douse all exposed skin with hot hot water as soon as possible after a field trip.

People have shared on the net lots of other treatments that worked for them. Some are in the links below.

How to avoid being bitten?
Don't go to places where the sandflies hang out. Like shores and other damp places.

OK, but IF we want to go the shores then how?
In my personal experience, sandflies tend to be more plentiful near the high water mark and near sea walls. Out on the reef flats, seagrass areas and sand flats, they are less plentiful. Although when there is no wind, they seems to be able to get out to you no matter where you are. They do seem to swarm in numbers at sunrise and sunset, but I have been bitten at all times of the day. Windy conditions tend to be more fly-free. And some shores appear to have seasonal infestations of them, e.g., Chek Jawa.

My personal bite-minimization approach
(I find there is no way to get zero bites):
Here's more links to Singapore experiences and antidotes to sandflies. Seems like any outdoor activity has a risk of sandfly bites.
Have a sandfly experience or remedy to share?
Just leave a comment on this post. Thanks!

Study warns of bug spray risk
Some levels of Deet may be toxic to nerves
Straits Times 7 Aug 09;

PARIS: One of the world's most common insect repellents acts on the central nervous system in the same way as some insecticides and nerve gases, according to a study released this week.

Moderate use of the chemical compound, called Deet, is most likely to be safe, the researchers say.

However, experiments on insects, as well as on enzymes extracted from mice and human neurons, showed for the first time that Deet can interfere with the proper functioning of the nervous system.

Researchers say that further studies are urgently needed to assess Deet's potential toxicity to humans, especially when combined with other chemical compounds.

The researchers' findings may also shed some light on the so-called 'Gulf War Syndrome', the name given to a complex and variable mix of neurological symptoms reported by tens of thousands of US military veterans who served in the first Gulf War against Iraq in 1990 and 1991.

Developed by US Department of Agriculture scientists just after World War II, Deet has been available as a bug repellent for more than five decades.

Sold in the form of lotions, creams and sprays in concentrations from 5 to 100 per cent, it has been widely used not just by weekend campers but as a front-line barrier against malaria, dengue fever and other mosquito-borne diseases.

Some 200 million people use Deet-based products every year, according to the study, published in the British-based open-access journal BMC Biology.

Scientists still do not know exactly how the compound works on blood-seeking insects. Some say it blocks the sensory neurons that would be titillated by a potential meal, while others hypothesise that bugs are simply put off by the smell.

More surprising still, there is relatively little research on the effects of Deet in humans.

'It has been used for many years, but there are recent studies now that show a potential toxicity,' said Dr Vincent Corbel, a researcher at the Institute for Development Research in Montpellier, France, and lead author of the study.

'What we have done is identify a neurological target for this compound,' he said.

In experiments, Dr Corbel and a team of scientists found that Deet causes a toxic build-up of acetylcholine (ACh), the most common neurotransmitter in the central nervous system, that ultimately prevents the transmission of signals across the neuron synapse.

A class of insecticides called carbamates, as well as the nerve gas, sarin, work in the same way, only the effects are stronger and last much longer.

Fortunately, Deet is 'reversible', meaning that its impact is short-lived. But further studies are needed to determine at what concentration the chemical compound may become dangerous to people, especially young children and pregnant women, said Dr Corbel.

Singapore has rules for repellents with Deet
Straits Times 7 Aug 09;

SINGAPORE requires repellents containing Deet to be registered with the National Environment Agency (NEA) under the control of vectors and pesticides Act.

The environment watchdog told The Straits Times that repellents used in local households contain Deet in concentrations varying from 7 per cent to 25 per cent. This falls within World Health Organisation (WHO) recommendations.

'Should the WHO revise its recommendations, NEA will study the revisions and make the necessary amendments to ensure the products are safe for public use,' it said.

The NEA also advises users to follow the instructions on the label when using a repellent.

Said Professor Hugo Van Bever, a senior consultant at the National University Hospital: 'The fact that some 200 million people use Deet-based products every year, and that no major side effects have been reported in the medical literature, indicates that it is at least relatively safe.

'However, to be sure, more studies are indicated...My advice: if you can live without it, do so.'