"Space for our Dreams": Lots of land reclamation still planned 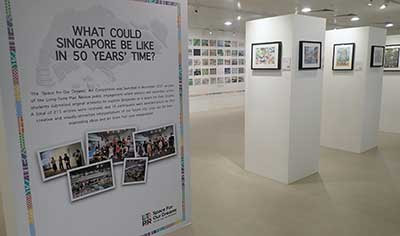 URA is seeking feedback on these plans. Send your feedback here.

Today's plans are not very different from the areas that were outlined for reclamation in the 2013 landuse plan by the Ministry of National Development released in response to 2013 Population White Paper.


There is now a new category of 'use' called 'Future Development Areas'. This is explained as follows: "In the next few decades, we will have the opportunity to develop large parcels of land marked as “Future Development Areas” for a wide range of uses, which can include housing, office, industry and others. We will review and adjust the exact mix of uses in these areas closer to their implementation, depending on how future trends pan out. These, along with the areas marked as “Reserve Sites”, will give us more room to adjust our plans to respond to a dynamic future."

There were additional details, plans for a 'Long Island' opposite East Coast Park is now official. In addition to more reclamation along that shoreline, already unveiled in 2013. 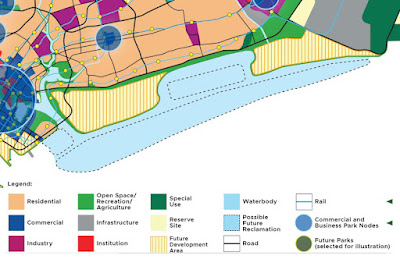 Plans for a 'long island' have been hinted at for more than 15 years. This map from Encyclopedia of Coastal Science by Maurice L. Schwartz written in 2005 shows among the future reclamation projects, a long island opposite the east coast, made up of three parts.

From the Straits Times article "Future 'Long Island' along East Coast could have reservoir and housing" 6 Jun 2022:

Plans for the "Long Island", a reclaimed island along the south-eastern coast from Marina East to Changi, could include a reservoir to boost Singapore's water supply and protect its coastline from rising sea levels.

The Long Island could also be developed for housing and be integrated with coastal parks and recreational spaces, the Urban Redevelopment Authority (URA) announced at its long-term plan review exhibition on Monday (June 6).

The URA said the Long Island - which was first envisioned as a reclaimed island for beachfront housing and leisure in the 1991 Concept Plan - is among the ideas being studied for coastal protection.

It could also have floodplains to reduce flood risks, similar to that in Bishan-Ang Mo Kio Park, according to plans for the project.

There is currently no concrete timeline for Long Island's development.

Here's a screen shot of one of the exhibition slides.

See for yourself the amazing marine life on East Coast shores before they are gone! Corals, seagrasses and other marine life have naturally regenerated on the artificial shores at East Coast Park. These shores are easy for ordinary people to explore at low spring tide. More details in "East Coast Park - Surprising intertidal adventures for the family".
There doesn't seem to be a change in 2013 plans to reclaim all of Pasir Ris, all of Changi from Carpark 1 to Carpark 7 and beyond, and reclaim Chek Jawa and Pulau Sekudu. These appear to remain in place in today's Long-Term Plan Review. Including plans for a road link that starts at Pasir Ris, crosses to Pulau Ubin, right across Chek Jawa to Pulau Tekong, and back to the mainland at Changi East. 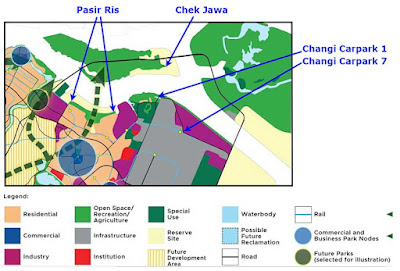 See Pasir Ris and Changi shores for yourself before it's gone! Pasir Ris shores are easy to get to, and enjoyed by many people. But it remains rich in a variety of marine life. More details in "Pasir Ris - Perfect intertidal getaway for the family" and "Changi - an easy intertidal adventure for the family".
Plans to reclaim the southern islands also remain similar in the 2013 plans and today's Long-Term Plan Review. Impacting Pulau Hantu, Pulau Jong and submerged reefs nearby. 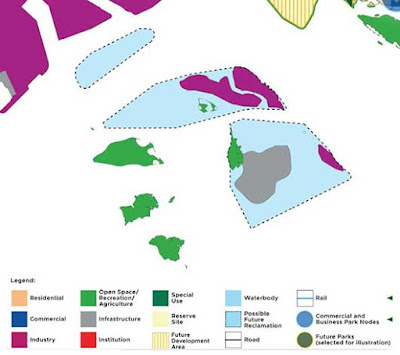 What do Singapore youths dream for the future?

From the exhibit description: "Primary and secondary students submitted artwork to express Singapore as a space for their dreams. There were 215 entries. 18 participants won prizes for their creative and visually-attractive interpretations of our future city." Maybe it's just me, but some of the images seem  rather dystopian. 'Attack of the Sea' has no description - just a tall wall and rising seas. Another depicts an iconic dragon playground with the description "even though we are building walls against the coastline, it would not help the inner part of Singapore". Yet another "Due to global warming, the world is flooded. So all the people in Singapore have to escape onto a giant ship." 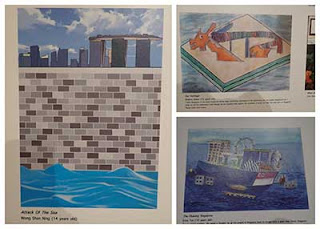 There is one which was more hopeful. With the caption "I envision Singapore's coasts with man-made sea walls laced by nature's mangroes and rich varieties of coral to beautif yet protect us from the harsh waves of the sea." 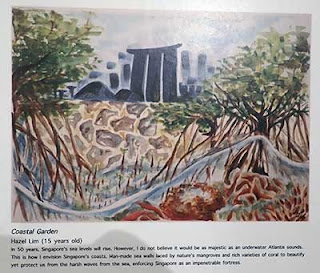 This is similar to my first response when the 2013 Land Use Plan was unveiled. I highlighted how  natural regeneration on Singapore's artificial shores and structures is already happening now. Unintentionally, with zero replanting. Can we plan coastal works to allow reefs, mangroves and seagrasses to naturally regenerate? Naturalise canals leading to the sea for a continuum of freshwater wetlands to mangroves? Imagine what's possible! Reefs and natural marine ecosystems at our doorstep, for all in the City to enjoy. More about this idea in my feedback to the Draft Master Plan 2013.

Check out the awesome videos highlighting these themes in Oceans Reimagined created by Nathaniel Soon of Our Seas Our Legacy.
The Singapore Blue Plan 2018

URA is seeking feedback on these plans. Send your feedback here.
Posted by Ria Tan at 7:09 PM