Will Chek Jawa be impacted by the non-stop rain?

The non-stop rain and reports of flooding in Johor recently made me worry that there will be a repeat of the mass death at Chek Jawa in 2007. Fortunately, during our survey of Chek Jawa on 14 Dec, we didn't see mass death, although we came across some small sea stars that appear to be dying. 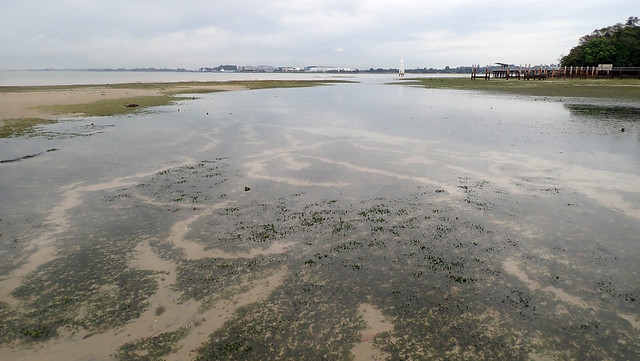 It was great to see lots of dugong feeding trails near the southern sand bar! As well as many other interesting marine life! Thanks to NParks for permission to do this survey of Chek Jawa. 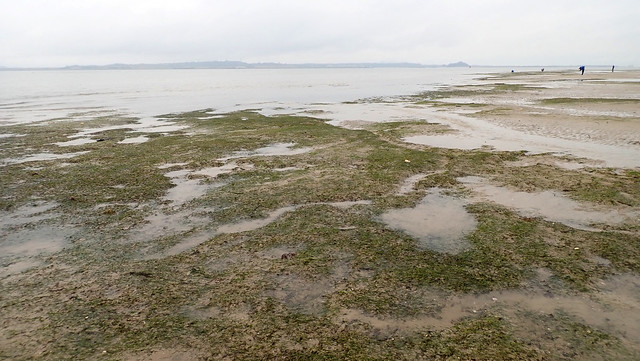 It was a relief to see many healthy Haddon's carpet anemones in the middle of the lagoon. Although some of these anemones near the southern sand bar were rather 'crunched up', none of the anemones were bleaching. There were also many Swimming anemones and many cerianthids, all looking normal. During the 2007 mass death, the prolonged exposure to freshwater caused the carpet anemones to balloon up and then burst. 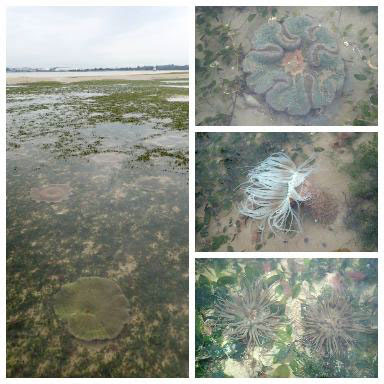 Alas, I came across fragments of an Eight-armed sea star, a small pale sea star (a Knobbly sea star?) that looked like it was dying, and a White sea urchin that looked unwell. During the 2007 mass death, all the Common sea stars (which used to be abundant on Chek Jawa) melted away and have not returned since. 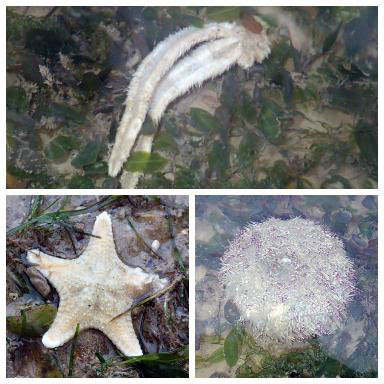 Juria and Adrianne also came across some Biscuit sea stars that didn't look well or were dying. At the same time, we also saw healthy happy versions of these same kinds of sea stars as well as Sand stars. So not all the sea stars were melting. 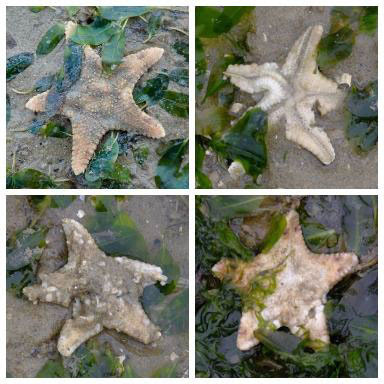 Adrianne shared this dismembered arm of a sea star, probably the Eight-armed sea star.
There were lots of Cake sand dollars on the northern sand bar. I saw many medium sized Garlic bread sea cucumbers that looked healthy. I also saw many small Pink warty sea cucumbers, some Ball sea cucumbers, while the rest of the team saw Thorny sea cucumbers too. During the 2007 mass death, many Garlic sea cucumbers lay on the surface dead and dying. 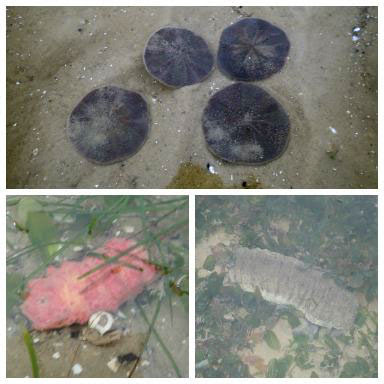 Juria saw a Grey bonnet snail, which is to be expected, as we have seen these snails feeding on sand dollars at Cyrene Reef.
Closer to the boardwalk, I saw many Fan clam shells and Window pane clams. Fortunately, we did not come across any of the clams that had taken over Changi beach recently. But there were a lot of Tiger moon snails on the  northern sand bar, and an unusually large number of Margined conch snails on the southern sand bar. 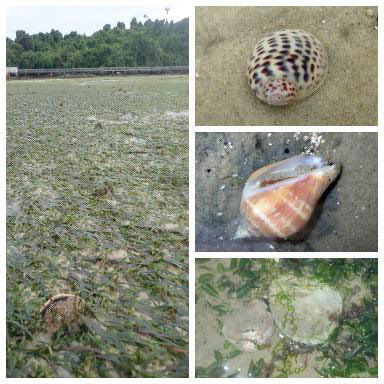 I only saw one live Button snail! I also came across one large Naked moon snail and a Black tailed slug. Here's a video compilation of these molluscs. 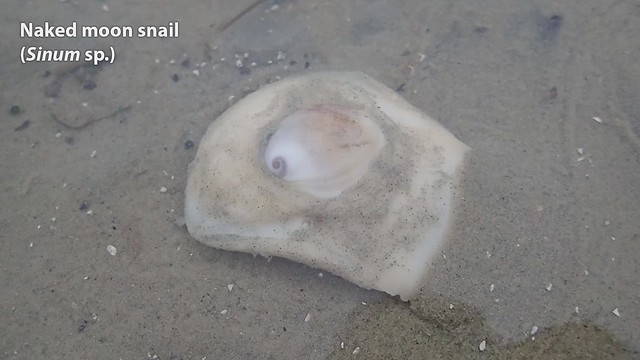 I saw their pink beehoon-like egg strings first, then later on a Spotted sea hare. 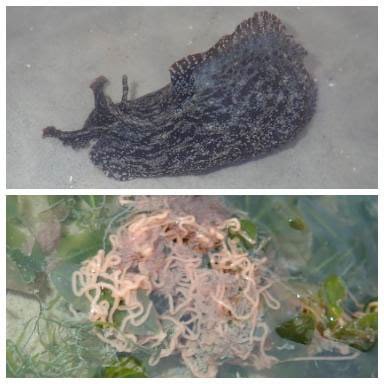 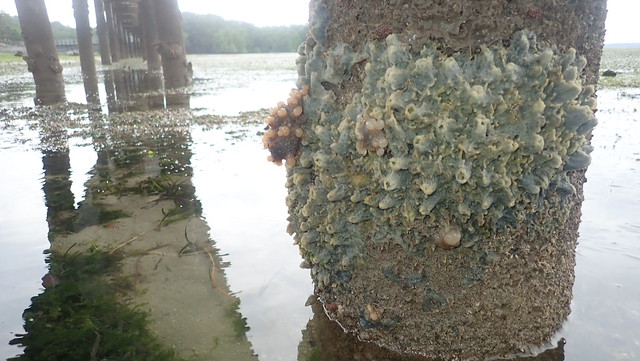 Other interesting sightings include Vincent's sighting of this snake eel, which I haven't figured out the ID for.
Juria saw this Spearer mantis shrimp that appears to be coated with slime. Not really sure what is going on.
There were lots of migratory shorebirds feeding as well as some Great billed herons. A wild boar also ambled along the shore. We kept our distance from them to avoid disturbing them. Here's a photo of some of them by Jonathan.
The floating pontoon portion of the boardwalk has been removed for maintenance and will be placed back eventually. Until they are place in place, NPark's public intertidal walks are suspended. 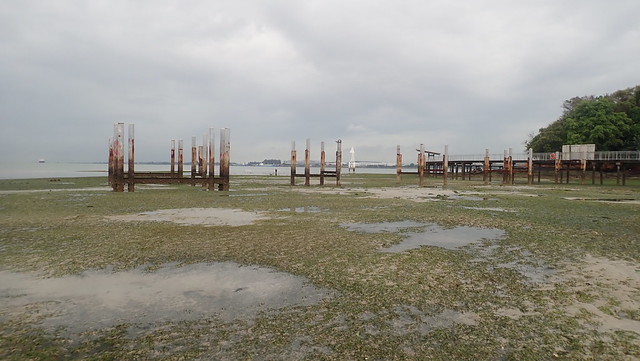 As usual, there were lots of large trash on the northern edge of Chek Jawa near the security fence. Much of the trash look like they come from the nearby fish farms. 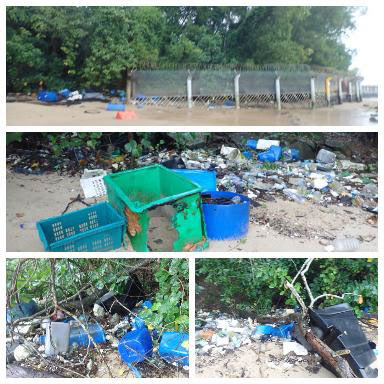 Unfortunately, the team came across a small abandoned crab trap which had a filefish and some other small animals in it. The animals were released and the trap removed from the shore. 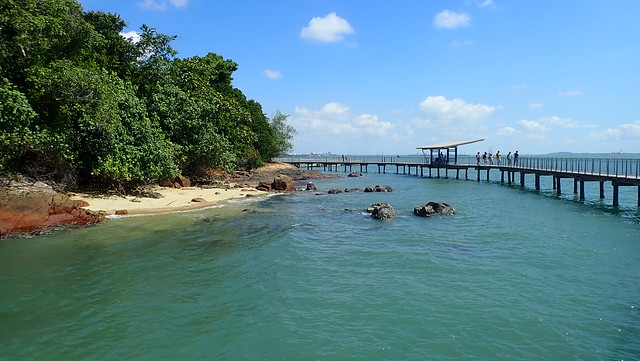