The tide wasn't very low and the weather was wet, as we headed out to survey Pulau Tekukor. 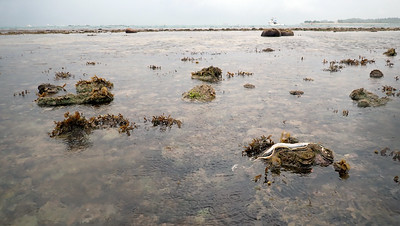 We saw two Giant clams, encountered a Yellow-lipped sea krait for the first time in years as well as other interesting marine life. The seagrasses on the shore facing Sisters' Islands are doing well, and I didn't see any mass coral bleaching.

It was great to see the huge Fluted giant clam is still there. We saw it on Nov 2017, but missed seeing it on Sep 2018. This enormous clam is about 35cm long and it was not bleaching. 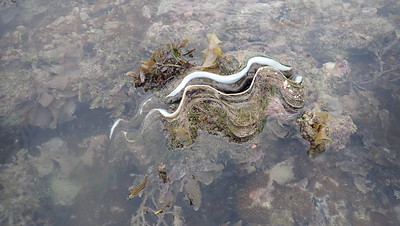 The rest of the team saw another Fluted giant clam! It is not that small (seems to be about 20cm), so it must have been there all along, and we had missed seeing it on previous surveys!
The team also spotted a small Yellow-lipped sea krait! We no longer see this snake as regularly on our surveys as in the past. Our last record sighting was by Chay Hoon at Kusu Island on Apr 2017. Let's hope the sighting today is the start of a return of this beautiful snake.
The snake has a highly toxic venom that can be fatal to humans. But it is a gentle and docile snake with tiny fangs. It will not bite unless provoked. It is best to leave it alone, although it is curious and may investigate you! How to stay safe: Wear covered shoes and long pants to cover all skin exposed to water. Don't harass, touch or pick up the snake.
Kok Sheng also shared a video of this creature. I don't know if it's a squid or an octopus! (Update: Yujie says it is not a squid as it lacks fins. It is likely to be an octopus).
There remain a lot of Frilly sea anemones on this shore! In some places, it is impossible to walk without stepping on them. There were also many Giant carpet anemones. I also saw one Haddon's carpet anemone. Alas, I didn't see any animals living in them. 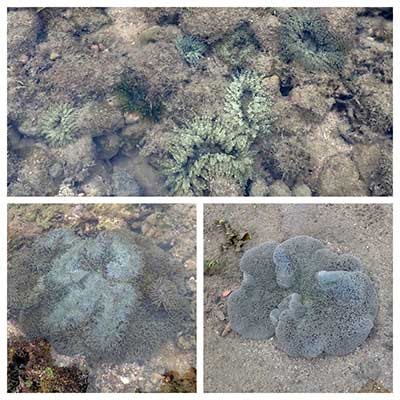 There are usually not a lot of hard or soft corals on the parts of the shore that I surveyed. It is usually reefier in the southern end of Pulau Tekukor, I didn't check that area out today. 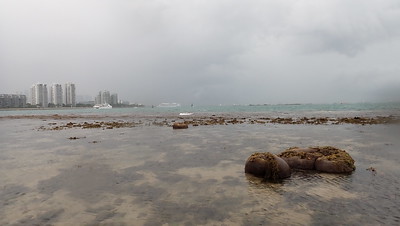 But I saw a few large hard corals and they were not bleaching. There are lots of zoanthids on this shore and I only saw one clump with pale portions. I only saw a few very small colonies of leathery soft corals. They seemed alright. 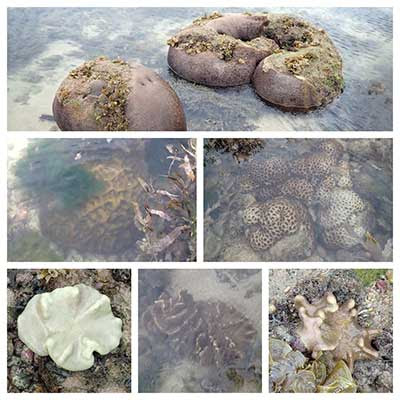 There remains a lot of Long black sea cucumbers on the shore! Today, I noticed many that were shorter and more slender than usual. 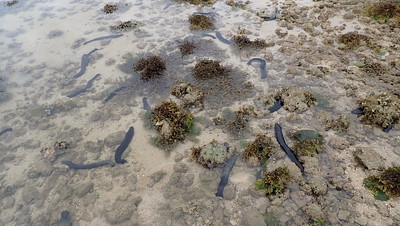 The western shore of Pulau Tekukor is part of the Sisters' Islands Marine Park. And there are good growths of seagrasses on this shore, that faces the Sisters Islands. 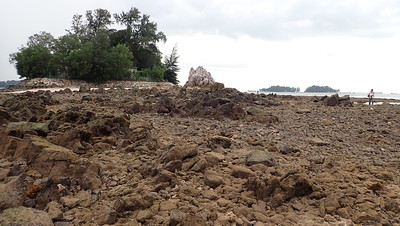 Sickle seagrass covers a large area of this shore, with fresh green leaf blades. There were also sprinkles of Spoon seagrass with small leaf blades. The seagrass situation is very similar to what I saw in Nov 2017. Which is a relief with the ongoing poor situation of seagrasses in recent years at Pulau Semakau, Terumbu Semakau and even on Cyrene. 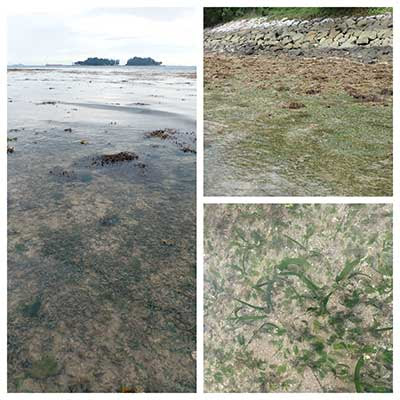 I saw one patch of Tape seagrass with long leaf blades. And it was flowering! The male flowers (tiny white things that look like styrofoam) are produced from a cup-shaped inflorescence that forms at the base of the plant. The male flower has one end that is water repellent, while the other end is attractive to water. So the flower will 'stand' upright on the water surface and even a wet finger-tip! The male flowers tend to form 'rafts' with the tiny white male flowers facing the same way. I last saw this patch in Nov 2017. 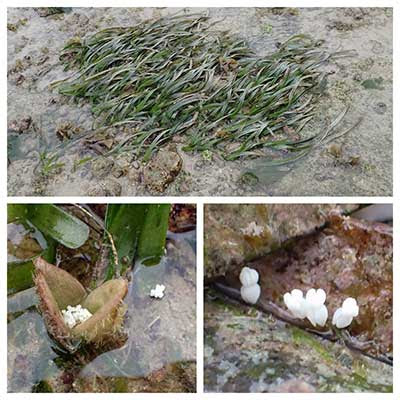 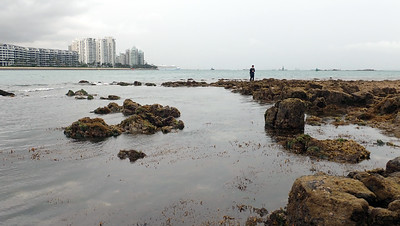 All kinds of vessels move in the narrow channel between Sentosa and Pulau Tekukor. Including ferries, and working vessels like this barge loaded with what seems to be some kind of industrial liquid. 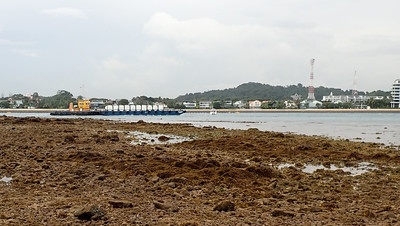 As usual, there is a narrow line of plastic floating trash on the high shore. It was disturbing to see small remnants of two red balloons on a string washed ashore. We saw a dead sea turtle here in Jun 2016 and bones of a dead sea turtle in Aug 2017. 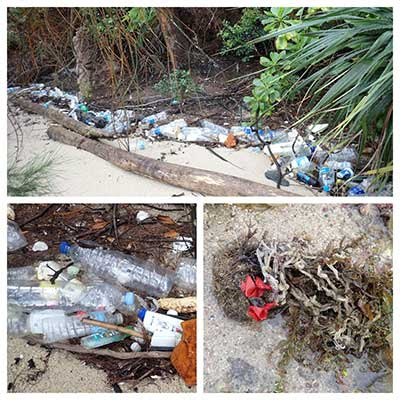 I didn't come across any fish traps on this survey. Let's hope this shore stays safe until we can return.

Photos by others on this survey:


Other shores surveyed by other people

Vincent Choo joined the NParks survey at Sentosa Tg. Rimau. Where he observed that the Tape seagrasses were also blooming.


Victor Toh checked out Changi in the rain