On one of the last morning low spring tides of the year, we land at first light on a tiny submerged reef next to Pulau Hantu. 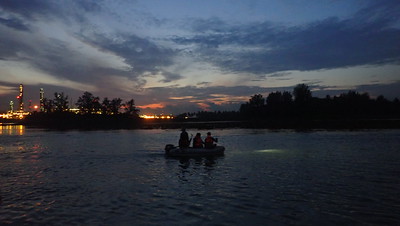 This little gem is one of our favourite sites, with lots of corals and other amazing marine life. Kelvin flew the drone and saw sea turtle, large fishes and more. 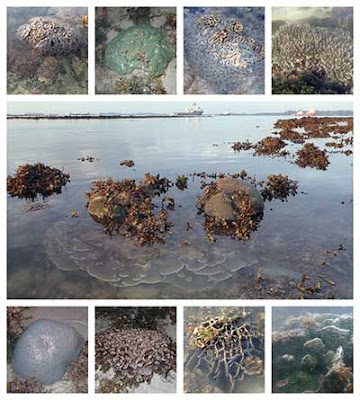 There remains a wide variety of mushroom corals here, most were large and healthy. It's always a delight to see baby mushroom corals, which grow in clusters attached to a hard surface. As they grow bigger, they detach and become free-living coral that can even move around (slowly). 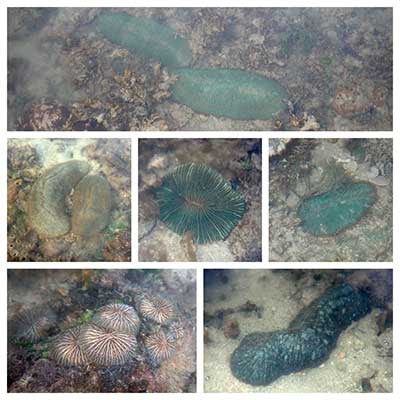 There were many leathery soft corals, mostly medium sized colonies. All those I saw seemed fine. 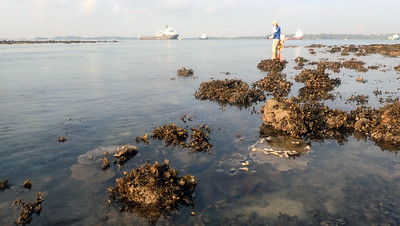 We also saw common reef life like Cushion stars (the team saw several), colourful little nudibranchs.  At the reef edge there were many Diadema urchins. Besides the many Blue-spotted fantail rays, I saw saw several large Carpet eel blennies. I also saw colourful reef crabs like the Mosaic crab and Saw-edged spooner crab. I saw one Merten's carpet anemone (it had a little male anemoneshrimp) and one Bubble tip anemone (I thought I saw a flash of Tomato anemonefish). There were also some Giant carpet anemones (Che Cheng saw anemonefishes) and Frilly anemones. Unfortunately, none of us saw giant clams. 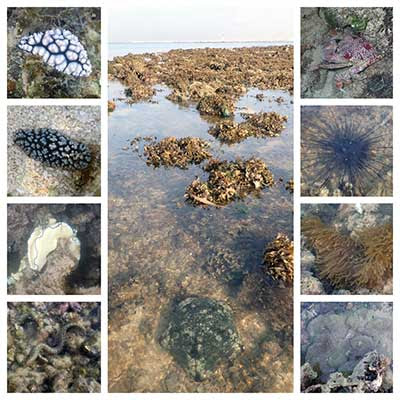 Today, the scattered clumps of Tape seagrass that I saw were mostly cropped short, similar to our survey in Jun 2018. Although team members did see some with longer leaves (about 30cm), like on our last survey in Jul 2020. 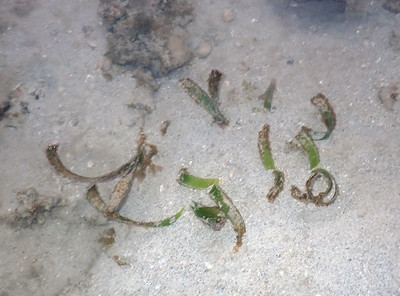 One reason we visit this submerged reef is that it has been damaged by large dive boats in the past. When these run aground on the reef, they gouge out a deep hole bare of corals. 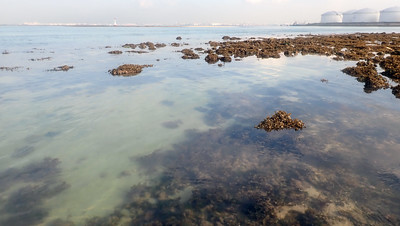 Kelvin flew the drone today and saw sea turtle, large fishes and other awesome views of the reef. 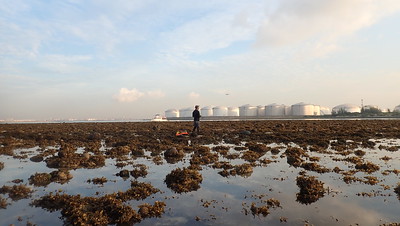 Despite being next to petrochemical plants on Pulau Bukom and surrounded by heavy vessel parking, this little reef flat still has lots of marine life. 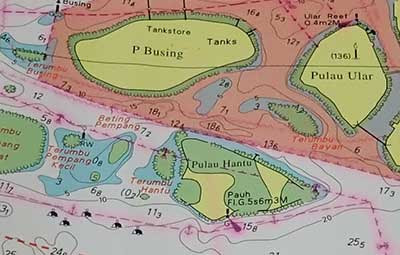 What is the fate of  Terumbu Hantu?

Pulau Hantu and all the terumbus west of it are slated for massive reclamation outlined recently in the Long-Term Plan Review. Singapore's submerged reefs are often out of sight under the high tide and thus forgotten. Let's hope Terumbu Hantu stays safe until we can visit again. 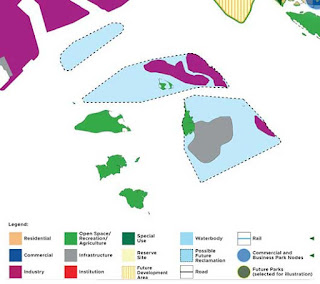 Pulau Semakau and nearby islands and submerged reefs have been recommended by the Singapore Blue Plan 2018 for Immediate Conservation Priority. The Blue Plan recommends the intertidal and subtidal marine areas of Pulau Semakau and adjacent Pulau Hantu, and Pulau Jong to be designated Marine Reserve.