Although it lies just across the petrochemical plants on Pulau Bukom, there are living reefs, seagrasses and even mangroves on Pulau Hantu. 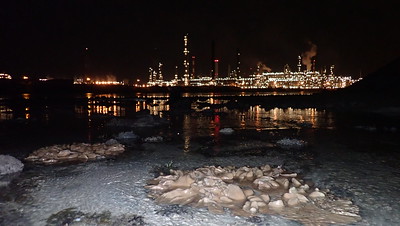 On our last survey in Jul 2020, mass coral bleaching was seen here as well as many other shores. It was thus a relief today, to see no signs of mass bleaching in the hard corals and leathery soft corals. The rest of the team saw a Burrowing giant clam.
Today, I am relieved to see many healthy, large, well-formed colonies of hard corals of various kinds. 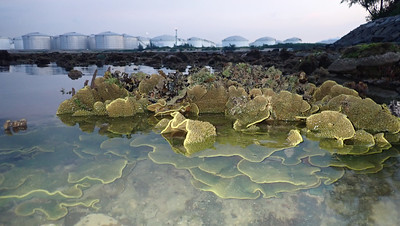 I was particularly glad to see large healthy colonies of Branching horn corals. I didn't see them on the Jul 2020 survey. 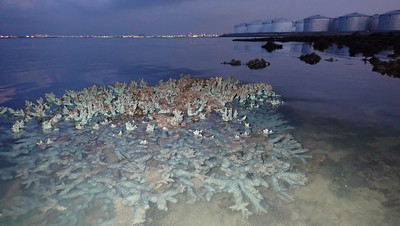 Today, I saw lots of mushroom corals of various kinds. Similar to what I saw on May 2019 and Aug 2015. So hopefully, it means the shore has gotten over the mass coral bleaching last year? 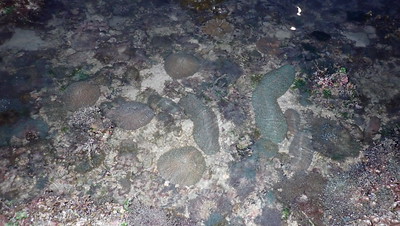 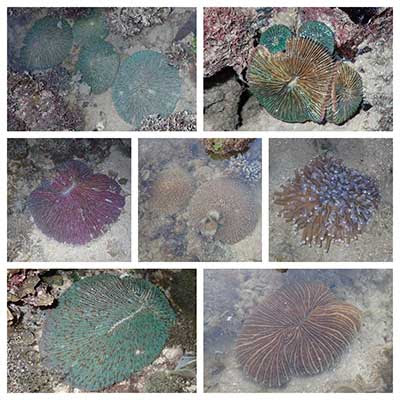 On Jul 2020, the Anchor corals were bleaching spectacularly. Today, I saw several large healthy colonies of these corals. 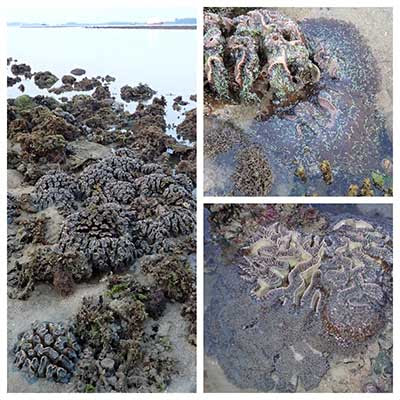 I was also excited to see some hard corals that I don't ordinarily come across: Elephant-nose coral, Boulder sandpaper coral and Ridged montipora coral. 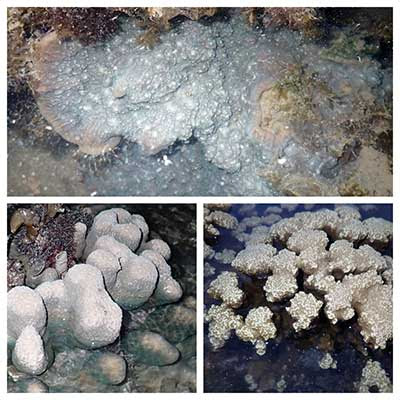 The more commonly seen hard corals were also abundant. With many large and  healthy colonies. 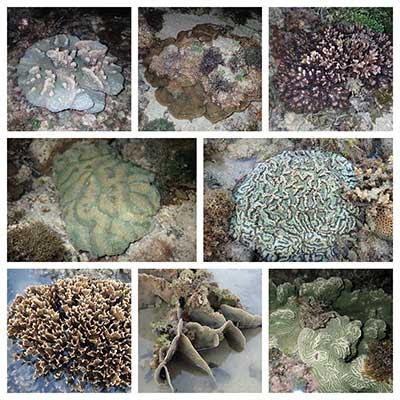 There two medium sized, healthy patches of Branching montipora near the seawall. On the reef edge, the large colonies of Anemone corals and Galaxy corals are still there, although there appears to be many dead patches. 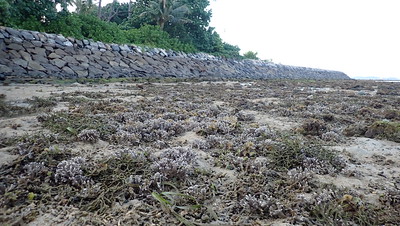 There were other cnidarians too. I was thrilled to see a Leathery sea anemone and Very long sea anemone, both first sightings for this location! I saw a few Giant carpet anemones, one with anemone fishes, and Frilly anemones were common. There was also a large Upside down jellyfish and I saw some Asparagus flowery soft corals. None of them were bleaching. The rest of the team saw Magnificent anemones. 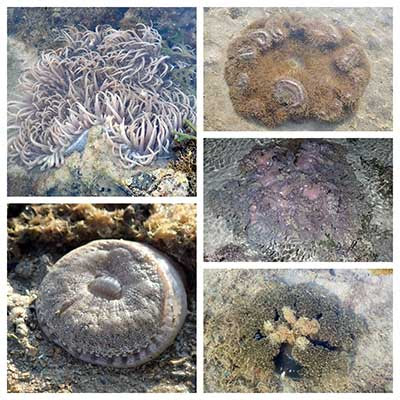 Richard Kuah saw a Burrowing giant clam!
Mangroves have settled naturally on the artificial seawall around the southern lagoon. I had earlier noticed this in Apr 2009 (although they were probably growing there much much earlier). The trees are still doing very well! There are a wide variety of mangroves including some rarer species. They were all alright, with fresh green leaves and producing flowers and propagules. This is similar to what I saw when I looked at them in Jul 2020 and Aug 2017. 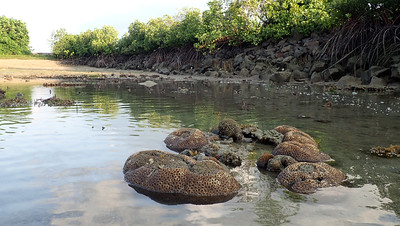 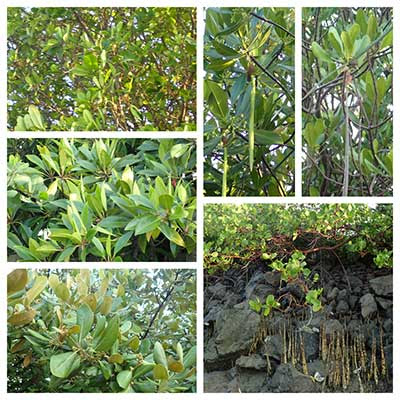 Mangrove saplings have also started to settle on the eastern seawall. I first noticed this in Oct 2014. Today, there situation seems similar to what I saw in  Jul 2020. Fewer saplings than what I noticed on Jul 2015 and the large Nyireh bunga that I saw then is no longer there. 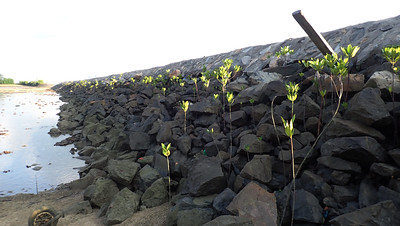 The situation with the Tape seagrasses is similar to what I saw in  Jul 2020. I saw a few small clumps with longish leaves, heavily covered in epiphytes. There were many with badly cropped leaves, the short bits sticking out of the water. There were sprinkles of Spoon seagrasses, also heavily covered in epiphytes. The situation has taken a turn for the worse as on our last survey here in May 2019, when I noticed the Tape seagrass appears sparser than before. 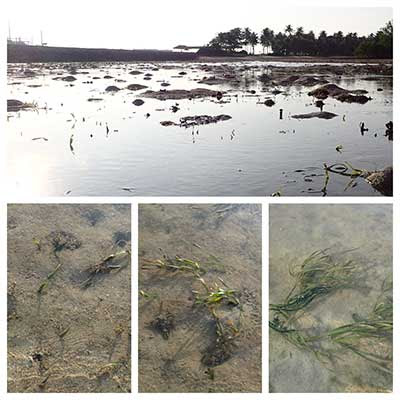 A large area at the reef edge that is bare sand, devoid of living corals or even coral rubble, is usually a sign of a boat striking the reef. 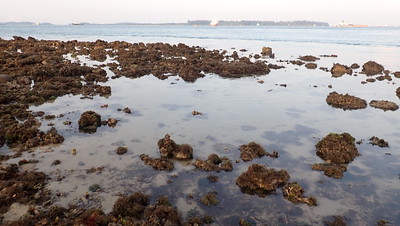 There were also many floating large plastic containers in the middle of the channel. Usually, these are markers of fish traps (bubus) in deeper water. But these could also be markers used by people who dive at Pulau Hantu. 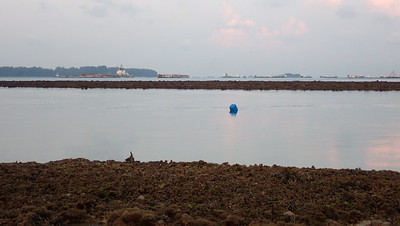 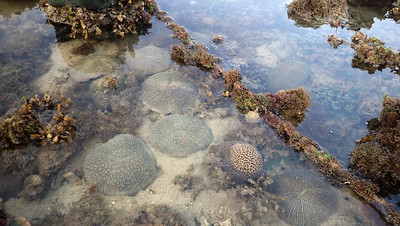 Let's hope these amazing shores remain safe until we can visit again.

The 2030 Landuse Plan by the Ministry of National Development released in Jan 2013 shows plans for 'possible future reclamation' (in light blue surrounded by dotted lines) that may obliterate Pulau Hantu. More about the possible impact of the 2030 Landuse Plan on our shores.