Dr Jani Tanzil alerted us that mass coral bleaching may have started on our shores since the second week of June. So we are on the look out for this during our annual survey of Pulau Hantu. Although it lies just across the petrochemical plants on Pulau Bukom, there are living reefs, seagrasses and even mangroves here. 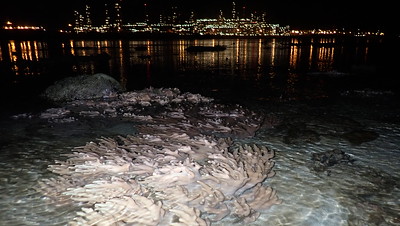 Today, I estimate about 5% of the hard corals that I saw are bleaching, with an additional 20% showing stress (paler than usual or with bleaching portions) or with recently dead patches. Some parts of this shore have large patches of leathery soft corals. About 5% of these were outright bleaching (white), while about 40% were more yellow than usual. We didn't survey Pulau Hantu during the 2016 mass coral bleaching event. It was sad to see most of the Tape seagrasses are cropped short. But the mangroves growing on the seawall were still doing well.

There are dense coral growths on the western reef outside the seawall. In some stretches there seem to be more pale and bleaching hard coral colonies. 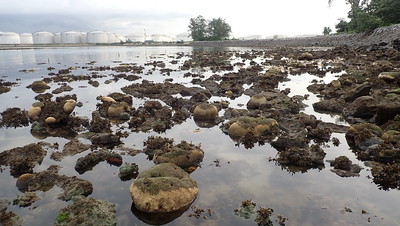 In other areas, most of the hard corals are alright. 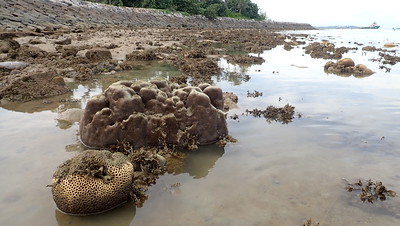 On the reef edge, there are usually two large colonies of Anemone corals. In the one with purple polyps, most of the colony seems alright. The one with green polyps, however, more than half of the colony appear dead. I couldn't find the large colony of Galaxy corals, or the big clumps of bright blue branching Horn coral that I saw our last survey here in May 2019. But this is because the Sargassum has started to grow thickly and I couldn't walk safely to look at the edge. Dayna did see some of the blue Horn corals. 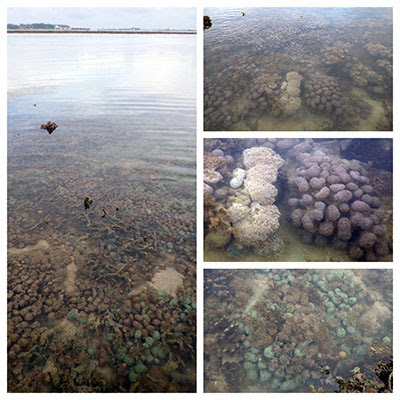 Some species of corals like the Anchor corals were bleaching spectacularly, and had portions in the middle of the colony that looked recently dead. 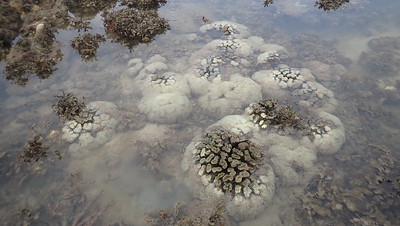 But in some parts of the reef edge, most of the large corals were alright. 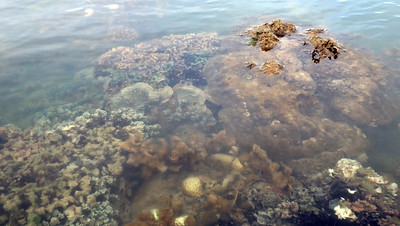 On our last survey here in May 2019, we had an overdose of mushroom corals. Today, most of the Circular mushroom corals were bleaching - glowing white even in the dark. Although there were a few that were alright. 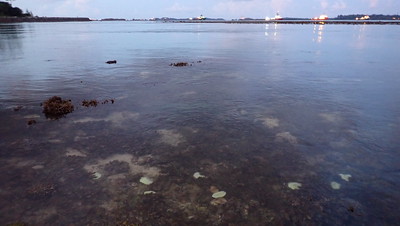 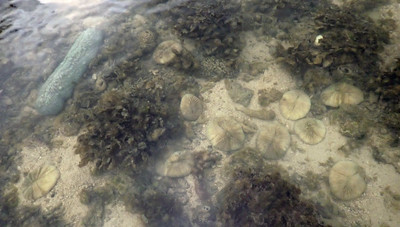 It was great to see about 5 Sunflower mushroom corals, which were all fine. But in May 2019, I saw about 20 here. Did some of them die? Or maybe they are just hidden under all that Sargassum. 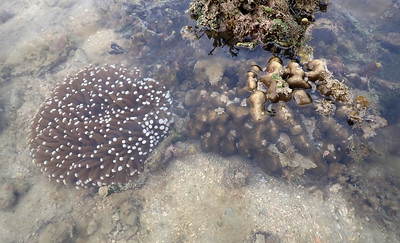 Here's a brief video of corals outside the seawall. 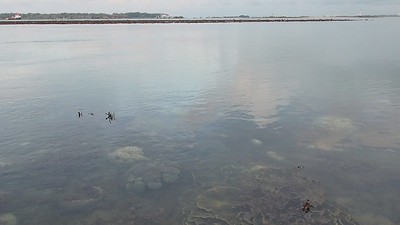 Inside the northern lagoon, some of the corals were bleaching, but many others were not. 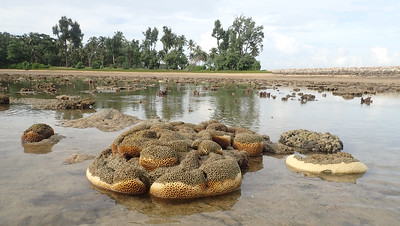 Here's a compilation of some of the hard corals I saw, with a ruler for further study by others.
There is a huge patch of leathery soft corals outside the seawall closer to the southern lagoon. Most of the colonies are very pale but not bleaching outright. 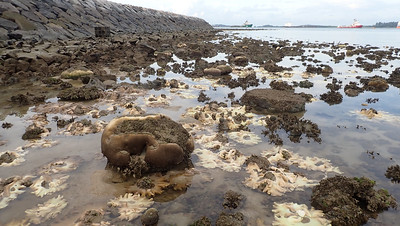 And many of the colonies had 'melted' centres, which I tend to notice with stressed leathery soft corals. Perhaps a way for them to break up into smaller colonies and hope some survive the bleaching? 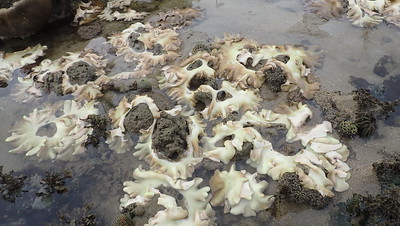 But many of the leathery soft corals are alright. With only a few with pale portions. 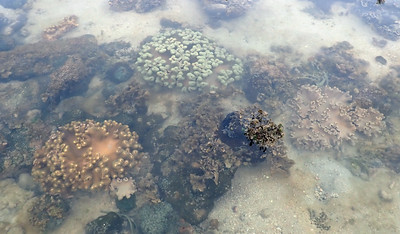 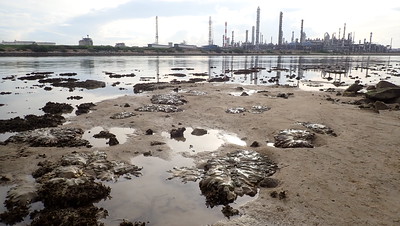 My special find was a tiny Burrowing giant clam, wedged in a huge coral colony. 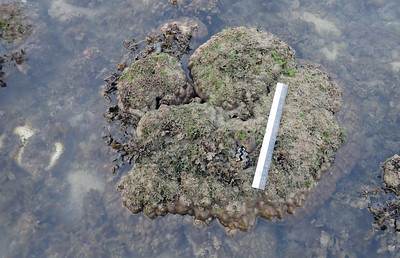 I saw many Giant carpet anemones, some with anemone fishes. Although a few were pale, most were alright. There were two small Magnificent anemones in the lagoon, both were fine. Corallimorphs I saw were fine. A few zoanthids were bleaching. Most of the Asparagus flowery soft corals I saw were pale pink or other weird colours, but none were bleaching. 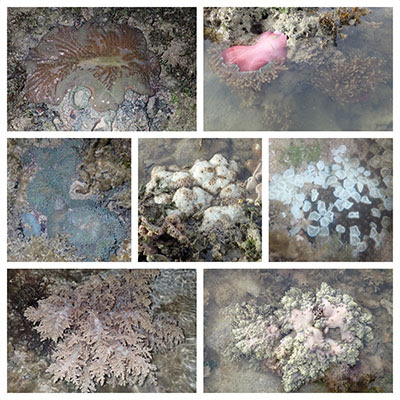 Sadly, most of the Tape seagrasses I saw in the northern lagoon were cropped short. I saw a few small clumps with longish leaves, but these were heavily covered in epiphytes. There were small sprinkles of Spoon seagrasses, also heavily covered in epiphytes. The situation has taken a turn for the worse as on our last survey here in May 2019, I noticed the Tape seagrass appears sparser than before. While I did come across cropped Tape seagrasses, most of those I saw were long. 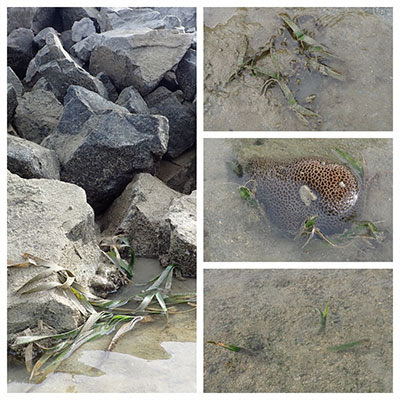 Mangroves have settled naturally on the artificial seawall around the lagoon. I had earlier noticed this in Apr 09 (although they were probably growing there much much earlier). The trees are still doing very well! There are a wide variety of mangroves including some rarer species. They were all alright, with fresh green leaves and producing flowers and propagules. This is similar to what I saw when I looked at them in Aug 2017. 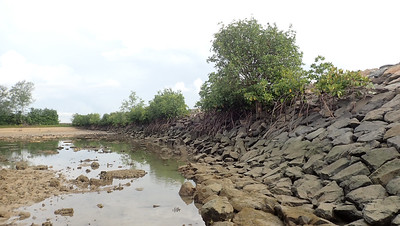 I saw a few Tengah putih trees here, producing many propagules. These are listed as Vulnerable on our Red List. 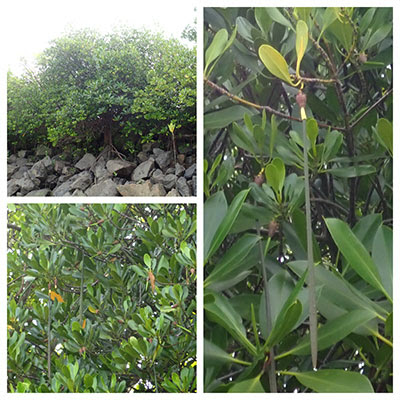 I saw many Bakau pasir which were producing many propagules. These are also listed as Vulnerable on our Red List. There were also Tumu and Bakau kurap trees. 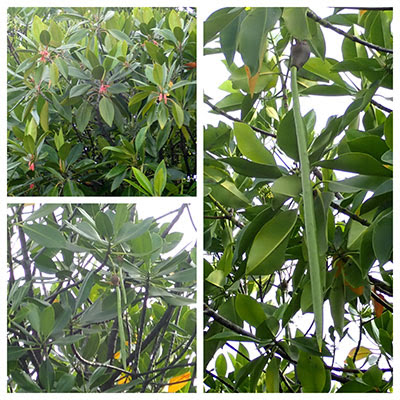 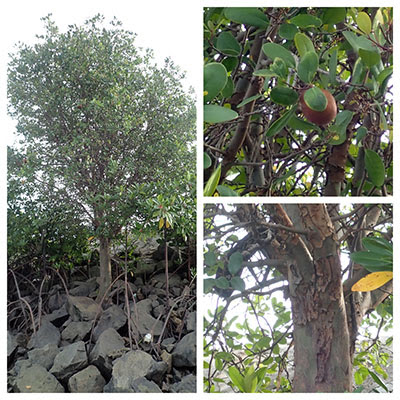 There was one tall  Perepat tree growing on the seawall, producing its typical conical breathing roots. 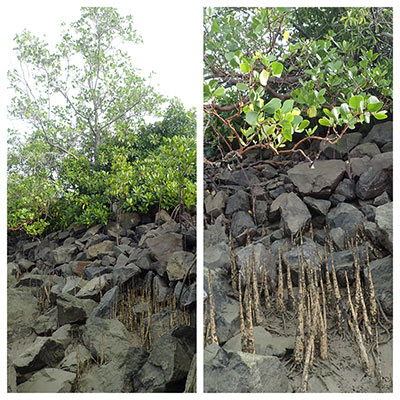 Towards the high shore, I saw one Api-api bulu and at the high water mark were several Bakau putih. 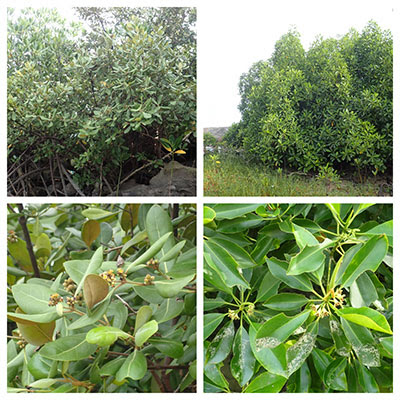 Saplings have settled on the sand around the lagoon, with a Perepat tree growing quiet large there. 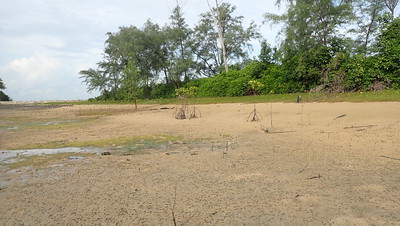 Mangrove saplings have also started to settle on the eastern seawall. I first noticed this in Oct 2014. Today, there seemed to be fewer saplings than what I noticed on Jul 2015 and the large Nyireh bunga that I saw then is no longer there. 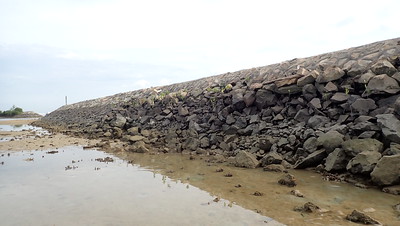 The 2030 Landuse Plan by the Ministry of National Development released in Jan 2013 shows plans for 'possible future reclamation' (in light blue surrounded by dotted lines) that may obliterate Pulau Hantu. More about the possible impact of the 2030 Landuse Plan on our shores.


Other surveys of other shores on the this day