A short boat ride from the Central Business District on the main island of Singapore, are the amazing living shores of St John's Island! 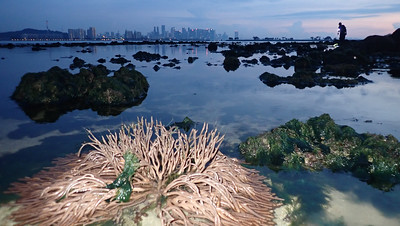 Here, there are living rocky shores, reefs, seagrass meadows. As well as rare mangrove trees on the untouched western shore, which is part of the Sisters Islands Marine Park. Things were pretty much similar to our last survey here in Oct 2020.

It was great to see Clown anemonefishes in some of the Giant carpet anemones. I also saw one in a Magnificent anemone - but it was too shy for a photograph. 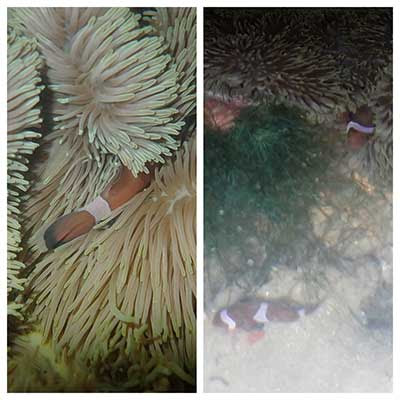 In fact, today was full of sea anemones: first sighting of Fire anemones on this shore, several Magnificent anemones (more than I have seen before in the past). As usual, many Giant carpet anemones, Frilly anemones and in the sandy lagoons, Haddon's carpet anemones. 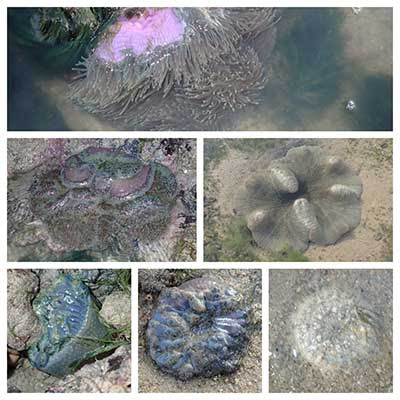 On the western shore, I came across a rock that was full of Jewelled chitons. Big ones in big holes, small ones in small holes! These armoured snails are listed as 'Endangered' on the Red List of threatened animals of Singapore. 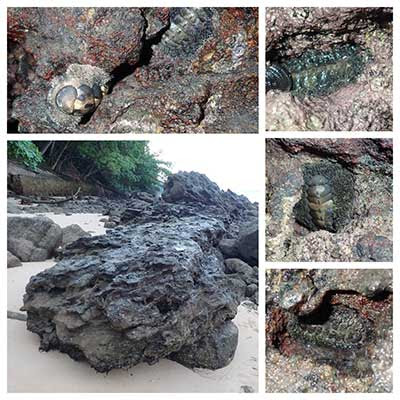 There are not a lot of hard corals on this shore, but those that were there were doing well. There were many Boulder pore corals, some were very large, and all were well formed and healthy without dead patches. 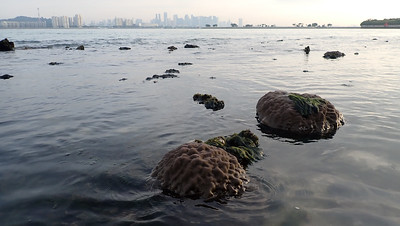 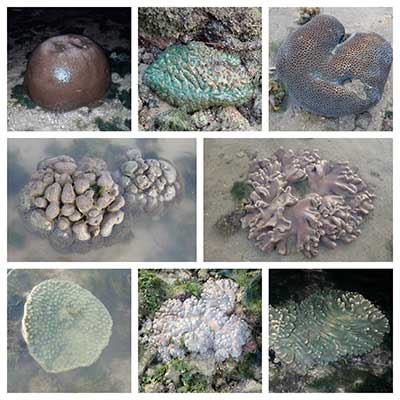 Kok Sheng also surveyed the reef edge nearer the jetty and saw lots of large colonies of healthy corals! He also saw a Hollow-cheeked stonefish.
Although we didn't see any Knobbly sea stars, today we saw the Orange sand star for the first time on this shore - it has a bright orange underside. There were also many Common sea stars and almost all of them were paired up - the male on top of the female. I also saw some skeletons of the Thick-edged sand dollar, and Kok Sheng saw a live one. 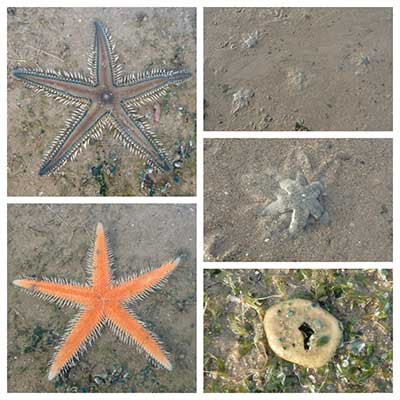 There were lush dense growths of Spoon seagrass (with small leaves) outside the seawall and in the eastern lagoons. 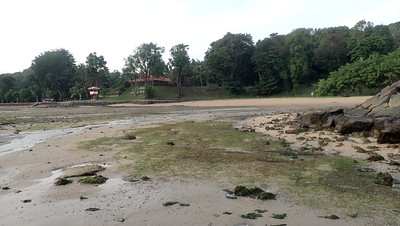 It was great to see many small clumps of Tape seagrass, most with fresh green and moderately long leaf blades, growing outside the eastern seawall. St John's Island is one of the few shores left that still has long Tape seagrass. On the rocky shores, there was also a bloom of Hairy green seaweed (Bryopsis). 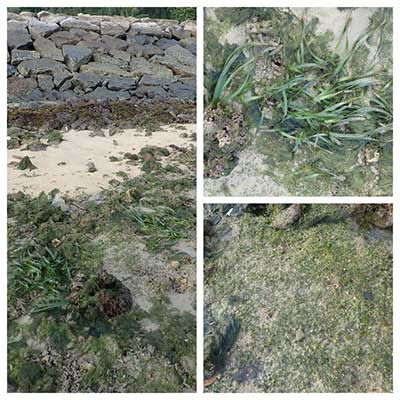 I saw good growths of Sickle seagrass on the western shore facing the Sisters Islands. Some of the leaf blades were cropped short. 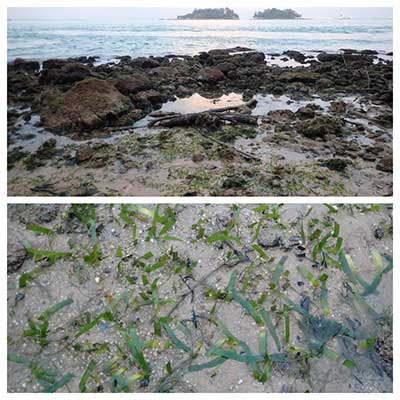 I made the pilgrimage past the tip of the northern shore. To pay my respects to the grandmother Nyireh laut tree. She is still very much alive! So are her two daughters. 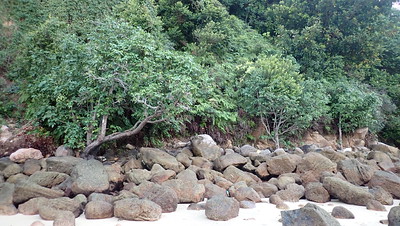 They narrowly missed being wiped out by landslides to the left of them AND to the right of them. The landslide on the right was huge. 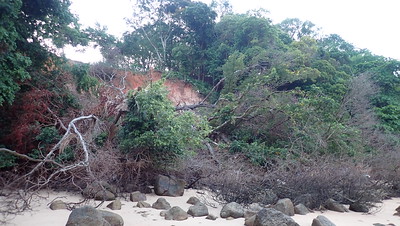 The landslide on the left not so big and doesn't seem as recent. Nyireh laut is Critically Endangered in Singapore and we probably have only about 7 trees on our shores. There are another 3 of these trees on Sentosa and in Apr 2021, I also saw that a landslide there also narrowly missed the mother tree. 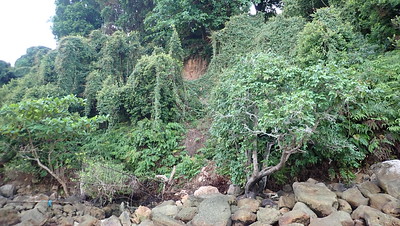 There were also large landslides on the eastern shore. One was near the Point, which has scenic natural cliffs cloaked with natural coastal forests. 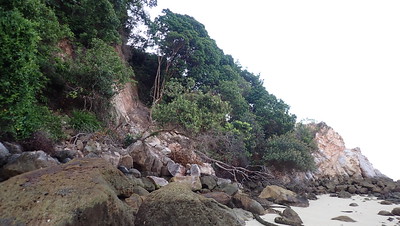 There was a large number of students on the shore (not sure from which school), they had assembled their gear and some were working near another large landslide area...oh dear. 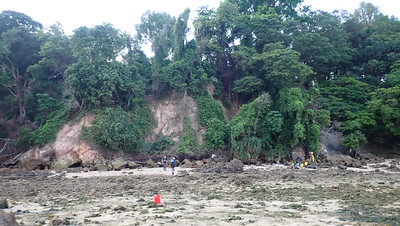 Trees that fall and float away, may also impact marine life on the shore. 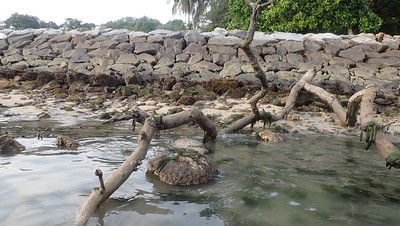 There were many people on the shore at low tide today. Almost all of them seemed to be doing some sort of study there. We didn't come across fish nets or traps today. 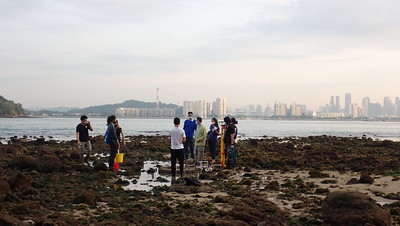 The Singapore Blue Plan 2018 highlights the importance of St John's Island to our marine biodiversity.

The cluster of Kusu, Lazarus and St. John's Islands has been recommended by the Singapore Blue Plan 2018 for elevated protection status. The Blue Plan highlights that Lazarus, St. John’s, and Kusu Islands are established sites for coral nurseries as their shoreline offers ideal sheltered areas for growth of corals. Designating these islands as No-fishing Areas can bolster their rehabilitation.

Protecting a larger cluster of islands means zonation plans for use can be implemented to manage tourism and human impacts.