Not ok to take Giant clams and shells!

A team of NUS students led by A/P Martin Henz pose proudly with Giant clam and other shells that they collected from "pristine shores in the Riaus". At first, I assumed they did so for some scientific purpose and had a permit to do so. I was appalled to learn otherwise. 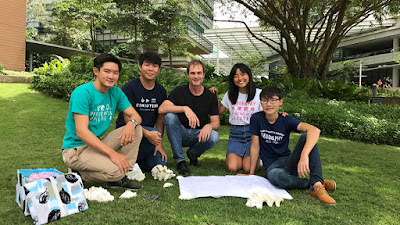 "From left: Jonathan, Darren, Assoc Prof Henz, Fangning and Jeremiah and mementos from their trip, including seashells found on the pristine shores of Pulau Gojong, their map charting "Selat NUS", and watercolour sketches of the islands." This photo was originally posted on the NUS News article but has since been taken down. 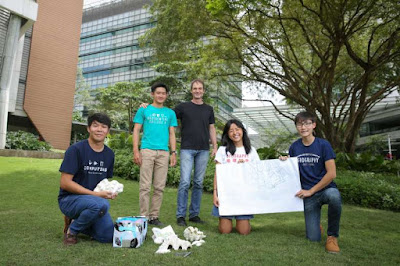 Associate Professor Martin Henz and undergraduates (from left) Darren Wee, Jonathan Yeo, Tan Fangning and Jeremiah Loke, with mementoes of their trip, including a map charting their route and clam shells from the islands they visited.ST PHOTO: ONG WEE JIN from Sailing trip taught them to love nature by Yuen Sin Straits Times 30 Jan 2017.


Prof Henz said "This has been a learning experience for all involved, and we will be more mindful of our actions in the future to not leave anything behind nor remove anything from nature."


On their facebook page, they also posted about collecting shells on a beach. 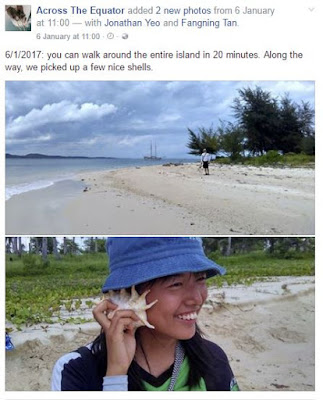 I asked on their facebook page: "Why did you have to collect the Giant clams that you found on your journey?"

Among the replies from Martin Henz, Associate Professor, School of Computing and Faculty of Engineering, National University of Singapore:


"The students were not aware of the guidelines on collection of shells and we will certainly endeavour to be more mindful of our actions in the future. This was a learning point for the students and we are also in discussion with our marine science experts to understand this better."

"I must admit that I have a dark family history with giant clam shells: Many years ago, I picked up a beautiful specimen on Tioman Island. The shell ended up as the daily joy of my parents in Germany for many years, on display in their living room.

In both cases, I tried to make sure that no animal was directly harmed in the process: The shells were not inhabited by any creatures as far as I could tell. But did I check hard enough? Debatable!

The biggest environmental impact of taking the Tioman shell to Germany was most likely the extra airplane fuel spent, carrying the thing over.

It was me, not the students, who found the shell on the beach and took it on board of our schooner."

"Yes, I know that I am guilty, and worst of all, the evidence of my guilt has been copied thousandfold this morning in the ST printing presses, and was then distributed all over Singapore! Just wanted to make sure that it's me and not the students, who gets charged. On the positive side, we now know the law and will make sure we will not violate it on future voyages.

I didn't not claim here that it was a good thing that we removed the clam shell. Indeed, it was a bad thing. We should not take things from nature. Even if (as I think the case here) no actual physical harm is done, the signal sent to the public is a bad one. It's just wrong to take stuff from nature and bring it home as a souvenir.

Regarding the paper on the Iberian Beaches: Conditions are vastly different. None of the arguments apply in the case of Pulau Gojong."


What is the harm of collecting shells found on a beach?

The paper referred to by Martin Henz came up because someone on the thread asked if there was any environmental damage associated with the collection of giant clam shells?

In reply, links were provided to a study "Vanishing Clams on an Iberian Beach: Local Consequences and Global Implications of Accelerating Loss of Shells to Tourism" and a Guardian article on this study "Leave seashells on the seashore or risk damaging ecosystem, says study". Highlights of this article include:


In a study more than 30 years in the making, researchers have found that the removal of shells from beaches could damage ecosystems and endanger organisms that rely on shells for their survival.

Seashells are an important part of coastal ecosystems: they provide materials for birds' nests, a home or attachment surface for algae, sea grass, sponges and a host of other microorganisms. Fish use them to hide from predators, and hermit crabs use them as temporary shelters. The removal of large shells and shell fragments also has the potential to alter the rate of shoreline erosion.

Giant clams are particularly at risk in our part of the world. As highlighted by Alvin Wong on the thread:


"Giant clams are already systematically poached in SEA waters. So imagine if every tourist, diver, sailor start to pick or buy Giant Clams. Very soon this very important member of our coral reef community will be wiped out like the Dodo. As an NUS Biology graduate, I used to hear our NUS Zoology staff, Oi Yee telling us about our Department field trips to Pulau Tioman in the 1960s. At that time, you can still see Giant Clams off the main Tioman beaches. Our own NUS institution, TMSI is involved in conservation of Giant Clam. You guys should learn more about the marine env from our own NUS faculty before embarking on such sailing trips, esp about what to do and what not to do. This will enrich your educational experience."


In addition, Indonesian Law protects some species of Giant Clams even when they are dead with serious penalties including fines and imprisonment for collecting them. From "Large-Scale Trade in Legally Protected Marine Mollusc Shells from Java and Bali, Indonesia"

"This was consolidated into Act of the Republic of Indonesia No. 5 of 10 August 1990 concerning the Conservation of Living Resources and their Ecosystems (Undang-undang Republik Indonesia No 5 tahun 1990) and Regulation 7 concerning the Preservation of Plants and Animals of 27 January 1999 (Peraturan Pemerintah No 7 tahun 1999). Act No 5 states that: “Any and all persons are prohibited to (a) Catch, transport, and trade in a protected animal in a live condition; (b) Keep, possess, transport, and trade in a protected animal in a dead condition; (c) Transfer a protected animal from one place to another, within or outside Indonesia (d) Trade, keep or possess bodies, or other parts of a protected animal or the goods made of parts of the animal, or transfer from one place in Indonesia to another, within or outside Indonesia”. Penalties that can be imposed when these laws are broken can total fines of up to IDR 100,000,000 (~USD 10,000) and imprisonment for up to five years."

I suggested to Martin Henz in the thread: "Since you said your students are not aware of the guidelines, you may wish to consider signing them up first for outdoor ethics training before embarking on a journey? One such programme is "Leave No Trace". They have an online awareness course. Better Trails in Singapore is a social enterprise that conducts "Leave No Trace" training.

I am rather shocked that something basic like "Take nothing and leave nothing" was not practiced on a trip that is touted as creating "a renewed perspective on nature and the environment".

Did NUS vet the programme and processes?

According to the Straits Times article, the trip was subsidised by NUS and students had to top up at $400 per person.

Let's hope that these issues are sorted out so that students learn and practice ethical behaviour on such programmes in the future.


Update March 2017: It appears PA/P Martin Henz and his students got an indepth look at marine conservation and giant clams from their colleagues at the NUS St. John's Island National Marine Lab.

"Some of our voyagers and their USP friends visited the St. John's Island National Marine Lab on 24/2/2017. We were lucky to get a SJINML overview talk by Director Serena Teo, a guided tour by marine biologist Chua Sek Chuan, and (the highlight) a talk on Giant Clam conservation by Giant Clam expert Dr Neo Mei Lin. Mei Lin also showed us the Giant Clam hatchery of SJINML."


This trip was also posted on the BES Drongo blog.
Posted by Ria Tan at 11:01 AM