For the first time in 2 years, we survey the northern corner of Pulau Semakau near Pulau Hantu and Pulau Bukom. It has a rich reefy edge. Our last survey was in Jul 2020 when there was a bit of mass coral bleaching. We didn't survey in 2021 due to COVID restrictions. 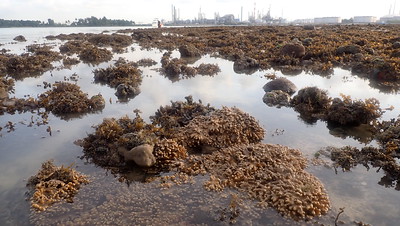 Today the corals were doing very well, lots of healthy well formed hard corals, plenty of large Leathery soft corals. Also anemones and other special marine life like a Tiger cowrie. There were also sea turtles and sharks in the water!

The reef edge was very rich with many well formed healthy corals, some colonies were large. Including some kinds which are not often seen on our shores. 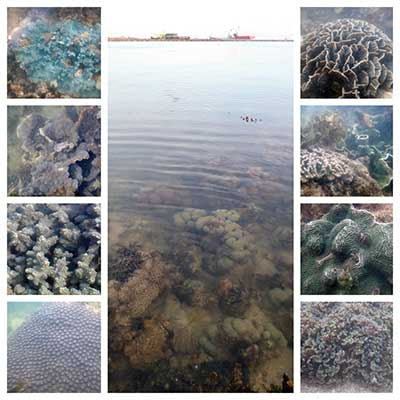 I saw lots of different kinds of mushroom corals at the reef edge. All healthy in lovely pastel shades. 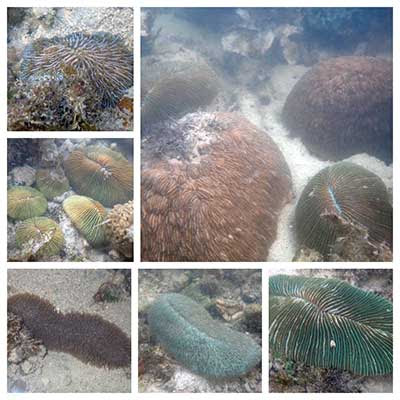 I saw many large leathery soft corals (on our Jul 2020 survey I only saw small ones). 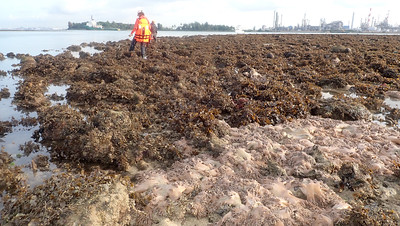 Today, there were many anemonefishes in Giant carpet anemones as well as the Magnificent anemones with bright yellow bodies. There were many Frilly anemones, I saw two Fire anemones and one Bubble tip anemone. I saw the two Leathery sea anemones that are found here, but not the Merten's carpet anemone that Kok Sheng spotted in 2020. 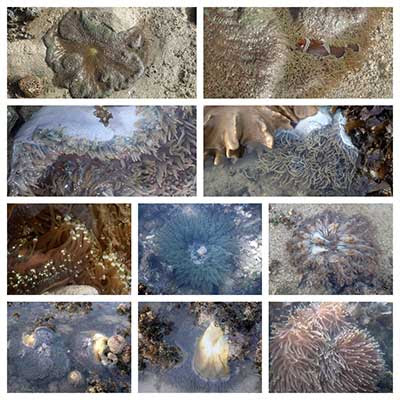 The star find of the day was the Tiger cowrie! Found by Kok Sheng. We also saw many Cushion sea stars - with arms that are very short, and puffy pillow-like bodies. I saw a Halloween flatworm and the usual nudibranchs commonly seen on our reefs. Also lots of Blue-spotted fantail rays, a little school of Razorfishes and there were many small Black-tipped reef sharks swimming at the water's edge. 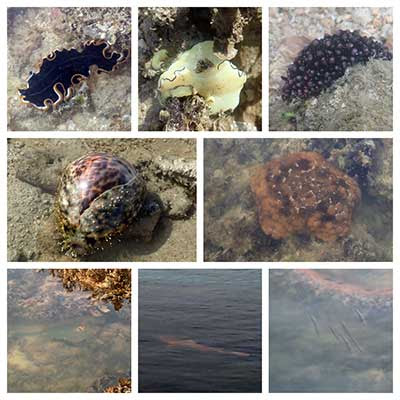 The rest of the team spotted one Fluted giant clam, but the big one at the mouth of the stream was dead.

Kelvin flew the drone and captured sightings of large needlefish and other large fishes swimming next to the reef edge. Check out his YouTube channel for more drone videos.
The seagrass situation does not appear to be very different from what I saw at our last survey in Jul 2020 and Jun 2019. The TeamSeaGrass Site 2 stakes are still there! But there are still virtually no seagrasses at the Site - just scattered Tape seagrass cropped to about 30cm long. I saw sparse sprinkles of various common seagrasses along the mid-water mark. I saw many scattered clusters of longish Tape seagrass (about 30cm) both the old seagrass areas as well as among the reefier edges. There are also good but sparse seagrass growth nearer the reef edge at the northern most point. 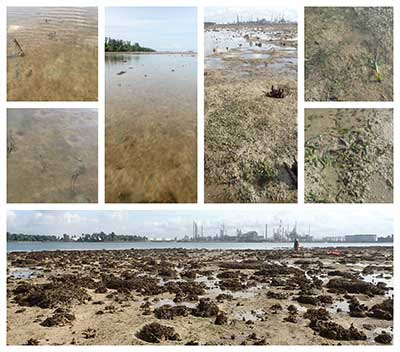 This is what the Site used to look like in 2010 just before the seagrasses started to disappear. 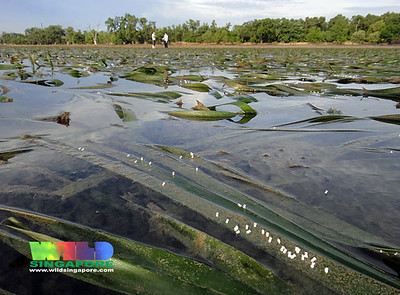 Pulau Semakau is NOT the Semakau Landfill 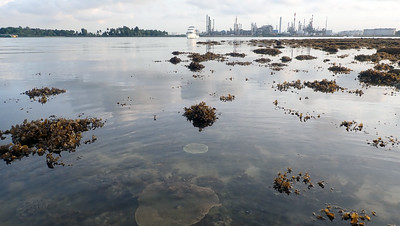 Others on this survey: Nicholas Yap
Posted by Ria Tan at 5:44 PM