Some recovery at Beting Bronok?

Our annual survey to this reefy northern flat is bitter-sweet. Like visiting our favourite grandma and watching her painfully, slowly fade away. I feel privileged to have seen her at her best. 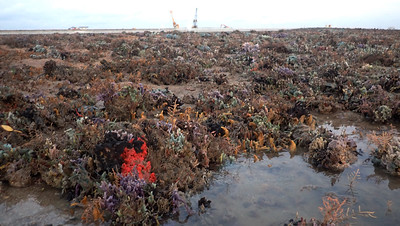 The patch rich with delicate colourful animals is still there. Despite the ongoing reclamation works on Pulau Tekong, today, it seems more lively. Seagrasses are even more abundant as much of the shore has become very soft and silty. The team saw lots of nudibranchs, large sea stars and other marine life.


There is small reefy patch on Beting Bronok where sponges, sea fans and other colourful animals grow. 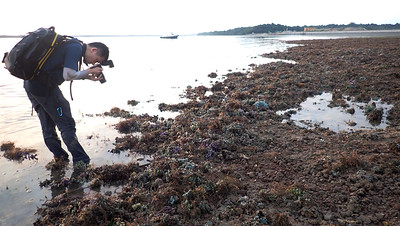 While Yellow bumpy sponges were still the most abundant kind, today I saw a wider variety of sponges, which were larger and 'fresh and clean' of sediments.  I no longer saw large areas heavily coated in Melted chocolate sponge. 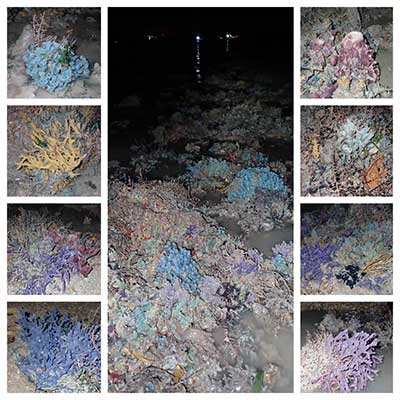 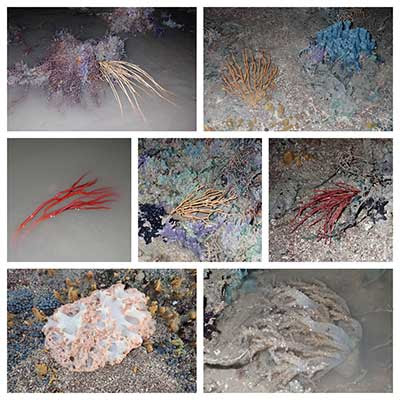 This shore used to be rich in echinoderms. These seem to be fading away. It seems every year, we see fewer and fewer echinoderms. Today I saw one Biscuit sea star, one small Cake sea star, while Kok Sheng saw a few Knobbly sea stars and one Red scaly sea star. I saw a few Orange sea cucumbers. We saw no sea urchins. In the soft silty areas some sea pens, various cerianthids, one Glass anemone. I also saw a Snaky sea anemone (it looked stressed) and healthy Haddon's carpet anemone. I saw one Cuthona nudibranch, while the rest of the team saw many different kinds. 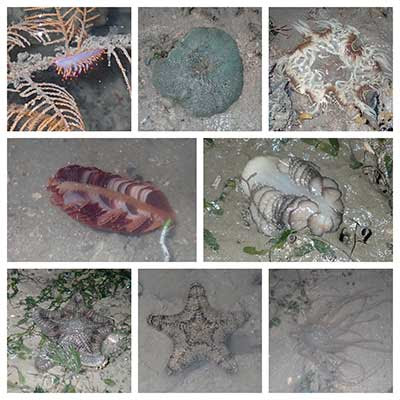 The rest of the team saw a wide variety of nudibranchs and sea anemones. As well as two seahorses, one brown and one yellow.
Today at Beting Bronok, I saw about 20 small to medium sized Boulder pore corals. Most were healthy brown, some had pale portions and onlye one was outright bleaching. 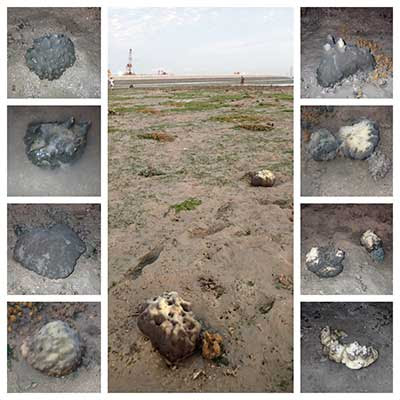 Seagrasses continue to grow on large areas of Beting Bronok nearer Pulau Tekong, where a deep layer of sediments have settled. Spoon seagrasses (large leaf blades) grow lush and fresh and green (no epiphytes) on most of the southern parts of flats. I have seen this since Jun 2018. I also came across sprinkles of Hairy spoon seagrass in the centre of the flats. I did see small patches of them too since Jun 2018. Sponges, Ball flowery soft corals, cerianthids, Fan shell clams were seen among the seagrasses. 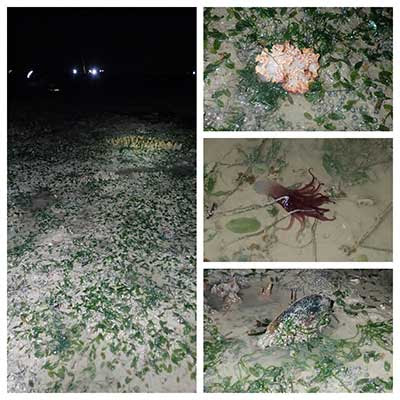 Throughout our predawn survey to sunrise, work was continuously happening on the seawall around Pulau Tekong. Yet, the marine of Beting Bronok persists. 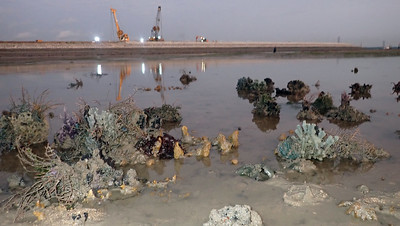 A large flock of Storks started feeding in the shallow area near the seawall at sunrise.
The reefy patch was in much better shape today. 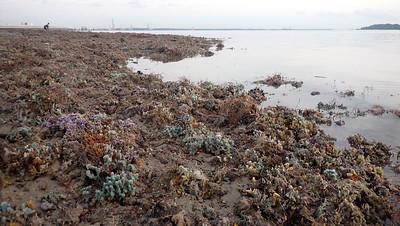 Compared to what we saw on our last survey in Jun 2021.

Over the years, this reefy patch seems to wax and wane. But Beting Bronok remains a pale shadow of itself. This is what the shore looked like in years past...

Here's what Beting Bronok looked like ten years ago in 2003.


There used to be a wondrous variety of sea fans.

Here's more old photos of marine life at Beting Bronok. Lost forever probably are the wonderful Sunflower mushroom corals and other corals that we used to see here.

Where is Beting Bronok? What is its status and future? 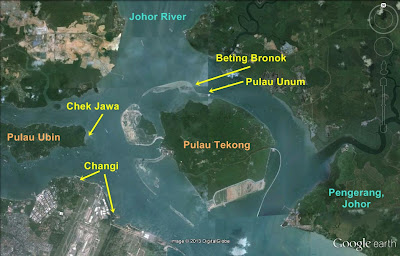 When the 2030 landuse plan by the Ministry of National Development was announced, it was also announced that Beting Bronok and Pulau Unum have been granted 'Nature Area' status. As I understand it, this status means the area "will be kept for as long as possible until required for development". Here's an earlier about 'Nature Area' status seem to mean.

To me, Beting Bronok seems to be in steady decline since the reclamation started at nearby Pulau Tekong . It has since also been affected by the flooding that led to mass deaths at Chek Jawa in 2007, and the coral bleaching in 2010 and a ferry ran aground on Beting Bronok in Jul 2011. Development of Pengerang Johor for a petrochemical complex that was rejected in Taiwan for environmental and health reasons can also impact Beting Bronok. 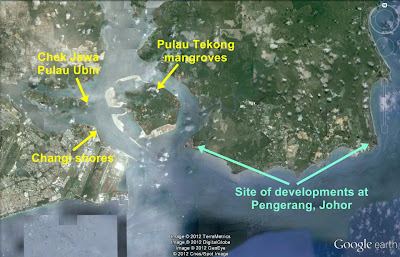 Now, with massive reclamation at Tekong, we can only hope for the best for this wonderful reef on our Northern shore.


Others on this survey: Vincent Choo.