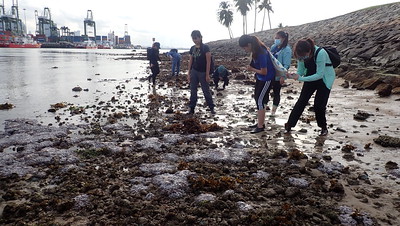 I can't survey and guide at the same time. So I am grateful some volunteers could focus on surveying. Their photos are below. Thanks also to SDC for being such good sports during the walk, and for supporting our surveys through all the years!

My overall sense is some improvement to my last visit in Jul 2021, when I was also guiding and not surveying. While there are still fewer live hard corals than before the Big Dying that we observed in Jun 2018. It was a relief to see from Richards's photos that the large colony of Acropora coral near the beacon is still doing well.
In the area facing the spillway, there are now many clumps of Branching montipora on the higher shore. The Cauliflower corals have returned in numbers on the lower shore - they died out in 2018. We also came across two large colonies of Anemone coral, one was very healthy, another had about 20% dead patches. I saw a few medium-sized Barrel sponges, while the team saw large ones in deeper water - these suffered badly during the Big Dying. 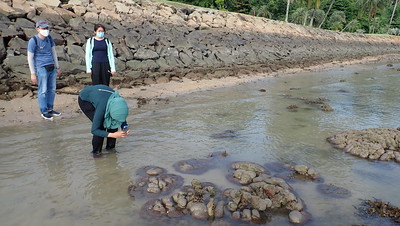 There were, however, still many leathery soft corals of various kinds, some were quite large. 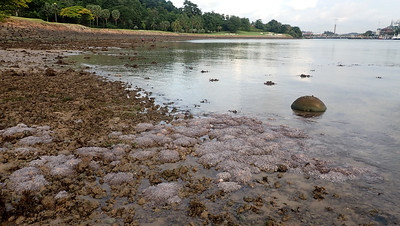 The sharp-eyed visitors spotted a Giant reef worm, an Arabian cowrie. We also saw some huge Giant top shell snails and there remained a lot of Red feather stars. We also saw many Giant carpet anemones, one had Peacock anemone shrimp. The rest of the team spotted nudibranchs and other interesting animals too. Here's a montage of some of Tammy's finds. 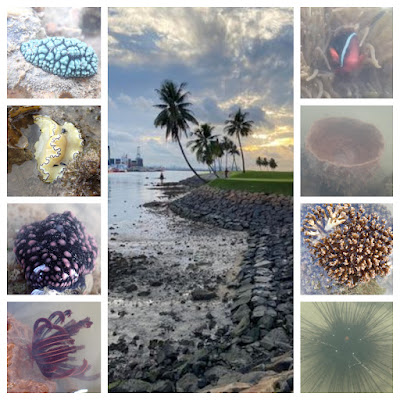 We caught up with the surveyors towards the end of the trip, where they showed us the Tomato anemonefish that they found in a Bubble-tip anemone. Tammy took a great underwater video of it. There were also many large Diadema sea urchins there.
The two clumps of Tape seagrass that I saw had cropped leaves (but not cropped very short), but both had recently flowered (female). There were also sprinkles of Spoon seagrass all along the shore. 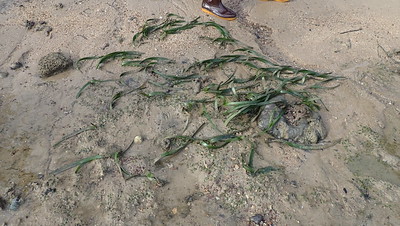 There are large stretches of  bare sandy shore now. At the old jetty, the marine life was not diverse. And we couldn't find the Fluted giant clam. 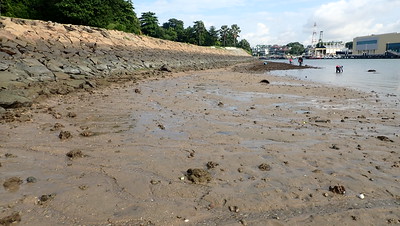 Thank you once again to SDC and Serapong Golf Course for supporting our annual surveys and for looking after these precious shores!


Photos by others who surveyed the shore


Others on this survey: Vincent Choo.