Small Sisters in the dark

A small team surveyed Small Sisters Island in the dark. The animals are usually more lively at night! 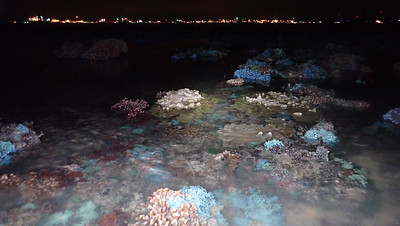 These shores remain very much alive!

On a night trip, it is easier to spot fishes (though difficult to photograph them with a little camera). The pools left behind by the tide are teeming with Silversides, Damselfishes like the Bengal sergeants, and lots of little gobies everywhere. On the water surface, there were many Halfbeaks. 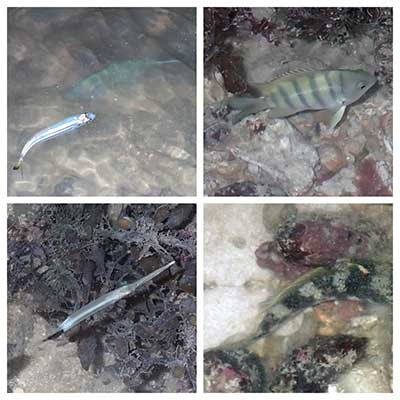 My special fish find was this large one (about 10cm long) that looked like a mudskipper. But I think it's a kind of Rockskipper blenny. 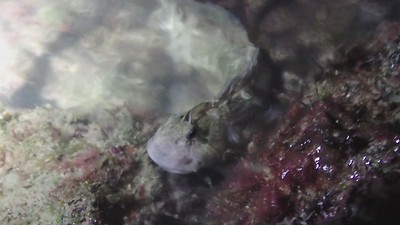 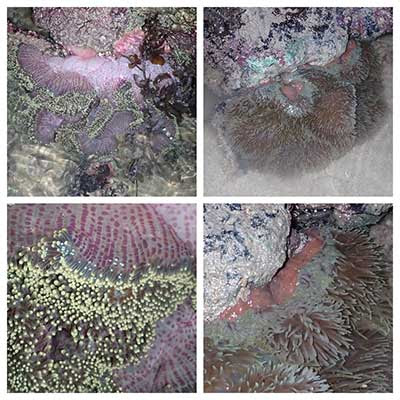 Jianlin saw anemonefish in one carpet anemone.
There are lots of crustaceans on the shore, although many are well camouflaged. Like the Velcro crab that chooses living animals and carefully attaches them to its body covered in hooked hairs. The Brown egg crab is hard to spot, while the Red egg crab is not. I was surprised that a Sally lightfoot crab that usually forages out of the water scuttled into the water right in front of me. I also saw a Saron shrimp which is fat and elaborately patterned. 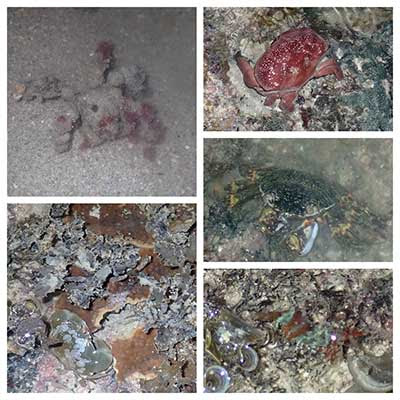 It was nice to see the usual animals found in reefs. Like the Arabian cowrie, large Barrel sponges and other sponges. Also several flatworm. Red feather stars remain common here. And there was also a Leathery sea fan.  Black long sea cucumbers remain abundant on the shores. Alas, we couldn't find any Giant clams today. At sunrise, I could hear the Spotted wood owl calling from Big Sisters Island. The rest of the team shared lots of interesting sightings in their photos (below). 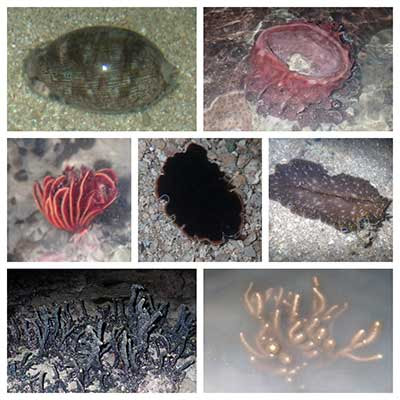 Kok Sheng saw a large lobster!
There are and have never been a lot of hard corals on the intertidal of this shore. Today, I saw many well formed colonies of common boulder shaped corals. Including some very large colonies at the reef edge. Near the jetty, there were many colonies of healthy Cauliflower coral, many with the Red coral crabs that are usually found in these corals. I also saw one Acropora coral, and the large Mole mushroom coral is still there - I last saw it on our survey of Aug 2020. I didn't come across any mass coral bleaching. 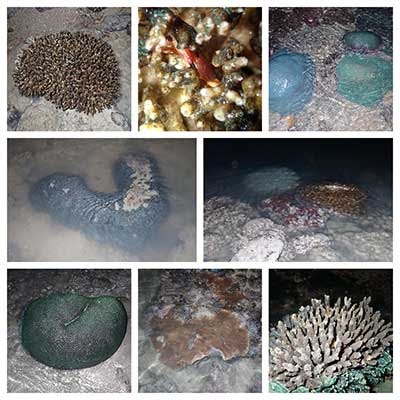 There were many medium-sized leathery soft corals, especially in the small lagoon. They were also not bleaching. 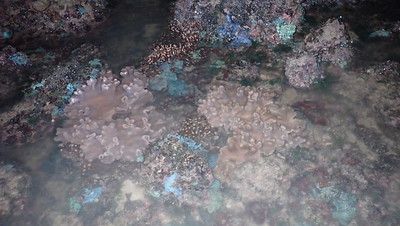 In the larger lagoon, the sandy areas were sparsely sprinkled with Spoon seagrasses (tiny leaved). I saw the Remarkable sea cucumber (my first sighting for this location). There were also some large Cake sand dollars, a few large Common sea stars. As well as many Oval moon snails and moon snail sand collars (their egg masses). 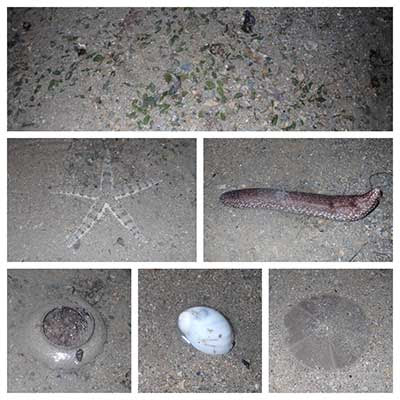 Kok Sheng saw some Tape seagrass!
The two Sisters Islands are now designated as a Marine Park and managed by NParks. While Big Sister's Island is open to the public, Small Sister's Island is closed to visits and set aside for research. Our survey today was done with permission from NParks. More about the Sisters' Islands Marine Park on the blog and facebook page.
Photos by others on this trip
Jianlin Liu