A small team surveyed Cyrene in the dark, when animals are more active. It's been a while since we did this. 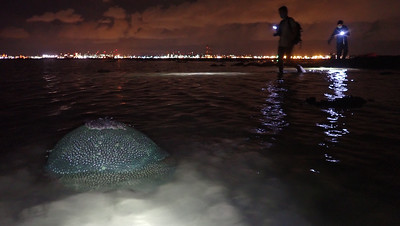 The seagrass cover in this Eastern part of Cyrene has grown very thin compared to the past. Despite this, I saw many furrows that look like they were made by feeding dugongs. These trails are formed when dugongs chomp up seagrasses including their roots, leaving a shallow meandering furrow of about equal width and depth. I've seen these furrows here on past surveys too. This is a view of a feeding trail with petrochemical plants on Pulau Bukom on the horizon. 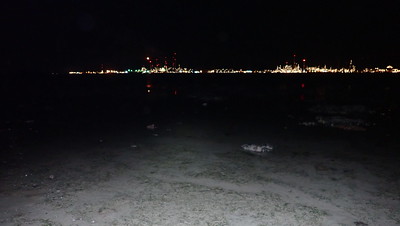 Most of us saw this medium sized Fluted giant clam (about 30cm long). Kok Sheng saw two more! The clam in this photo has the petrochemical plants on Pulau Bukom as a backdrop. 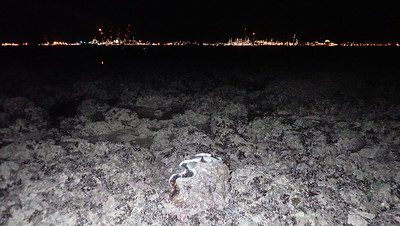 This is the other Fluted giant clam that Kok Sheng saw.
Kok Sheng saw one more too!
Dayna saw a cone snail! The cone snail is one of the most dangerous animals on Singapore shores. The snail can inject bare hands and bare feet of swimmers and shore explorers in shallow water.
And Jianlin saw another Cone snail! Its tiny 'harpoon' is hardly felt so victims are often unaware until they show symptoms. The toxin can have serious effects and death in humans. No antivenin is available for cone shell envenomation.
We saw a pair of large nudibranchs (Platydoris scabra) that appeared to be mating. I saw one Giant carpet anemone (no anemonefishes), many Frilly anemones, one Dawn flatworm. I only saw one Knobbly sea star, but the rest of the team saw more as well as other interesting fishes and nudibranchs. 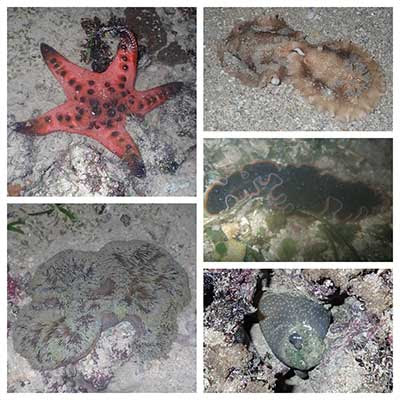 There are not a lot of corals on this shore. But there are a few large colonies. Here's some with Pasir Panjang Container Terminal on the horizon. 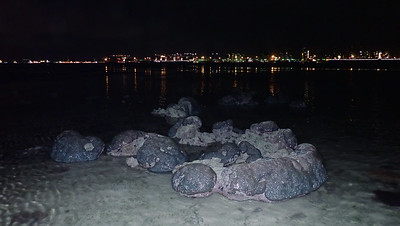 I saw a variety of common boulder-shaped corals. Large ones had dead portions, but I also saw medium-sized ones that were well formed. I did not see any that were bleaching. This is similar to what I saw on our last survey here in Aug 2020. 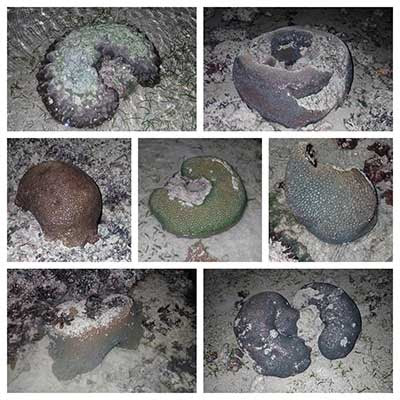 There were also many medium sized Leathery soft coral colonies. As well as some Asparagus flowery soft corals. They were also doing alright. The one in the photo has the Cyrene beacon on the horizon. 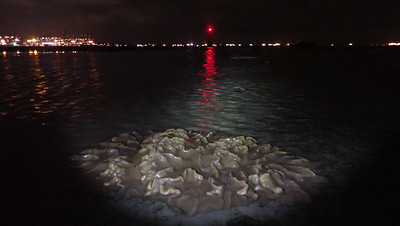 The tide turned rapidly at first light, and we barely made it to a good departure point as our landing point was in water which was too deep and murky. This is dangerous as we might step on stingrays which were plentiful in the water. Here's one taken by Jianlin.
And even sharks as they rush in with the tide to feed. In fact, Dayna took a photo of a black tipped reef shark in the shallow waters!
It was a short tide window and I didn't get a chance to check out the centre of the shore, here seen with the lights (and emissions) of Jurong Island on the horizon. 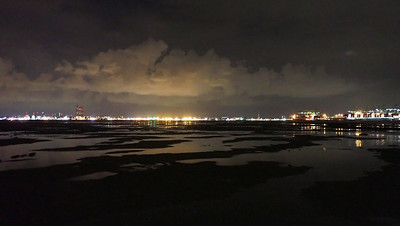 Although it lies in the middle of an industrial triangle and major shipping lanes, Cyrene has some of Singapore's most amazing shores. 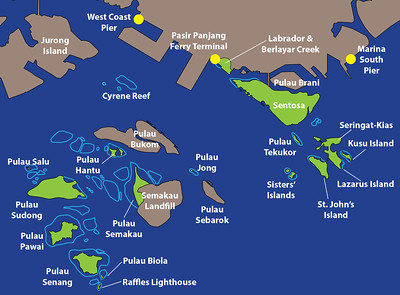 Here's a great photo by Kok Sheng of the Cyrene Beacon and the petrochemical plants on Pulau Bukom.
Let's hope it stays safe until we can visit again.