There are living rocky shores next to Pulau Ubin jetty. Today, we saw seafans, colourful sponges and other marine life here. But I sense, much fewer than on Changi shores nearby. 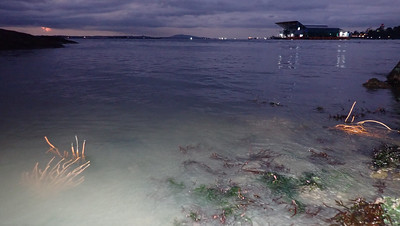 Seagrasses still grow lush here, but I didn't see as many animals as I did at Changi. Could the huge fish farm located just off the shore have something to do with this?

There are still dense growths of Spoon seagrass (with large leaves) all along the shoreline. The leaves were nice and green, most were free of epiphytes. The ground is very soft in some parts. 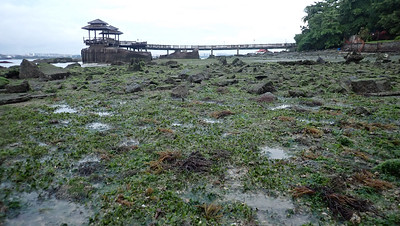 Unlike Changi seagrass areas, I saw much fewer sea stars and sea cucumbers here. I also didn't see any sea urchins. But I was delighted to see a Five-armed luidia sea star for the first time for a long time. I also saw a small Eight-armed sea star, and a tiny Biscuit sea star. I saw a Beige sea cucumber, a Ball sea cucumber and only one Pink warty sea cucumber (I saw  more sea cucumbers on the rocks than on the meadows). I saw several Geographic sea hares and the pink noodle-like egg strings that they lay. I also saw a few Window-pane clams. 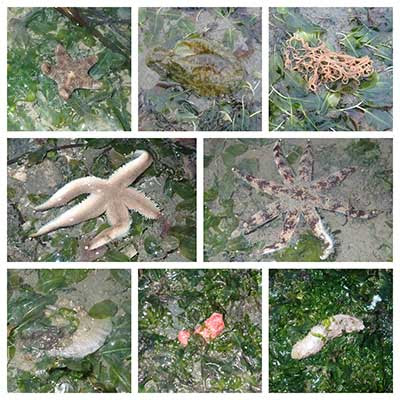 The rocks on this shore are alive with all kinds of animals at the lowest water mark. These can only be easily seen at a super low tide, which tends to happen early in the morning. 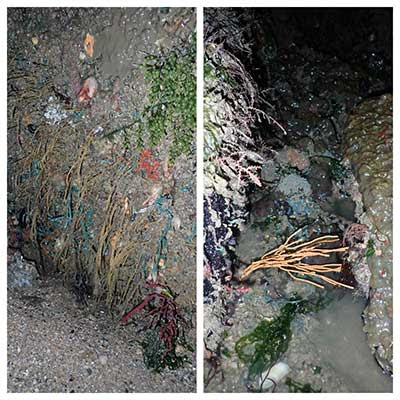 I did see several Haddon's carpet anemones, many with Tiny carpet anemoneshrimps. I saw several seafans of the more common variety. I didn't see any Ovulid snails on them. I only saw two tiny Pink flowery soft corals. In comparison, on Changi recently, we saw many more sea fans in a greater variety, with many Ovulid snails; and many large flowery soft corals. Today, I saw a large Stinging hydroid. 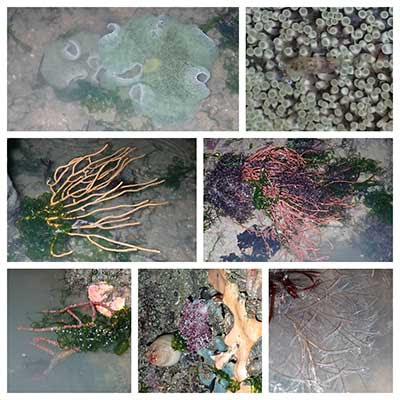 I saw a nice variety of sponges on the rocks! There were many clumps of Yellow bumpy sponge on the sandy bottom. On the rocks, a variety of colourful sponges commonly seen on our northern shores. Including the Rambutan sponge and Golf ball sponge. 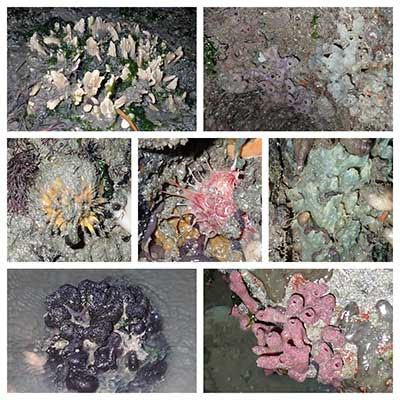 Today, I saw an unusually large number of Sponge synaptid sea cucumbers, as usual, draped on sponges. Among the other interesting animals that live among these reefy lifeforms were many Thorny sea cucumbers, Pink warty sea cucumbers and Orange sea cucumbers. I also saw several Onyx cowries, which are nowadays not often seen on our shores. The only nudibranchs I saw were two Sponge nudibranchs that do resemble sponges. But of course Chay Hoon saw many more than I totally missed. 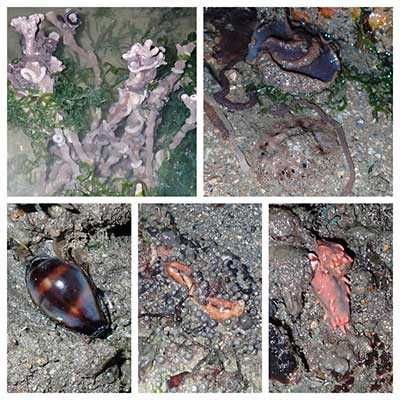 We arrived in a storm which cleared up quickly so we could do the survey, and enjoy a dramatic sunrise. My last survey here was in Jan 2018. In Jun 2019, we spent most of our time at Thompson's Rock, which we didn't survey today. 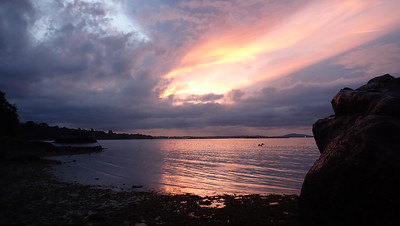 A last look a the huge floating fish farm located near the shores we surveyed today. 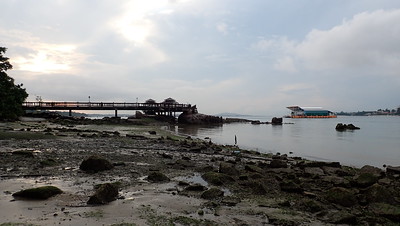 What is the fate of this Ubin shore?

The 2013 landuse plan by the Ministry of National Development released in response to 2013 Population White Paper shows plans for 'possible future reclamation' (in light blue surrounded by dotted lines) that may impact this shore including Chek Jawa.

The plan includes plans for a road link (black line) from the mainland jumping off at Punggol, crossing to Pulau Ubin through Chek Jawa to jump off to Pulau Tekong before circling back to the mainland on Changi East. Proposed reclamation (in yellow) will bury Pasir Ris shores, Pulau Sekudu and Chek Jawa as well as a large amount of shore at Changi Beach. I feel it is thus important to update our understanding of what is going on in the field at these sites including Chek Jawa and Pulau Sekudu.

Others on this survey: Chay Hoon

Other shores surveyed on the same day

Jianlin checked up on Pasir Ris