The most mega of sightings this month is of a juvenile whale shark! 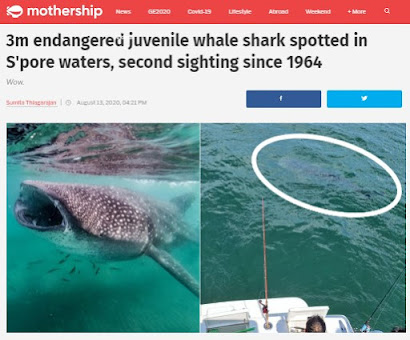 On 13 Aug, Mothership reported: A wild three-metre juvenile whale shark was recently spotted in Singapore waters. This sighting was confirmed by Dr Zeehan Jaafar, a researcher in Singapore who studies aquatic vertebrates, including fish, in the Department of Biological Sciences at the National University of Singapore. Dr Zeehan will publish more details on this sighting on the Singapore Biodiversity Records.

There were also lots of sea turtle sightings, and signs of dugong.

The first photo is by Juepeng Lin of a subadult off St. John's Island from 2015. The second photo is by Soon Lea Lim of a subadult off Bukom Island taken last month. The latter photo started discussions around sightings of this species within Singapore's territorial waters. Heartfelt gratitude to these awesome citizen scientists for sharing their observations with us!"

Kayakers rescue a sick sea turtle on 2 Aug which was handed over to NParks. More in this Mothership article. 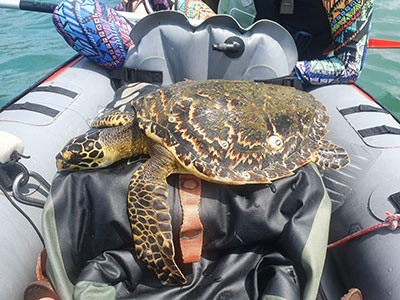 See also this article on Channel NewAsia "More turtle sightings and nests over the last few years: NParks" on 29 Aug 2020.

Dugongs on our shores!