Labrador is our last natural mainland reef, located next to the massive Pasir Panjang container terminal and near petrochemical plants on Pulau Bukom. 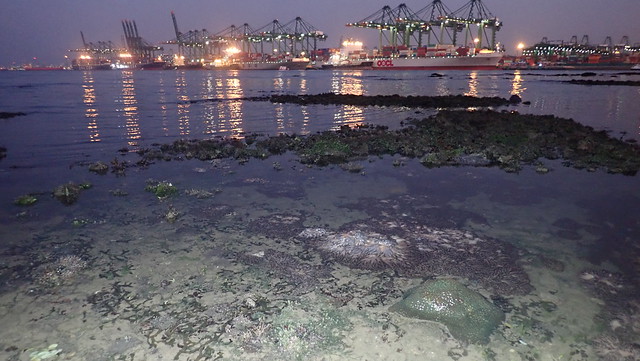 This morning, a small team found lush seagrass meadows with flowering seagrasses, and reefy areas with interesting marine life. Thanks to NParks for permission and for accompanying us on the survey!

One of the special finds of the day was this lovely nudibranch that the regular survey team haven't seen before on the intertidal - Ceratosoma tenue. Thanks to Adelle for finding it the first time, and Liz for finding it again for the rest of us. 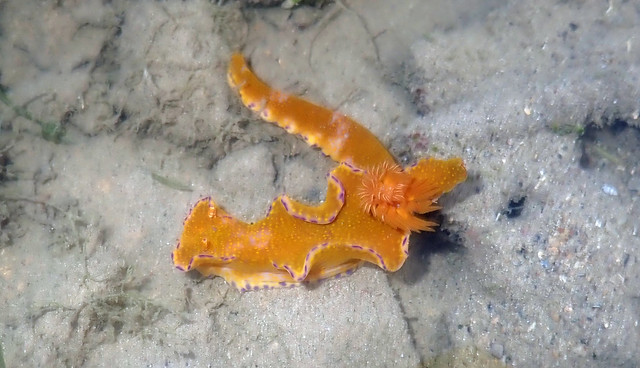 I also came across this cowrie with a red body mantle which might be Saul's cowrie. I've only seen this one other time, at Pulau Sekudu. 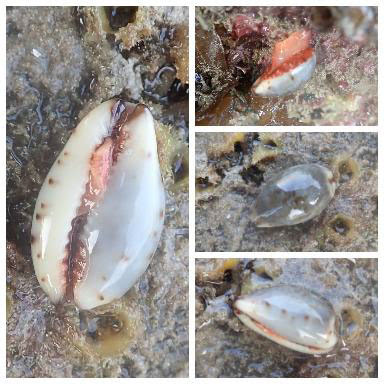 Other interesting critters included the Gold-spotted hermit crab, also one that I don't see often. I also saw a Spangled flatworm, a few Frilly sea anemones and some Button zoanthids, one Giant carpet anemone and one Wiggly reef star anemone. 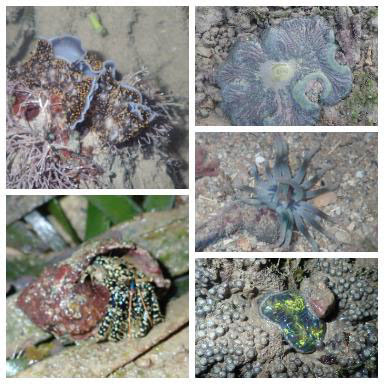 Sheltering among the seagrasses, NParks friends spotted a Copperband butterflyfish and a Yellow-banded damselfish. 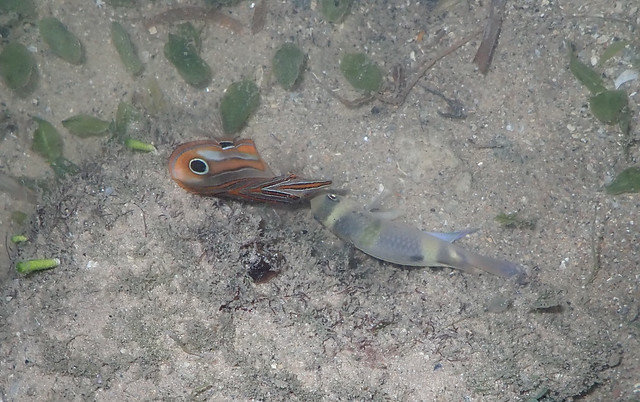 Liz spotted razorfishes! The rest of the team also spot all kinds of fishes big and small. A few octopuses were also seen.
At the reef edge, the large corals are not doing well. The large Crinkled sandpaper corals that used to be here are all mostly dead. The outlines of the colony are still clear, with some patches of still living polyps. On my last proper survey of Labrador in Aug 2017, we already noticed most of the corals on the reef edge did not survive the mass coral bleaching in 2016. 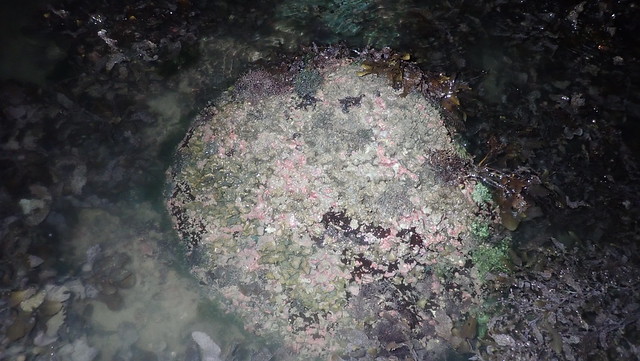 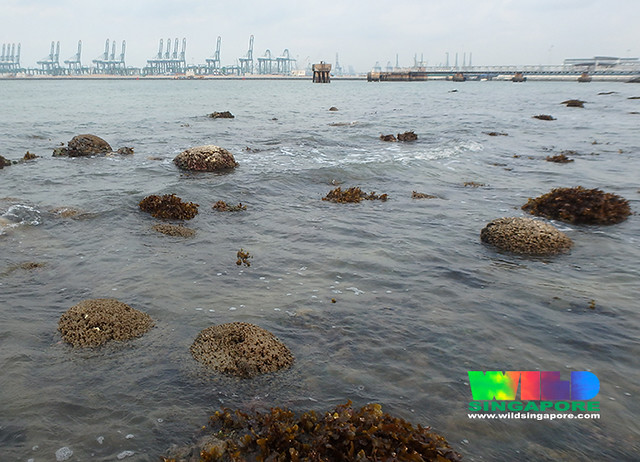 This is what it looked like this morning. Sponges, seaweeds and other life forms have settled on the dead corals. 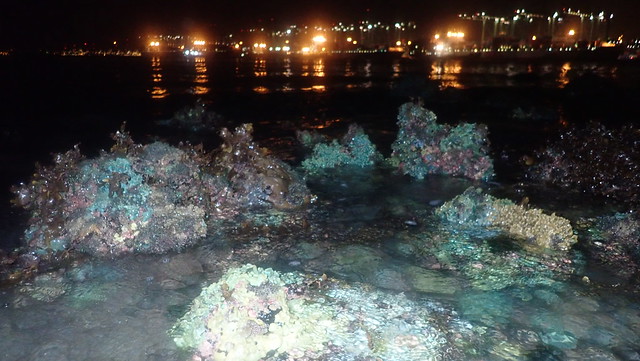 There were also a few other kinds of sponges. 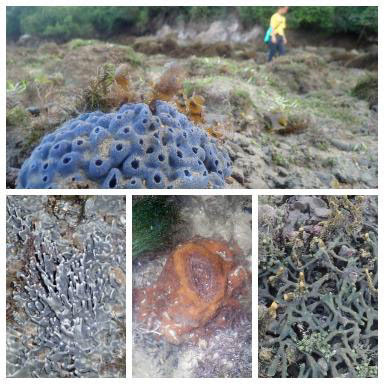 But there are still some hard corals on the shore, and I didn't see any that were bleaching. Similar to what I saw in Aug 2017, the most abundant large coral colonies are Boulder pore corals. 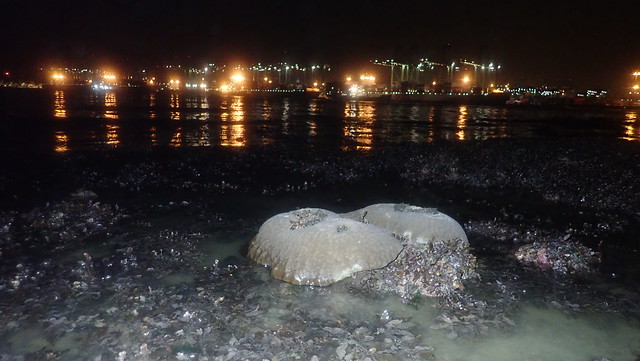 There were also many Merulinid corals. 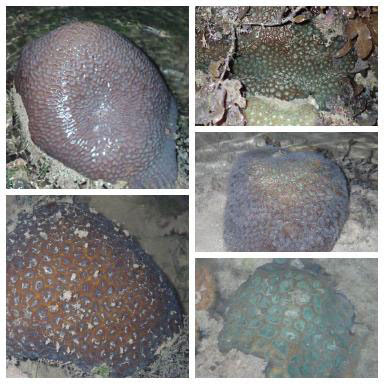 There were also a few plate forming corals: Disk corals and Plate montipora corals. There were some small colonies Small goniopora corals, and even a small Acropora colony. 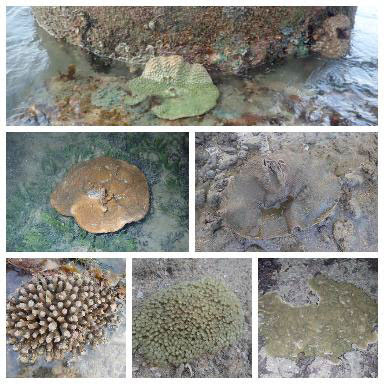 Closer to the container terminal, there are even many small Circular mushroom corals! 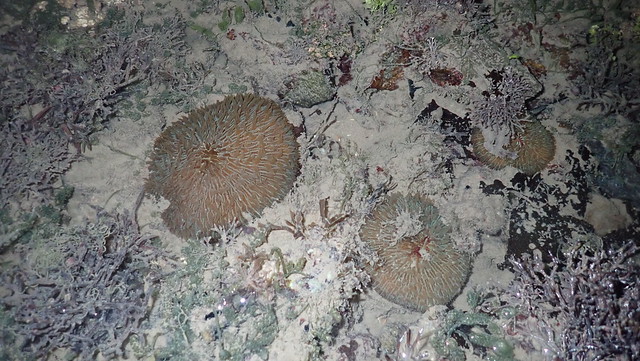 And here and there, small corals are settling down on the shore. 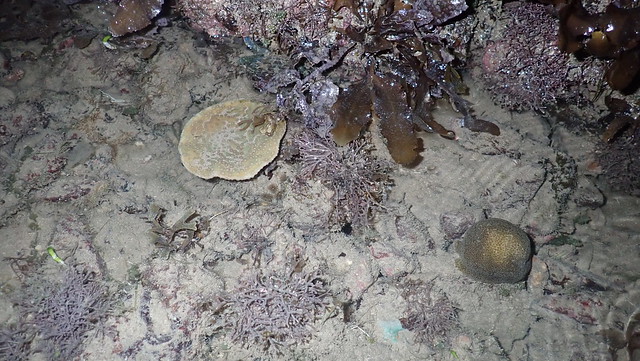 There were more leathery soft corals today than on my last survey in Aug 2017. Both in number and variety. None of them were bleaching. 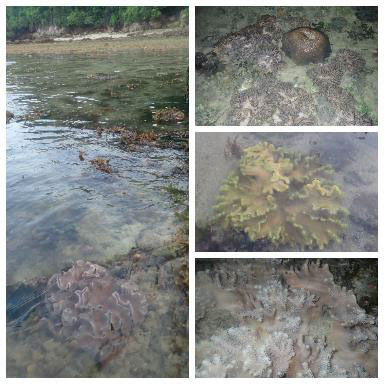 They were particularly abundant nearer the container terminal! This is also where the mushroom corals are found. 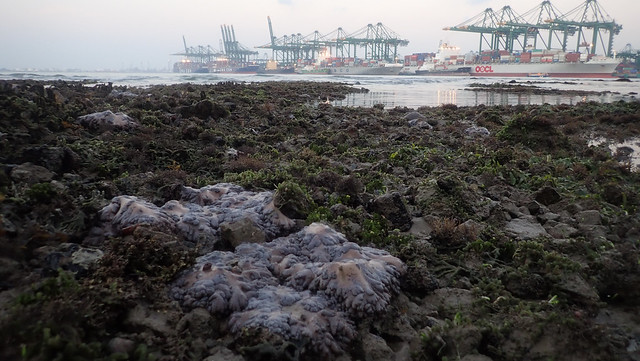 This is the site of the cofferdam that was built in 2007 for removal of undersea cables. The area was filled with small granite chips, which are still here today. Here's more about a study on the impact of the cofferdam and what I saw in 2008 after the cofferdam was removed. 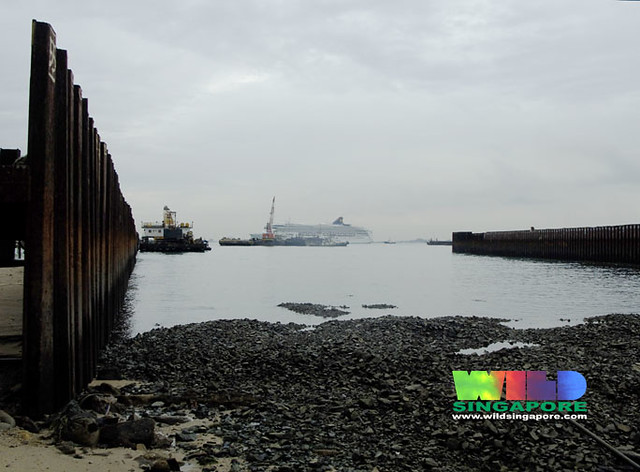 Labrador has been the stronghold for long Tape seagrasses. Elsewhere on our shores, since the early 2010s, they are cropped short and in some places, disappeared. It was great to see long Tape seagrasses today. And a few clumps were even flowering! There were a few female flowers, with their petals still attached (lower left photo). Since the petals drop off very soon after blooming, this suggests they bloomed yesterday. There were also some male flower bracts, although I didn't see any of the male flowers (which look like tiny pieces of styrofoam). I didn't see any fruits. 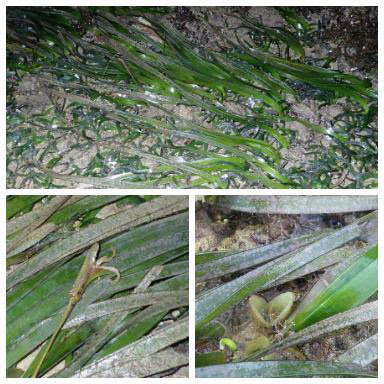 Unfortunately, I did see some clumps of Tape seagrass with leaves that were cropped (to about 30cm). 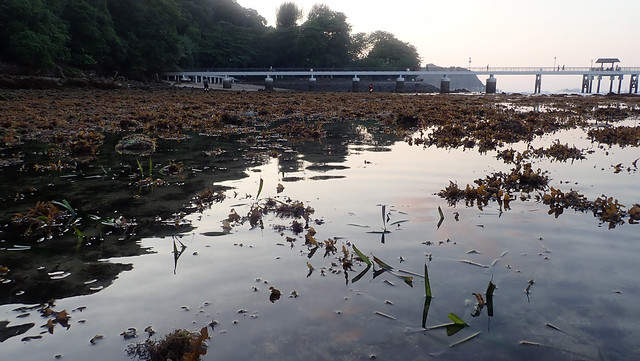 Sickle seagrass still grows thickly at the entrance to the shore, between the seawall and the jetty. There are sprinkles of it elsewhere on the shore. I didn't see any that were flowering. 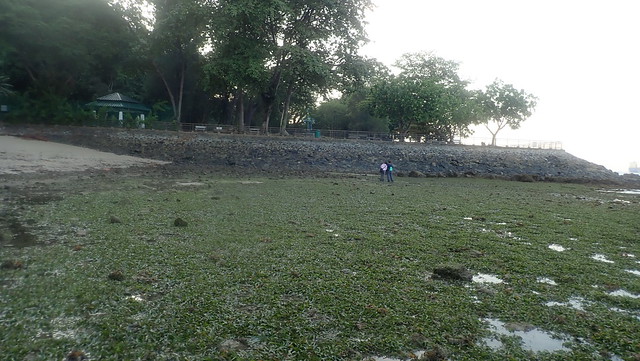 There are also lush patches of Spoon seagrass (with small leaves) growing nearer the rocky shore at the mid-water mark. This is similar to what I saw in Aug 2017 and my brief look here on Nov 2018. 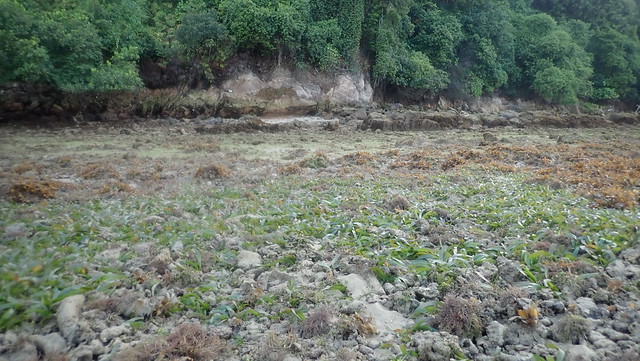 The sargassum is starting to bloom on the shore. 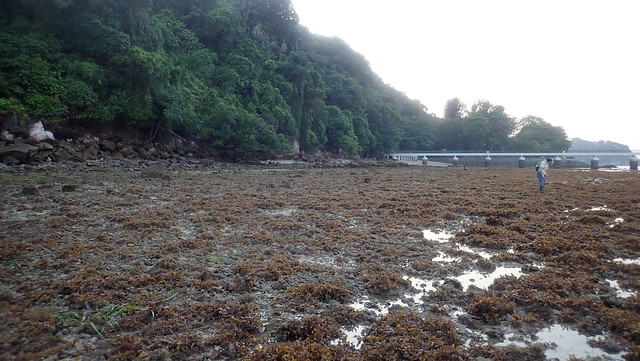 The results of the ill-conceived Seacil project remain the shore more than a decade after the project was abandoned. I am glad nowadays, there are more stringent guidelines and care before doing large scale experiments on our precious shores. 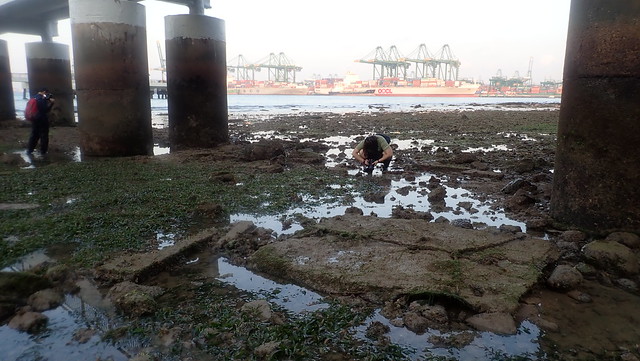 Labrador shore is now permanently closed to the public due to safety issues. Labrador is Singapore's last natural cliff on the mainland. But the jetty is now open, with fishing only allowed at the furthest end of the jetty. More about what you can see and do at Labrador on the NParks website. Thanks to NParks for permission to survey and for coming so early to be with us on our trip. Thank you!


Meanwhile, others surveyed other shores in Singapore: