Learning about the Seacil Project

Today I finally learn more about the Seacil Project! 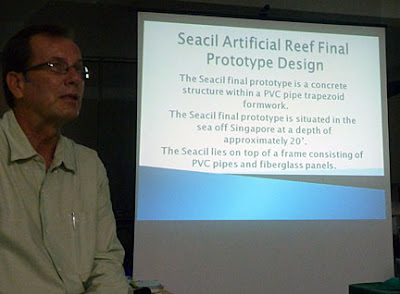 Charles Rowe, the heart and soul behind the Seacil Project, gave a presentation at a public Discussion on "The Seacil Artificial Reef" hosted by the Nature Society (Singapore) on 27 Jul.

It was well attended by many nature volunteers, marine scientists and others who were as passionate about Singapore's marine biodiversity as Charles Rowe is. In the front row, young students who were keen to learn about reef restoration. Charles Rowe had even brought along a model of a Seacil (left in this photo). 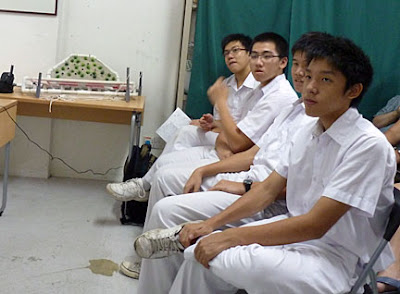 Charles Rowe gave a very comprehensive presentation. Including the personal incidents that led him to come up with the idea of Seacils, to how he decided on the name, the many sacrifices he made in terms of personal time, suffering physical injuries and many contributions he made without financial gain. He gave a thorough chronology of events starting from the first prototypes to the final end of the project. He did not indicate during the presentation that he intends to resume the Seacil project in Singapore.

I've compiled some of my shots of his presentation in this slideshow. These shots do not include Charles Rowe's efforts to apply Seacils to other locations such as in the Caspian Sea, to involve the deaf in his underwater work and some other applications of Seacils.

"The Seacil Artificial Reef" by C. Rowe - picture slideshow
Charles Rowe's presentation is very thorough, which you can read for yourself on the slideshow above. Ivan and November also live tweeted the presentation. (#seacil).

I'll just highlight a few points that caught my attention.

I first wondered about this project in Oct 2007 when I came across large debris on Labrador that looked very similar to the diagrams of the Seacil Project in an article in the Straits Times. At that time, I had a few questions about the Project. I tried very hard but failed to engage Singapore Polytechnic on the issues. So it's great to finally find out some answers to these questions!

Were the large debris found on Labrador (and still found as of 13 Jul 2011) part of the Seacil Project? Yes they were. Charles Rowe explained why they were there. Here's my slideshow of the debris we have been seeing since 2007, in this flickr set.
Were the Seacils on Labrador actually built on the intertidal zone near or even on the seagrass meadows there? Yes, they were. 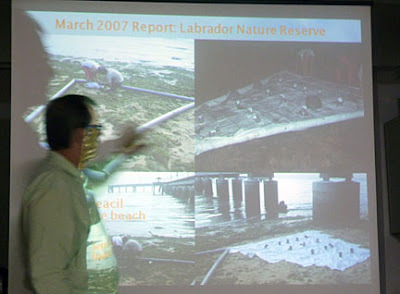 Here's more photos of the construction of the Seacils on Labrador's intertidal zone. 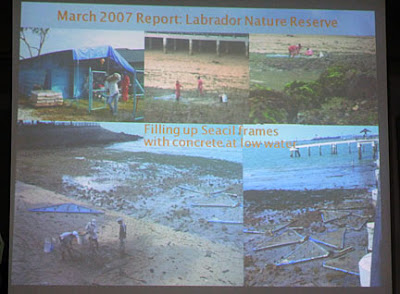 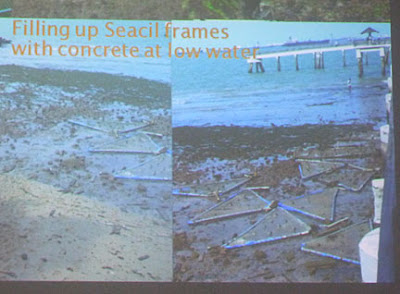 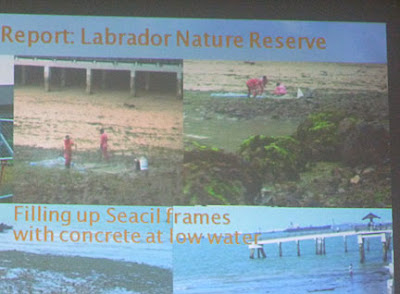 How about the seagrass meadows in the area where the 50 Seacils were constructed: Was the Seacil project aware of and did they give consideration to the seagrasses? During the presentation, Charles Rowe referred to 'ooze and slime' that is part of Labrador during low tide and said it very soft and muddy there. He also admitted that he had a preference for reefs and felt damage to seagrasses was acceptable collateral damage particularly to keep the cost of the Seacil project low. Later during the Q&A, it was highlighted that seagrasses are an important and threatened marine habitat, especially in Singapore. Labrador shelters the last best seagrass meadows on the mainland, especially for the Critically Endangered Sickle seagrass (Thalassia hemprichii). For more about Singapore's seagrasses, and the difference between seagrass and seaweeds. 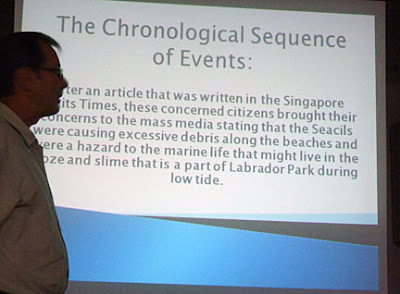 I also learnt that the Project used 'beach sand' i.e., sand from Labrador Beach, to make the concrete for the Seacils (I presume the photo below shows the Seacil team shovelling sand from the beach to create the Seacils). Later Charles Rowe said about half a ton of sand is used for each Seacil. So for the 50 Seacils eventually placed at Labrador, possibly about 25 tons of sand was removed from Labrador's shore. 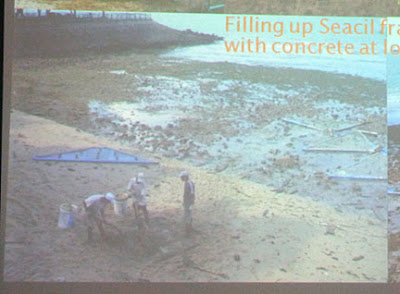 I was also wondering whether monitoring was done on the growth and recruitment of corals on the Seacils. Charles Rowe shared a video and some photos taken in Jan 2011. 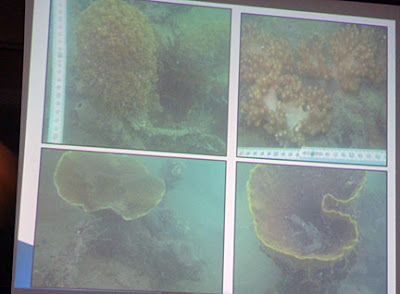 Later on, he showed 'before and after' photos and he highlighted signs of growth in some colonies. I did not get the impression that data was collected consistently (e.g., measurements not indicated for 'before' photo) and coral identification was not indicated. It also seems to me that the 'before' coral colony might not be exactly the same 'after' colony featured. 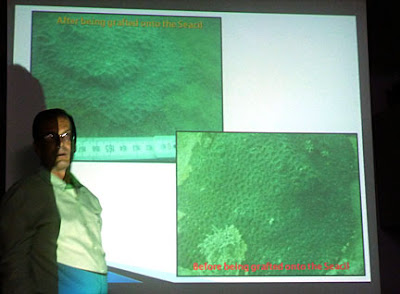 I was also curious when I first read in Artificial Reef Revitalises Marine Life, that for the Seacil project at Sentosa, the team "introduced anemones and clown fish". From the presentation, it seems they did indeed release anemonefishes at the site. All the anemonefishes released seem to be the same size. Recently, we learnt during Dr Daphne Fautin's Sea Anemone Lecture that anemonefish naturally settle into a host anemone as a tiny fish. The natural situation of anemonefishes in an anemone is for a graduating size difference in fishes. I'm not sure that releasing adult fishes of equal size into an anemone is well advised. More about Singapore's anemonefishes. 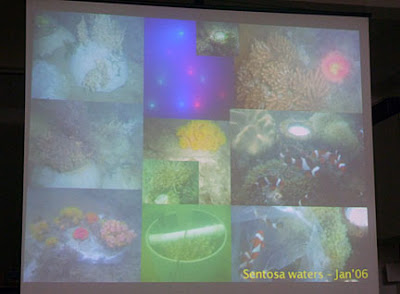 Among the issues Charles Rowe mentioned was that the Seacils met the IMO standards for use of concrete and that the Seacil project "should not be viewed as a means of disposing material 'junk' onto the sea floor." 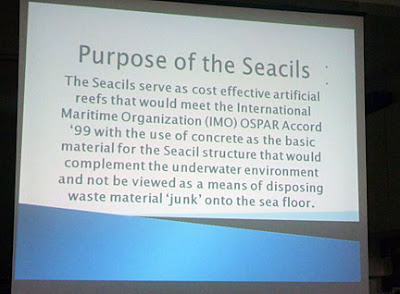 It was a little confusing to read, a few slides later, that among the other purposes of Seacils he mentioned was "A means of disposing of waste materials i.e., concrete aggregates from razed buildings and fly ash from local incinerators and other uses."

Despite some fundamental disagreements on various issues, I am touched by Charles Rowe's passion for the project and feel for the many obstacles he faced. Among which were 'the critics' and bloggers, to whom he attributed the final forced closure of the Seacil Project on Labrador.

Here's my blog posts in Oct 2007 and Nov 2007 asking questions about the project, with links to other blogs and posts asking similar questions. He and I agreed that if we had held this discussion in 2007, things might have turned out differently.

I must applaud Charles Rowe for stepping up to give this presentation. And to Nature Society (Singapore) for hosting it. I have learnt much from this. Some of my personal takeaways include:
Above all, I personally believe it is important to realise that beautiful marine life can settle naturally on our artificial structures. We should study and understand these processes better when we embark on restoration efforts that may impact existing marine habitats.

See also Ivan's very comprehensive post about the issue which includes all the tweets made during the presentation.