900 volunteers from 45 Organising Groups offered 100 activities catering for an estimated 8,000 participants over 10 weeks!
Thanks to feedback and data from the Organising Groups, Ng Jing Rou (Pesta Ubin coordinator, intern from YCS) did a report to help improve for the next Pesta Ubin! Please also send me your feedback! Here's some highlights:

The full report with Appendices is available on google docs
http://tinyurl.com/PestaUbin2017report

Thank you Minister Desmond Lee, for supporting Pesta Ubin! The volunteers are also touched that you and Minister Ng Chee Meng took the time to meet and hear them on the ground. And for the wonderful fruits party you sponsored to end Ubin Day.

Significance of Pesta Ubin: A kampung of stakeholders

Pesta Ubin provides an opportunity for people who care about Pulau Ubin to come together as a kampung, to express their passion and show others how to make a difference for Ubin issues important to them. Many Organising Groups act constructively for Ubin on key issues, all year round.

SOSD's Project SOUND to look after the kampung dogs, goes on all year round at Ubin

NParks was a key partner in Pesta Ubin. Organising Groups greatly appreciated the support of free transportation for more than 100 volunteers, free access to NParks venues and excellent logistics support by friendly staff.

Besides being the biggest Open House, Pesta Ubin 2017 charted these new directions.

Republic Polytechnic and Outward Bound Singapore got youths to plan and execute their Pesta Ubin activities.


Students were also involved in many exhibition booths.

Exposure to community building in Ubin will hopefully mean greater youth stewardship of the island, and that youths will eventually lead Pesta Ubin. 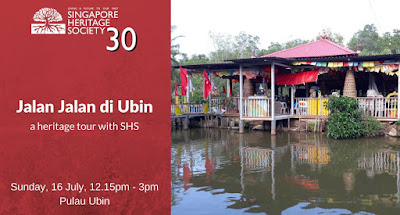 At Uncle Ah Kok’s house, volunteers from Sea Angel and Artsolute created “Living Fisher Village”, an authentic kampung setting for experiencing Ubin life with activities throughout the 10 weeks — from large-scale opening and closing events, to weekly kayaking, art and nature happenings. This truly embedded The Ubin Way in Pesta Ubin.

The inaugural Pesta Ubin Workshop was held a month prior. Around 70 individuals from 20 Organising Groups participated. They learned what each were planning for Pesta Ubin 2017 and formed new friendships during the fun workshop. The full After Action Report for the workshop is here.

To support the Pesta Ubin Run which brought 450 people to Ubin, a mini-fair was arranged - kampung games by U Cares Volunteers, kampung photo booth by Living Fisher Village and mangrove booth by R.U.M. This created a more festive experience, and allowed participants to learn more about Pulau Ubin.

Pesta Ubin is good for business. There was feedback that the extended period of Pesta Ubin this year led to more business and income for some Ubin shopkeepers.

The impact of a longer Pesta Ubin was mostly positive. Many Organising Groups took this opportunity to repeat their activities and garner even more participation. Some however, pointed out that 10 weeks was too long: difficult to maintain a high, a shorter duration creates more urgency and faster registration. Taking into account such measured concerns, we are looking at running Pesta Ubin 2018 for 5 weeks.

While most activities were aimed at family fun (77), many were specifically targeted at kids (61) and youths (43). Nature-oriented (67) activities were most common and complemented by those centred upon heritage (30), kampung life (25) and art (16). Different types of walks (34) were available for adrenaline-seekers on top of water activities (12) or sports (11) in general; unique activities include workshops (18) and those which took place at night (14). For those passionate about serving the community, volunteering (16) opportunities such as cleanups (3) were available. Importantly, the huge array of free (48) and non-registering (36) activities were crucial in allowing visitors who are already on the island to simply join in the fun.

Birdwatching at Pekan Quarry lets even the smallest child get close to the birds.


Johnson Ong and his amazing volunteers bring colour and cheer to Pesta Ubin.


Ubin Day was a great way to end Pesta Ubin!


Among the largest public participation was at Uncle Lim’s shop, endearingly called Pesta Ubin Central. Manned by Mohammad Juhari and volunteers every weekend, the public could walk in and create memories at the free kampung photo booth or through colouring the huge Ubin map. An estimated 1,000 people enjoyed these activities over the 10 weeks.

Uncle Lim also organised a durian ice-cream and fruits party on Ubin Day, for volunteers to gather for the last time and collectively conclude Pesta Ubin 2017. It was well attended and appreciated. We wish to put on record that Uncle Lim’s generous, sincere and friendly support for Pesta Ubin every year was vital in creating the kampung and open atmosphere. He will be sorely missed when his shop is closed for renovations.

We are able to see how Pesta Ubin has, over the years, affirmed its identity as an open house for all. For a huge number of activities, participants came and enjoyed their time together as families; youths were a key demographic of participants over these 10 weeks as well. Even corporate individuals found meaning through select Pesta Ubin activities!

Tan Sijie, a great supporter of Pesta Ubin, brought his students from Raffles Institution to Ubin.


On this note, it is worth mentioning Accessible Ubin, a newly-founded initiative to render the island more accessible for individuals who experience mobility issues - further strengthening our ethos of inclusivity. Pesta Ubin 2017, which welcomes all, was thus able to attract a significant number of newcomers to the island.


Organising groups underlined that a significant portion of participants were experiencing their first times — taking part in the specific activity or even stepping foot on Pulau Ubin. Generally, participants enjoyed their respective activities, contributed in large part by the peaceful, natural and rustic ambience of the island; some were even pleasantly surprised at tSee Appendix A for all raw data on participant impressions.

With few exceptions, all organising groups were able to meet their own expectations, in terms of turnout rate and the activeness level of participants. While many were first-timers to the activity e.g. coastal cleanup and kayaking, that did not stop them from enjoying the learning process, both on and about Pulau Ubin.

Organising groups expressed satisfaction of the coordination performed, from logistics arrangement to publicity for each event on social media (Pesta Ubin Facebook page and blog). NParks and Pesta Ubin coordinators were commended on pre- and post-event engagement. For Ubin Day specifically, Organising Groups appreciated the free bumboat and van transportation for their volunteers, as well as the ample refreshments provided.

These positive feedback serve as an invaluable source of affirmation as we continue to improve the coming runs of Pesta Ubin for all.

Pesta Ubin 2017 managed to generate even more media coverage than the previous years! Mainstream media which featured us were namely Straits Times Life and Lian He Zao Bao. Many lifestyle and online platforms also helped to spread the word without any prompting.

A major breakthrough this year: no bottled water was distributed to the 450 participants of Pesta Ubin Run! Instead, NParks provided water dispensers and organisers asked participants to BYO containers. Similar arrangements were made for the hundreds of volunteers on Ubin Day.


There were 3 clean ups, with Sea Shepherd removing nearly half a ton of trash in just one hour with more than 100 volunteers. There seems to be innate public interest in the values of Ubin Way: posts about volunteering and sustainability issues got among the most hits on Pesta Ubin social media.


Pesta Ubin is truly a community effort. Made possible by volunteers. From individuals to groups who work for months on their Pesta Ubin activity. Special thanks to the many NParks officers who have supported the volunteers and made special arrangements so they could contribute to Pesta Ubin.

Thank you everyone!
Your feedback wanted!

Did you attend Pesta Ubin? Do you have feedback about it? Please leave a comment or email me hello@wildsingapore. Help us to make the next Pesta Ubin better!