You CAN make a difference for Pulau Ubin! Here is a unique opportunity to intern for Pesta Ubin AND Youth Corps, thanks to support by the National Youth Council! 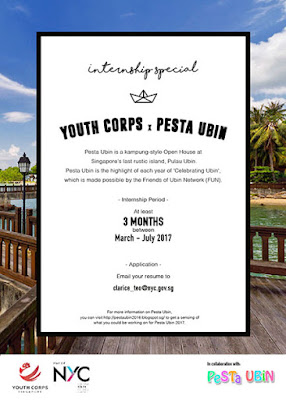 Pesta Ubin is a kampung-style Open House at Singapore's last rustic island, Pulau Ubin. Pesta Ubin is the highlight of each year of 'Celebrating Ubin', which is made possible by the Friends of Ubin Network (FUN).


Internship period: at least 3 months between March to July 2017.

To apply, email your resume to clarice_teo@nyc.gov.sg

For more information on Pesta Ubin, you can visit http://pestaubin2016.blogspot.sg/ to get a sensing of what you could be working on for Pesta Ubin 2017.

I would like to thank the previous Wild Interns who paved the way and laid the foundations for Ubin Open House. Without them, we would not be at this juncture today: contemplating 10 weeks of Pesta Ubin in 2017!

Sumita Thiagarajan laid the foundations for the first Ubin Open House, the one-day Ubin Day in 2014. The first time Ubin Day was revived in a decade.
Lee Min Lin led the charge for the two-day Ubin Day 2015 takaing care of everyone and everything.
Last year, Vanessa Teo valiantly took on 5 weeks of Ubin Open House, which was renamed Pesta Ubin!

Pesta Ubin 2017 is expected to be even bigger and better! I will still lead as Pesta Ubin Coordinator, and I need even more help. I am very grateful to the National Youth Council and Youth Corps for supporting with the Internship Special.