Mass coral bleaching is happening at Chek Jawa. Although we just surveyed this shore  a month ago, we thought we should have a look again given the recent mass bleaching elsewhere.
The survey team estimates about 50% of the hard corals we saw were bleaching and 100% of the flowery soft corals were bleaching. We were glad to see a wider variety of sponges than on our last survey. We did not see a fishing net, but saw two large fish traps, one with fishes in it. 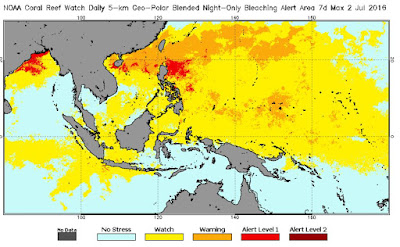 Coral are colonies of tiny animals called polyps. Each polyp lives inside a little hard skeleton. The huge colony is made up of the skeletons of countless polyps. The polyps of all reef-building hard corals harbour microscopic, single-celled algae (called zooxanthellae). The polyp provides the zooxanthellae with shelter and minerals. The zooxanthellae carry out photosynthesis inside the polyp and share the food produced with the polyp. Corals generally have white colour skeletons, which is believed to assist in photosynthesis by reflecting light onto the zooxanthellae.
When there is massive loss of zooxanthellae in a hard coral colony, the polyps become colourless and the underlying white skeleton shows through. Thus patches of the colony appear pale, white or 'bleached'. The polyps are still alive and the hard coral is not dead (yet). Without the food provided by the lost zooxanthellae, the polyps will be stressed and prone to diseases. Skeleton production and reproduction are also affected.
Hard corals harbouring zooxanthellae live close to the upper limit of temperature tolerance. Thus a temperature increase of even 1-2 degrees centigrade can redult in bleaching. It is believed that global warming will lead to massive bleaching. As we have seen on the Southern shores, bleaching corals are found right next to ones of the same species which are perfectly fine.
But prolonged bleaching can kill corals and seriously damage large sections of a reef. Factors believed to cause bleaching include: temperature fluctuations (too high or too low), excessive exposure to ultraviolet light, excessive sedimentation in the water, changes in salinity and disease. It is generally believed that bleaching is related to unusual prolonged temperature increases in the seawater. Once the cause of bleaching is removed, however, polyps may eventually regain zooxanthellae (which live freely in the water) and thus recover their health. At Chek Jawa, the coral rubble is dotted with small clumps of Flowery soft corals. 100% of those I saw were bleaching. 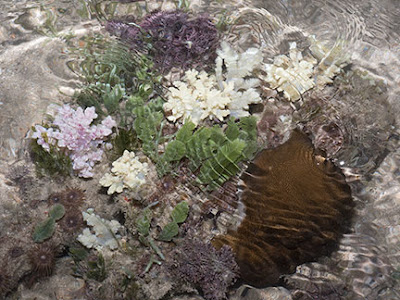 Corals hard and soft are home to small creatures. When the corals succumb to mass bleaching, their symbiotic guests will also die. Today, most of the Flowery soft corals I saw were teeming with tiny brittle stars. 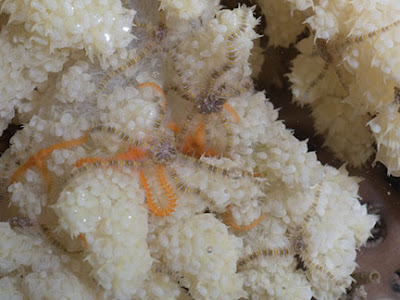 Other animals that harbous zooxanthallae can also suffer from bleaching. This includes the Haddon's carpet anemone. Chek Jawa still has lots of them and most of those I saw were alright. Only one (near the boardwalk) was bleaching and a few had yellowish portions. I also saw some Posy anemones and a few Swimming anemones, they were not bleaching. 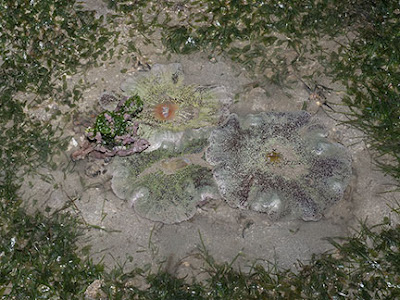 The were a few clusters of colourful sponges here and there. Much more than what I saw last month. So nice to see! Hope this means that the sponges are (finally) coming back after they were wiped out in 2007 during the mass death at Chek Jawa. 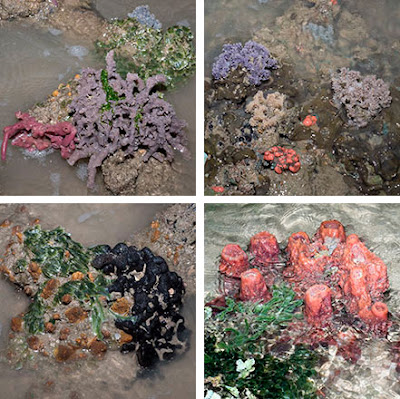 Many animals live with sponges. Such as these Sponge synaptid sea cucumbers. Sponges are often eaten by nudibranchs. Today I was one Cheesecake nudibranch. The rest of the team saw lots more. 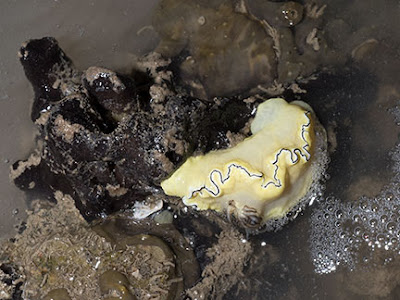 There were also many ascidians, the favourite food of flatworms. We saw the usual Blue-spotted flatworms on Pink ascidians which were really abundant today. And these funny Marbled flatworms which I often see on Beige sheet ascidians. 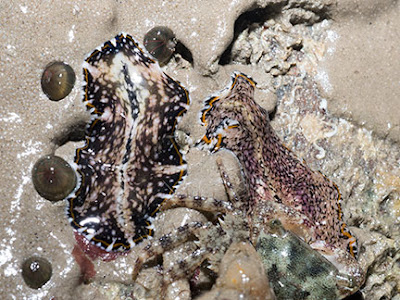 A few of the ascidians had blackened or whitish portions. Disease? Attack by predators? 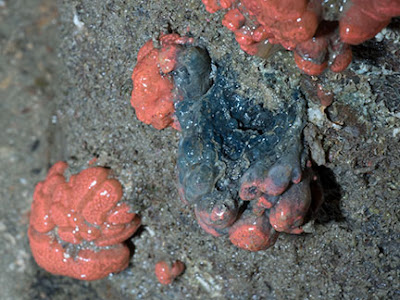 There were many Wandering cowries among the ascidians (I suspect they eat them). I saw two Onyx cowries and one Miliaris cowrie. This is the only sea fan I saw. I looks like an Asparagus sea fan, which I don't see often outside of Beting Bronok. 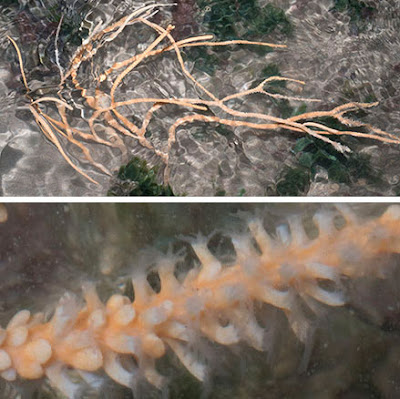 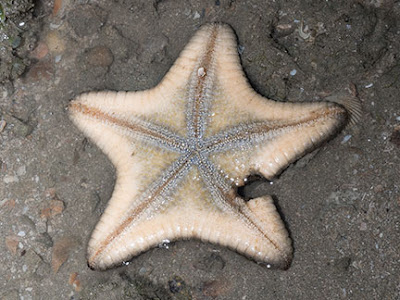 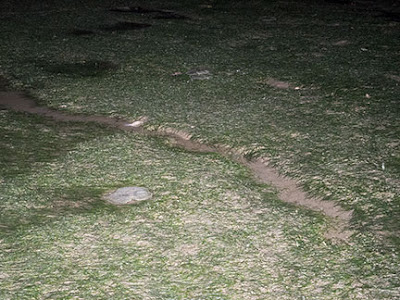 How nice to see the Delek Air is blooming on Chek Jawa's coastal forest. This plant, and many others at Chek Jawa, are listed as Critically Endangered because this kind of coastal habitat is no longer common in Singapore. 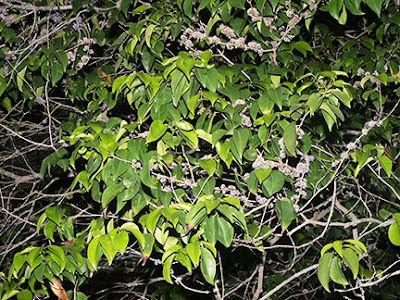 Last month we found a 200m net which trapped lots of fishes and crabs. It was a relief today not to find such a net. But we did come across two large fish traps. The traps look very old and rather wobbly. 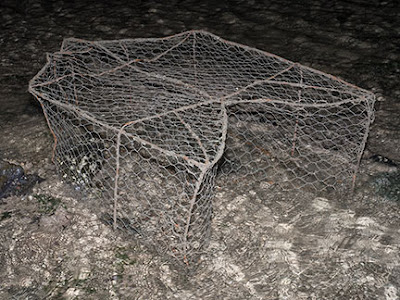 One was empty, but this one found under the Chek Jawa beacon had a 60cm long grouper and two filefishes. The grouper was still alive and swam away when we released it. Are these traps regularly checked? Or are they abandoned? Regardless, we disabled both traps. 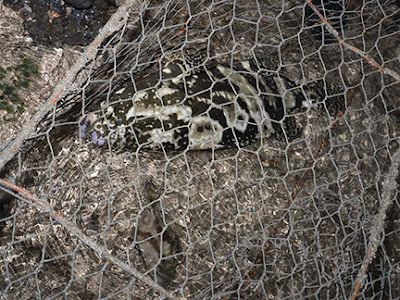 I also saw many small holes that look like they were dug up after the tide went out. Most were empty but this one had a sea cucumber with 'exploded' guts (which they do in self defence). I couldn't find any animal tracks around the holes. Later on, we saw footprints under the boardwalk where we did not go. Are people coming to Chek Jawa at night to forage? 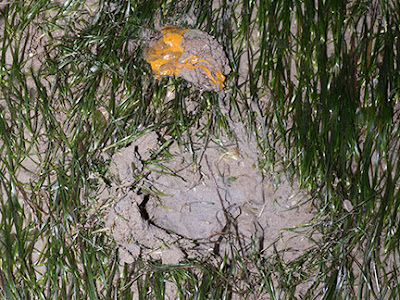 Chek Jawa's seagrass meadows and reefy areas are teeming withe fishes. I noticed this medium-sized Copperband butterflyfish. There were also many small fishes like rabbitfishes, gobies and cardinalfishes. 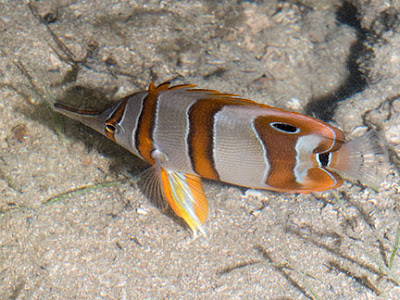 Having Chek Jawa preserved for wildlife means fishes and crabs and other animals can grow up safe from humans. These will spread outside Chek Jawa where they can support recreational and industrial fishing.

While we can't do anything for our corals when they start mass bleaching, we can do our part to help them stay healthy and strong by minimising stresses on them. I hope Chek Jawa will stay safe until our next survey.

This survey was done with permission from NParks. Thanks to Chay Hoon for organising all the transport.