The tides today were perfect for a two-shore survey before dawn: Bedok Jetty and another nearby seagrassy shore at East Coast Park. 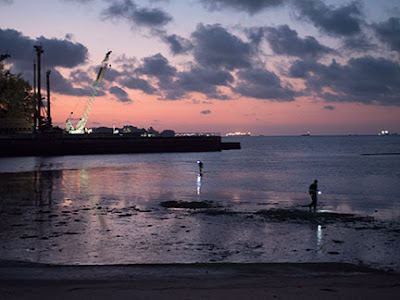 There are no corals growing in these locations so no mass coral bleaching was encountered. Despite being near massive construction, these shores remain very much alive.


Our first stop is Bedok Jetty! My last trip here was in Jun 2013. The team visited in Jul 2014 but I couldn't walk here because I was still recovering from a broken foot. 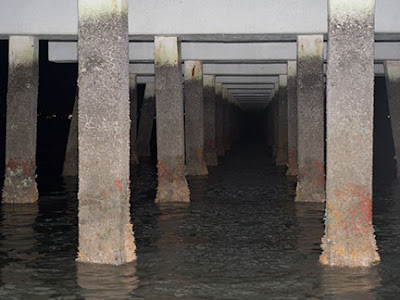 At very low tide, the colourful animals growing on the jetty legs are revealed. This includes sponges, hydroids, soft corals and other encrusting creatures. 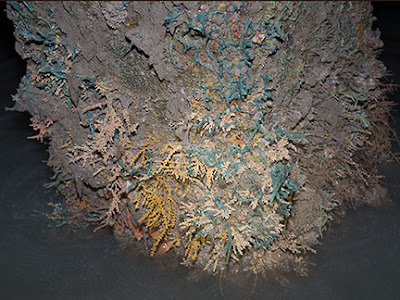 Among the interesting animals growing here were several Pink flowery soft corals (not bleaching) and a few tiny sea fans.

Sometimes, looking at the colourful animals, we may miss out large well camouflaged animals like this Sally-lightfoot crab. But I didn't see as many animals as we did during our last survey in Jun 2013. 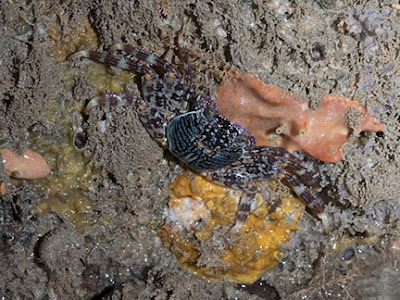 I started with the freshly laid sandy shore in front of a canal. The only thing I saw was this Spiral Babylonia snail. It was half buried in the sand with its siphon out, similar to what Bonnet snails do at low tide. 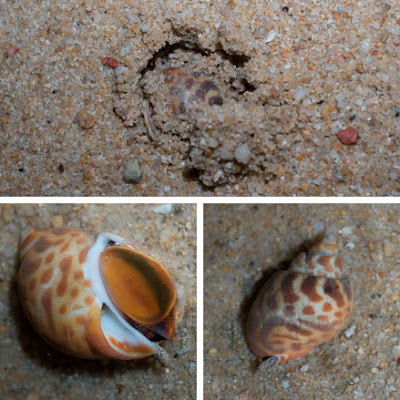 There were lots of little Horn-eyed ghost crabs on the shore. These scavengers are really fast moving and hard to photograph. But this pair was distracted by a dead fish. 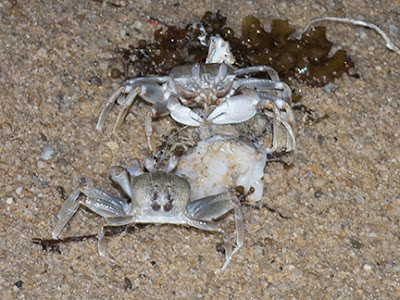 We then hopped over to a seagrassy shore. It was dark and the tide not that low so I couldn't really compare the seagrass situation with our last survey here in May 2015. I sense it is about the same. There were still lush growths of Needle seagrass (both narrow and broad leaf blades) and Spoon seagrass (large leaf blades). Although there was a strong anoxic smell near the mid-water mark, and I saw many seagrasses with transparent leaf blades (bleaching. We first saw these seagrass patches in Jun 2013. 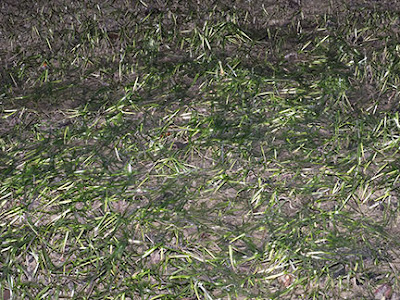 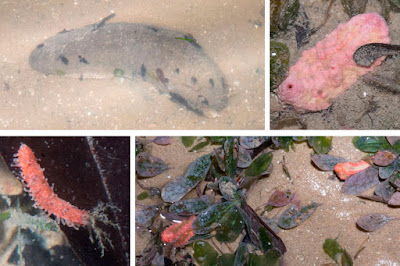 I didn't see any live sand dollars or sea urchins, but there were many skeletons of dead ones in the seagrass meadows.

For the first time, we saw a few Common sea stars. They were all rather small (about 8cm in diameter) and we think they only recently settled on the shore. 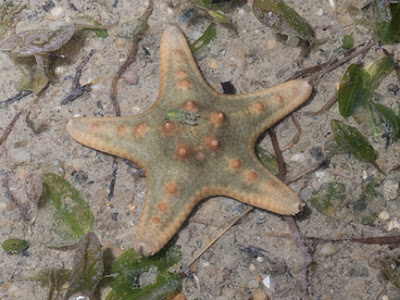 There were many small fishes too. Among the interesting sightings was a Milk-spotted pufferfish and young Trumpeter perch.

There were several Fan shell clams, Window-pane shells. I saw one Hammer oyster and one Black-lipped conch. But today, we didn't see any Fig snails. 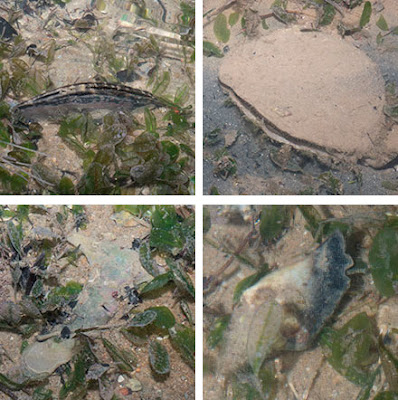 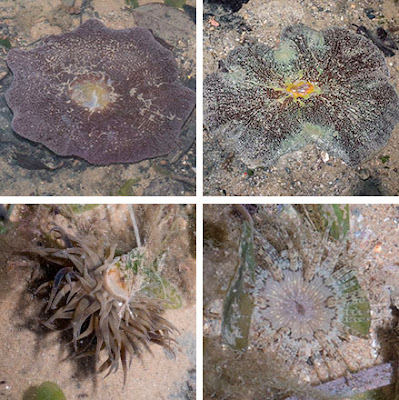 The Orange-striped hermit crab is the most commonly seen on our shores. 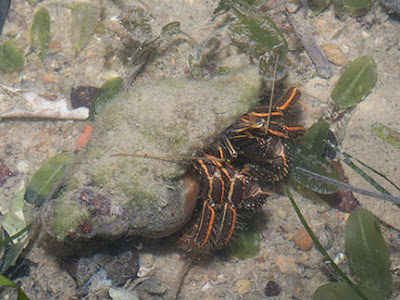 I also saw many Tape seagrass leaf blades washed up ashore, including one leaf blade that looks like Sickle seagrass. Are these growing in deeper waters off the shore? 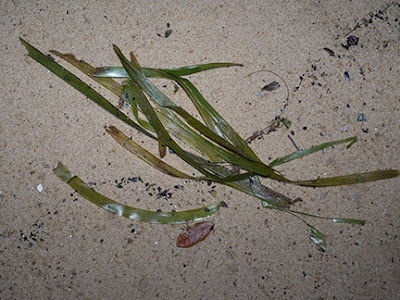 On the high shore, I also saw many different kinds of mangrove propagules washing up. Including some from species less common in Singapore like Tumu berau and Tengar. 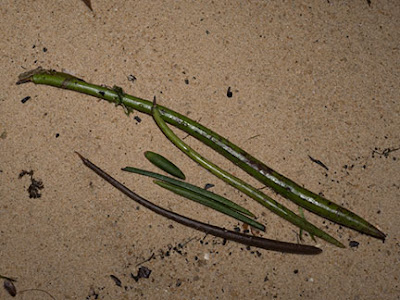 Sadly, this shore also has some trash on the low water mark. Which means this doesn't get cleaned up with the daily beach cleaning. 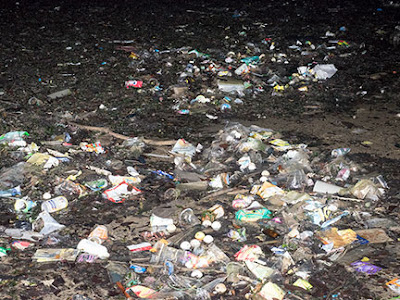 A closer look at the trash: golf balls, and plastic from shore visitors. 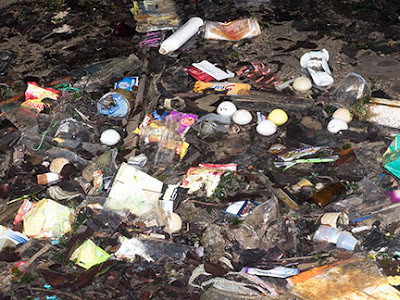 Lisa spotted what looks like someone laying a net way in the distance off the shore. Oh dear. Even here, netting is going on. 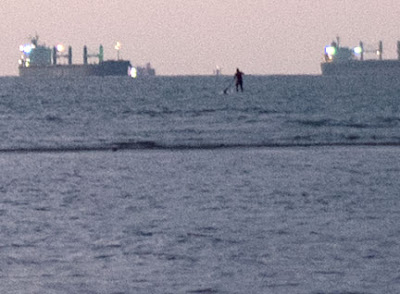 The sun rose and the tide turned. The rest of the team went straight to work! I salute them. I'm no longer young enough to do that anymore.