A glorious sunrise over Chek Jawa! The team conducts this survey of the Chek Jawa coral rubble area once a year. To check, among others, whether it has recovered from the devastating mass deaths in 2007 which wiped out the sponges and many other animals here. 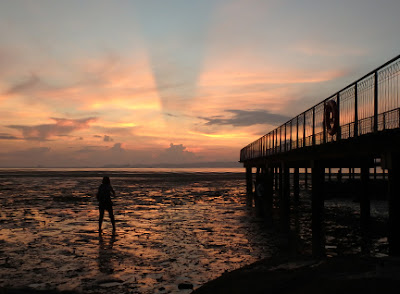 This year, we are joined by volunteers from NParks this morning. Besides checking out the rich shores of Chek Jawa, we also removed a long net that that trapped many fishes, crabs and other creatures.


I'm so impressed that ten Ubin NParks volunteers have made it to our ungodly early morning trip to Chek Jawa. Thanks to Alan Tan for arranging for them to come along. 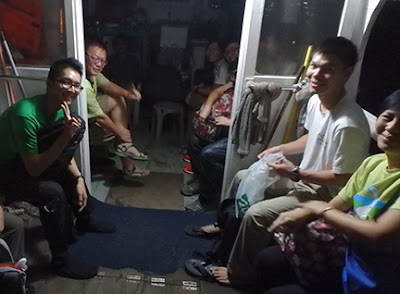 Haddon's carpet anemones are still abundant on the shore. I only saw one that was bleached, it was near the boardwalk. 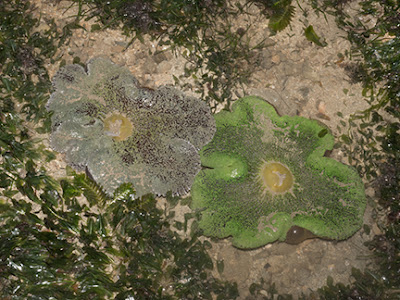 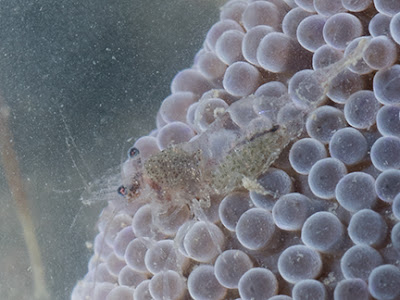 Yi Feng found this Snaky sea anemone! These used to be more common on Chek Jawa before the mass deaths in 2007. 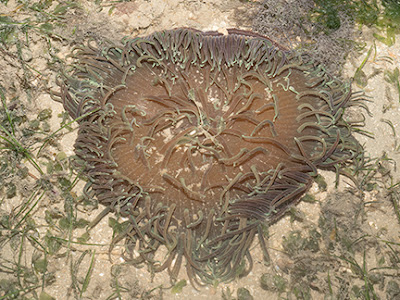 There were many seapens of various kinds. These burrowing colonial animals love the silty soft shore. Little porcelain crabs were living in some of them. 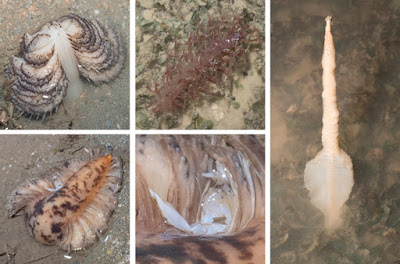 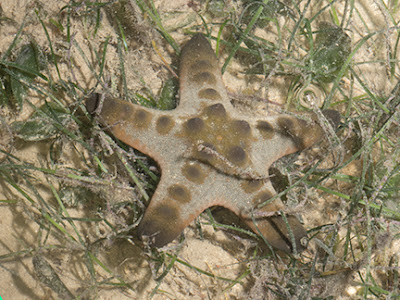 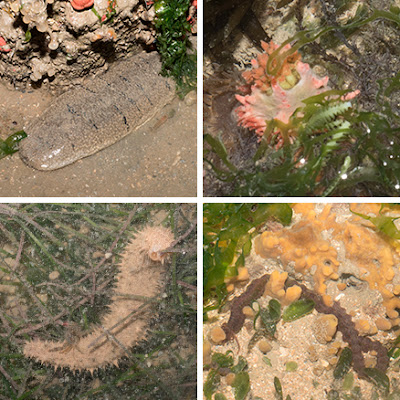 Brittlestars are abundant on the shore but retract quickly into hiding places. This large Blue-lined britterstar was well outside its burrow and upside down. Getting ready to release eggs or sperm? 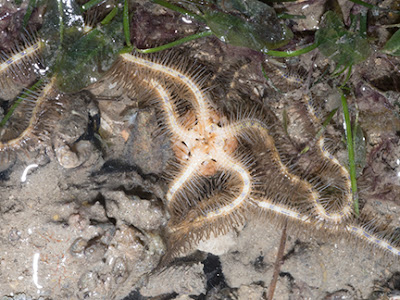 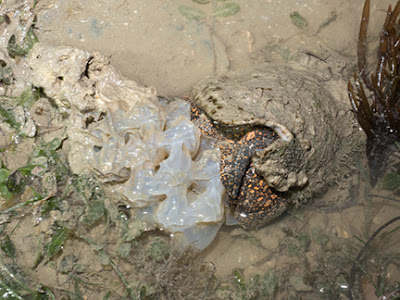 The only nudibranchs I can find are huge ones. Like this Spotted foot nudibranch. I also came across an Ornate leaf slug. While the rest found sea hares and other slugs. 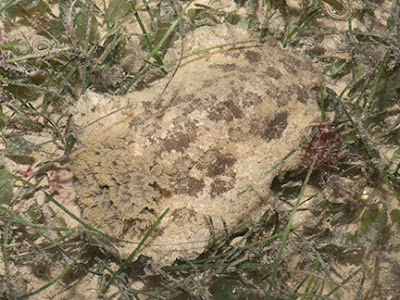 At night, it is easier to document fishes. Jian Lin did a great job on them. Among the fishes I saw was a pregnant papa Estuarine seahorse. Also some Pink-eared Emperors, and a large Black eel-tail catfish.

We had to watch our step as there were many stingrays in the water! Like this small pretty Blue spotted fantail ray. 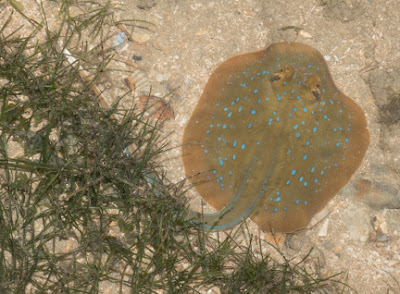 I saw many Penaeid prawns in the seagrass meadows. Among the interesting crabs we saw was a Velcro crab.

The jetty legs are coated with all kinds of encrusting animals like ascidians. These are eaten by flatworms: Blue-lined and Blue spotted. We also spot cowries here.

I saw a few Boulder pore corals. They looked alright, they were not bleaching. I did not see much soft corals and sea fans that I saw on our last survey here in Jul 2014. Perhaps it was also because the tide was not as low as we expected it to be. 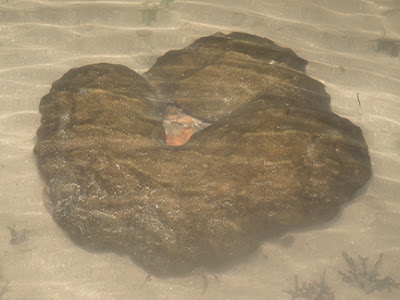 Coral rubble is a great place for seaweeds, sea anemones, fan worms, sea cucumbers and other creatures to settle on. But the diversity of sponges and number of sponges on the shore remains low. It is probably just as bad or worse than our survey in July 2015 which was already worse than what we saw in Jun 2014 and Aug 2013. 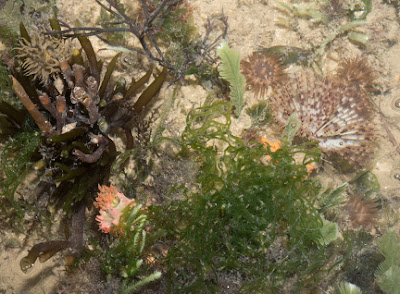 There were a few Branching purple sponges, and some Spiky ball sponges. 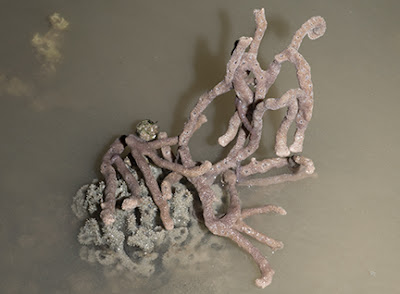 I only saw a few small clumps of sponges. 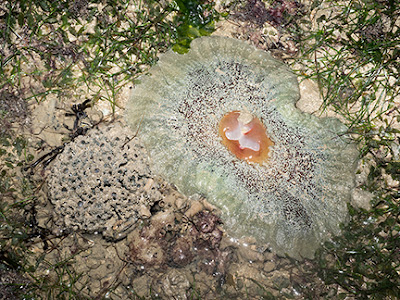 The seagrasses were lush along our survey route. Mostly Spoon seagrass (big and small leaf blade) and Needle seagrass (skinny leaf blades). Yi Feng spotted a clump of Tape seagrass which was a bit cropped (similar to what we saw in Jul 2015). I saw a few patches of Fern seagrass.

How lovely to come across dugong feeding trails! 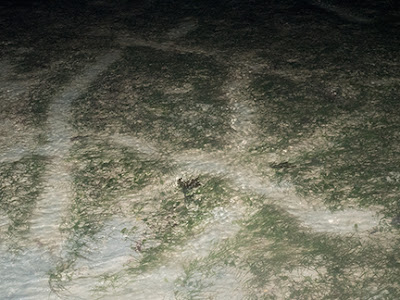 Dugongs are air-breathing mammals and will drown if trapped in the net. That's why it was particularly disconcerting to come across a long net on our survey today. The net (red line) was laid in a straight line near the boardwalk entrance to the sand bar. The net was about 200m long. The yellow line was the route I took with the volunteers on our survey of Chek Jawa this morning. 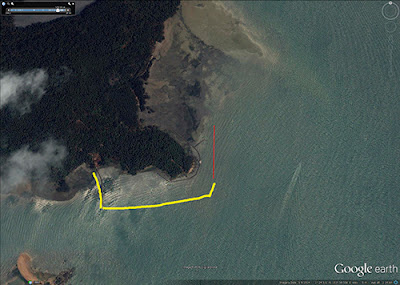 Checking the net for animals trapped in it. 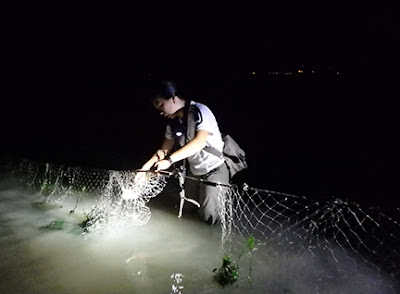 Thanks to many hands, we managed to remove the entire 150m long net and release all the animals that were trapped in the net. More on the Project Driftnet blog. 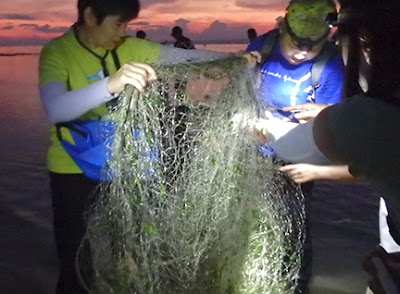 Thanks to NParks for permission to do these predawn low spring tide surveys of Chek Jawa, specially to Alan Tan for all the arrangements. Thanks also to Chay Hoon for making all the transport arrangements. And the team for helping to cover as much ground as we can during the narrow low tide window. Thank you!

More from others at the survey


Others who came on the survey: sgbeach bum, Lisa Lim.
Posted by Ria Tan at 2:27 PM