A magical sunrise at Chek Jawa! And a brief survey southern Chek Jawa from House No. 1 to the Beacon. 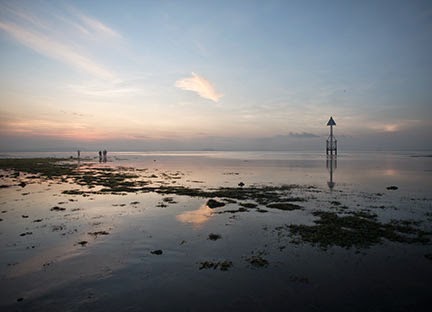 Thanks to Dr Chua Ee Kiam for inviting me and NParks for having me on this special trip.


We arrived well before dawn. The lights on Changi from House No. 1 with Pulau Sekudu. The waters are really calm in the mornings! 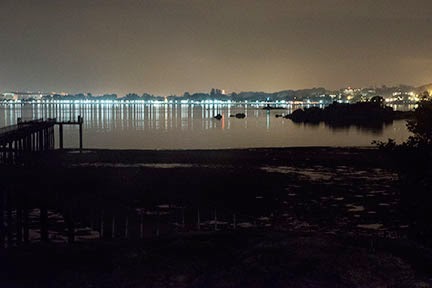 There are some sponges under the House No. 1 jetty. But I couldn't survey much deeper as the tide isn't very low today. 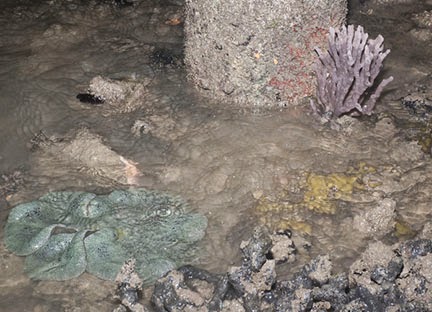 The yet-to-be-identified Posy anemone was the most abundant anemone on the coral rubble near the Beacon. There were a lot of Haddon's carpet anemones, especially in the seagrass meadows, but also on the coral rubble area. I didn't see any that were bleaching. 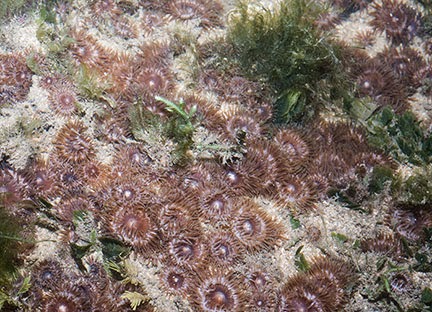 Oh, Dr Chua and his team found a lot of  sea stars. Several Knobbly sea stars, many Biscuit sea stars (which were the most abundant sea stars I saw today), one Painted sand star and one Cake sea star. 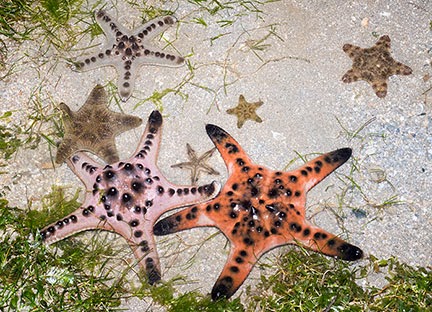 Here's a medium sized fish that I saw in the coral rubble today. Possibly a kind of grouper? There were also some small juvenile perch, rabbitfishes and emperors among the seagrasses. 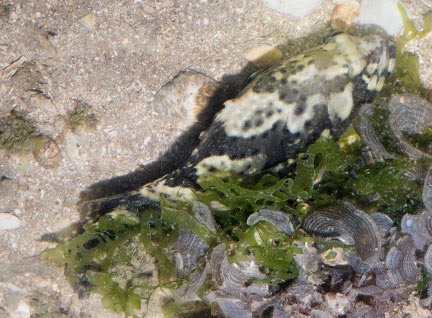 I only saw a few kinds of sponges near the Beacon, and not many of them either. They were mostly Yellow horn sponges and Yellow bumpy sponges. I couldn't find any hard corals, but the water was rather high. I saw one colony of Spiky flowery soft corals. 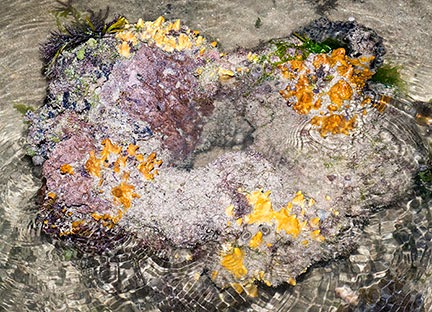 This small patch of Button zoanthids had several other animals living among them including a fan worm and a Shy glass cerianthid. There were also many Flowery sea pens, Spiky sea pens and a few Common cerianthids. 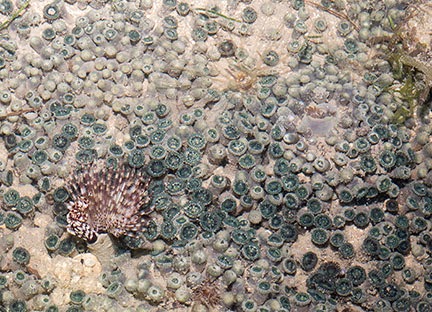 I only saw a few small sea fans. This Candelabra sea fan had tiny Colourful brittle stars on it.

I only saw one small Reef octopus. 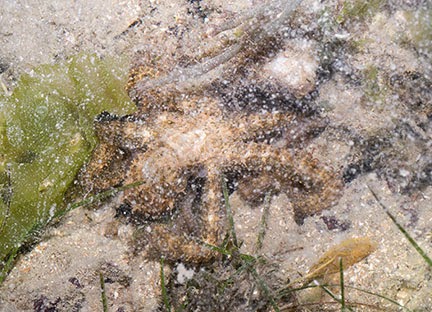 I noticed a large patch of long leaved seagrasses. They turned out to be wide-leaved Needle seagrasses! The other commonly seen seagrasses were there too and they seemed fine. None of them were bleaching. There was also a good assortment of seaweeds. None of the seaweeds were blooming. 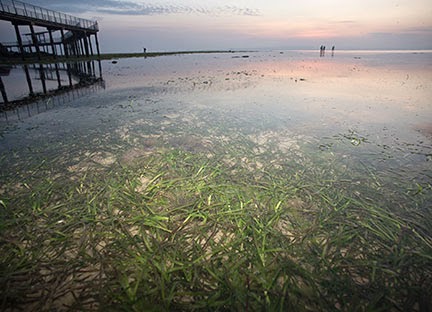 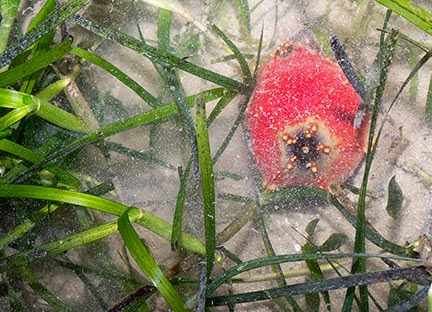 The only slug I saw was an Ornate sea slug. But I'm not good at finding slugs. 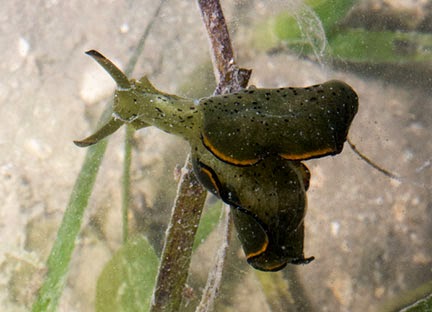 Some of the 'legs' of the boardwalk are festooned with colourful marine life. 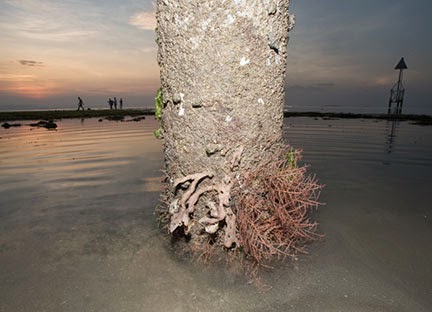 The main purpose of the trip was to take sunrise photos! Here's the boardwalk with Dr Chua and his team on the horizon working hard. 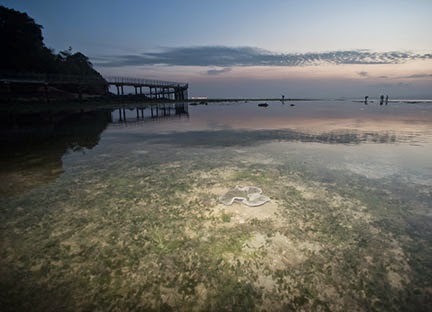 On the other side is Pulau Sekudu and the House No. 1 jetty. 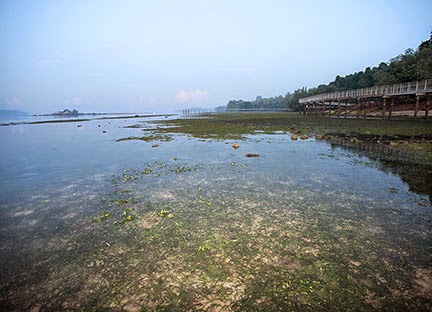 Another special treat! Dr Chua made arrangements for us to view and photograph Thomson Rock by sea. 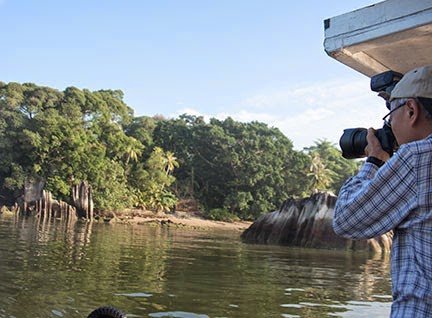 This rock is made famous by John Turnbull Thomson's 1850 painting: "Grooved stones on Pulo Ubin near Singapore."
What a lovely view of Thompson Rock and the surrounding sculpted rocks. 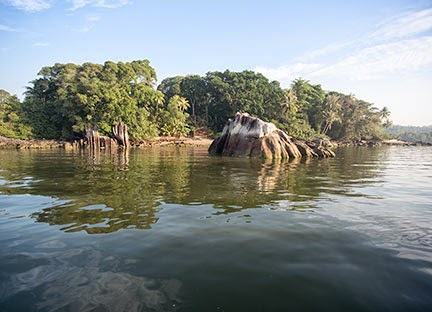 The location also provided a different perspective of the Ubin Jetty and the little walkway opposite the old Civil Service Chalets. 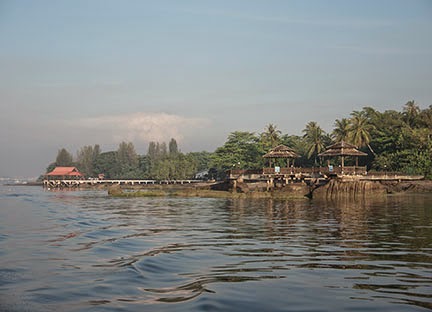 And everything in one pano.
On the way home, the water is rather brownish. Suggesting an ongoing plankton bloom. 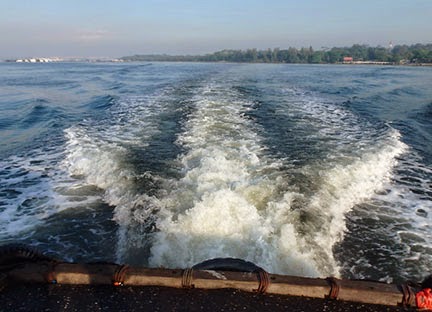 Dredging is still going on at Changi Creek. 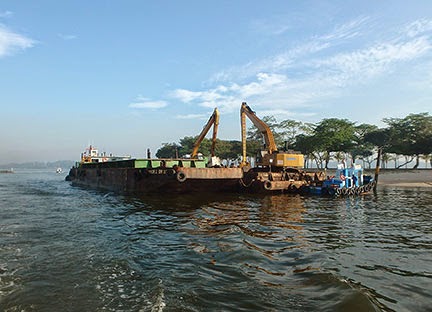 Thanks to Dr Chua and his team, and Mr Wong and the NParks team for inviting me for this special trip! Dr Chua inspires me with his inexhaustible energy, creativity and generosity. When I grow up, I want to be like him. 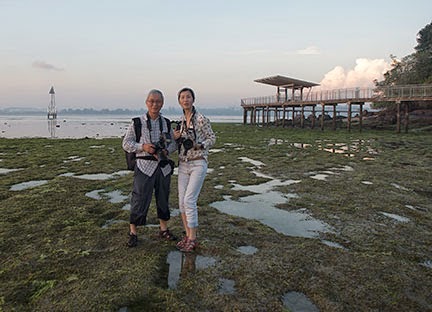 The predawn low spring tides have begun! More morning trips the rest of the week. Tomorrow, we return to Changi!
Posted by Ria Tan at 2:35 PM