It's finally come true! Our dream for Singapore's very own natural history museum!
This morning, a group of people who had been working on this dream for the longest time, gathered for the launch. I was privileged to be there, and to get my first look at the awesome Museum! The museum opens to the public on 28 Apr!


In the brief speeches, Prof Peter Ng, Ambassador Tommy Koh and the President shared the heart-stopping 45-year journey of the irreplacable and priceless Raffles Collection which was nearly thrown away, and finally found a permanent home in the Lee Kong Chian Natural History Museum. Thanks to the intervention, support and tireless efforts of many many people. 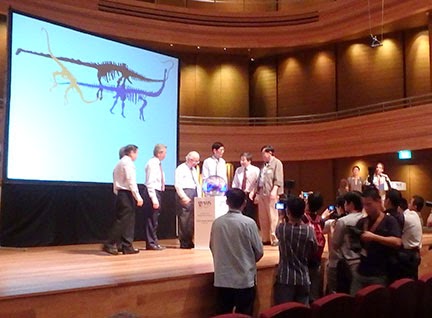 This is a rare photo of Prof Peter Ng, Director of the Museum (left) with a smile. With him, Prof Wee, Mrs Koh and Joseph Koh, all strong supporters of the Museum. 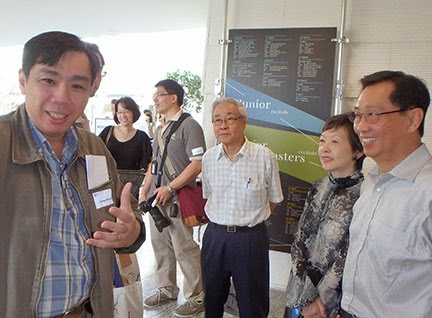 I surprised the behind-the-scenes team with this photo. They and many other worked hard every day at the Museum for the last long years, making this momentous occasion possible. Bravo! 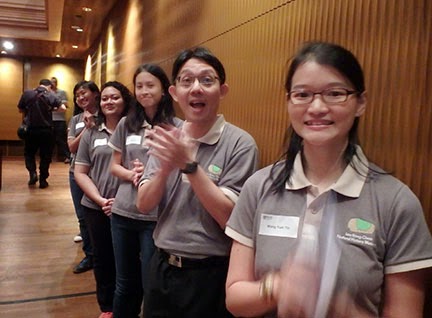 And then it was time for my first view of the Museum. Plants are a big feature at the entrance, with a life-sized Rafflesia! 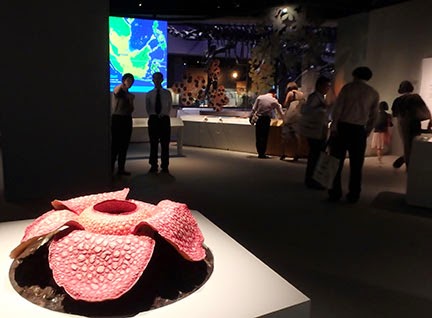 The dodo looks up to the dinos! The centre piece of the museum is the dinosaur family: Apollo, Prince and baby dinosaur Twinky. It is truly awesome to view these dinosaurs that were made possible by private donations (NO taxes spent on them). More about how the dinosaurs were funded and why it's important for the Museum to have dinosaurs. 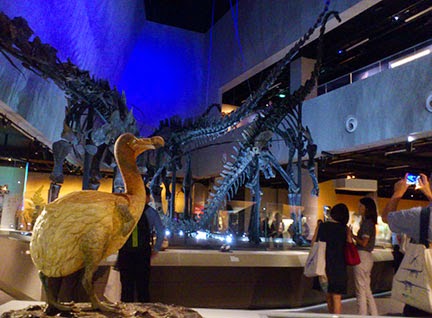 Almost everyone who gets a closer look at the dinosaurs at the upper floor remarks how small their heads are compared to their enormous bodies. Their heads are not much bigger than our heads! This is the wonderful effect of actual specimens. 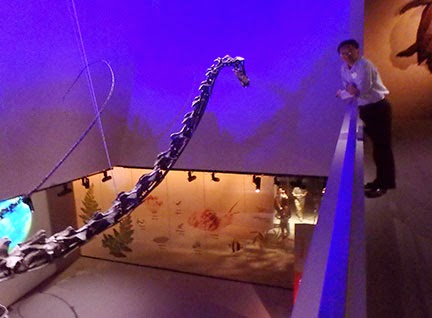 Of course my favourite exhibits was the marine section. With gianormous fishes, lots of lovely video clips and engaging interactive elements to learn more about the underwater marvels of Singapore and the region. 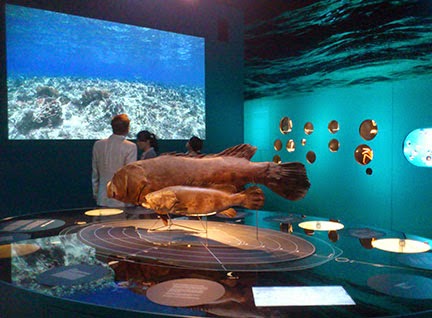 Here's Biswajit next to the Neptune's Cup sponge that was thought to be extinct until it was rediscovered in Singapore recently! 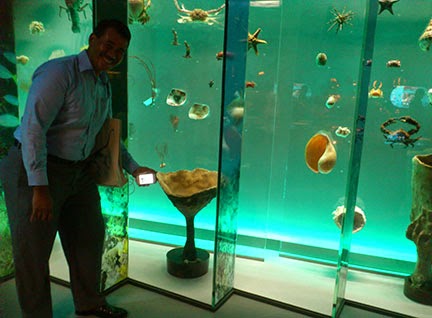 A great section on geography with rocks which the intertidal survey team helped to collect from some of our remote offshore islands! 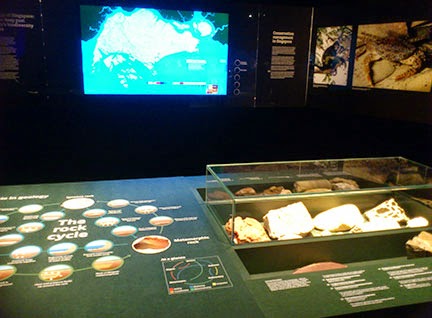 The museum came to life with the wonderful explanations by enthusiastic and knowledgeable museum volunteers. Here's David "Dead Bird" Tan sharing about birds. 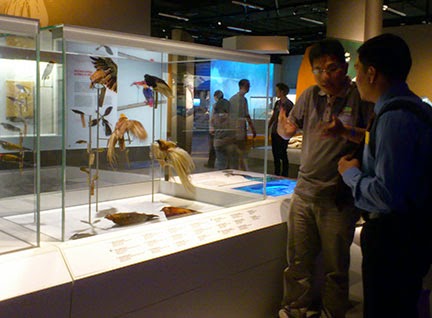 Here's Ivan Kwan sharing more about the turtles and tortoises of our region. He is one of the many many volunteers working hard today. I couldn't take photos of all of them. Here is person behind the restoration of humungous creatures like the crocodile, orang utan and more. The talented Kate Pocklington, who arrived in Singapore three years to this date, to do this job. Which was done magnificently! 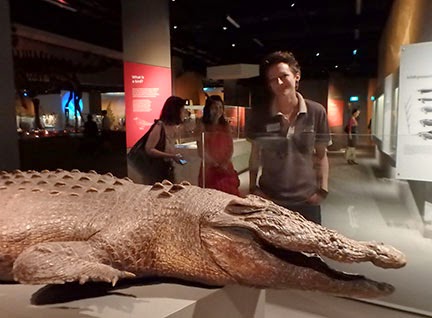 I was so glad to see the old Raffles Museum of Biodiversity and Research set up was still available upstairs. This is how specimens are kept to save on space. A museum is like a library of 'books', with vital information. At the time these beasts were collected, we didn't know how to 'read' DNA information. But because we have their bodies, we can 'read' this information, decades later. This is why we need to collect and kill animals. Just a teeny tiny proportion. So that we can learn more about our biodiversity and thus to protect them. 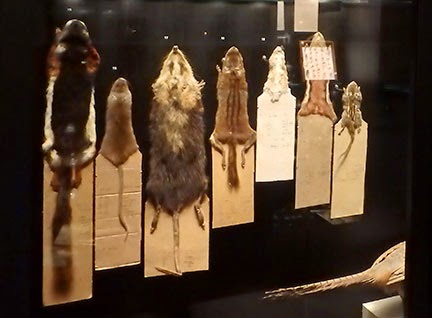 It was nice to see the Siglap sea turtle. And a poignant photo of the Whale Bones that used to hang from the ceiling of the National Museum but which Singapore gave away. 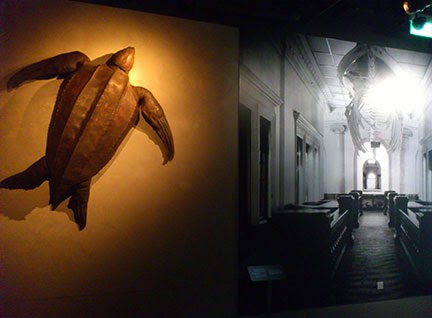 There are little cabinets in the display with surprises when you open the door. This one is of the bird, and the photograph of the bird that was used in the old bird series of our $1 bill. 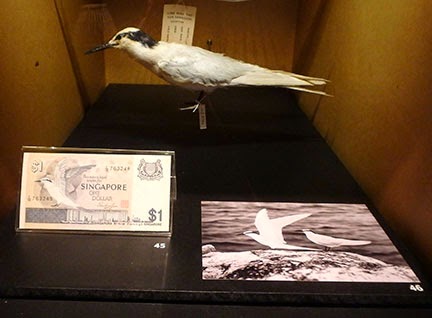 In another little cupboard, a display showing how birds are studied and mounted. 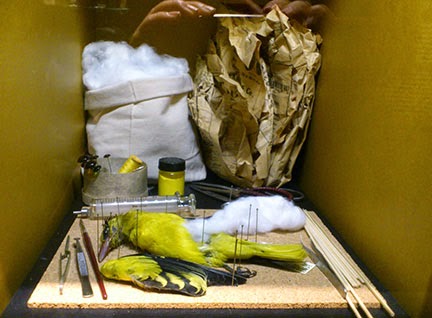 There are also exhibits on important issues. 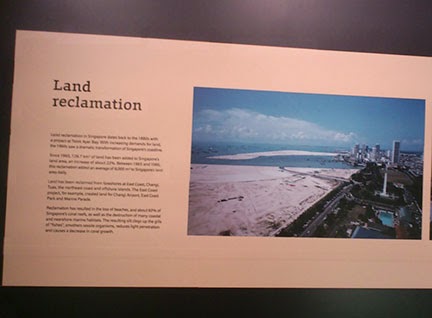 Here's some of the weird and wonderful specimens that I saw at today. 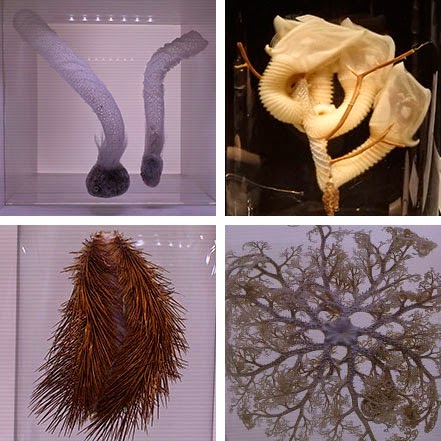 It is so appropriate that in the section on the Raffles Museum of Biodiversity Research, we met Prof 'Paddy' Murphy who taught many generations of biologists and ecologists. Everyone wanted a photo with him. 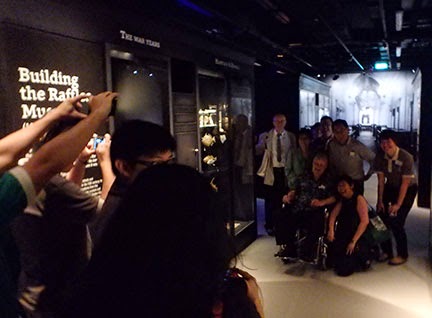 At the Museum Shop, there is the skeleton of the dolphin that washed up at East Coast Park beach last year (Jul 2014) and which the Museum salvaged and preserved! So please, inform the Museum if you see any dead wild animals on our shores or on land. Don't let them die in vain! 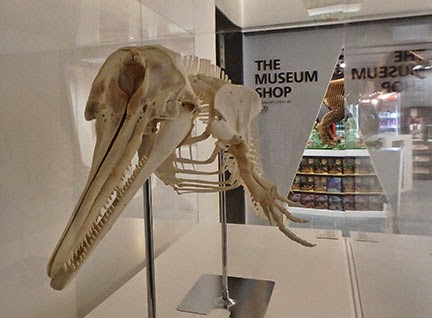 A book has been written about the Museum's journey! 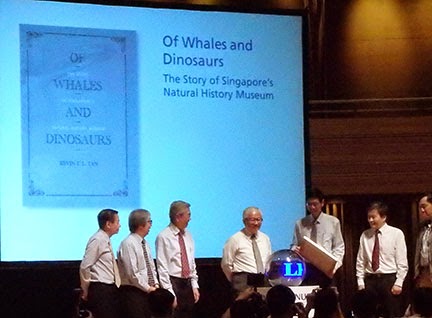 "Of Whales and Dinosaurs: The Story of Singapore’s Natural History Museum narrates an intriguing tale of the biological collection’s struggle and change spanning more than a century.
Author Dr Kevin Tan, an NUS law alumnus and Adjunct Professor at the University’s Faculty of Law, recounts the extraordinary 127-year history of biological specimens which survived mostly intact through the multiple challenges of the 19th century, the devastation of World War II, and potential disintegration in the 1970s. During the first two decades of Singapore’s independence, the government focused on nation-building and other priorities, while the country’s natural history took a backseat.
The dedication and efforts of a few stalwarts helped save the precious items before they were consigned to oblivion. The subsequent creation of the Lee Kong Chian Natural History Museum resulted from the tenacity and mettle of the individuals who looked to the long-term, and overcame the odds to protect Singapore’s natural history heritage." From NUS News.

The author is beseiged for autographs! You too can meet the author on 29 May (Fri) evening for a tour of the Lee Kong Chian Natural History Museum, with a focus on its Heritage Gallery, followed by an author talk by Kevin Tan. More details here. 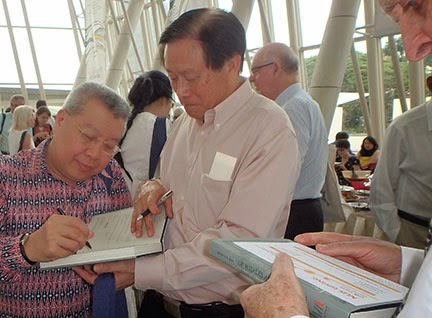 From the reaction of this family, it is clear that the Museum is engaging for kids and families too. Sean Yap is here explaining more about the insects that he loves. 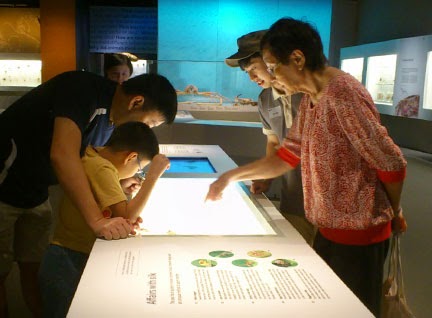 It's nice to see that the displays are low enough for kids to view! 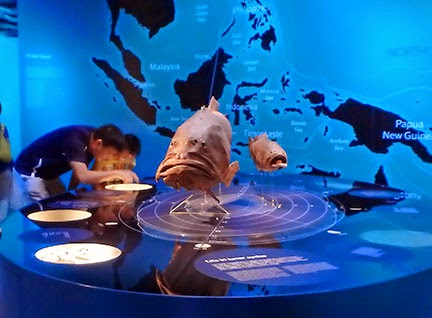 It was tiring to walk around the exhibits and even more tiring to stand and talk with visitors. David and I sat down and became the living fossils display. So come and visit the Museum when it opens to the public on 28 Apr (Tue). More details on the Lee Kong Chian Natural History Museum website.

Previous posts about the Raffles Museum of Biodiversity Research