Why Pasir Ris mangroves are special!

Unlike Sungei Buloh, we can explore the boardwalk at Pasir Ris in the evening! And encounter strange behaviour generally only seen near sunset and at night. 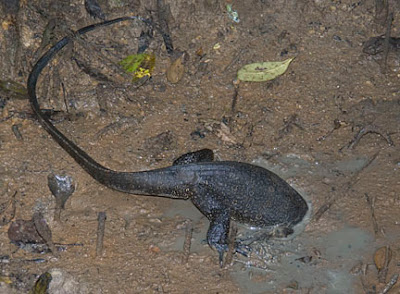 Today for the first time, I saw a water monitor deep in a hole! What is going on?!

Just as I started my little stroll on the boardwalk, right beneath me I noticed this small Malayan water monitor (Varanus salvator) next to a tiny hole in the mud. 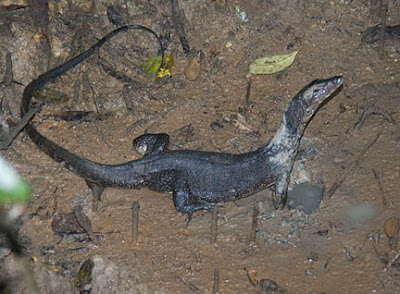 I watched in amazement as the lizard stuck its nose into the hole. 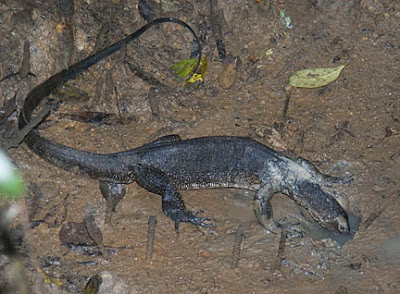 Then it's whole head. Then shoving its first pair of legs and its body as far into the hole as it could. 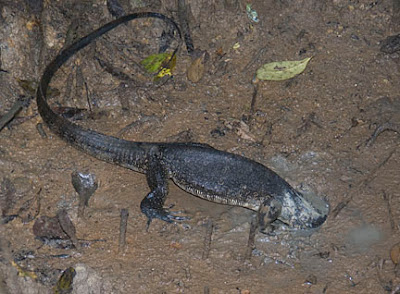 It stayed down for quite a long time! Then it started to dig. 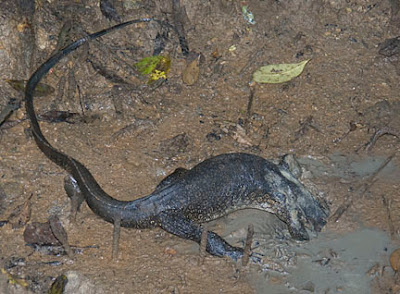 It didn't manage to catch anything. But it kept diving in and digging. I left it alone as I didn't want to disturb it. What was it hunting? In my exploration of the boardwalk, I came across many small creatures that might have made a nice monitor snack.

Pasir Ris mangroves is small, but has a lovely boardwalk running through it. There are lots of very informative signs that encourage us to look, listen and learn. It was raining when I arrived but the weather soon cleared. 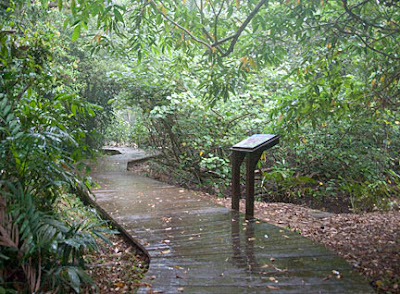 There are some signs of recent mud lobster activity, indicated by a fresh grey 'lava' flow from volcano shaped mounds. These mounds and the mud is riddled with holes. 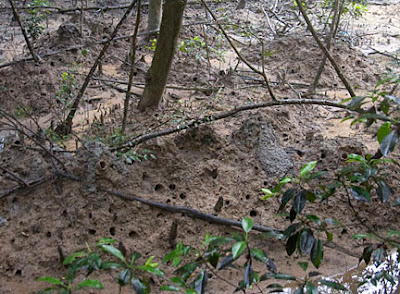 These seem to be made by Tree climbing crabs (Episesarma sp.). These crabs are much larger and more abundant at Pasir Ris than I usually see elsewhere! These sure look crunchy and delicious, for a monitor lizard. 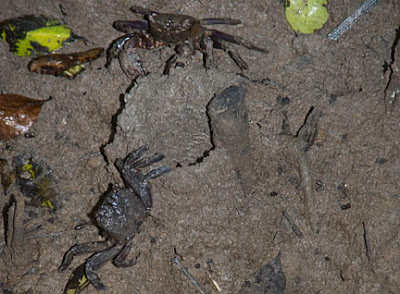 The boardwalk meanders among tall mangrove trees. Allowing us a closer look at the plants as well as the animals living in the mud and pools and streams. 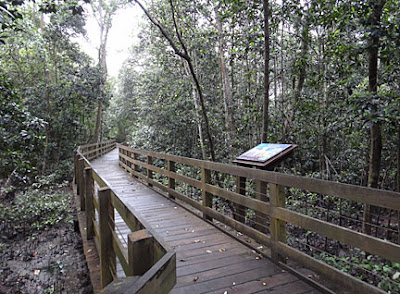 Also abundant here were humungous Giant mudskippers (Periophthalmodon schlosseri) . The fish might also be a yummy meal for a monitor lizard. As usual, the mudskippers are often near their 'swimming pools' that they excavate. But in Pasir Ris, I see that sometimes, a Tree climbing crab or two seem to share the mudskipper's pool. So if the monitor lizard is lucky it might get both a crab and a fish in a burrow?! 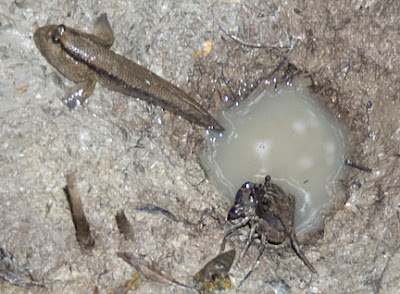 The boardwalk leads to a lovely little shelter on Sungei Tampines. It's a great spot to look at birds and fishes and snakes! 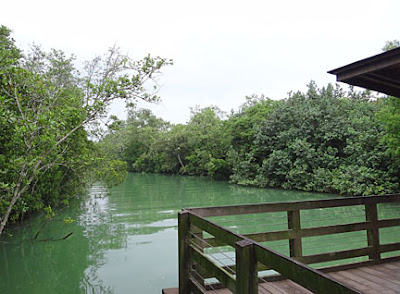 From the shelter, it's easy to view a cluster of egrets that seem to be nesting in the mangrove trees along the river bank. 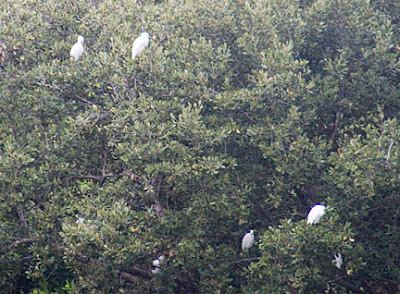 Grey herons are also nesting here. This nest was very close and easy to view. Pasir Ris is the only place I know of on the mainland where it's so easy to view these nesting birds. Especially in the evening, when the birds start coming home and there are all kinds of interesting interactions. 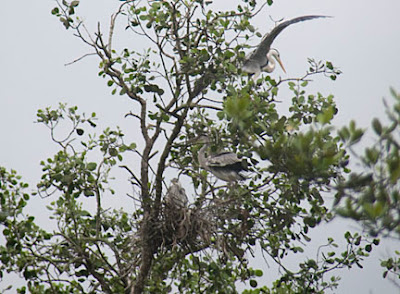 I also saw this woodpecker at the beginning of my little walk. 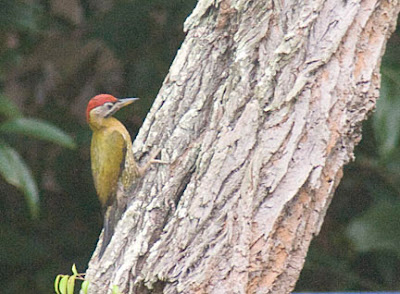 And a pair of Collared kingfishers were busy calling and hunting in the mangroves. 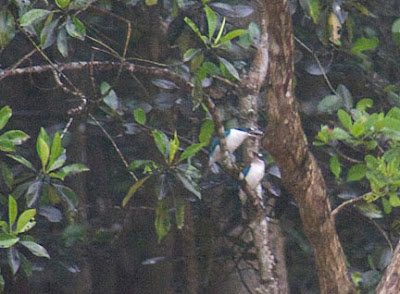 There was a tiny wet and bedraggled little Ashy tailorbird. 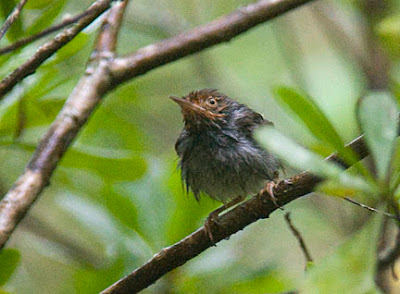 The rare Mangrove pitta has recently been seen in Pasir Ris. I didn't come across it, though I saw several photographers with huge cameras rushing past me. There's some lovely photos of the pitta on the Bird Ecology Study Group blog which also explains that "“The Mangrove Pitta (Pitta megarhyncha) is the only resident pitta species in Singapore. It is listed as critically endangered nationally and considered globally near-threatened. An elusive bird, it is normally confined to the offshore islands of Pulau Ubin and Pulau Tekong. This species is very rarely sighted on main land Singapore."

In the incoming tide, large schools of what seem to be Mullets were hanging in the water. Probably waiting to go into the mangroves with the tide. There's probably lots of nice things for the fishes to eat there. 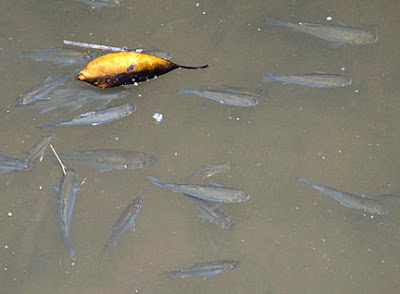 There were also large groups of big fat fishes (Tilapia?), busy browsing on the mangrove tree roots with the incoming tide. 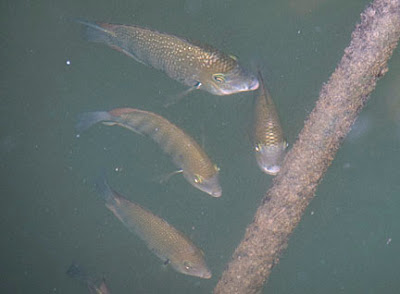 I saw a few small Archerfishes (Family Toxotidae)! Unlike the Archerfishes that we often see at Sungei Buloh just swimming about doing nothing else much under the Main Bridge, those at Pasir Ris seem to hunt among the trees. I thought I actually saw one spit to knock down a low hanging titbit from the branches! But I didn't manage to get a photo of it. 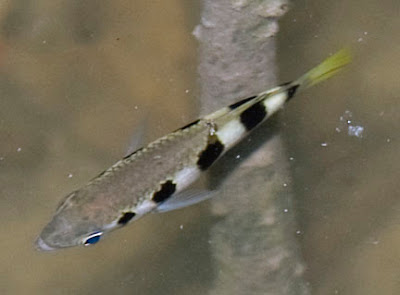 Close to sunset, the Dog-faced water snakes (Cerberus rynchops) started to emerge! Even so, they are hard to spot! These superbly camouflaged animals are quite common but are nocturnal. So Pasir Ris boardwalk is probably among the few places where you can comfortably observe them. 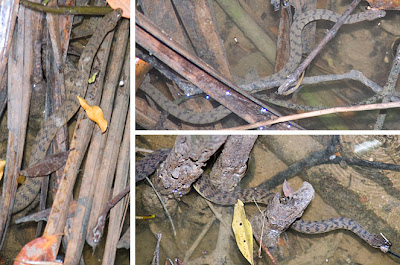 Here's a closer look at the cute face of the snake. Unlike other snakes, this water snake has bulbous eyes that stick out of its head. This allows it literally to keep an eye above water while most of its body remains submerged. It eats fishes and lies motionless among debris and sticks. If a suitably sized fish comes near, it will lunge and grab it!

As night fell, the mosquitoes came out. But they all seem to prefer to bite the mudskippers than me! I only got one mosquito bite but there were lots of mosquitoes around this poor fish! 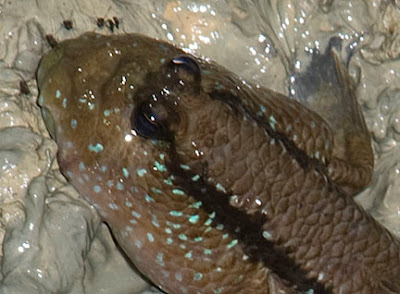 Just before I left, I saw this beautiful Atlas moth. This moth has wings with the largest surface area! It must have just hatched, after the rain stopped. It was dry and still clinging onto its cocoon. And its velvety body was pumping slowly, probably expanding to its full size. 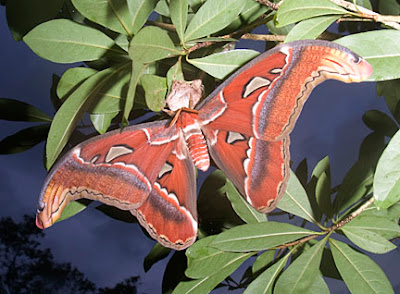 This one had huge feathery antennae. And a rich pattern on its body. The entire animal is covered in tiny hairs! This huge furry moth reminds me of a magical flying carpet! 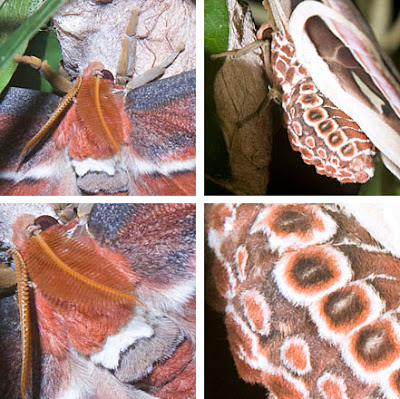 Today I saw all kinds of flowering mangroves! 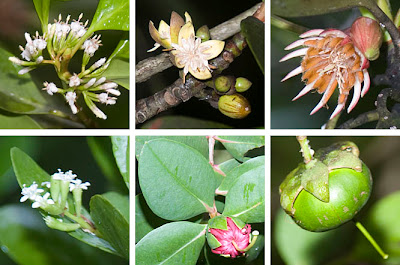 Pasir Ris is the only place on the mainland where we can easily view native specimens rare Lenggadai (Bruguiera parviflora). NParks has also planted lots of Berembang (Sonneratia caseolaris) with pretty pink flowers that only bloom at night. The trees there have grown very tall! Other planted rarities include Gedabu (Sonneratia ovata), and Tumu berau (Bruguiera sexangula.

Otters have been spotted at Pasir Ris in the past: in 2009, in 2010 and in Sep 2011 in this awesome clip shared by Nikita Hengbok - a family of four otters!
Here's a great clip of an otter seen in Dec 2011 shared by Azeoprop.
There was even a small crocodile at Pasir Ris, for a while, until it was removed.

Even though I didn't see any otters or crocodiles today, in just a short one-hour walk, I saw quite a lot of interesting mangrove life! I didn't even do the whole boardwalk and missed checking out the tower there. If I stayed on after sunset, who knows what else I might have spotted. Owls? Bats? More snakes? How exciting!

The boardwalk is a short stroll from Pasir Ris MRT station. I think it makes a great destination for an evening walk, to view interesting wild life that we can't easily see anywhere else! 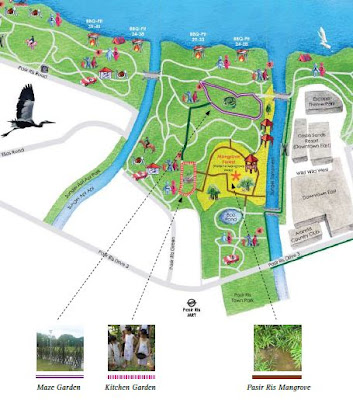 Wild places like Pasir Ris mangroves are unique, and add value to the surrounding area. For example, the mangroves at Pasir Ris are considered one of the attractions highlighted in a We Love Pasir Ris website by the The Ripple Bay: New Seaside Condo Launch @ Pasir Ris Beach.

More about how to get to Pasir Ris Park on wildsingapore and the NParks website. There are lots of regular walks and activities at the Park to join. Find out more on the wildsingapore happenings blog. 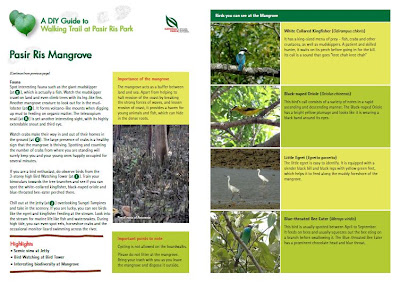 Or visit on your own with the DIY Pasir Ris Trail Guide which includes the mangrove boardwalk.

Some of my past trips to Pasir Ris mangroves