Despite a heavy downpour, these valiant folks gathered yesterday to explore a mangrove next to a MRT station. Yes, only in Singapore! At Labrador MRT station to check out Berlayar Creek. 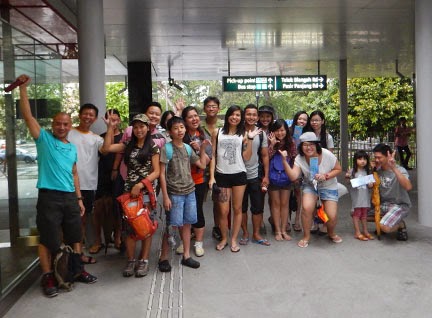 Thanks to the visitors, especially the youngest, for spotting awesome critters in this city mangrove!


All the animals we saw were spotted by the sharp-eyed and observant visitors! The most delightful find was this snake in a tree. It appears to have just eaten a gecko. Thanks to Sumita for taking the photo and finding out what it might be. It's not an Oriental whip snake, and probably some kind of Bronzeback.
Another highlight of my day was this 'bak-chang' of leaves. It's the shelter made by Weaver ants aka Fire ants. 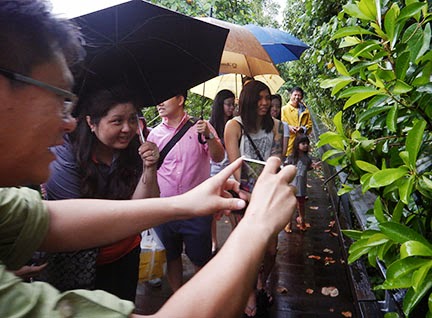 The ants link up to bring the leaves together.

The ants then use the silk produced by their babies (larvae) to 'glue' the leaves together!

A large Malayan water monitor lizard swimming lazily in the water. Later on, a smaller one was spotted by the youngest child in the group. These large reptiles are found in almost every coastal habitat in Singapore. They eat almost anything, especially dead animals. So they are kind of like the garbage men of the mangroves. 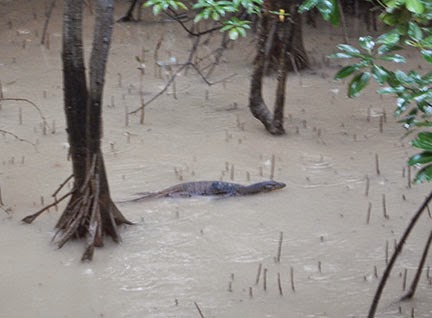 A Giant mudskipper, the largest of our mudskippers. Is the mudskipper a frog, a lizard or a fish? An amazing creature of the mudflats indeed! Earlier on, the youngest child spotted other tinier mudskippers. A Plantain squirrel was seen skipping among the trees. And we heard the calls of the Collared kingfisher as well as the quarrelsome White breasted water hen. We also saw a small spider weaving her web. 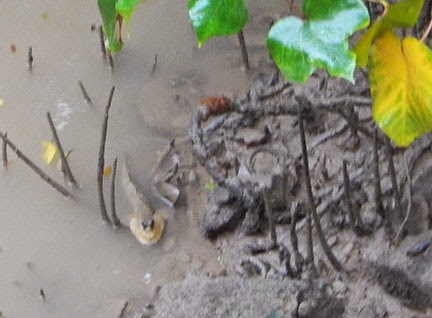 How nice to see mud lobster mounds! These mounds are important for a richer mangrove as they provide 'condos' for other smaller animals to build their homes. As they dig in the mud, the mud lobsters also improve the ground for healthier plant growth. 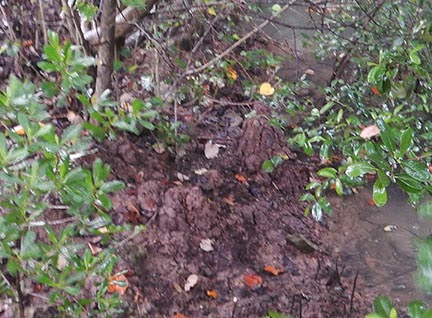 So nice to see that many rare mangrove trees like Gedabu have been planted along the boardwalk. I hope they were taken from Singapore native stocks. 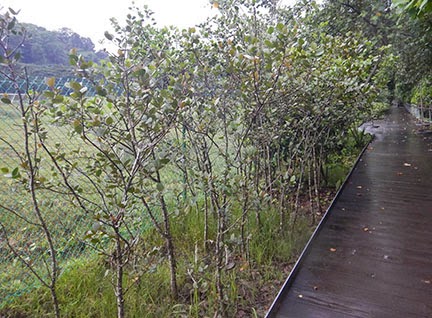 I have no idea what this plant is but is was flowering profusely and there were many that were planted along the boardwalk. 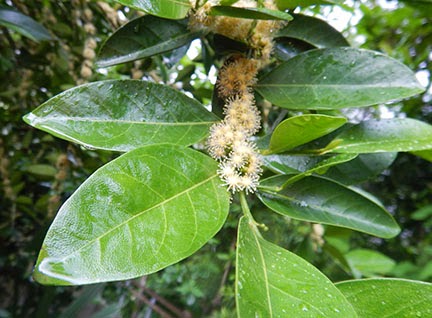 The mangrove end at the mouth of Berlayar Creek. Here we have a view of Sentosa's natural cliff and shores at Tanjung Rimau. The boardwalk goes on further towards Vivo City. NParks has a DIY walking trail guide that you can download (pdf) to explore the Creek on your own. The trail can be combined with a walk all around the Southern Ridges too! We end our walk here. 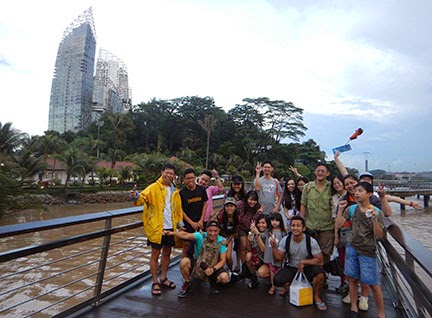 There are seagrasses at the mouth of Berlayar Creek. Here's a view of the seagrasses near the boardwalk when I monitored the shore in April 2012. 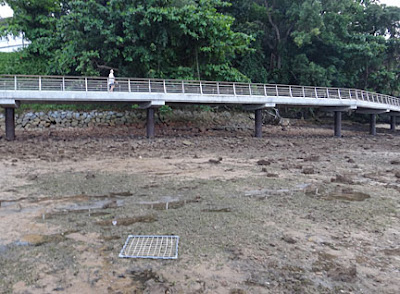 Thanks to Mr Kuet and Daphne from Pacific Radiance for gathering friends and fellow nature lovers for arranging this walk. And thank you to everyone who came for patiently waiting for the rain to stop and for spotting so many interesting wildlife. Thanks also to Mr Kuet for sharing some of the interesting history behind Labrador.

There are two platforms which stick out into the Creek so we can have a look at the trees and creatures living there. The water turns a 'teh-susu' (tea with milk) colour as the rain washes down sediments from the land. 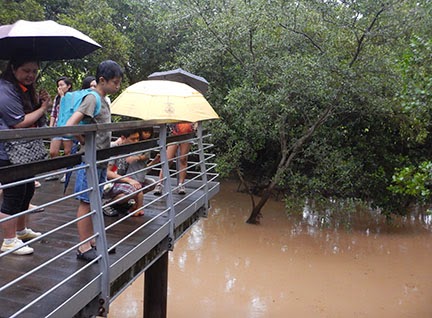 This is the usual colour of the water before the rain washed down the sediments from land. 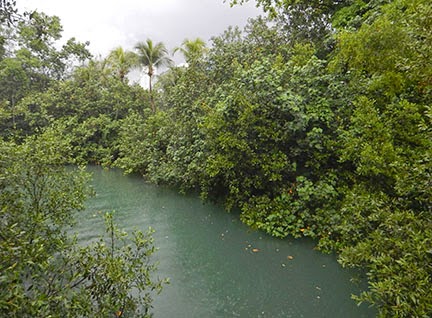 Near the MRT station, there was a party with lots of balloons overlooking the mangroves. We saw partygoers play a game involving bursting the balloons. 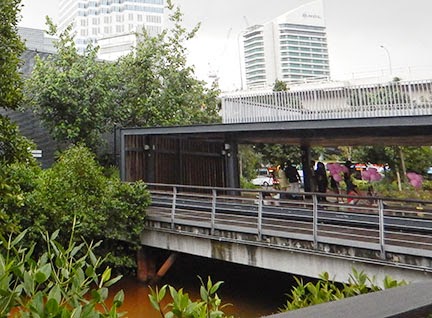 And saw one of the balloons in the Creek. Colourful burst balloons and other litter resemble jellyfish and other food that sea turtles and other marine life eat. When swallowed, these can hurt and kill sea creatures. 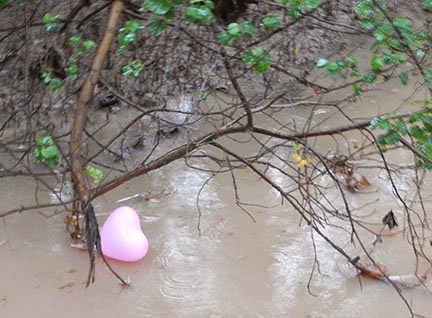 The Berlayar shore lies in front of Berlayar Creek which is next to Labrador Nature Reserve. Ecosystems seen here include mangroves, natural rocky shores, sandy shores, a bit of reefy shores at the deeper edges! More about the plants and creatures that I've seen at Berlayar. 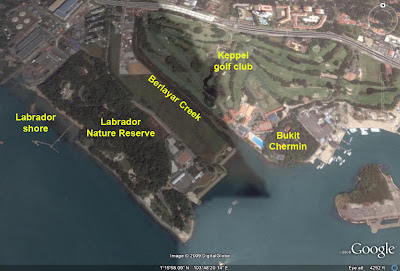 Right next to the MRT stations is a magnificent Api-api pasir (Rhizophora stylosa)! Dr Jean Yong very kindly responded to my blog post about Berlayar and shared that "most importantly, botanically speaking for Singapore, Tanjung Berlayar is the only place on Singapore mainland to have at least 10 trees of Rhizophora stylosa."

I'm so glad Sumita and I had a chance to share this special shore with our friends at Pacific Radiance.

More about Berlayar Creek.
Posted by Ria Tan at 12:33 PM