A live Cone snail has been seen in Singapore! For the first time in a very long long time! 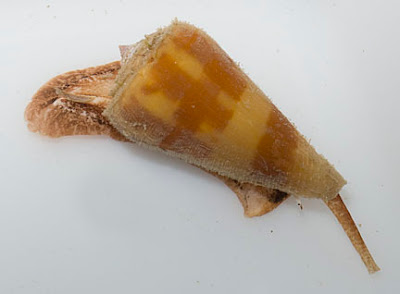 Russel Low found it on Cyrene during our predawn trip! With other finds too, but which of course, totally pale in comparison to the Cone snail! I also did a quick check for coral bleaching, and had a look at how the seagrasses were doing here.


Cone snails (Family Conidae) are venomous and their toxins can be fatal to humans! Here's a great video clip of how the cone snail hunts (lies in ambush buried in sand) and shoots a harpoon tipped with a cocktail of toxins for which there is no antidote, and swallows fishes whole. The snail is featured among the 6 Deadliest Creatures (That Can Fit In Your Shoe) by Fitzgerald Smith which has a rather graphic description of the effects of the venom on humans. Thank goodness for Russel (and his friends around him at the time),  he didn't get harpooned by the snail.

The cone snail on the underside has a narrow shell opening and a narrow foot. This is Conus magus consors (thanks to Tan Siong Kiat for the correction) one of the 23 cone snails recorded for Singapore. 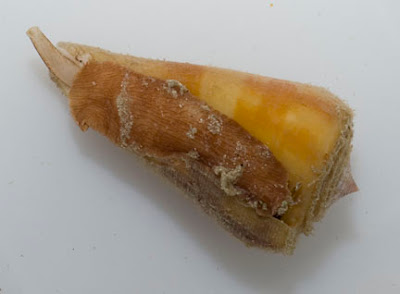 We also saw many of these large Olive snails (Oliva miniacea) which so far, I've only seen on Cyrene. These harmless snails may be mistaken for Cone snails, but you can see that the shell is more bullet-shaped rather than shaped like an ice-cream cone. But if you are not sure, it's best not to handle any live snails that are conical!! 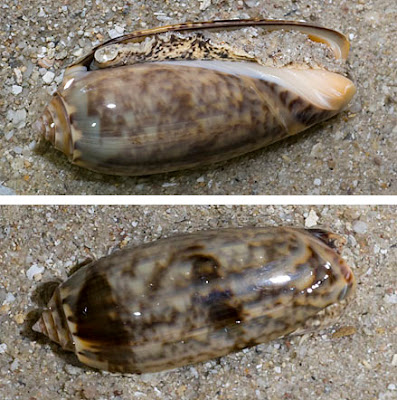 Before the cone snail was found, the fabulous find of the day was this Critically Endangered Ram's murex (Chicoreus ramosus) also found by Russel. It's my first time seeing one, although recently it has been seen on Changi and one was found diving during the Southern Expedition. Kok Sheng also found several Eggwhite moon snails (Polinices albumen). We also found some strange bivalves and a few other snails that we don't commonly see. 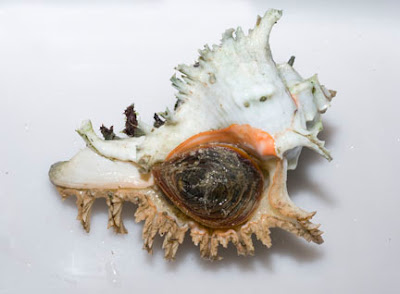 At first it thought this might be some cool cowrie that I've not seen before. With a white spotted mantle covering the shell? 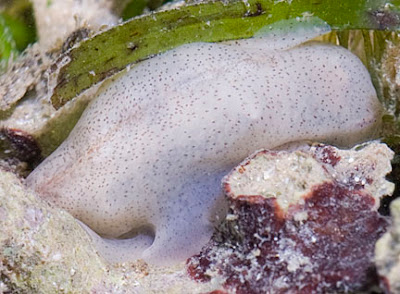 Wow, it turned out to be a very fast moving flatworm. It's nearly transparent when it's all stretched out. I've not seen this kind of flatworm before. 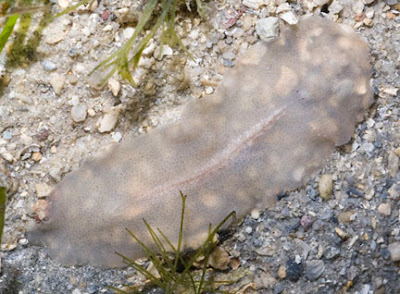 Another first for me, a Pygmy squid (Idiosepius sp.) with green stuff in its belly. Did it just eat a green shrimp or something? 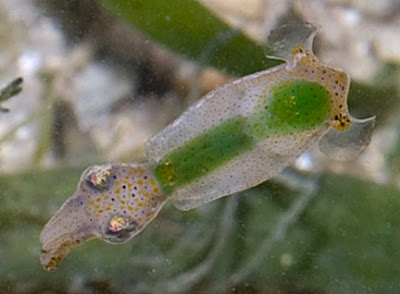 I also took the opportunity to briefly check the reefy parts of Cyrene for coral bleaching. It was hard to check because the tide wasn't very low and it was rather windy making it difficult to look through the water, even though the water was clear. 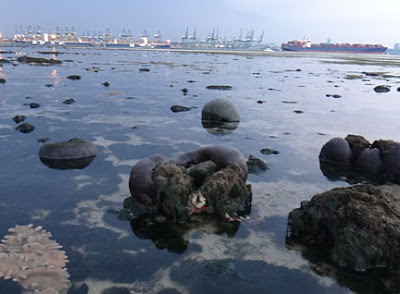 There were many Pore coral (Porites sp.) and they all seemed fine.

I saw several Favid corals (Family Faviidae), some of them large colonies. Most seemed alright athough some had dead patches. 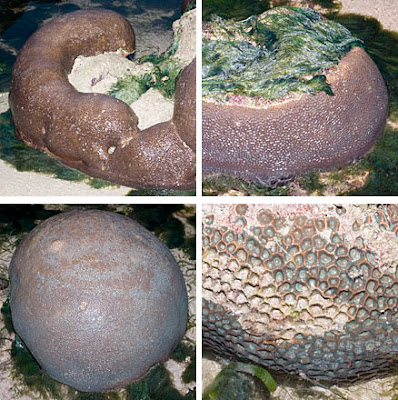 I saw many leathery soft corals (Family Alcyoniidae) and none of them were bleaching. There was one with the upperside covered in a 'skin' that was peeling off. Another colony had a layer of black layer on the underside. 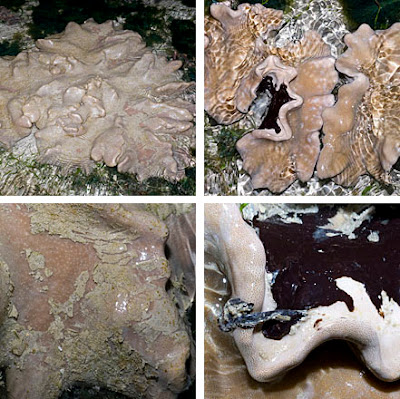 Most of the Asparagus flowery soft corals (Nephthea sp.) that I saw had pale yellowish tips (instead of being all purple). But the situation is certainly not as bad as what I saw here during the global mass bleaching event in 2010. 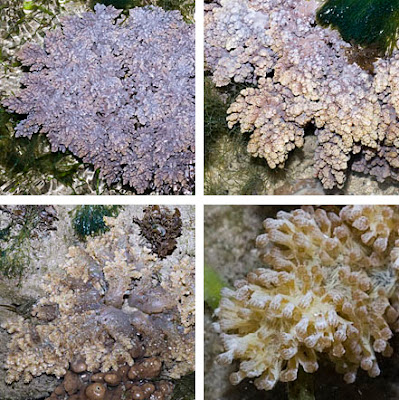 Although Cyrene lies in the middle of the industrial triangle next to shipping lanes heavily used by large container ships, this amazing submerged reefs has among the best seagrass meadows in Singapore. The seagrass meadows in some parts are still lush with patches of Bryopsis seaweeds (Bryopsis sp.). 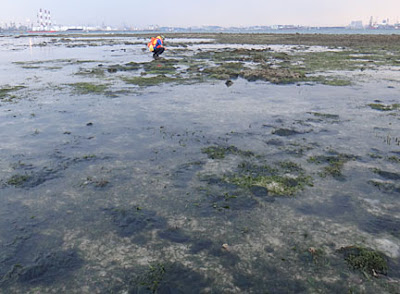 The Noodle seagrass (Syringodium isoetifolium) seem to be doing the best among the various species found here. They were plentiful, nice and green, not chomped or bleaching and not covered in epiphytes. 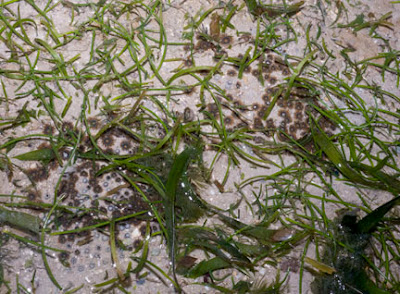 I saw several Haddon's carpet anemones (Stichodactyla haddoni) in the seagrass meadows but all of them were small. I saw a small Snaky sea anemone (Macrodactyla doreensis) on the sand bar! There were also lots of tiny Swimming anemones (Boloceroides mcmurrichi) everywhere. 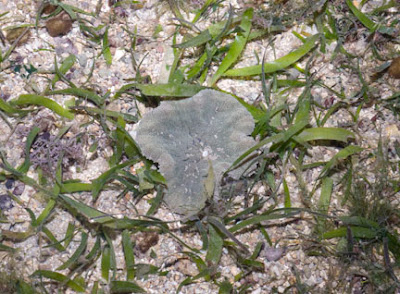 There were also a few cerianthids (Order Ceriantharia) in the seagrass meadows. 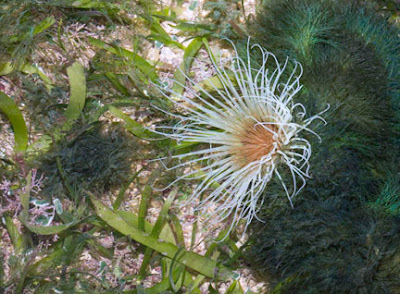 How nice to see this Slender sea pen (Virgularia sp.) at Cyrene. Although commonly seen on our Northern shores, this is my first time seeing it on Cyrene. The water is much clearer here so I managed to take a close up of the polyps that form this colonial animal. 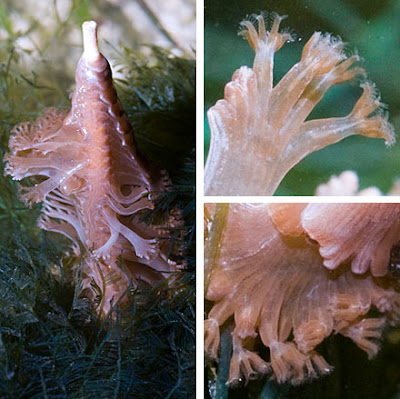 There were some longer Tape seagrass (Enhalus acoroides)growing in the rubbly areas, where there is now a thick bloom of Bryopsis seaweed. I also saw a variety of seaweeds today, with many Caulerpa species. Alas, I couldn't spot any slugs among them. 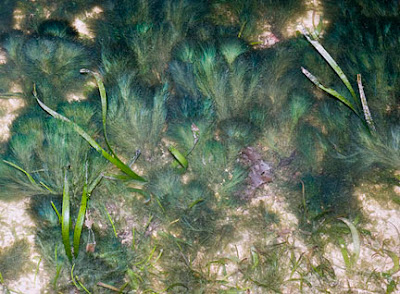 But there are still large areas with cropped Tape seagrasses. 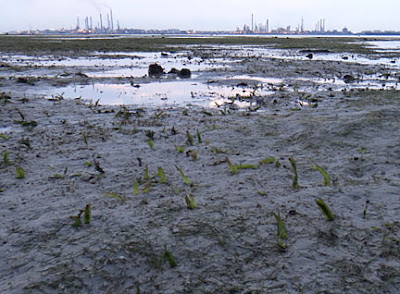 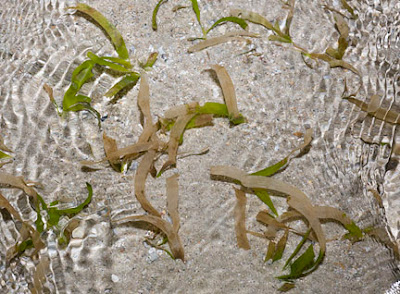 We also noticed that the sandy areas have grown much larger (or perhaps more seagrasses have disappeared, leaving sandy areas without seagrasses). Also, we felt the sand bars seem to be flatter. 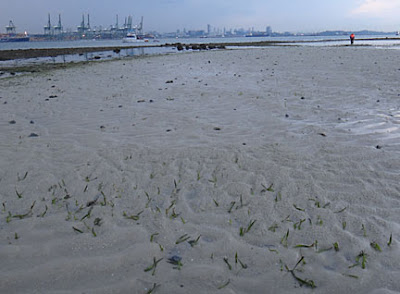 There are still lots of Knobbly sea stars (Protoreaster nodosus) on this shore but they seemed to have moved westward. Perhaps this is because the centre part of Cyrene is becoming much sandier and lacking in seagrasses? None of us saw any baby Knobbly sea stars today. 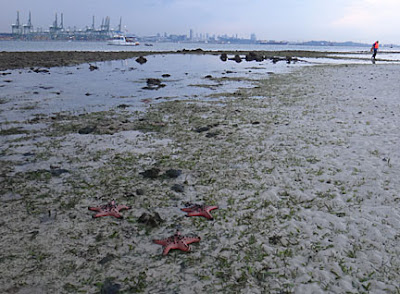 We all said hello to this pretty Pentaceraster sea star (Pentaceraster mammilatus) which seems to be the same one we see on Cyrene and growing slightly bigger everytime we meet. There are still many Common sea stars (Archaster typicus). Though there are still some Cake sand dollars (Arachoides placenta), they seem less plentiful. Mei Lin says perhaps that's why she only saw one Grey bonnet snail (Phalium glaucum) today. 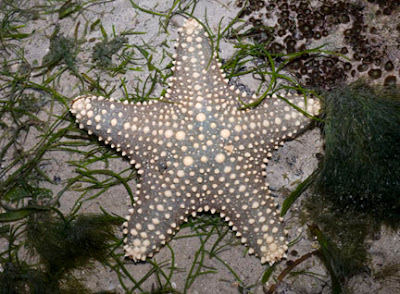 Seems like parts of mangroves do end up on Cyrene! It's unlikely that mangroves can settle here because the reef is well submerged at high tide. 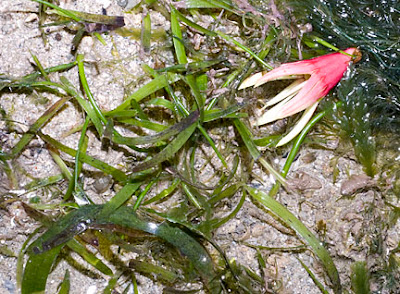 When we got back at Marina at Keppel Bay, we noted that all the usual marine life are still growing on the pontoons. Most of the hard corals seem fine although we saw one dying Cauliflower coral. The soft corals are still plentiful although some are a little pale, none were out and out bleaching. 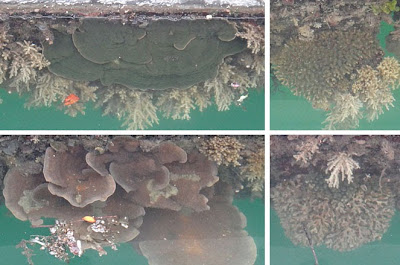 It was a cold and windy predawn trip, but we were spared the big angry red weather that swarmed over Johor and northern Singapore. So it was a surprise to have a lovely pastel sunrise after all! Thanks once again to Alex and the crew of Summit Marine for taking us out at ungodly hours despite their super busy holiday schedule. 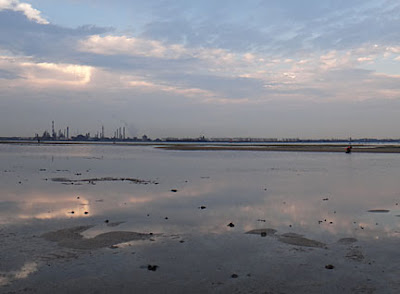 Tomorrow, back out at ungodly hours for another amphibious adventure. What will we find? There's always surprises on Singapore's living shores.