Pulau Ubin is all decked out for National Day when I arrived with the Naked Hermit Crabs for our monthly free guided walk on 3 Aug. 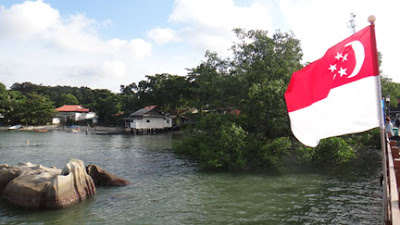 We saw piglets, monkeys, monitor lizard and a cobra too!

We had a lot of students joining us hoping to get a taste of being a nature guide! Thanks to Pei Yan for bringing her students from Katong Convent. We also had students from Raffles Junior College. 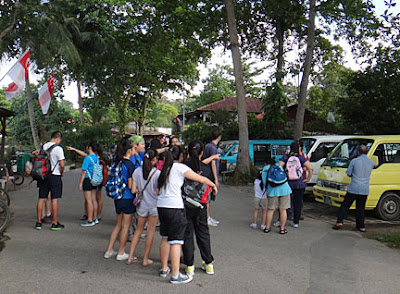 We were greeted by Young mama wild boar and her piglets, all grown up now since I last saw them in June. In Chek Jawa, thousands of people have peaceful interactions with wild boar. If we don't feed the wild animals, they will not bother people. Wild animals that associate people with food handouts will beg and harass people, leading to complaints. Such complaints often means the wild animals pay with their lives. 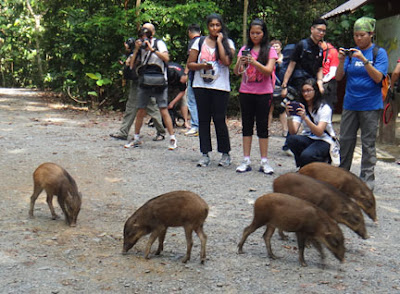 Before we hurried off, one of the young visitors asked to take a group photo of all of us! 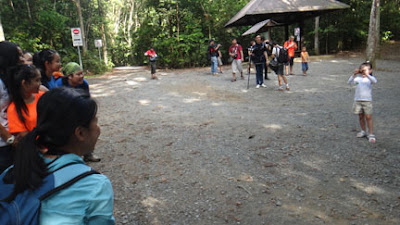 Isabelle took a great shot of everyone! 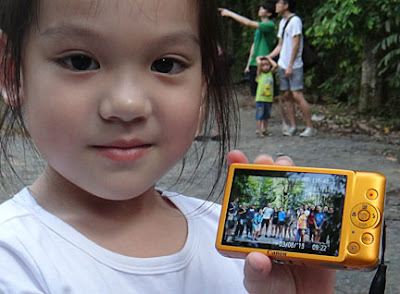 Mama Yokie today sent me the photo that Isabelle took! Thank you for the lovely photo!
We had another great turnout of more than 50 visitors! I'm always so impressed by the many mums and dads who take the trouble to bring their kids to Chek Jawa. Here we are gathering for a group photo by  Mama Crab Ley Kun. Chay Hoon and I started first and soon came across a a peaceful troop of Long-tailed macaques. 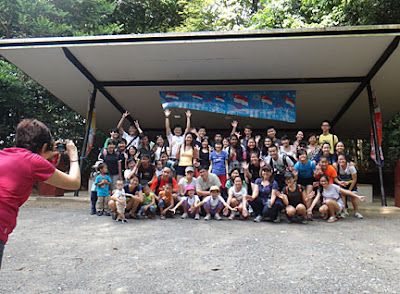 Pei Yan's group waits for my group to get down from the Jejawi Tower before they head up. The Tower can only take a limited number of people at a time! But the view from the top is awesome! In the back mangroves, we looked at colourful little fiddler crabs, tiny mudskippers, a Giant mudskipper, Tree-climbing crabs as well as the Nipah palms which were blooming and fruiting. 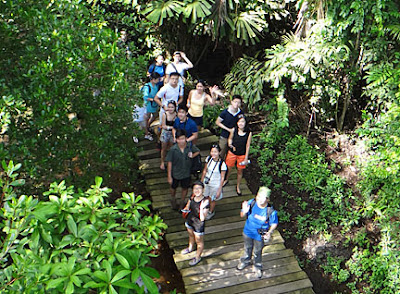 Wow, we spot a huddle of shiny mangrove shield bugs. One of the young visitors has a great camera and took lots of wonderful shots of all our finds. 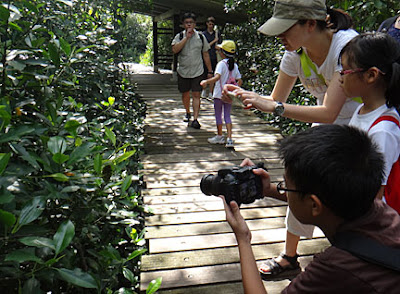 So nicely positioned for everyone to have a look. Today we also saw 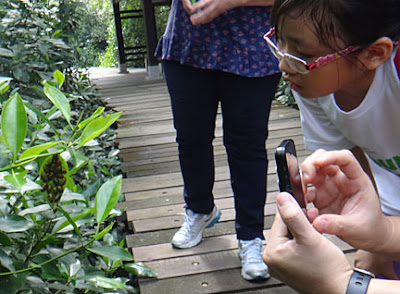 The highlight of the trip was a black shiny snake spotted by Erin, one of the Katong Convent students! Her sharp eyes picked out the snake as it was quietly moving around in the bushes. It darted quickly under the boardwalk and some of us had a glimpse before it disappeared. It looks like a Spitting cobra, which can be dangerous as can accurately spit blinding venom into the eyes. But as we have seen, snakes will not harm us if we leave them alone and don't disturb them. I saw this beautiful snake also at Ubin in Nov 2009. 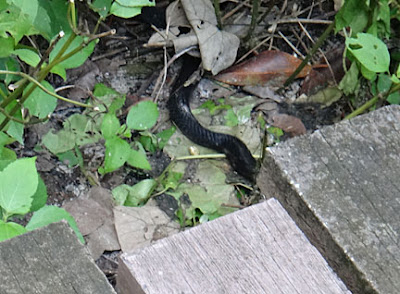 A little further on, we spot a Malayan water monitor lizard with a bright blue tongue. 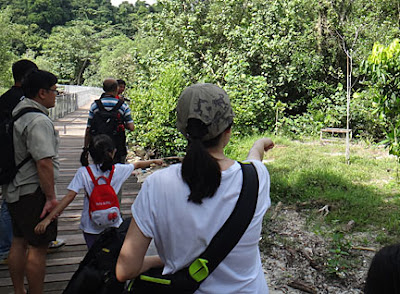 On a sunny day, it's easy to use the shadow of our finger to point out the various animals spotted on the sea shore down below! Like pretty little Gold-spotted mudskippers. There were lots more fiddler crabs when we got out to the seaward side of the mangroves. 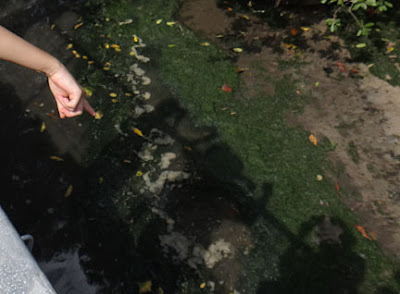 At the end of a nice breezy cloudy walk, we have a rest at House No. 1 overlooking Changi. 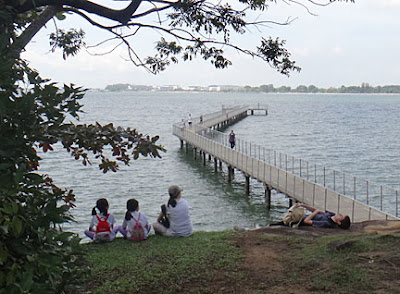 As  usual, all the kids produce awesome drawings of what they saw. 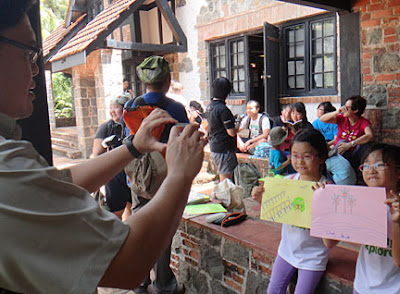 Thank you kids, for finding so many great animals and sharing your beautiful drawings with us. 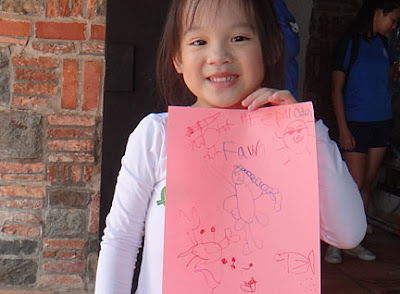 Just as we left Chek Jawa, we saw Mama wild boar, now big and hairy and without any piglets. Her daughters are now the ones producing the babies. 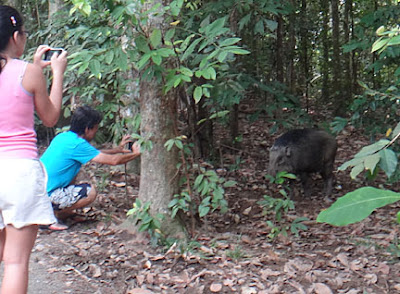 At the end of a long frazzly trip, Ley Kun and Chay Hoon enjoy a wonderful plate of durians shared by Alan Tan. The walks would not be possible without the tireless efforts of the Die Hard Crabs who keep them going while other Crabs scuttle off to do other things. I feel bad missing the last months of walks! 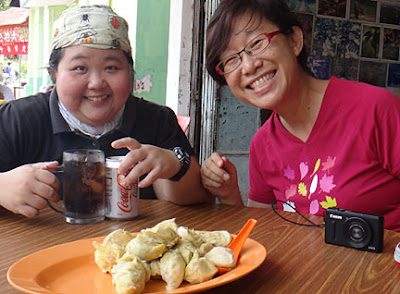 As we headed towards Chek Jawa, we whizzed by the iconic kampung house that had been destroyed when a nearby durian tree fell on it in 2012. The house is still in the process of being rebuilt. It's easy to destroy something, but takes a long time to build it back up. Sigh. 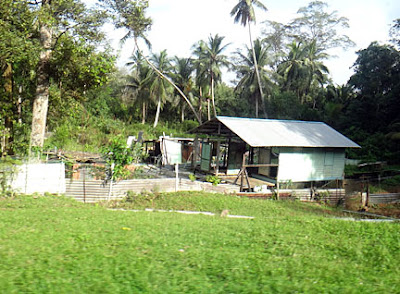 I saw this a humungous barge full of sand passing next to Pulau Sekudu. The barge looks twice the size of the usual barges that we see. 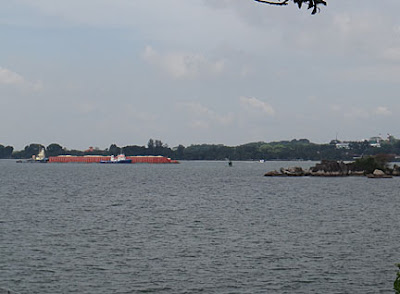 More about Pulau Ubin and Chek Jawa: how to get there and what to see and do. Join the Naked Hermit Crabs on our monthly free guided walk at Chek Jawa more details and online registration.

Pei Yan shares more about this trip on her blog.
Posted by Ria Tan at 12:21 PM