Learning about Australia's marine biodiversity at the first Wallace Lecture 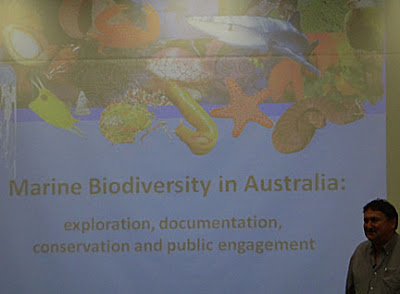 He shared valuable insights into what goes on in a scientific expedition, what taxonomy is about and why it is important, nature outreach and how ordinary people can contribute.


There was a good crowd gathered for the talk! 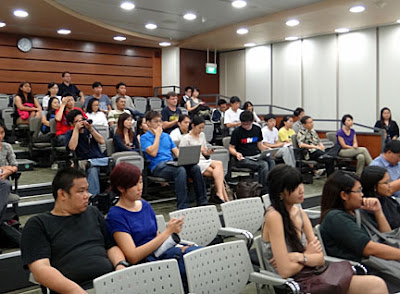 I was seated with Grace Chua of the Straits Times, and Ivan (in blue) who live tweeted the talk #WallacePeterDavie. While Marcus will probably blog soon about the talk. 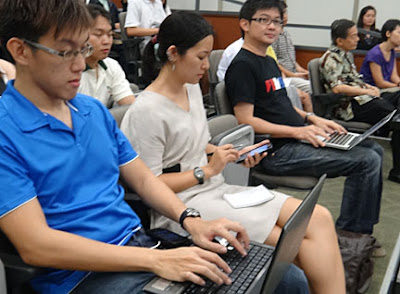 Dr Davie works, among others, on the amazingly rich Queensland shores. 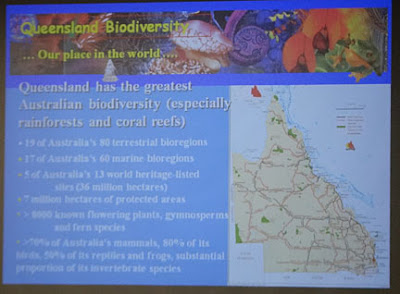 I was particularly fascinated by Dr Davie's story about why it's important to get the taxonomy of even our most familiar sea creatures right. 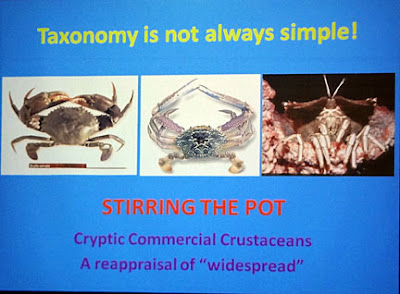 For example, the Mud crabs, which we so love as Chilli crab! They are distributed widely in the world, are all of the same same species? Dr Davie took a closer look. 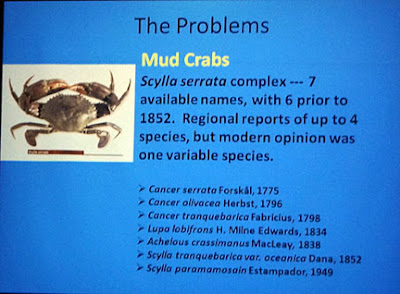 Together with DNA work, he found out that there were four different species that were previously all lumped together. 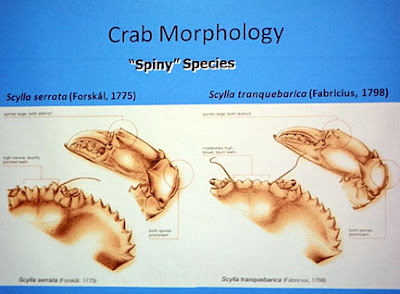 A closer look suggests some ways in which we can tell them apart. 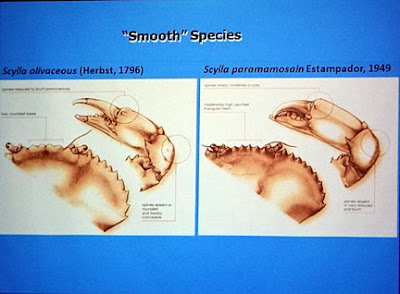 In the living crab, difference are also more visible. Why is it important to know that they are different species? Because each species have slightly different adaptations and behaviour. So if we try to farm these animals and put the 'wrong' kind of crab into the 'wrong' environment, we might not as successful. When trying to conserve and protect animals, it is also important to know exactly what they are. 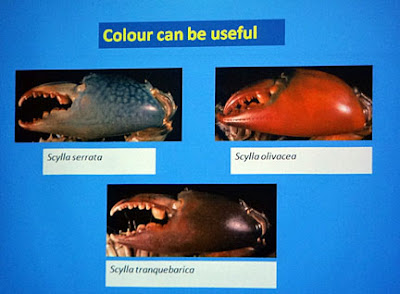 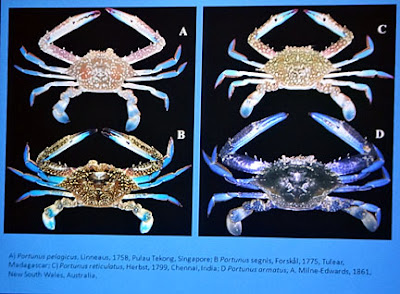 Taxonomic work results in massive and useful work such as this awesome publication by the Raffles Museum of Biodiversity, which is available for free download from the Museum site. 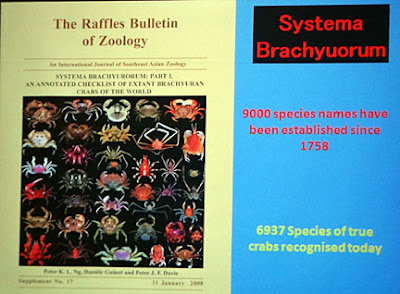 I was particularly taken by Dr Davie's account of scientific expeditions to explore awesome marine habitats like the sea mounts of Australia. 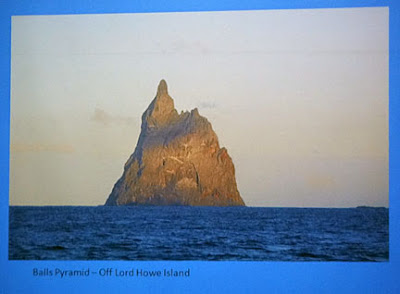 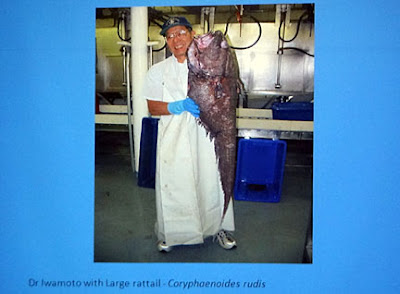 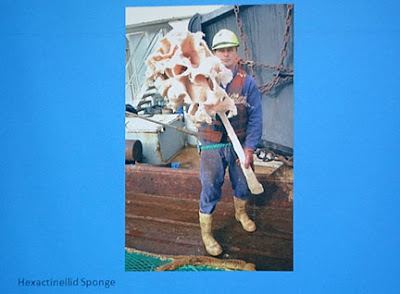 Which was home to all kinds of animals including this special crab. 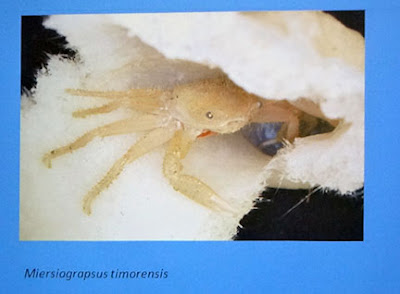 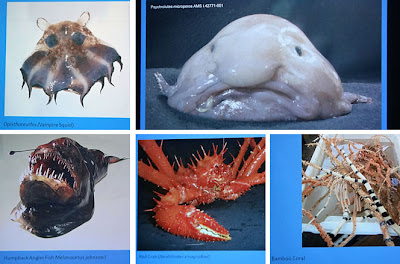 There's lots and lots of work to do in Australia as the surrounding marine area is huge! 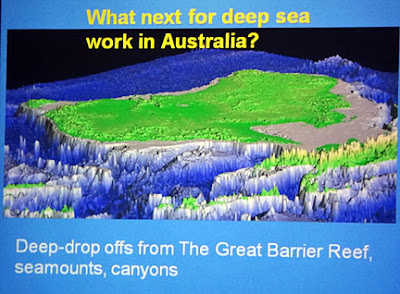 As we have found out from our own dredging effort in Singapore, the hard work is in sorting and processing and identifying what gets dredged up. Here's a look at the truly scary pile of stuff that is being sorted for this expedition! 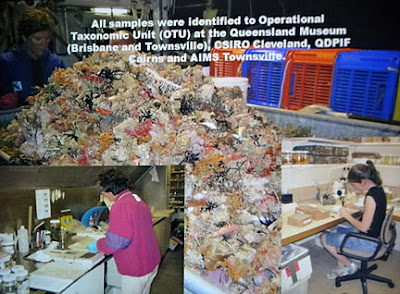 Dr Davie of course spoke about all kinds of other stuff. But another aspect that I found interesting was the effort to engage ordinary people in scientific work. 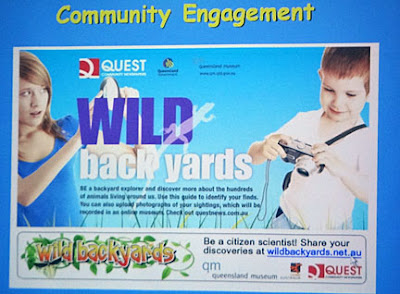 Resources have been set up to allow ordinary people to contribute their own sightings and learn more about the biodiversity in their neighbourhoods. 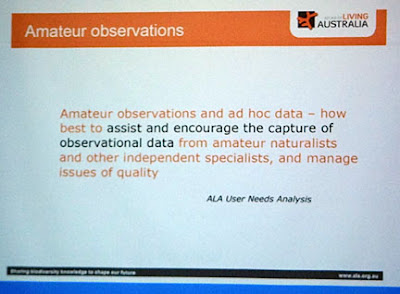 All this work results in online resources that are available to everyone. 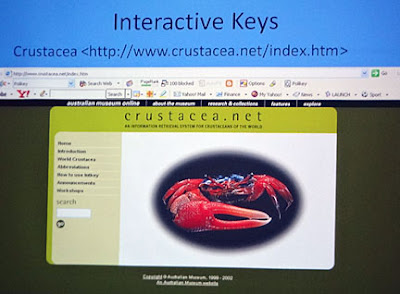 I thoroughly enjoyed the talk and learnt a lot from it. Dr Davie's is the first of the revived Wallace Lecture Series. This was a series of important lectures delivered in the 1960s by well-known biologists in the then University of Malaya. These lectures stimulated discussion and encouraged the exploration of new ideas in systematics, ecology and all aspects of natural heritage. The Series was “resurrected” to further research interest and activity in Singapore’s rich biodiversity.

I'm looking forward to more lectures in this Series!