A spawn of articles on coral spawning in Singapore!


In A Spawning Phenomena in the latest issue of My Green Space, published by NParks, Jeffrey Low and Karenne Tun give a glimpse of what happens during this mysterious event. What forces drive the process? Is it simply a combination of lunar and tidal influence? Or are there other subtle factors involved? Find out more in the article! 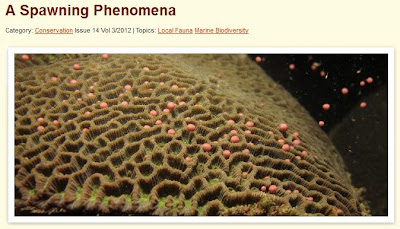 The work of Karenne Tun, who has been studying the coral spawning off Raffles Lighthouse since 2002, was also featured in Alumnus, published by the National University of Singapore. Read the article here or on the Alumnus website. 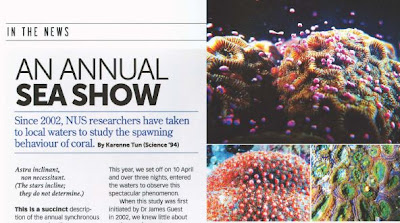 An interesting paper "Reproductive seasonality of the reef building coral Platygyra pini on Singapore’s reefs" has just been published in the Raffles Bulletin of Zoology that shares more about what might trigger these mass spawning activities.

From the abstract: The gametogenic cycle of Platygyra pini was investigated at three sites around Singapore’s southern islands from Mar.2001 to Apr.2002. Equatorial locations, such as Singapore, typically experience moderate annual environmental variation. This has lead to the suggestion that the amplitude of environmental variation at the equator is insufficient to provide reliable cues to synchronise reproduction in marine invertebrates. However, distinct and predictable seasonal patterns of sea surface temperature and rainfall occur in Singapore as a result of the Southeast Asian Monsoon system. Platygyra pini had a seasonal pattern of gametogenesis, with maturation of gametes and spawning occurring predominantly in April. A second, smaller peak in reproductive activity occurred in November suggesting that some colonies also spawn at this time. The major spawning for this species followed a period of rising sea surface temperatures and occurred after the period of heaviest rainfall. While a correlation between environmental fluctuations and spawning timing is not proof of a causal link, these data do indicate that the amplitude of change in environmental parameters such as temperature in Singapore is sufficient to provide a seasonal cue for reproduction and spawning synchrony.