Sekudu with Harlequin and other southern surprises

A wriggly juvenile Harlequin sweetlips! This delightful cartoon-like fish has been sighted on our Southern reefs, but I didn't expect to see one at Pulau Sekudu! 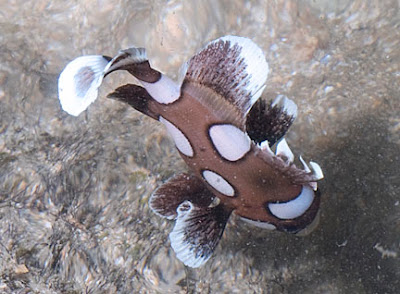 I also saw some other marine life more commonly seen in our Southern shores, as well as lots of other delightful northern creatures.

The Harlequin sweetlips (Plectorhinchus chaetodonoides) swims in a drunken wriggle apparently to mimic poisonous flatworms. As it grows older, it looks and behaves more sedately. Debby of the Hantu Bloggers has an awesome video clip of this wriggly fish seen on Pulau Hantu. Yesterday Marcus saw one at Pulau Semakau, and earlier in the month I had a glimpse of one at Sisters Island.

Another surprising Southern find was a rather large patch of healthy looking Serrated ribbon seagrass (Cymodocea serrulata)! I haven't seen this seagrass in the north before. Not even at Tanah Merah. As far as I know, this seagrass is only common on Cyrene Reef and Pulau Semakau. 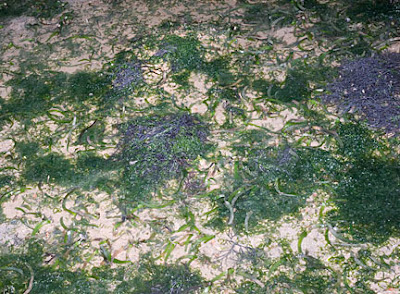 At first I thought it was Sickle seagrass (Thalassia hemprichii) but that has a smooth tip. While these seagrasses definitely have a tip with tiny serrations. 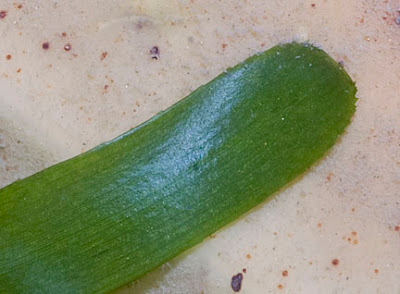 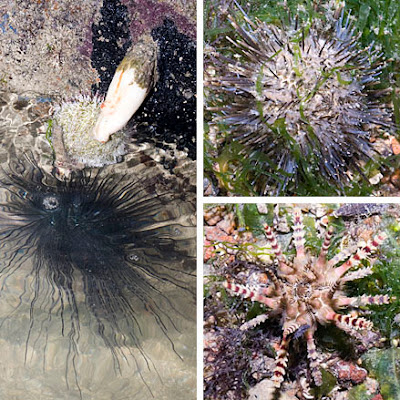 Pulau Sekudu is a great place to spot nudibranchs and slugs. And I was lucky to see a pair of Dendrodoris denisoni that appear to be matings. Nudibranchs are hermaphrodites and each animal has both male and female parts. To mate, they exchange sperm by aligning next to one another, side by side and facing in opposite directions. 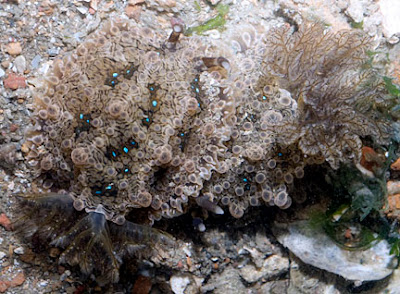 The only other slugs I saw were Ornate leaf slugs (Elysia ornata) which were everywhere, and one Bushy slug (Polybranchia orientalis). But the rest of the team saw lots and lots of slugs! 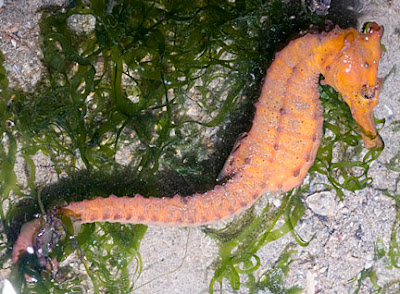 I also came across this fish which I think is a Shrimp-goby (Cryptocentrus sp.). 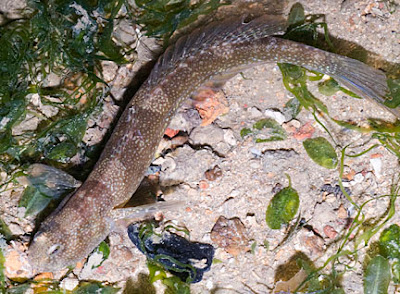 The only special snail I came across was a solitary Miliaris cowrie (Cypraea miliaris). 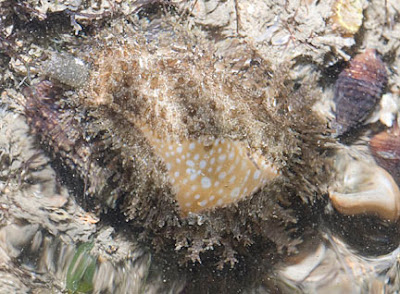 I also saw lots of these little snails all over the seagrasses and seaweeds. I think they are Dotted dove snails (Euplica scripta). 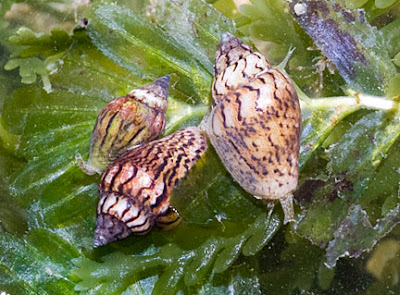 Lots of Posy anemones next to green ones that look different. Both remain unidentified for now! 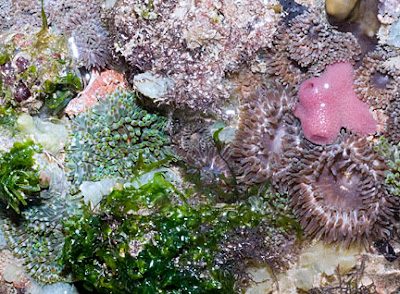 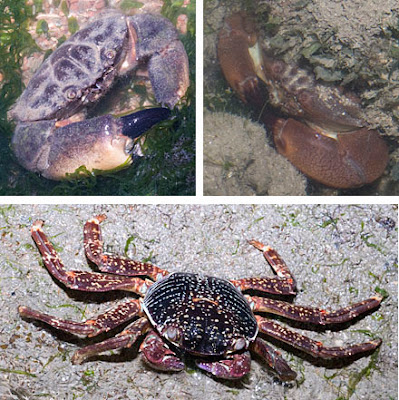 The seagrasses are teeming with all kinds of creatures! From shrimps to fishes, to sea stars! Seagrasses are an important nursery for young animals. When these grow up they may move to other ecosystems like the reefs or open sea. Our favourite seafood are among them! So seagrasses are important if we want to continue to enjoy seafood! 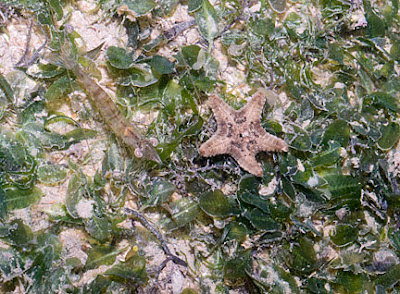 I saw some patches of bleached Spoon seagrasses (Halophila ovalis) and some Fern seagrass (Halophila spinulosa) with blackened and burnt blades. But most of the seagrass meadows looked healthy. Kok Sheng also spotted some Tape seagrass (Enhalus acoroides). There was also a bloom of Sea lettuce seaweed (Ulva sp.) and lots of other seaweeds too. The shores were green and lush!

There were many flowery sea pens (Family Veretillidae) of all shapes colours and patterns on the soft silty seagrassy meadows. These emerged as night fell. 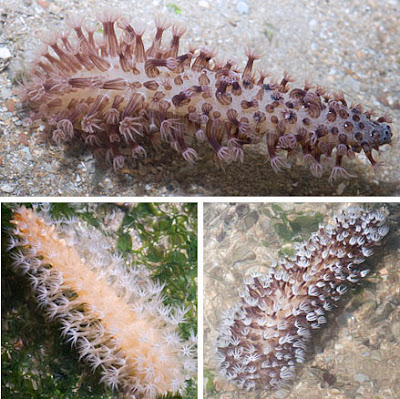 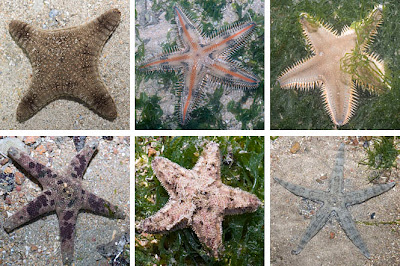 There were lots and lots of these tiny white fan worms with spirally tentacles. Also the Blue fan worm which I usually only see in the north, as well as many Banded fan worms which are common on most of our shores. 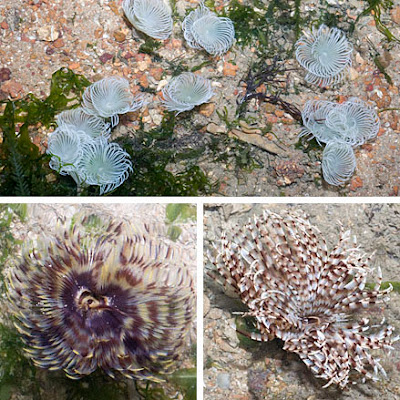 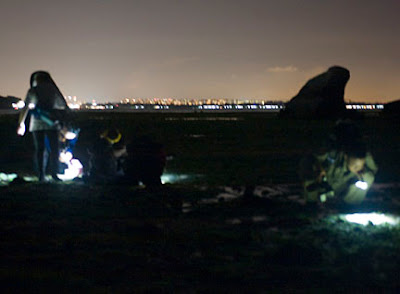 Pulau Sekudu means 'Frog Island' and indeed, there is a large rock on the island in the shape of a crouching frog! We visit this island once or twice a year, to check up on it! Compared to last year, some parts of Pulau Sekudu seems to have gotten sandier. 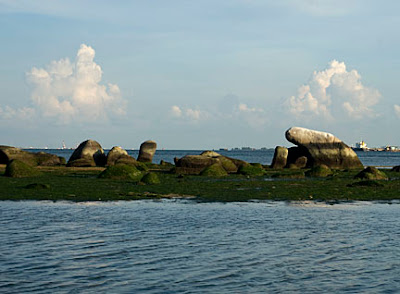 Pulau Sekudu has quite a large intertidal area, and it lies just off Chek Jawa. The tide didn't go as low as predicted so we couldn't really explore the outer reefier edges of this little island.

We seldom visit this pretty island nowadays as it is off limits since 2007 and requires special permission from NParks. We were visiting with NParks permission to do a quick survey and to clean up the island. We kept a look out for abandoned driftnets and fish traps on the island. We're very glad to find none!

Thanks to Alan at NParks for permission to visit and to Chay Hoon for organising the trip!