Large piles of plastic litter have appeared on Tanah Merah. 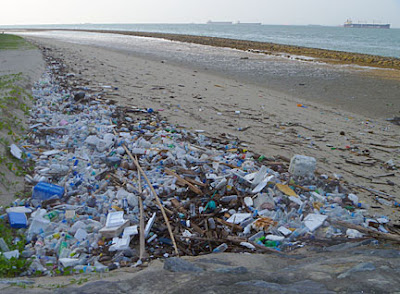 Today, I did my monthly visit to these shores that were hit by an oil spill a little more than a year ago. Alas, oil spills are not the only pollution that can drift up on a shore.

I visited after sunrise on a not so low tide. So I didn't see as many fishes and crabs as I did on my night trip in June. I did see two large Spotted moon crabs (Ashtoret lunaris), and lots of little Flower crabs (Portunus pelagicus). 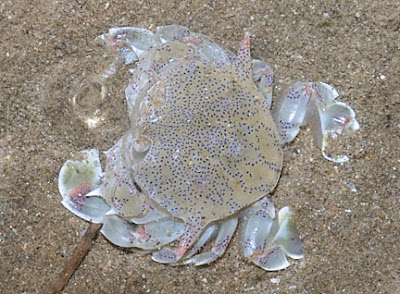 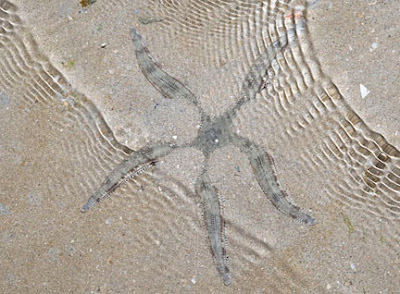 There were several young  Window-pane clam (Placuna sp.) on the rockier parts of the shore. 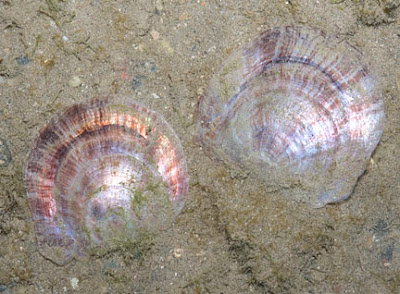 Other living bivalves seen included a few Fan clams (Family Pinnidae) and on the seawall, a large oyster (Family Ostreidae).

The big leathery soft coral (Family Alcyoniidae) that I visit every month seems fine. It was windy today, which kept the sandflies away but made it difficult to photograph submerged animals. And the ground is still soft and silty near the seawall, resulting in murky water with every step. 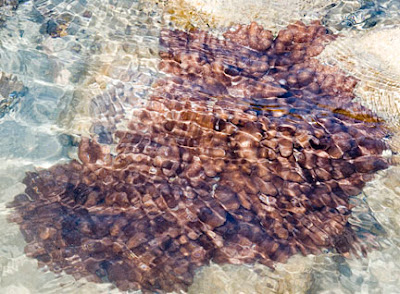 As usual, there were still many colonies of Favid corals (Family Faviidae) small and large. 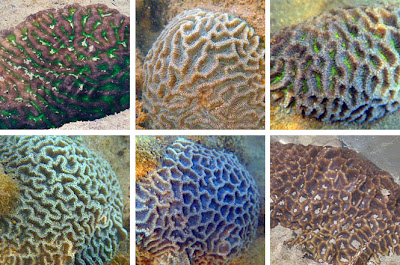 There were still many Pore corals (Porites sp.). Most of them seem alright.

There were many tiny to small colonies of Flowery disk coral (Turbinaria sp.). 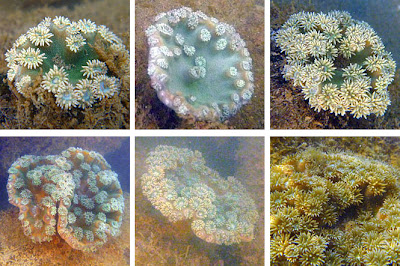 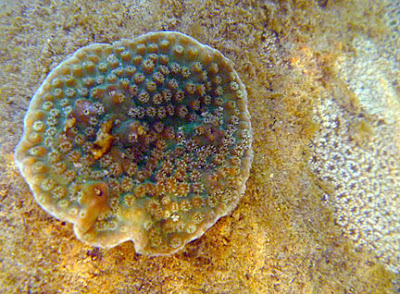 Oh dear, the single Acropora coral (Acropora sp.) that I've been seeing seems to be dying off at the tips. 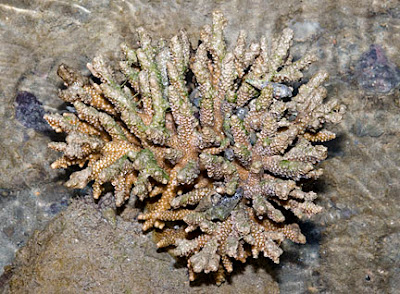 A closer look at the tips of the colony which are already dead and covered with brown scum and algae. 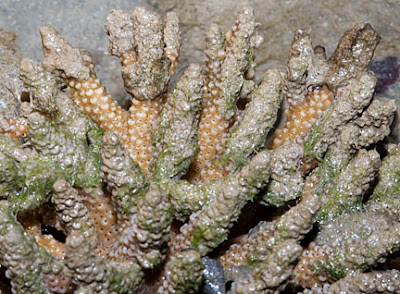 Some of the coral colonies had patches of scummy stuff on them.

I saw several large patches of Button zoanthids or colonial anemones (Zoanthus sp.). But I didn't manage to see any sea anemones or other kinds of cnidarians. 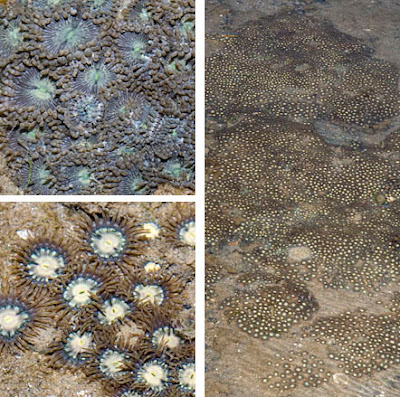 Blue spatula sponge (Lamellodysidea herbacea) were still the most common on the shore, with lots of whitish ones on the seawall.

There were some of these pinkish patches. Possibly ascidians or a sponge? 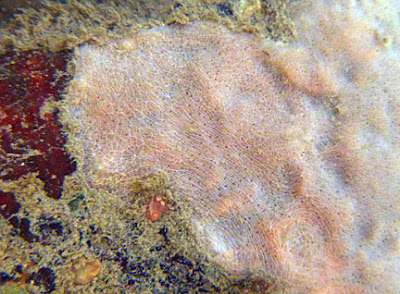 How nice to see some fresh growth of Spoon seagrass (Halophila ovalis). I saw several small patches of these seagrasses, and one small clump of Tape seagrass (Enhalus acoroides). 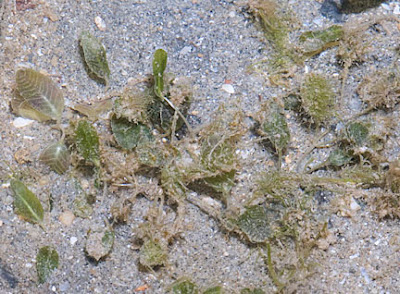 There were many small clumps of Knobbly red seaweeds (Gracilaria salicornia) on the rockier part of the shore. There were also some Sargassum seaweed (Sargassum sp.) and Mermaid's fan (Padina sp.). Some parts of the rockier portions of the shore was 'crunchy' with a coating of tiny pink pom pom seaweed. There was a sprinkling of other kinds of seaweeds. 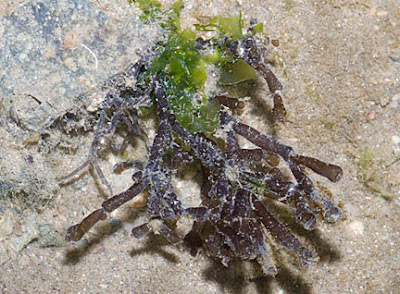 Some parts of the shore was still covered in a brown scum on the sand surface. 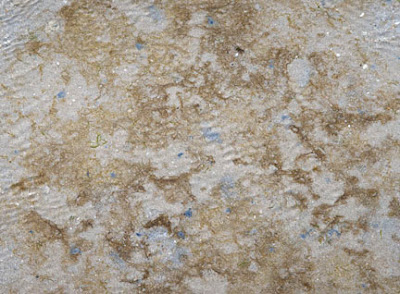 While I didn't see much signs of crude oil on the sandy shore, there was lots of litter dispersed all over the shore, and accumulating on the high shore. Among the floating litter, I also saw many floating mangrove seedlings. 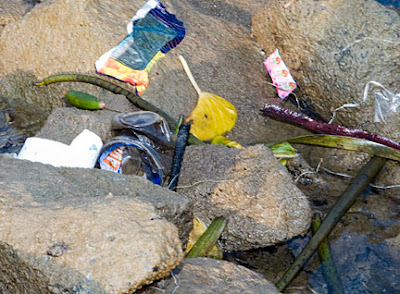 I took a closer look at the litter. Many were snack packets and food packaging (e.g., bread, oil) as well as lots of used toiletries such as toothpaste, lotions, shampoo. Most of them had foreign text, probably Malaysian and/or Indonesian.
I did notice plastic litter piling up here last month. Today, the piles look bigger. On the horizon, a ferry passes by towards the ferry terminal. Was the litter tossed off by passing boats? Or did the rubbish drift in together with the mangrove propagules from somewhere else? 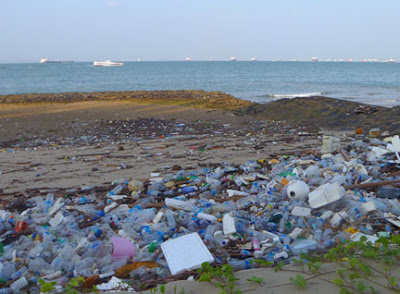 Very close to the shore, large colourful buildings seem close to completion. There is no signage at the front of the site so I'm not sure what these buildings are for. 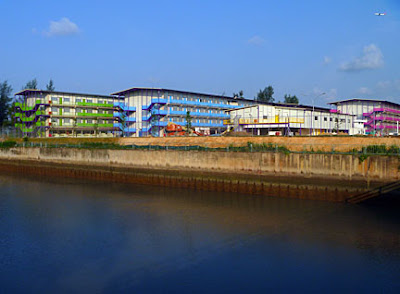 More about the oil spill on this blog and on the Oil spill facebook page.
Posted by Ria Tan at 6:47 PM