Large star and stargazer at Changi

An adult, full-sized Knobbly sea star! It's the first time I've seen one on Changi! Jerome Pang found it just as we started our trip. Which turned out to be quite adventuresome with lots of other interesting observations too.

Changi is particularly rich in echinoderms. There are so many kinds that we can often get a photo of several in one shot. Here is a White sea urchin (Salmacis sp.) which has a habit of carrying stuff. And a Thorny sea cucumber (Colochirus quadrangularis) which clings on to stuff. And thus the sea urchin ended up carrying a sea cucumber! 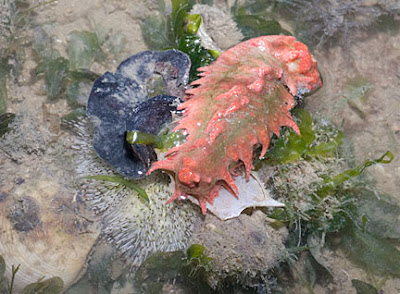 A little later, we found a small Knobbly sea star (Protoreaster nodosus). This looked different from the two small ones we saw here in May. 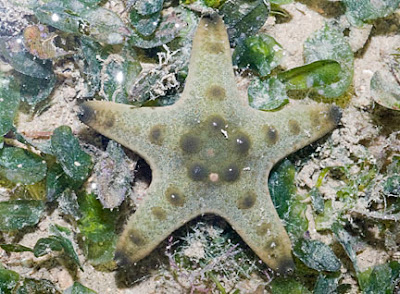 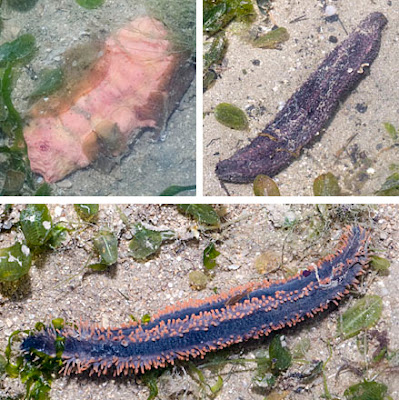 We even came across a small feather star (Class Crinoidea), another echinoderm. 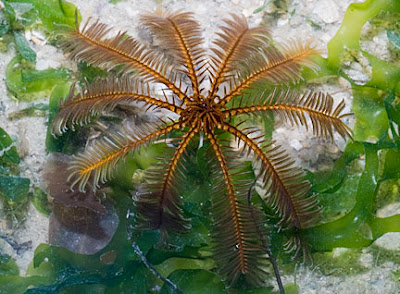 There were many Cake sand dollars (Arachnoides placenta) distributed over many parts of the shore. I only came across one large living Pink sand dollar (Peronella lesueuri). I saw a dead one and took the opportunity to photograph the underside. The mouth opening is in the center, while the anus is on the edge of the shell. 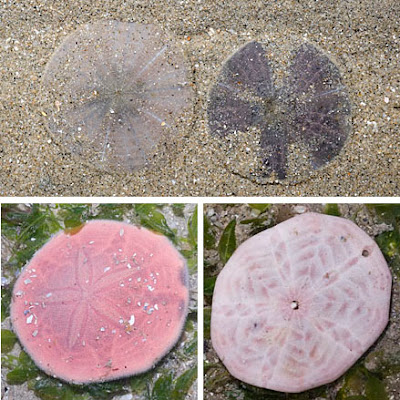 Here's a strange moon snail that I don't know. It was dead and hermit crabs were starting to eat the flesh.

I saw one live Olive snail (Family Olividae), another commonly encountered snail in the clean sand on this beach. Other snails seen included one large and one small Noble volute (Cymbiola nobilis). There were also many small to large Window pane shells (Placuna sp.), also many Fan clams (Family Pinnidae). I saw many more Hammer oyster (Malleus sp.) than I saw on our last trip in May.

What is this mess? The shell is definitely that of a moon snail, but that's a very large siphon. Aha! It's a moon snail that is trying to eat a clam. The siphon belongs to the clam!

As I was looking at this morbid scene, suddenly, the clam made vigorous efforts to get away. Using its long slender foot, it made desperate and quick leaps and escaped the clutches of the moon snail. 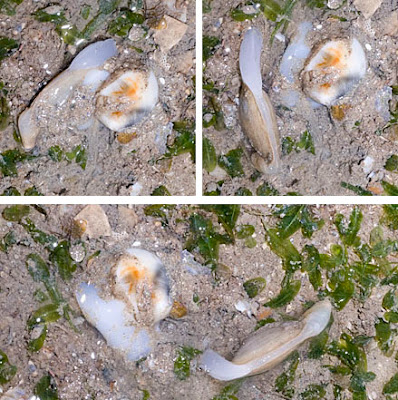 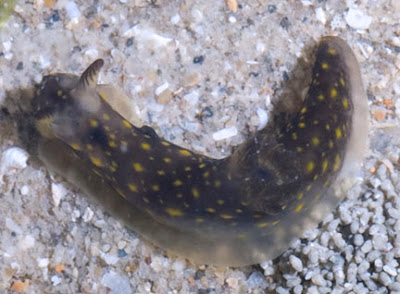 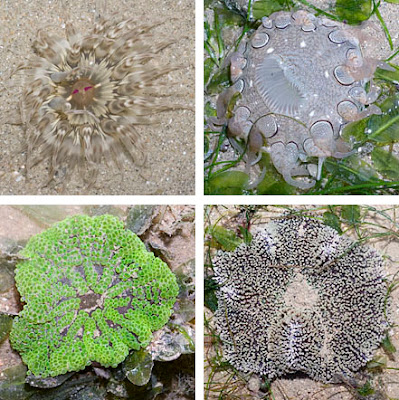 There were many large Swimming anemones (Boloceroides mcmurrichi) and several smaller ones. This one seems to have just started growing two rounds of tentacles and has yet to become the mop of tentacles that adults are. Buried in the sand were a few Peachia anemone (Peachia sp.), all with white body columns. 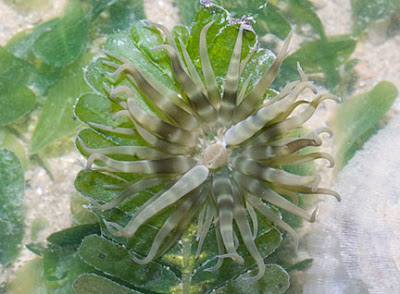 There were very many sea pencils and I saw one flowery sea pen (Family Veretillidae). But I saw only a few cerianthids (Order Ceriantharia).

The seagrass meadows were generally lush today. Needle seagrass (Halodule sp.) seemed to me to be more abundant everywhere. There were large patches of Fern seagrasses (Halophila spinulosa) and also lots of Spoon seagrasses (Halophila ovalis). Today, I didn't see any more Tumu berau (Bruguiera sexangula) propagules washed up on the shore as I did in Jun. It looks like the season for it is over.

As we headed out with the tide, Jerome Yong found a driftnet. Yes, today we have two Jeromes on the trip! And also Dr Chris Klok from IMARES who made special arrangements to see our Changi shore. Where the net was laid, we noticed furrows in the seagrasses that might have been made by dugongs. Dugongs are air-breathing mammals and will drown if they are trapped underwater in a net. 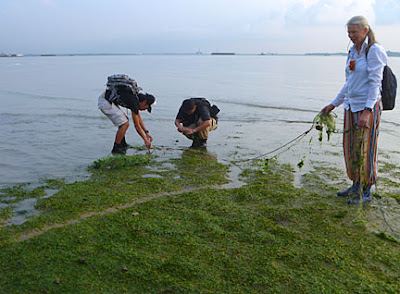 Everyone pitched in to release the fishes trapped in the net. More about the net in this separate post. One of the fishes released was a large Stargazer (Family Uranoscopidae). We have seen this fish before on Changi in 2005. I have read that this fish has a protrusible mouth, i.e., it can extend its mouth outwards. This is the first time I actually saw this in action! 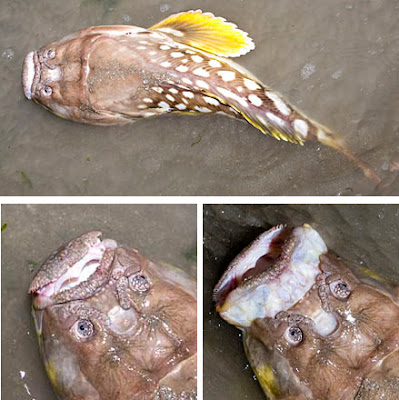 After it was released, the large fish made a few vigorous wiggles in the wet sand and within seconds, it was buried with only its upward facing eyes peeking out of the sand, staring up at the stars. In the murky water, unsuspecting prey that they wander to close to this hidden monster will be gulped down by the upturned protrusible mouth. 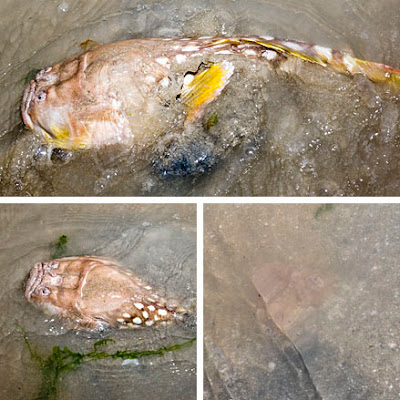 Changi is an amazingly rich shore. Hopefully, it can remain this way for everyone to appreciate.

Thanks to Dr Chris for coming to take a look at Changi! And thank you also for the kilo-inducing cookies which I will no doubt polish off all too quickly.

It appears I have one more trip tomorrow. To squeeze a look at the other end of Tanah Merah which was affected by the oil spill. Not enough low tides to check up on all our shores!