We are back on Pulau Jong early in the morning for a very long low spring tide! My last trip here was in August 2010 when there was extensive coral bleaching going on at Pulau Jong.
Alas, it seemed rather quiet today on Jong. Although coral bleaching seems to be over, I didn't see as many hard and soft corals as before.

We arrived at dawn in a drizzle. Thanks to Alex and Jumari, we made safe landing on this submerged reef that is surrounded by strong currents. 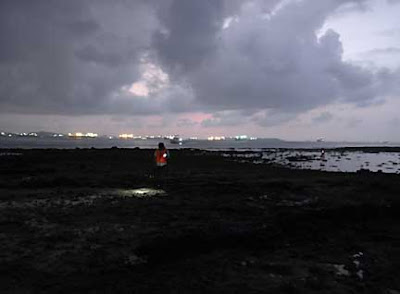 I soon got started checking on the coral bleaching situation on the shore. The most common hard corals here were boulder-shaped Pore corals (Porites sp.). Most of them including the large one were the normal brown colour. Some were purplish-pinkish, and many small ones had bite marks of fishes on them.

I saw many Pebble coral (Astreopora sp.), most of which looked alright although some had discoloured portions. I also saw one plate Montipora coral (Montipora sp.). I saw one Tongue mushroom corals (Herpolitha sp.). 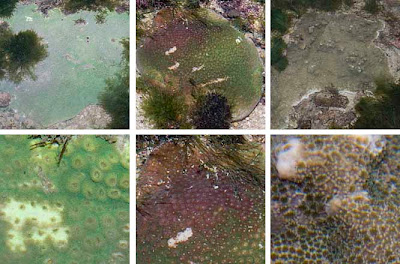 I didn't see many colonies of Favid corals (Family Faviidae), but those I saw seemed alright. 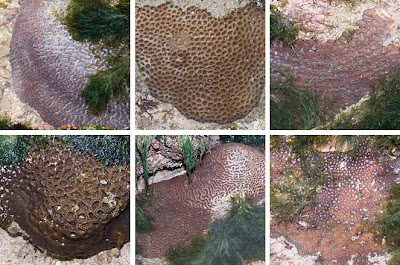 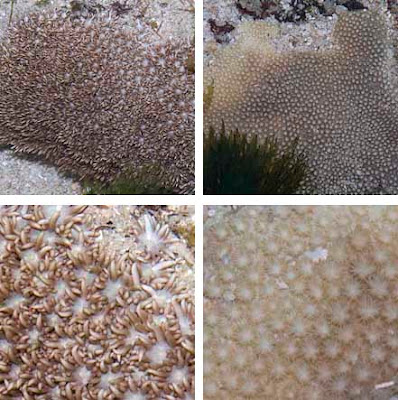 I saw one large Cauliflower coral (Pocillopora sp.) and one large Sandpaper coral (Psammocora sp.) colony that seemed alright. These two kinds of corals were badly affected during the bleaching event. 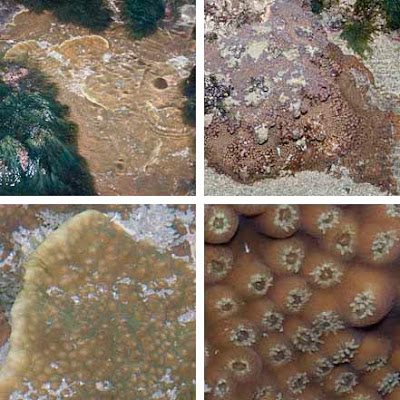 The special coral find of the day were clusters of Cave corals (Tubastrea sp.) hidden under the very large boulders on the shore. 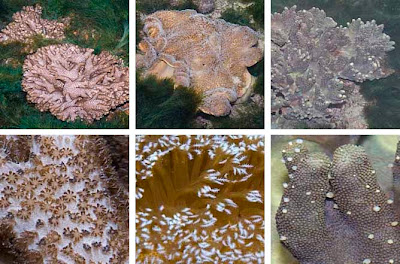 My sense is that while coral bleaching is over on Pulau Jong, many of the hard and soft corals didn't survive the event. More about coral bleaching on the Bleach Watch Singapore blog.

Marcus finds the strange anemone that I saw on my earlier trip in May 2010. At that time, it seemed to be bleaching. It's good to see that it is still here and is no longer bleaching. We are wondering if this is Merten's anemone (Stichodactyla mertensii). 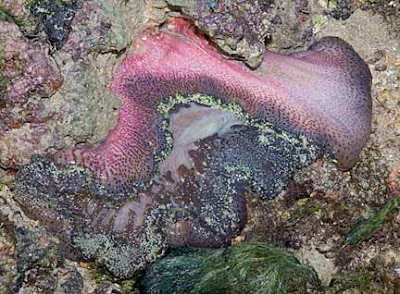 The Merten's anemone has shorter tentacles than the Giant carpet anemone (Stichodactyla gigantea) and has brightly coloured bumps (verrucae) on a pale body column. Hmm...

There are some Giant carpet anemones here. I saw one with several 'Nemos' or False clown anemonefishes (Amphiprion ocellaris). But they were very shy and remained well hidden in their anemone home. I only managed this shot of a glimpse of one of them. 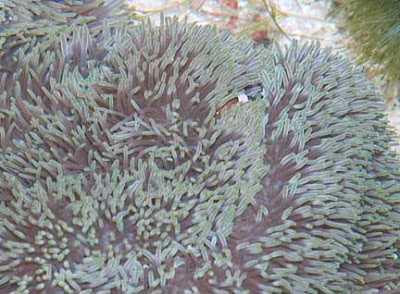 There were some Frilly sea anemones (Phymanthus sp.) of various kinds. None of those I saw were bleaching. 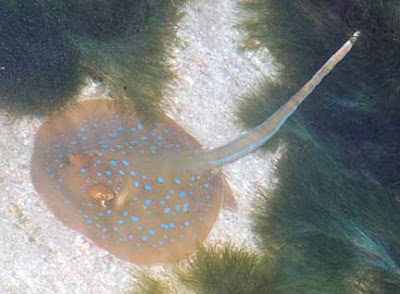 I only saw one Long black sea cucumbers (Holothuria leucospilota) today. But Chay Hoon found lots of the tiny seven-armed sea stars which we have yet to identify.

There were many fishes zooming around in the water. I only manged to shoot the slow ones like these filefishes (Family Monacanthidae).

I'm useless at spotting nudibranchs and only see the really obvious ones like the Jorunna funebris and Phyllidiella nigra. Chay Hoon found some really tiny nudibranchs!

There are some patches of Sickle seagrass (Thalassia hemprichii) and Spoon seagrass (Halophila ovalis) on Pulau Jong. 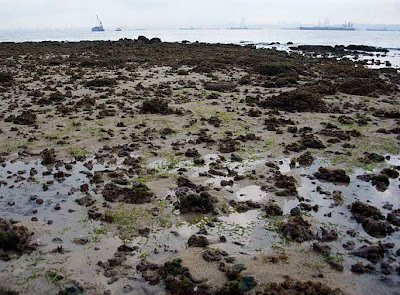 The shores were thickly carpeted in Hairy green seaweed (Bryopsis sp.). Also abundant were Veined brown seaweeds (Dictyopteris sp.). There were also some red seaweeds of various kinds. I only saw lots of Sargassum seaweeds (Sargassum sp.) on the shore facing Pulau Bukom. 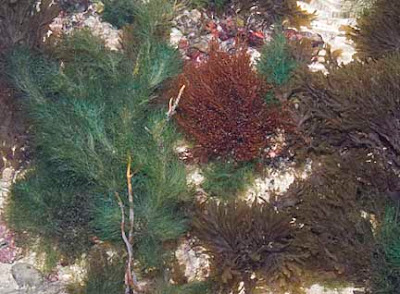 Since the tide was low for a long time, I had a quick look around the 'char siew pau' that is the coastal forest on this shore. It's huge! Russel is tiny next to it. 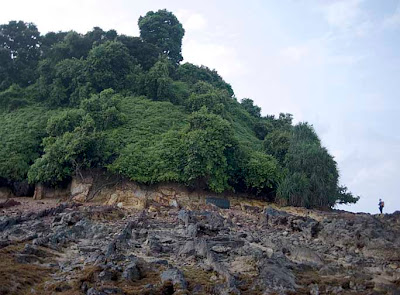 Many parts of the coastal forest comprised swathes of what looks like Resam, a kind of fern. Perhaps the result of a landslide? 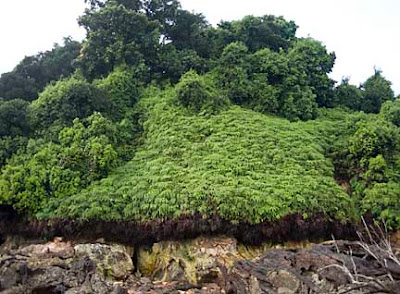 There were many many Delek air (Memecylon edule) trees of in the forest. They were all fruiting massively. I imagine it must be gorgeous when they were in bloom! 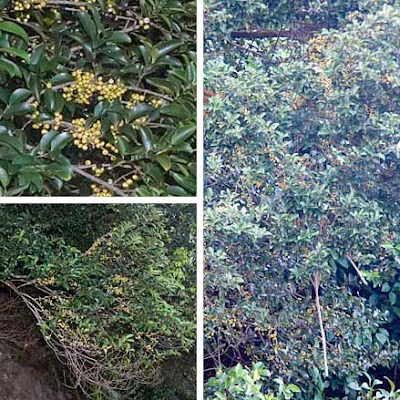 There were also several of these pretty plants that were in full bloom. I'm not sure what they are. Joseph Lai came with us a while back and has shared a list of plants found on Pulau Jong.
There was large tree with fluffy white flowers. Probably some kind of Syzygium?
Oh dear! The large Fluted giant clam (Tridacna squamosa) near the high shore is dead! We all didn't visit the other giant clam here, I hope it's still alright. I'm sure Mei Lin will be disappointed to hear this. The stake next to the clam shows this is one of those she has marked in her study of these magnificent beasts on our shores. Sigh. 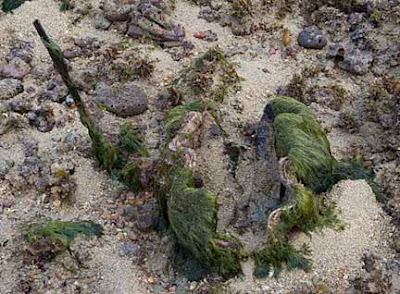 Russel found five large fish traps on the high shore. This looks like the same traps that Moira and her kayaking friends saw when they visited this shore recently. At that time, they 'disabled' the traps by cutting holes in the traps. Three of the traps had holes. We cut holes in the remaining two. 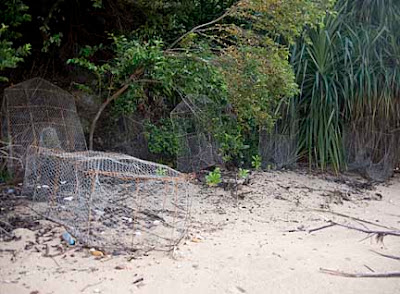 A little further on, another two large traps on the very high shore. Suggesting the people who left these traps here only come at high tide. We disabled these traps as well. It seems this shore might be subjected to some degree of harvesting. 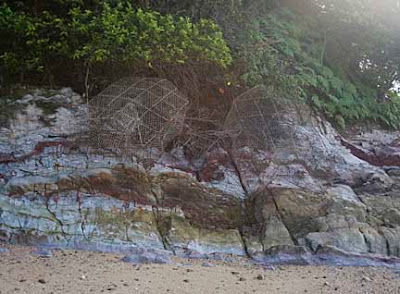 As I surveyed the shore, I came across about 20 pieces of large corals that have been recently overturned. The corals on the underside were still alive when I turned them back. The pieces were spaced apart from one another so this doesn't seem to be the result of a boat strike. Did the currents turn them over? Did someone turn them over? On Cyrene, I noticed that people used corals to wedge fish traps on the shore. Perhaps this is what happened on Jong as well? 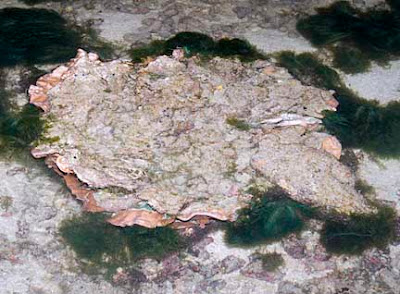 The living reefs of Pulau Jong lies just next to Pulau Sebarok which has many tanks storing petroleum products.There are also plans to locate massive floating oil storage tanks here. These tanks will be the size of VLCCs (Very Large Crude Carriers). 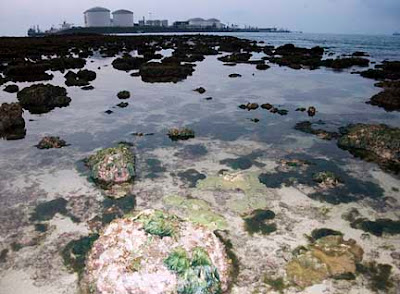 Pulau Jong is among the last few islands that have not been affected by reclamation. Let's hope it can survive the many pressures that it is and will face. More photos of marine life on Pulau Jong on wildsingapore flickr.

Fortunately, the weather improved during our trip. It was a lovely blue-sky day as we left with the incoming tide. Marcus spots a bird flying into the coastal forest. 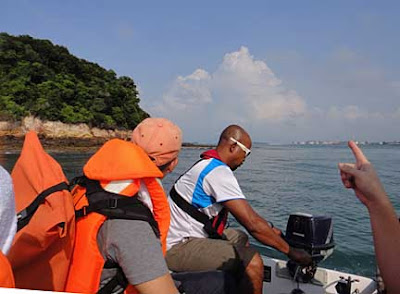 Back on the mainland at Marina at Keppel Bay, we notice that marine life has also returned to the pontoons in the Marina! Hard and soft corals formed an underwater garden. There were also lots of fishes of all kinds and sizes. During the coral bleaching episode, these pontoons were almost bare! 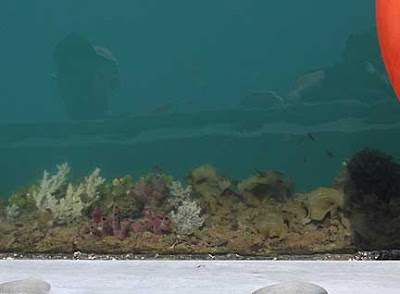 Over the next few days, we will be checking our more of our submerged reefs.