"In countries where marine areas are not protected, the role of individuals becomes of greater importance in promoting awareness regarding marine habitats that should be protected". 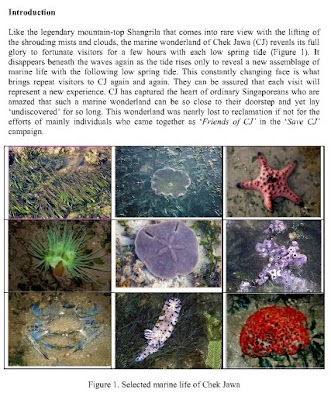 This and other key findings are highlighted by Prof Teh Tiong Sa and Dr K. Raju in a paper that documents the role of committed individuals and events that brought about the conservation of Chek Jawa.

"The about-turn by the Singapore government to defer the proposed land reclamation was proclaimed as the first time in its history that public opinion and field data provided by the public had helped to bring about a change in policy. This data was not provided by renowned marine scientists or academics but was collected by a group of individuals and students committed to preserving nature, and presented to the government without recommendations to help it make a decision."

The paper gives lots of details and insights the events and actions leading to the deferment of reclamation at Chek Jawa. These efforts include the mapping and ecological studies "carried out by individuals in their own capacity although many of them were members of nature groups or research institutions." And the development of a GIS Database for Chek Jawa which "has no single ownership; it belongs to all." 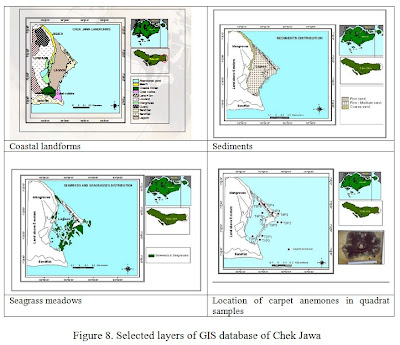 There is also lots of details on the study on the impact of visitor trampling on carpet anemones, led by Joseph Lai. In the study's report submitted in 2002, Joseph Lai included a proposal to create a marine park at Chek Jawa. He wrote that "For some, Chek Jawa is a giant touch pool, a playground, and a poet’s corner. For others, Chek Jawa is a natural wonder with huge potential for education and research. It is a pity that such a wonder of nature may soon be lost. If there is any way in which Chek Jawa can be conserved for the enjoyment of future generations of Singaporeans, then every attempt should be made to explore this possibility. We may be judged harshly by future generations of Singaporeans if we fail to do so."

The proposal suggests that Chek Jawa be protected and gazetted as a Marine Park under the stewardship of the NParks, for recreation, education, conservation and research. This will be a first for Singapore to have a conservation area designated as Marine Park - a very natural feature for an island nation.

I learnt some astonishing facts from the paper. Such as:

"Although there are five designated marine parks totaling 500ha, managed by the Agri-food and Veterinanry Authority in Singapore, these parks are for rearing commercial fish (Ministry of Environment, Singapore 2000)"

The paper also highlights some thought-provoking ideas. Such as:

"Sometimes individuals can achieve what organizations cannot, because of their freedom on act on their own and their willingness to take responsibility for their actions. Organizations on the other hand are constrained by group agenda and responsibilities."

"Although it is obvious that to manage an area or a particular resource well we must know the area and the resources found within it, it is surprising that too often attempts at management are carried out with insufficient knowledge. At times, there is little baseline or longitudinal data to guide how an area should be protected. Usually, the authority entrusted with managing the area does not have a research arm, capacity, or funds to do the research to understand the ecological processes operating. It may also focus more on management and not on scientific issues. How then can such a problem be addressed?"

"Independent research may not be welcomed in a protected area because it may not fit in with the agenda of the approving authority. On the other hand scientists may not want to conduct research in such areas because of the often long delay in getting approval and the conditions imposed on them. In-house research would be ideal as objectives would be more targeted towards the needs of the authority. Where funds are available, consultants can be commissioned to carry out the research. Findings from in-house and commissioned research for obvious reasons usually influence decision making and have a better chance of being translated into policies."

"Role of individual in promoting awareness: Useful data may be collected by the public who may set up their websites to report on their observations and post photographs, some of which may have a GPS position. Local residents have historical data and divers provide continual observations. School groups may also be a useful source of information. Authorities can help pool the data to be shared by all. The inclusive approach in tapping knowledge from the public helps build up local knowledge."

The paper also explores the question "Why was Chek Jawa ‘undiscovered’?" and "Why the deferment?"

"Some considered the decision as all about timing and that if it had happened 10 years earlier, the result would have been different, as the conservationists would have fought a lonely battle, their voices lost in a wilderness of booming economic growth, without public support and against an unsympathetic government. In an era of public awareness about state of earth’s health and the impacts of global climate change, attitudes from both sides had changed."

It is indeed an inspiring and enlightening paper!

Prof Teh remains a great supporter of those working to learn more about and protect our shores. A leading expert of the shores in our regions, he has been generous of his wisdom and inspiring in his encouragement. I personally feel that much of what has been achieved for Chek Jawa would not have been possible without Prof Teh's guidance and influence. Beyond Chek Jawa, Prof continues to support other on-going efforts such as the Semakau Survey in Jun 2005, below, with Hui Boon (in pink cap), another long-time 'Friend of CJ'. 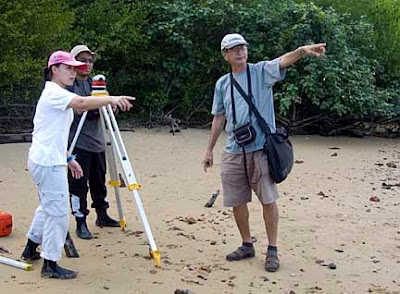 In fact, the Semakau Survey was inspired by and conducted in the same spirit as Joseph Lai's first Chek Jawa survey before deferment, and carried out by volunteers from all walks of life. These ad hoc annual surveys eventually evolved into the more permanent and regular TeamSeagrass surveys that now include regular monitoring of Chek Jawa.

Dr. D. Kumaran Raju is also a great 'Friend of CJ' having been involved in many aspects of work for Chek Jawa before and after deferment of reclamation. And he continues to generously share his time and expertise to map many of our shores. Providing his GIS maps online for everyone. Among these shores, Dr Raju has helped to map Cyrene Reef, together with Prof Teh as well. I'm very glad the paper features Joseph Lai's tireless work! Joe played a key role in leading the 'Friends of CJ' group and the work done for Chek Jawa both before and after deferment of reclamation. Here's Joe and the reunion of 'Friends of CJ' for the Dugong Ambassadors event that Joe organised at Chek Jawa in May 2008. As always, Joe is very deeply concerned about the children and their connections with nature.

Reading the paper brought back many memories and reminds me much of why I do what I do today. There are many many others who were touched by the events and efforts at Chek Jawa. Long after the event, I still learn new things about the continuing influence of the Chek Jawa experience. Truly magical.

Yes, you CAN make a difference! Here's more.

Read and download the paper from slideshare, generously provided by Prof Teh and Dr Raju. Thank you!

"Conserving marine biodiversity and the role of individuals: A case study of Chek Jawa, Pulau Ubin, Singapore" by Teh Tiong Sa and K. Raju was presented at the Seminar on ‘Growth, Equity and Environment: Missing Link between Academic Research and Policy Matters in Marine Park Areas’ 15th April 2010, FEA, UM, Kuala Lumpur.
Posted by Ria Tan at 5:53 PM