Rain is not the only problem that makes taking photos of our marinelife difficult. 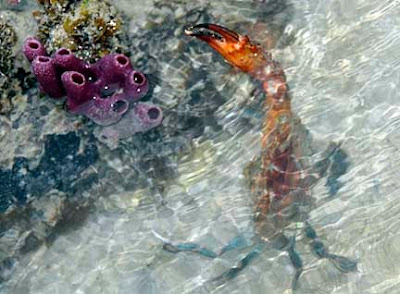 While we were blessed with a cool, cloudy and mostly rain-free morning, the constant breeze plagued our efforts to document the submerged reef of Beting Bemban Besar.

A windy day makes it almost impossible to photograph submerged life even in clear waters. While we may get lovely 'arty' photos, these are quite useless for identification. 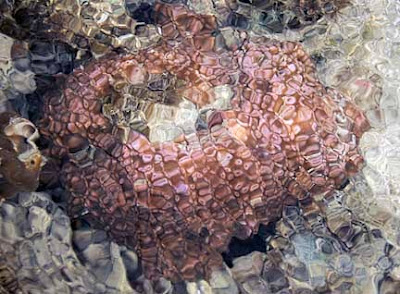 Unless of course, one has an underwater camera! Today, I was finally forced to use Sneaky Swimming Cam extensively. And I was pleasantly surprised at the nice pictures she takes. 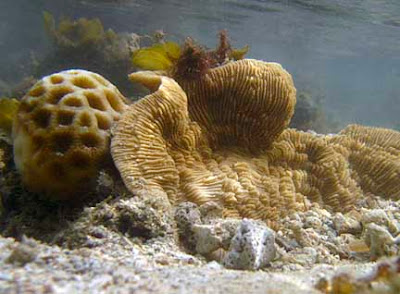 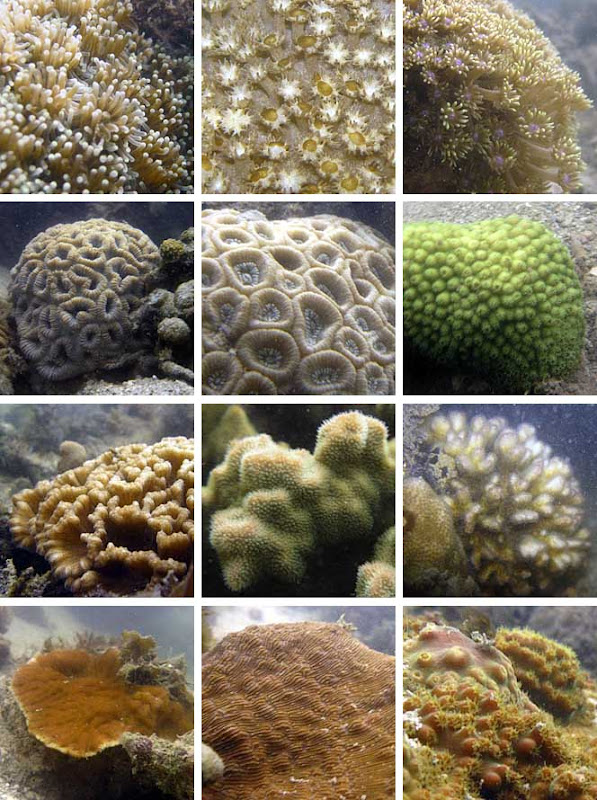 I decided to do the less rich perimeter of the submerged reef. The reef flats here were sprinkled with small and sparsely separated living corals. But included some nice surprises such as Acropora coral (Acropora sp.). 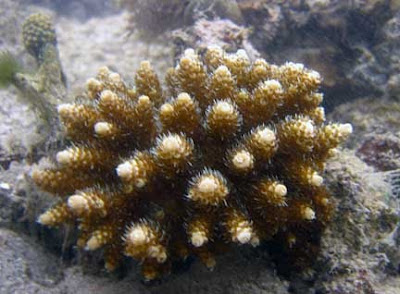 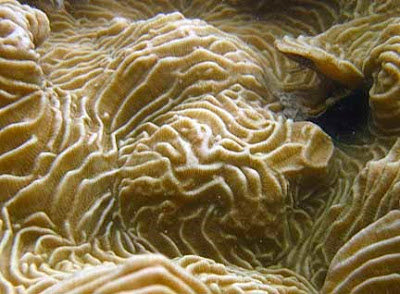 And how delightful to see this encrusting Horn coral (Hydnophora sp.), which I seldom encounter on my trips.

And here's a hard coral that I don't remember seeing before. I think it's a kind of Montipora coral (Montipora sp.), perhaps the ones with ridges?

There were also some Circular mushroom corals (Family Fungiidae). 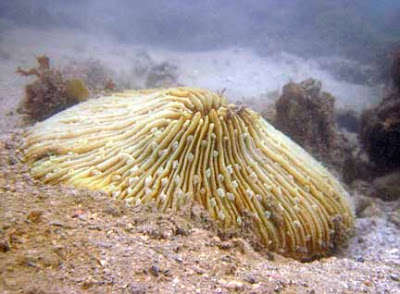 It was also a delight to come across this Anchor coral (Euphyllia sp.). The underwater photos really shows that our reefs are like outdoor natural aquariums! 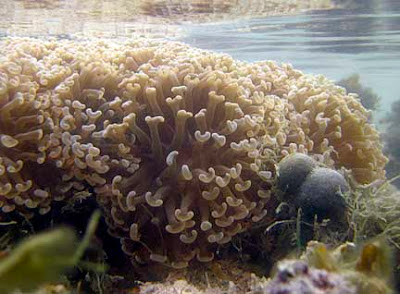 It was also nice to see this small Pizza anemone (Cryptodendrum adhaesivum). Underwater, it was still 'fluffed up' nicely. 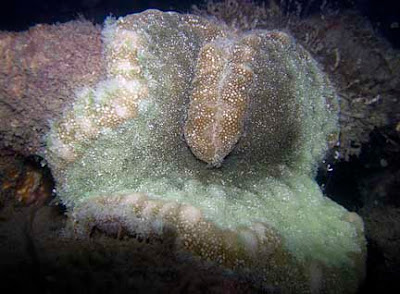 And this other unknown animal, which may be some kind of anemone. 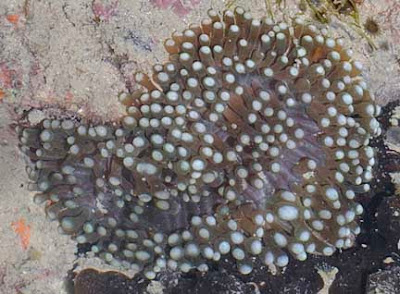 Some parts of the shore are thickly covered in leathery soft corals (Family Alcyoniidae). 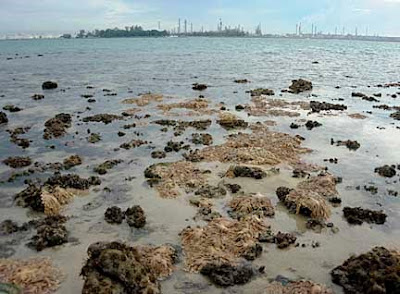 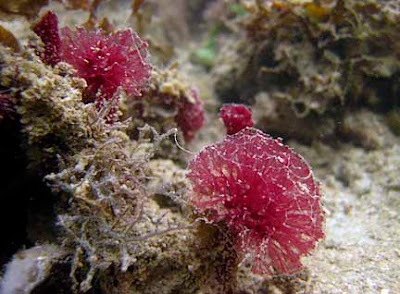 I even managed to get a decent shot of a Ribbon jellyfish (Chrysaora sp.)! 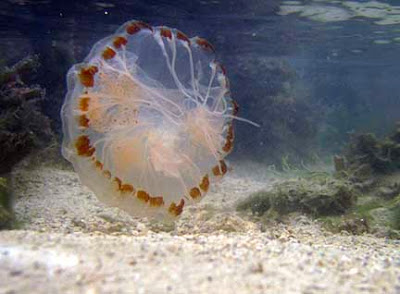 I had so much fun taking underwater photos, I even took photos of seaweeds.

And the seagrasses there. But it's hard to get a sharp photo of the little fishes in the seagrasses. Because it's impossible to look at the LCD panel when shooting at low tide.

The Big Cam, however, still came in handy for fast moving animals, such as this large Burrowing snake-eel (Pisodonophis crancrivorous) which was slowly hunting in the shallow water among the coral rubble.

While this elongated fish is the more commonly seen Carpet eel-blenny (Congrogadus subducens). There were lots of other fishes little and big, but they were really too fast moving in ripply waters for a useful photo.

Today, I also found out where all the Knobbly sea stars were hiding on Beting Bemban Besar!

And the team found TWO giant clams for Mei Lin. Fabulous! They also had lots of interesting sightings. Check out their blogs for all the photos and stories.

Just off Beting Bemban Besar is another tantalizing submerged reef called Terumbu Bemban. I notice there is a nice sandy spot there, a great place to land! We should certainly try to visit it soon. 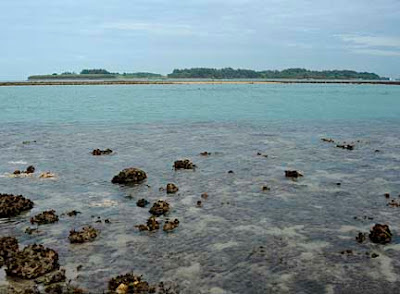 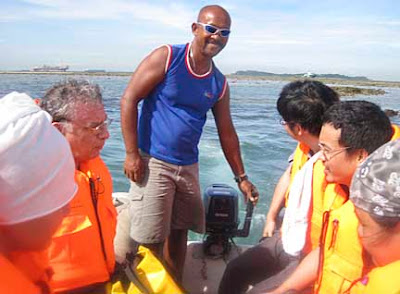 Beting Bemban Besar lies just off Pulau Bukom. Flaring was going on there when we landed at first light. 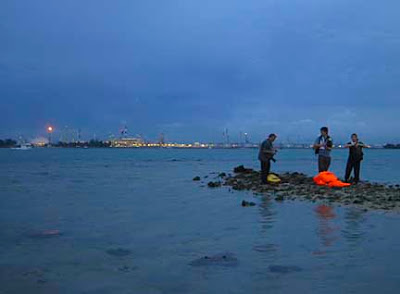 The flare is so bright it reflects off the water even when I took this photo from the other end of Beting Bemban Besar. There's also a lot of smoke coming out from beneath the flare. 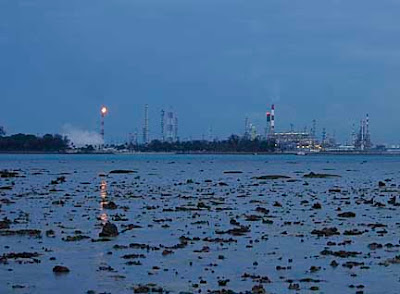 Alas, there seems to be signs of coral bleaching here. 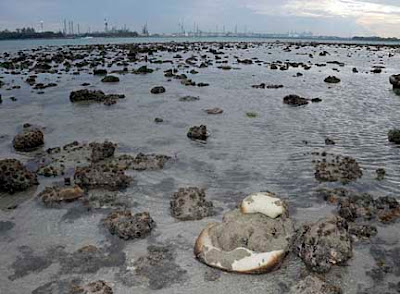 With some large corals turning partially or completely white.

Various kinds of corals seem to be affected. Here's a brain coral (Family Mussidae) that was all white. 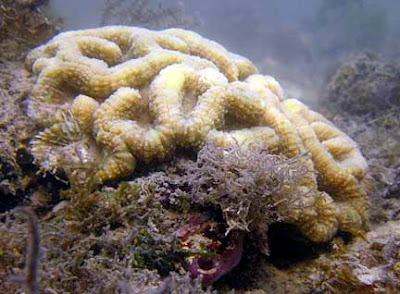 And a Circular mushroom coral (Family Fungiidae) that was also all white. 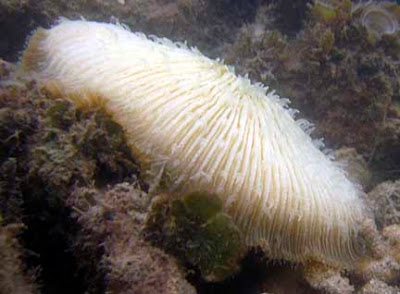 All the stacks on Pulau Bukom were 'smoking' when we were going home. 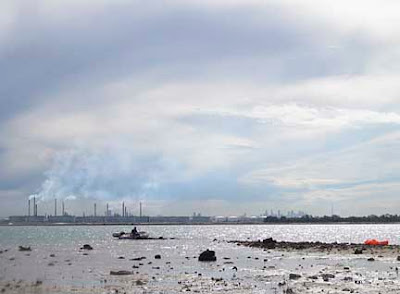 On the way home, the sight of huge piles of sand for the Pasir Panjang Container Terminal extension. This lies just next to Labrador (marked by the red structure on the right). 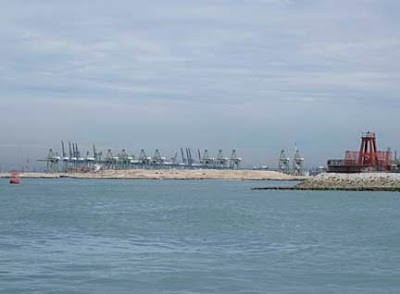 Kok Sheng was guiding at Labrador today, so we missed him on our trip. From his blog post about his trip, it seems Labrador is hanging on despite the massive coastal developments nearby.