It's dark, it's raining, and the tide is still high. Here we are, in the middle of nowhere, squeezing around the single rock sticking out above water. 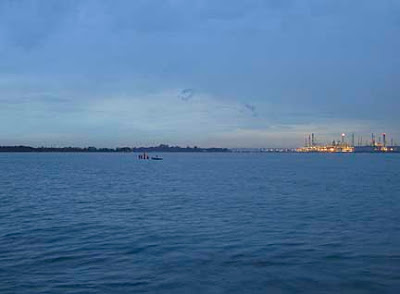 "Give me one logical reason why we are doing this" Stephen says.

"Because it's fun!" I reply. But apparently, this is not considered logical. 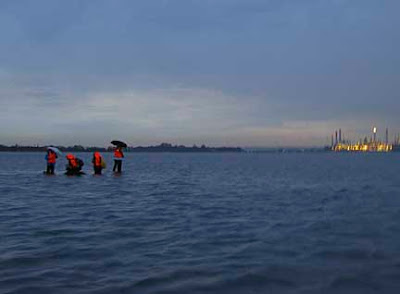 Kok Sheng, as usual, wastes no time. Umbrella and torch in hand, we wade out in very deep water to explore this submerged reef off the Semakau Landfill. We walk very slowly and carefully to avoid trampling the shore. 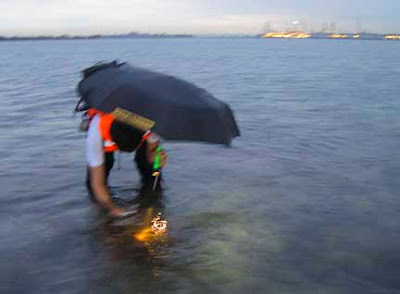 My torch reveals a wonderland in the clear waters! Thickets of Acropora corals! 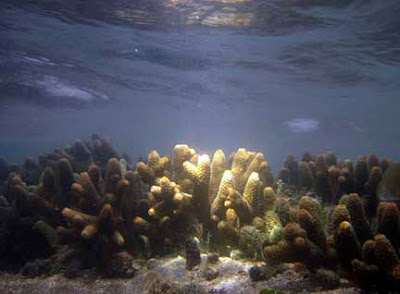 All nicely captured by Swimming camera, who really took the plunge this morning.

It was quite some time before the tide fell low enough for us to see just how huge this submerged reef is. Here with Pulau Jong and the Semakau Landfill on the horizon. It was still raining though. With all the water everywhere, today I only used Swimming camera and Big cam never even left her bag. 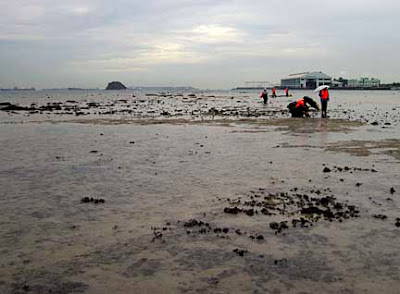 What is particularly awesome for me, was to see lush seagrass meadows! Terumbu Semakau I feel has the next best seagrass meadows of the submerged reefs that I've visited. The best of course are on Cyrene Reef. 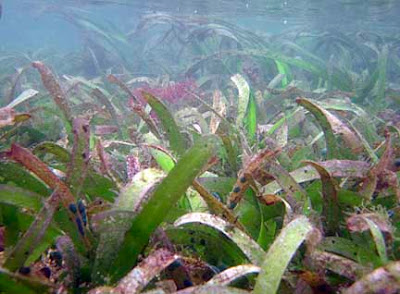 The Tape seagrasses look healthy, with evidence of flowering and fruiting!

The seagrass meadows are quite large, here with Pulau Bukom on the horizon. 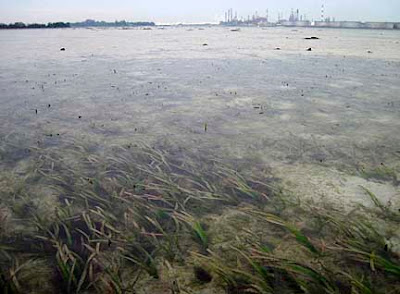 The mangroves of Pulau Semakau are just across a narrow channel. Several egrets were foraging on the shore. 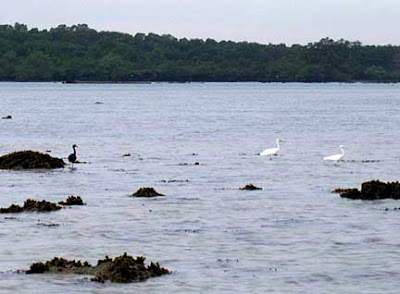 There are all kinds of interesting animals in the seagrass meadows. Such as this pretty peacock anemone. 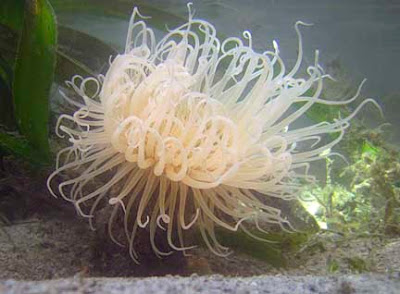 Near the reefier portions, there are some smallish Magnificent anemones (Heteractis magnifica). In one of these anemones, there was a little anemone shrimp (Periclimenes brevicarpalis) and a very very TINY False clown anemonefish (Amphiprion ocellaris) with only one white stripe!

I also saw lots of Frilly anemones (Phymanthus sp.), and some Giant carpet anemones (Stichodactyla gigantea). Kok Sheng saw a Tomato anemonefish in a Bubble tip anemone and took gorgeous photos and a video clips of it! 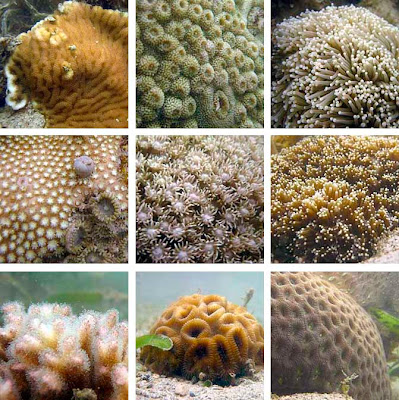 It was particularly heartening to see some Acropora corals (Acropora sp.) here and there.

With clusters of them in the middle of the reef. 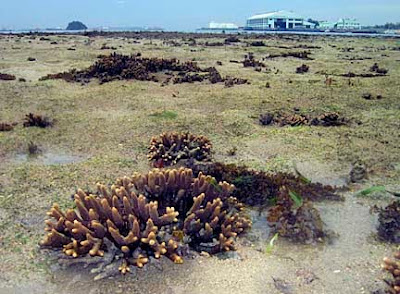 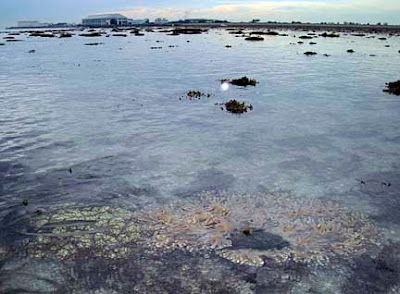 Including one colony of this strange branching leathery coral that we have recently started seeing more of. 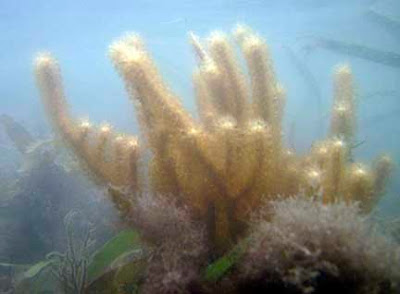 Other interesting animals seen include this beautiful fan worm (Family Sabellidae) living in Crinkled sandpaper coral (Psammocora sp.). The underwater camera gives me an intriguing view of them! 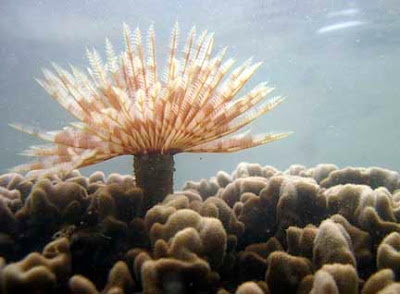 I saw three small Noble volutes (Cymbiola nobilis) today! This one was the prettiest. 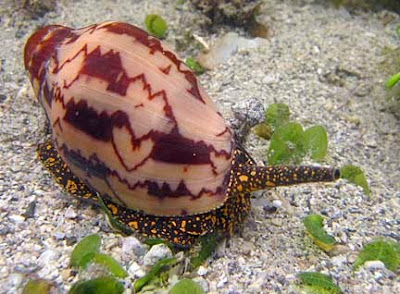 And a very nice green Ceratosoma nudibranch too! 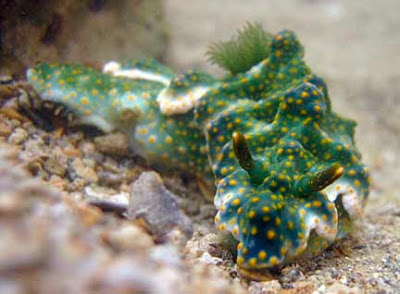 Other tiny crawling things I saw included the very common Blue-lined flatworm (Pseudoceros sp.), and Jorunna funebris. The rest of course saw these and many other slugs.

Since it's my first trip to this shore, I usually try to document everything I see including seaweeds. And the seaweeds look very pretty underwater! 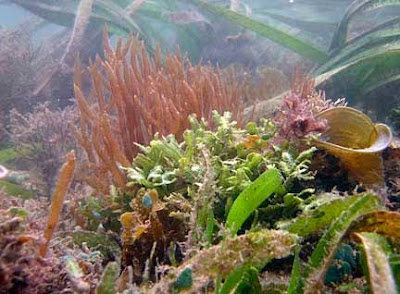 There were all kinds of green seaweeds, looking very fresh and luscious underwater. 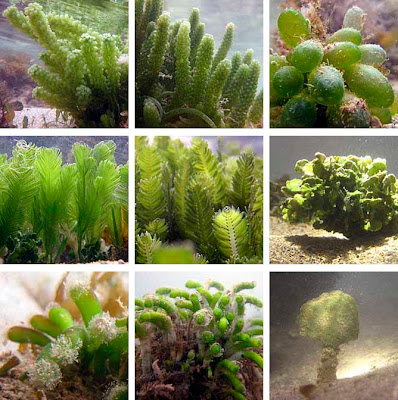 As well as lots of red seaweeds! 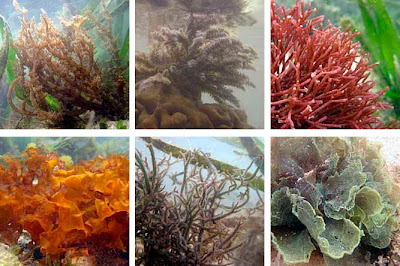 And this is an odd looking seaweed that is stuck on a stick-like thing embedded in the ground. I have no idea what it is. 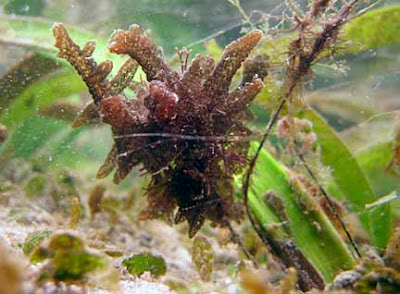 And the sponges looked very pretty underwater too! 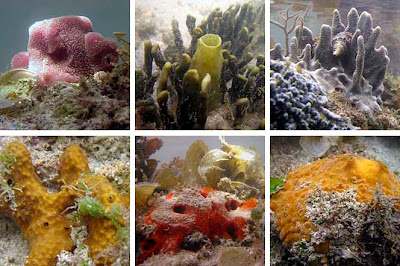 As well as the colourful ascidians!

Sadly, in the middle of the reef there were two huge fish traps that look like they were recently placed there. 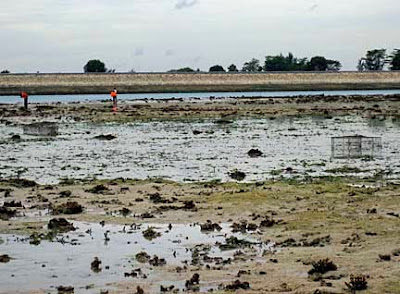 One fish trap was empty but the other had two Blue-spotted fantail rays (Taeniura lymma) and one large rabbitfish (Family Siganidae).

The rest of the team also saw signs of what might have been a boat running aground on the reef, with coral rubble being gouged out in a straight line.

There were also signs of coral bleaching on the shore today. With a small number of corals being affected. Some were only partially bleached. 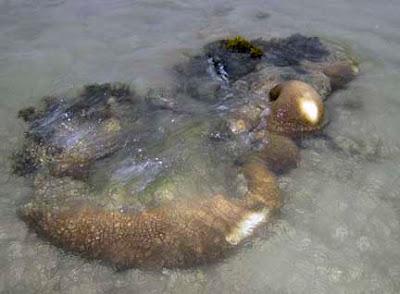 While other large ones seemed completely bleached. 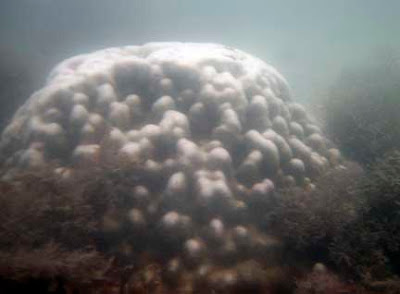 And some smaller ones were also completely bleached.

Corals bleach when they are stressed. Some may recover if the source of stress is removed. So let's hope for the best for this amazing submerged reef.

Despite the difficult working conditions, we had a great trip and will probably want to return again!

It's the last of another grueling series of field trips. And soon we need to prepare for the next round of super low tide predawn trips. Time to catch up on some sleep!

Other blog posts about this trip by