Cost of trashing our parks: $1.4m a year

700 tickets were issued every month last year to park visitors for dumping their trash, revealed a recent Straits Times article. Totalling more than 8,300 tickets for the whole of 2009.

Trashline on Pasir Ris near seagrass meadows, Jan 10
Our recreational beaches only appear clean because of the armies of cleaners who start work well before sunrise. And it costs $1.4m a year to pay for this clean up! That's your and my tax dollars!

At sunrise, an endless row of rubbish collected by cleaners at East Coast Park, Apr 08.
According to the Straits Times article, "from East Coast Park alone, more than 200 tonnes of litter are cleared every month".

Last year, a report for the 21 APEC economies reveals a conservative estimate of damage caused by marine litter to be US$1.265 billion. This is just the cost to fishing and boat industries. This does NOT include costs to wildlife, loss of tourism and lost capital development opportunities, like building a hotel or resort. It also does NOT include the clean-up bill.

During a recent walk at the Chek Jawa boardwalk, the Naked Hermit Crab guides took the opportunity to point out to the kids that rubbish doesn't magically disappear. Someone has to pick it up. So don't throw it irresponsibly in the first place!

There's enormous piles of rubbish in our parks:

According to the Straits Times, "the decades-old littering issue has come to the fore in the last few years, partly owing to an expanding foreign workforce that brings with it different social habits. Almost one in three caught last year were foreigners."

Trash is not only ugly but also kills wildlife. Plastic especially chokes animals that mistake them for food, while small animals can get trapped in them. Plastic is forever and breaks down into increasingly smaller pieces, ending up in the food chain and eventually into us via our seafood.

A project by photographers shared images of albatross chicks that starved to death from being fed plastic litter by their parents. Even though the birds nest in very remote islands far from human civilisation. 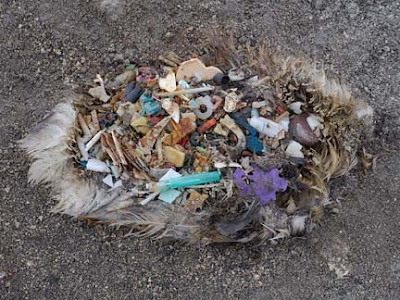 Abandoned fishing lines and driftnets kill dugongs, sea turtles and birds. Even humans can be threatened by them.

What can one person do about this?
Join ICCS!
Understanding the cause of the littering problem is vital. Which is why the annual International Coastal Cleanup Singapore (ICCS) effort is so important. ICCS is NOT just about picking up litter, but is about gathering data about littering problem.

From the ICCS 2009 results, 40% of the trash on recreational beaches come from shoreline and recreational activities.

Registration for ICCS 2010 starts in March.