Clinical trials suggest stinging cells from sea anemones could be effective in injecting substances into our skin. And be used in cosmetic products, such as "anti-ageing" treatments. 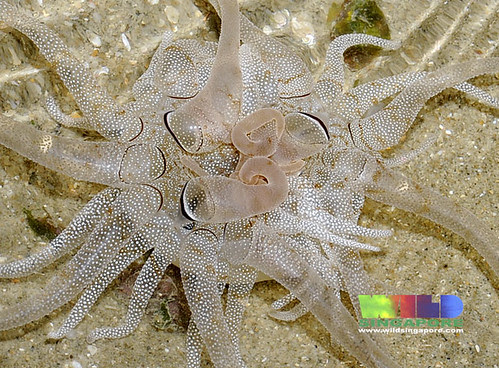 The process involves harvesting stingers from living sea anemones, without 'springing' the stingers. Which is not a big deal. Nudibranchs have been doing this forever. Some nudibranchs retain the stingers from their anemone prey, and relocate the 'unsprung' stingers within their own bodies to protect themselves.

Only humans would use this for something frivolous like anti-ageing cream. Sigh.

Mixing stinging cells from sea anemones into skin cream sounds like a bad practical joke. But this novel approach to painlessly injecting drugs could be a needle-free way to deliver insulin to diabetics.

The stinging cells, or cnidocysts, of sea anemones, jellyfish and other cnidarians contain a coiled hollow thread that unravels rapidly when triggered by physical contact – so rapidly that the pressure on the tip can theoretically reach nearly 7 gigapascals (PDF), higher than the pressure needed to form diamonds within the Earth's mantle. Unsurprisingly, the threads easily penetrate human skin and can even puncture fish scales.

The threads normally inject venom into the target of the animal's attack. But NanoCyte, a firm based in Or Akiva, Israel, is using them to inject drugs instead.
Stinging harvest

"We use a particular stimulus that causes the release of filaments from the body of the anemone," says Yaron Daniely, president and CEO of NanoCyte. It's unclear why the animals release the filaments, which contain stinging cells, although Daniely does not think it's a stress response. Once the team has gathered up the filaments the animal is returned to its tank: "It's a bit like milking a cow," he says.

NanoCyte processes the stinging cells to denature the toxic proteins and extracts as much of them as possible – though this species of anemone is relatively non-toxic to humans to begin with. "Dermal toxicity protocols have been established to ensure that all batches display similar safety profiles," says Daniely.

Stinging cells isolated from the filaments are 60 micrometres long and 8 micrometres wide, and contain a hair-like needle 40 micrometres long. "The key to our work is to be able to control these cells under an environment that doesn't make them trigger [and fire the needle during handling]," says Daniely.

"The actual process we use is secret, but when you're familiar with the mechanisms of activation you can engineer a manufacturing environment that prevents them triggering."
This won't hurt a bit

The stinging cells are added to a cream which contains the active ingredient to be injected into the skin, some of which diffuses into the cells. Applying the cream to the skin triggers the stinging cells, possibly because of exposure to water on the skin and in the air.

One square centimetre of cream-coated skin can contain as many as a million tiny needles, and Daniely says that around one-third of the stinging cells in the cream end up pointing in the right direction to fire their needles into the skin – but because each is just a few micrometres thick, the process is painless.

Once discharged, each stinging cell acts as a tiny pump to deliver its content down the needle, also drawing in the active ingredient from the cream.

The walls of stinging cells don't allow very large drug molecules to get through, however, says Daniely: "After years of trial and error, we have a clear idea about what types of molecule work well with our system."
Dentists and diabetes

Last week, NanoCyte concluded phase II clinical trials in the US of a cream containing lidocaine, a local anaesthetic used to relieve itching or to numb the mouth during dental work. The firm hopes to bring cosmetic products, such as "anti-ageing" treatments, to market in 2010. "We have several collaborations with some of the top 10 cosmetic companies in the world," says Daniely.

Preliminary work with mice suggests it is possible to use the approach to fire insulin through the skin to reach the bloodstream, he adds.

"It is exciting that this approach has reached phase II trials," says Mark Prausnitz at the Georgia Institute of Technology in Atlanta, who works on drug delivery methods. Using stinging cells is "very clever and innovative", he says, but he points out that pharmaceutical applications have more rigorous requirements than cosmetic ones. "There is a lot to learn before we can know its utility for drug delivery."