There is a huge man-made lagoon on Seringat-Kias, a reclaimed area. Ever since Kok Sheng posted on his intriguing finds there in Dec 08 and Feb 09, I have wanted to have a look at it. 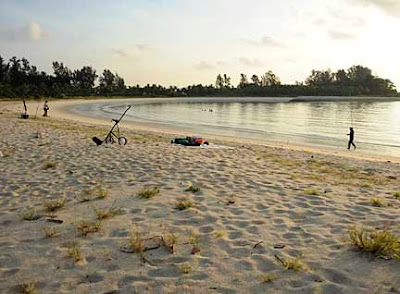 We arrive shortly after sunrise and there are already lots of fishermen on the shore. Some looked like they were there overnight.

The tide isn't very low, but as soon as we hit the low water mark, we start seeing signs of life. Acorn worms (Class Enteropneusta) were busy making coils of 'processed sand'. And a little Horn-eyed ghost crab (Ocypode ceratophthalmus) was hidden in the sand.

There were also several anemones including the Plain sea anemone (three of them), a Striped sand anemone and one Peachia sea anemone (Peachia sp.). 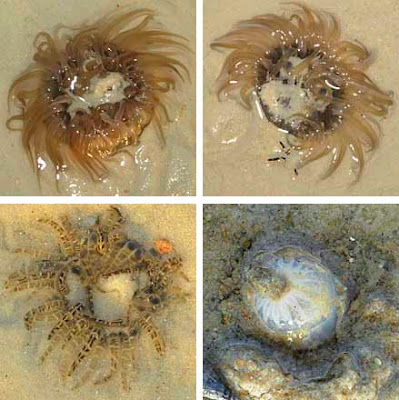 In the glow of the early morning, lots of busy little whelks were ploughing through the fine silty sand. On the left is the little Common whelk (Nassarius livescens) and the right the Black whelk (Nassarius pullus) which has a broad flat underside. They do look very similar from above.

As well as a Tiger moon snail (Natica tigrina) and several of the yet to be identified Pink moon snails.

Moon snails are fierce predators. They feed on bivalves and snails. A moon snail has a gland at the tip of its proboscis that secretes an acid to soften the victim's shell. With its radula, a hole is created. The hole is usually neat and bevelled. This little pink bivalve appears to be a victim of such a tactic.

Some parts of the shores were covered with countless little Zoned horn snails (Batillaria zonalis). And I had to look closely before I saw the tiny little Dubious nerites (Clithon oulaneinsis) among them.

We came across one of these odd conch snails that we have been puzzling over. We have no idea what it might be.

As the tide went out, in the water we found some living Laganum sand dollars! Wow! 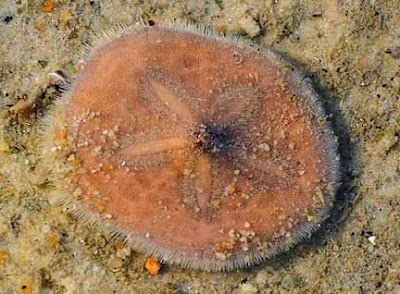 There were also Common sea stars (Archaster typicus) on the shore! 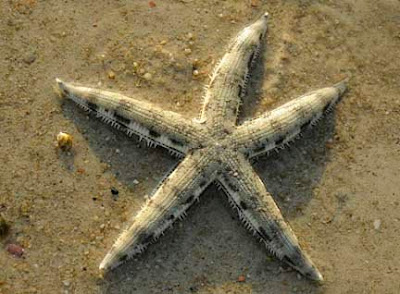 The lagoon is quite large. And later in the morning, a large leisure craft pulled into the lagoon with a dog barking on it. 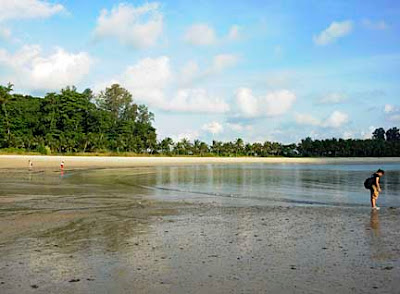 In the deeper parts of the lagoon, there were seagrasses! Lots of tiny little Spoon seagrasses (Halophila ovalis) and Needle seagrass (Halodule sp.). Kok Sheng had also found Sickle seagrass (Thalassia hemprichii) in the seawall on his visit there!

Liana spent more time exploring the lagoon while the rest of us headed out to Lazarus Island. 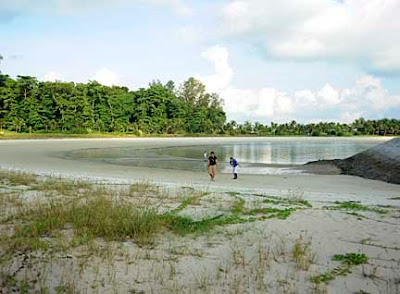 We head past the manicured lawns of Seringat Kias with Kusu Island next to us. 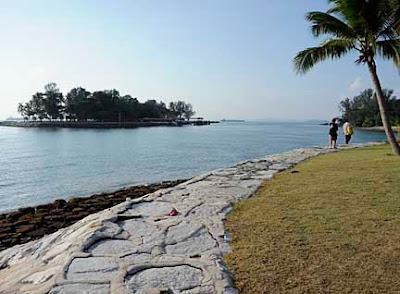 Leaving the seawalls of Seringat Kias, we hit the natural shores of Lazarus. 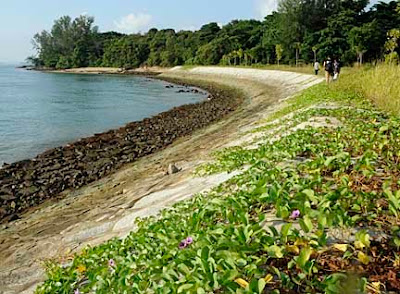 Seringat-Kias was built by reclaiming the submerged reefs of Seringat (Pulau Renget) and Kias and joining these to the existing Lazarus Island (also known as Pulau Sakijang). 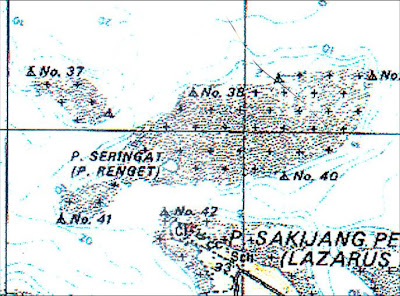 The reclamation was completed in 2000. The resulting man-made area is sometimes also called Kias-Seringat. Sometimes it is also incorrectly called Lazarus Island, which is another area altogether. 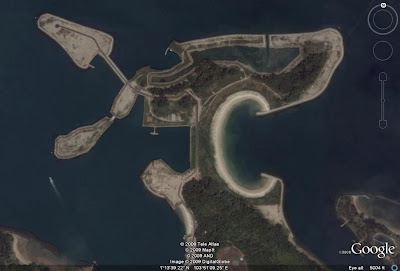 It's seven years and many millions of dollars after the natural reefs were buried.

In 2000, the plan was to offer visitors a Mediterranean resort-like setting only 17 minutes away by ferry, patterned after Italy's renowned vacation spot, Capri. Details later revealed included plans for a five-star 290-room hilltop hotel, a three-star 170-room beachfront hotel, 70 waterfront homes and 1,700 units of housing. (from Various plans for Southern Islands, by Teh Jen Lee, The New Paper, 31 Mar 04)

When plans for the Integrated Resort on Sentosa was announced in 2004, "an MTI spokesman said these plans for the Southern Islands will be 'reviewed'". At that time, there was even talk of a road from Sentosa to the islands, or a causeway, like the one linking the mainland and Jurong Island. (from Road to link Sentosa to St. John's Island? by Teh Jen Lee, The New Paper, 31 Mar 04)

In 2004 it was announced: "Soon you may be able to sun-tan on a pristine new beach a short ferry ride away. Given that trash is often found on mainland beaches, you'll be glad to know that an 800-metre long beach on Pulau Seringat in the southern islands is almost complete." (Our newest man-made beach, by Teh Jen Lee The New Paper, 24 Sep 04)

Thousands of cubic metres of sand were imported from Indonesia to make the beach. The sand was checked for sandfly eggs so that visitors will be spared the insect's bites, which can be itchy. Another $120 million was spent to bring water, electricity, gas and telecommunication infrastructure from Sentosa to the islands. (from The newly redeveloped St John's and Lazarus islands have beautiful beaches and sparkling waters, by Teh Jen Lee The New Paper 2 Dec 06)

In 2006, massive landscaping was reported of the 1km reclaimed beach on Lazarus to simulate a natural environment so that it would look 'natural and wild'. 5,000 lorry-loads of soil measuring two storeys high when piled up were brought in by barges, an entire coconut plantation in Malaysia was bought, about 1, 000 trees was trucked and shipped to the island. To meet the 36 cubic metres of water needed every day to keep the plants growing, a 400-sq-m-wide pond was created to collect rainwater and ground water tapped. This was part of the $60 million worth of reclamation and infrastructure work on the southern islands of Pulau Seringat, Kias, St John's, Lazarus, Kusu and Sisters' islands. (from Lazarus beach makeover wins firm top landscaping award, by Tan Hui Yee The Straits Times 13 Dec 06) 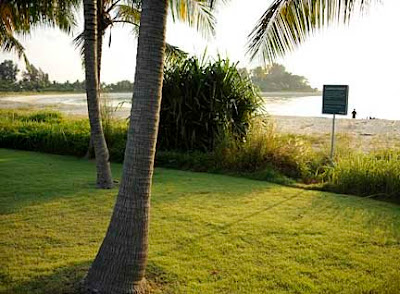 The carpet grass off the man-made shores of the Seringat-Kias lagoon, with imported coconut trees, this morning.

In Dec 06, it was announced that Singapore Tourism Board (STB) may launch a request for concepts, possibly in the first quarter of 2007. One idea is to develop the islands into a 'premium resort', a getaway for the rich. Other ideas include eco-tourism and cultural tourism, and even possibly a third casino in Singapore, although it is not known if STB would consider offering a casino licence to any developer of the islands. (from The newly redeveloped St John's and Lazarus islands have beautiful beaches and sparkling waters, by Teh Jen Lee The New Paper 2 Dec 06)

In Jan 07, it was announced that third integrated resort was being considered. It will be on a smaller and more luxurious scale than either of the two resorts. Most of the development will likely be on 30 ha of reclaimed land at Lazarus, Renget and Kias Islands. The total development site, comprising all seven Southern Islands, adds up to 115.6 ha - almost a quarter the size of Sentosa Island. (Southern Islands home to third IR? Smaller, more luxurious resort will feature F&B, spa, health and beauty facilities, Business Times Singapore 18 Jan 07 by Arthur Sim)

In Aug 08, with the stepping down of Mrs Pamelia Lee "vision of the southern islands as an eco-paradise hangs in the balance with the departure of their champion". The fate of the Southern Islands lies in the hands of Sentosa Leisure Group's new CEO Mike Barclay. He takes over on Aug 25. (Southern islands at crossroads: Fate of eco-paradise in the balance after fervent champion's departure, Serene Goh, Straits Times 13 Aug 08)

To date, I don't know of any plans publicly announced for Seringat Kias. There was this sign on the beach today. 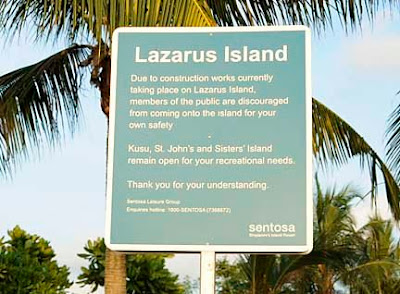 More background on Seringat-Kias and Lazarus