Leaving the man-made Seringat-Kias, we head down to visit the natural shores on Lazarus Island. 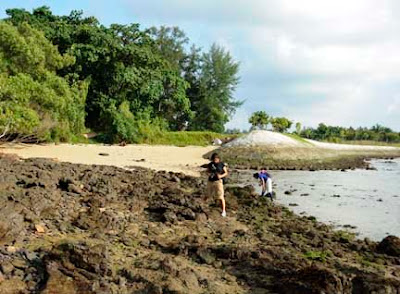 The island is ringed with rocky shores, and has cliffs cloaked with all kinds of natural coastal plants and trees. 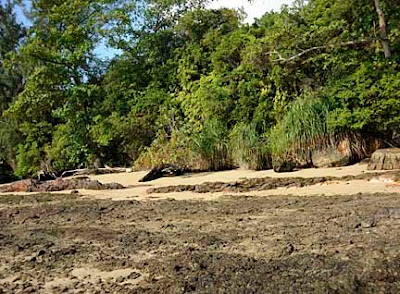 Among the many different trees and plants was this large fig tree with bright orange figs. I'm not too sure exactly what kind of fig it is. Joseph Lai did a fantastic job of documenting the flora of Lazarus Island in Dec 06. Joe notes that "Lazarus has the rare distinction for being home to possibly the last surviving Sindora wallichii tree [of the Changi Tree fame] found in the Southern Islands of Singapore today." 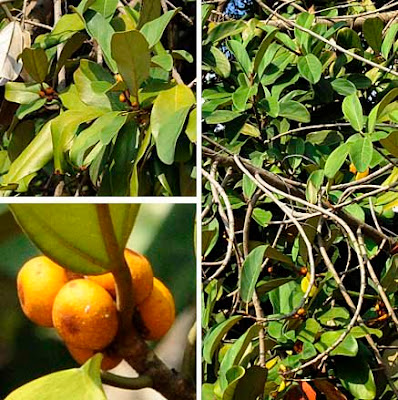 At the Southern tip, there are sea walls that have created a lagoon. 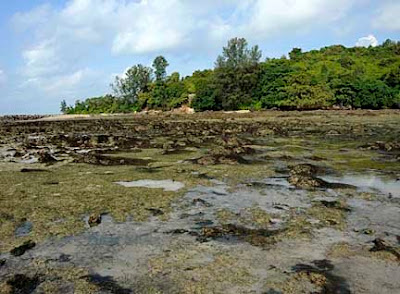 Like many of our man-made lagoons, life has crept back in. There were a few large colonies of hard corals in the lagoon. Most were Favid corals (Family Faviidae), and I saw one small colony of Blue corals (Heliopora coerulea). 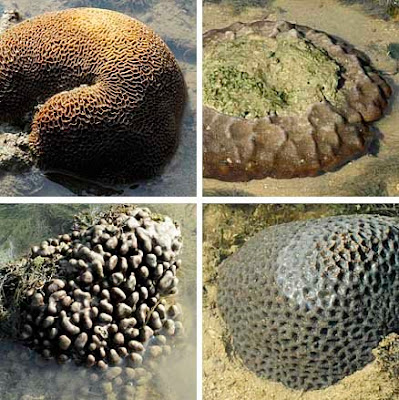 There are large patches of Spoon seagrasses (Halophila ovalis) and Needle seagrass (Halodule sp.) creating mounds with pools of water among them. 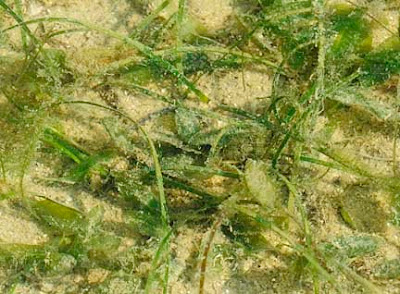 Among the pools were lots of little fishes, snapping shrimps, crabs and the usual complement of marine life. On the mounds were lots of Orange fiddler crabs (Uca vocans).

I came across two Giant carpet anemones (Stichodactyla gigantea), but alas, they didn't have any anemonefishes. 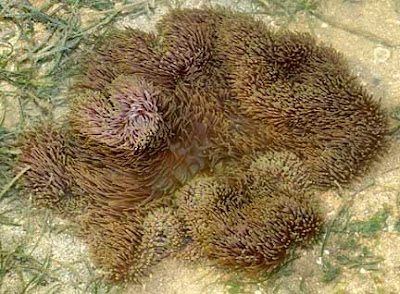 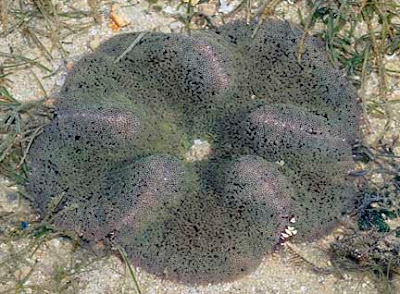 And one had a pair of anemone shrimps (Periclimenes brevicarpalis)! 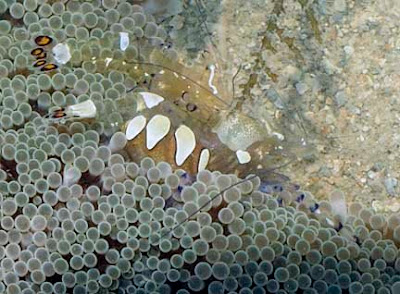 What a delight to encounter the Black-tailed sea hare (Aplysia dactylomela). I've only seen this once before, on Sentosa in Jun 05. It is very well camouflaged. But when it feels threatened, it opens its mantle flaps to reveal a startling pattern of white spots on a dark background. 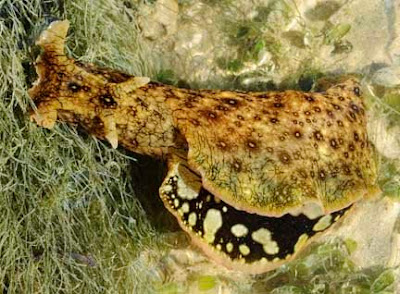 The rest of the team saw nudibranchs, octopus and other interesting marine life too.

It was a bit of a challenge to get back to our start point. Negotiating a crumbling sea wall and a rather ferocious thorn plant. And the western side of Lazarus is almost all rocky! 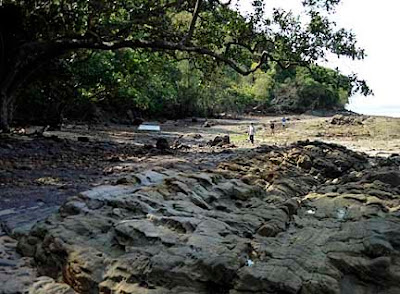 It was a struggle. Either getting a free foot reflexology workout on pebbly parts, or risk slipping on the smooth rocky parts. 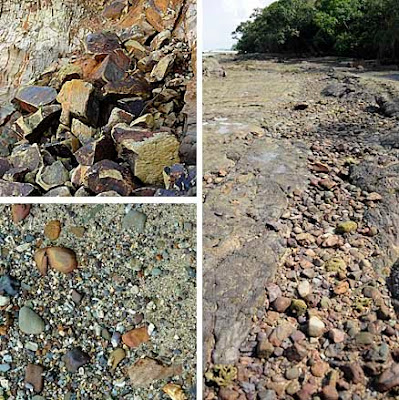 But it was fascinating to come across many different geological formations (none of which I knew anything about). There were parts of the cliff that seemed to have fractured into angular bits. These are eventually worn away by the waves into smooth pebbles and eventually into bits of sand. And there were some really huge boulders on the shores too! 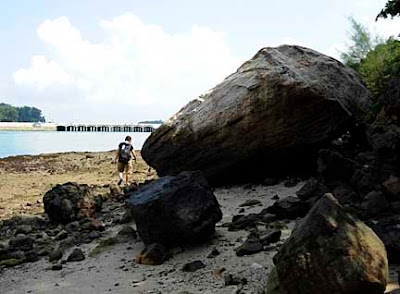 The rocky shores, however, are a great place for marine life. Nerite snails (Family Neritidae) were really busy laying eggs in this little rock pool under the shady trees. 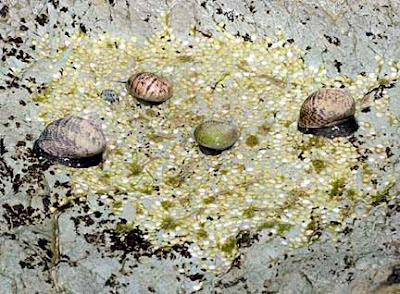 Elsewhere, there were clusters of other tough snails such as the tiny Knobbly periwinkles (Nodilittorina trochoides) and the handsome pin-striped Sulcate planaxus snails (Planaxis sulcata).

Some trees also manage to grow here, like this very persistent mangrove tree. It looks like a Perepat (Sonneratia alba). 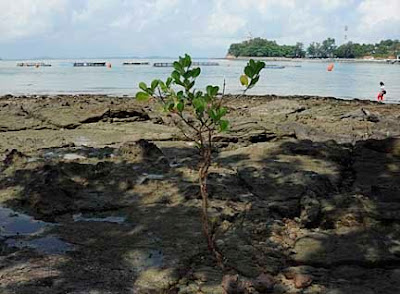 And there was a patch of Sickle seagrass (Thalassia hemprichii) on the shore too! 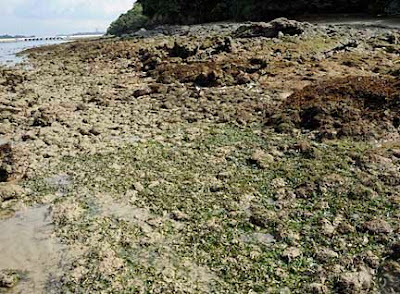 The seagrasses looked a little burnt though. 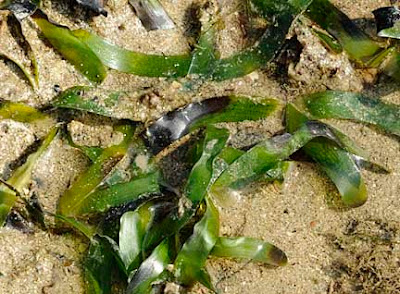 I didn't get a chance to check out the reefs on the western side. But Liana did this stretch at low tide and she said she saw hard and soft corals and other interesting stuff.

It was really hot, and the team were exhausted by the end of the trip. We had to do yet one more obstacle course to get past the ferry onto our boat. And Ivan was missing!! It turned out the foot reflexology segment had sorely slowed him down. Things only went back to normal once we reached the mainland and guzzled some ice cold drinks.

We were earlier also plagued by little prickly seeds of weeds that stuck all over our pants legs. They poke painfully and are horribly tedious to remove. Pondering over their name: "Evil Weed Seeds of Death"? "Velcro Prickles from Hell?", I've only just realised that Adrian has already identified it in this very amusing blog entry. He said he did the post so that "the next time someone gets poked by it, at least can curse it properly". Unfortunately, its scientific name doesn't make for a pithy swear word.

The western shore of Lazarus has been affected by the construction of the causeway linking Lazarus and St. John's Island. There were many people fishing and hanging out on the causeway today. 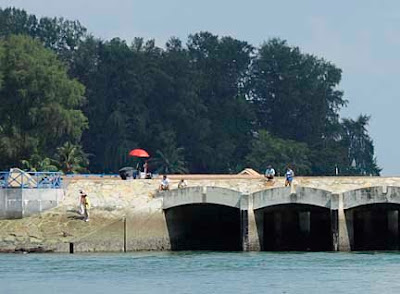 Also, there is a fishfarm located almost right on top of where the reefs on Lazarus used to be. 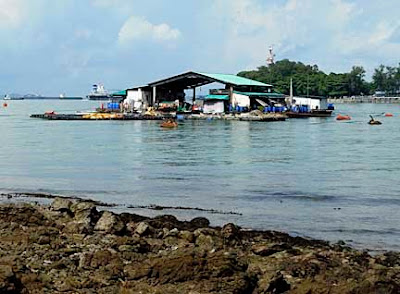 They not only have many fish pens in the channel between Lazarus and St. John's, but also seem to have 'parked' some of their fish pen floats on Lazarus. It is perplexing how this sort of behaviour can be allowed. 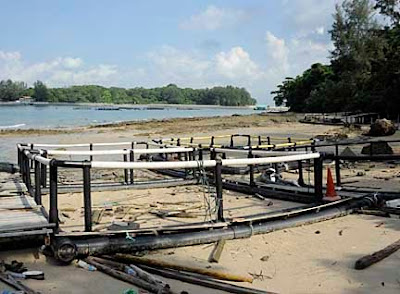 Here's a Google Earth view of Lazarus and its adjoining Seringat-Kias segment, and the causeway linking it to St John's Island. 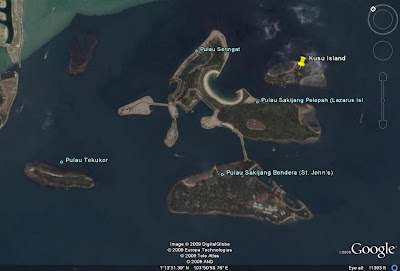 Well, that's the end of another exhausting eight days of low tide trips. A few days rest and it starts all over again.