Terumbu Raya is separated from Pulau Semakau by a rather narrow channel. Along this channel were splendid sights of corals! 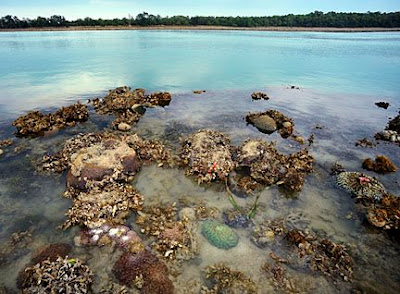 In some parts, many different kinds of corals were growing near one another. 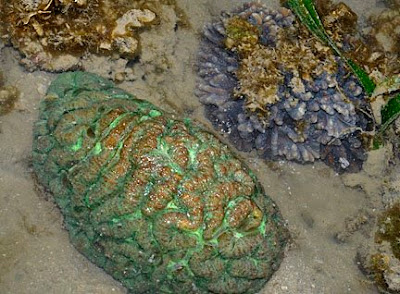 Hard corals are colonies of tiny animals called polyps that live together. Each polyp builds a tiny skeleton called a corallite. The shapes and arrangement of corallites give rise to the different shapes and textures of the colony.

This is the elegant Moon coral (Diploastrea heliopora) which has neat corallites. So far, I've only seen it at Sisters Island and Pulau Jong. I've also seen it on Pulau Semakau.

But on Terumbu Raya there were many large colonies of Moon coral in a variety of colours from beige to pale pink to rose to this bluish one. It was a fantastic sight!

This hard coral with tiny O-ring shaped corallites, on the other hand, is more commonly seen on many of our shores. But it is easy to mistake it for the Moon coral.

Another special hard coral is this Bracket mushroom coral. Podabacia species and Lithophyllon species both have this kind of corallite and colony structure. These corals grow attached to a hard surface even as an adult. Alas, I didn't come across any other kind of mushroom coral (Family Fungiidae), although I saw some skeletons of dead ones.

Ridged plate corals (Merulina sp.) are always a delight to encounter. They come in a variety of colours but all have thick ridges radiating from the centre to the edge of the plate-like colony.

Pretty carnation corals (Pectinia sp.) were also seen in numbers. These come in shades of blue, green, yellow and even orange.

Here's one carnation coral half in and half out of water. So you can see the delicate fluted pattern of the corallites that are usually hidden under the thick fleshy tissues when the colony is submerged. All hard corals are fragile even though they may look tough. We should not touch, much less step on them.

There were several large and beautifully formed Lettuce corals (Pavona sp.). In stunning colours too! The tiny textures on the 'leaves' of the colony distinguish this coral.

This looks like another rare hard coral, the Brain anchor coral (Euphyllia ancora).

The Family Euphyllidae includes corals with tentacles that have U- or anchor-shaped tips. The species are differentiated by the shape of the hard skeleton, which is hidden when the long tentacles are extended. In the Brain anchor coral the corallites form meandering valleys with separate walls. So far, I've only seen this coral on Kusu Island, St. John's Island and Raffles Lighthouse.

The Branching anchor coral (Euphyllia paraancora), on the other hand, has corallites that are like trumpets: long, tubular widening to a circular shape at the top.

This kind of anchor coral is more commonly seen on our other shores.

Other more common hard corals were also seen. Such as the Brain corals (Family Mussidae).

This may be a Lobed brain coral (Lobophyllia sp.) .

While this may be the Grooved brain coral (Symphyllia sp.).

There were also lots of hard corals with maze-like patterns.

These are probably members of Family Faviidae, which are difficult to distinguish in the field.

Other commonly seen but still delightful to encounter hard corals include the Galaxy coral (Galaxea sp.).

As well as the lovely Anemone coral (Goniopora sp.)

There were lots of other kinds of hard corals that I just didn't photograph. 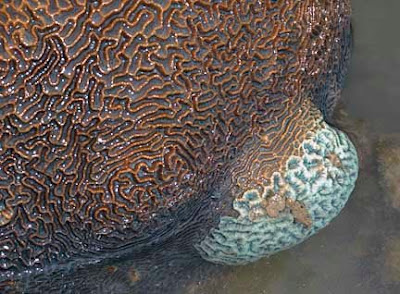 I also came across this odd situation. I'm not sure if the blue portion is a sick part of the brown coral? Or a different species of coral? Hard corals are quite fascinating and there's always something new to learn about them. 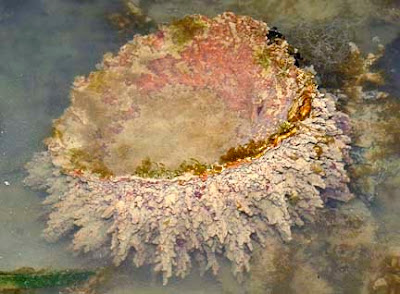 This is not a hard coral but a really huge sponge. The Neptune's cup sponge (Xestospongia sp.) is not commonly seen, but there were several of these on the Terumbu Raya reefs. 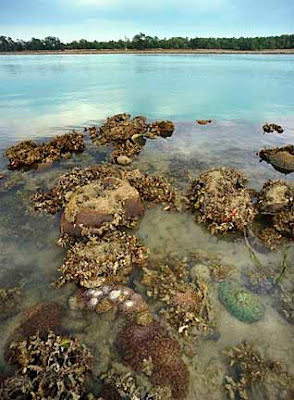 The stunning reefs of Terumbu Raya are certainly worth a repeat visit! We shall have a wait a bit, though, until suitable low tides resume.
Posted by Ria Tan at 1:45 PM