Where does your poop go? EIA for new outfall in the sea for public viewing

After you flush your poop, it and industrial wastes, are processed with the best technology available. Whatever can't be reclaimed is discharged into the sea surrounding Singapore through an outfall.
A new outfall (Singapore's third one) is planned by PUB at Tuas View, south of Tuas Power and an EIA study has been carried out to determine the potential environmental impact of the plant’s outfall discharge. The EIA is now available for public viewing.


From the Gazette notice

Anyone who wishes to view said report after 27th October 2015 can contact Mr Mark Wong to make arrangements to view it.

How does the Deep Tunnel Sewerage System work?

From the PUB Annual Report 2013: The DTSS comprises two huge crisscrossing tunnels up to 6m wide, laid 20–50m deep underground. Stretching across the island, the deep tunnels are connected to the existing sewerage system via a network of smaller link sewers. Used water fed into the deep tunnels is directed by gravity towards two centralised water reclamation plants (WRP), on the western and eastern ends of Singapore, where it is treated. A portion of the treated water is further purified as NEWater; excess treated water that is not used to produce NEWater is discharged into the sea.

How is an outfall constructed?

Here are some photos and glimpses of how the Changi outfall was built.

From the Boskali website: The Changi Outfall consists of two discharge pipelines, each fi ve kilometers in length and a third pipeline of one kilometer in length for future extension. The pipelines consist of reinforced concrete pipes of which the largest pipes have an internal diameter of 3 meters, a length of 8.4 meters and weigh 105 tons. The land section of the outfall is 180 meters in length and is sloping from 8 to 16 meters in depth. An reinforced concrete slab on piles supports the pipelines. The marine section of the outfall is approximately 5 kilometers in length and reaches a water depth of 50 meters. The pipelines are situated directly next to each other in a trench, supported on a bedding of rock and backfilled with three layers of rock for protection against dragging and dropping anchors. Series of diffusers are located at the end of the two discharge pipelines and rise above the existing seabed at a water depth of 40 meters. The diffusers are protected by reinforced concrete structures.

From the Archirodon website: The project included the construction of 5.2 km long outfall, consisting of two 3,000mm internal diameter reinforced concretepipes laid in a single trench and the third pipe in separate trench. The land section of outfall is 300m and marine section is 4,900m, and is laid in depth varying from -35m to -46m. The main activities include survey, manufacture of pipes and diffuser elements, onshore and offshore trench excavation, laying of pipelines and testing and commissioning of completed outfall. 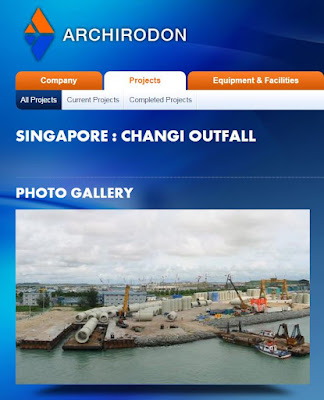 Thanks to Neo Chai Chin for this update on the EIA

SINGAPORE — Environmental experts have recommended a slew of monitoring measures to be taken for the construction and operation of the Tuas Water Reclamation Plant, which national water agency PUB said it will review and implement progressively as construction begins in 2017.

The Tuas Water Reclamation Plant, which is part of the Deep Tunnel Sewerage System that will meet Singapore’s long-term needs for water collection, treatment, reclamation and disposal, will serve the western part of Singapore. Construction of the discharge point for treated used water — called the outfall — will begin after 2021 at Tuas Basin. The plant will handle used water from around 2024.

In an Environmental Impact Assessment (EIA) report commissioned by PUB, experts at DHI Water and Environment said the discharge of treated used water is expected to have minor to moderate negative impact on surrounding corals and seagrass, and slight negative impact on mangroves. There will also be an increased risk of algal blooms, which are of minor negative impact to overall ecology and biodiversity. These are largely due to the levels of nitrates and phosphates in the discharged water.

The good news: There will likely be no impact on marine animals such as dugongs and sea turtles.

Overall, the building of the plant is a more sustainable approach compared with a no-build scenario, as it would replace the Ulu Pandan and Jurong water reclamation plants, which use older technology, and free up land.

The EIA report, currently available for public inspection, suggested the annual monitoring of seagrass beds once the plant begins operation, given the “ecological importance of seagrass meadows in the Southern Islands and presence of internationally protected species”.

Although coral communities have been shown to adjust to local water quality and conditions, DHI suggested seasonal monitoring of coral reef conditions and nitrate levels.

A monitoring programme for phytoplankton — plankton that require sunlight to live — should also be in place to detect cells or toxins “sufficiently early”. The programme will help protect public health, fishery resources and the ecosystem structure, DHI said. Phytoplankton populations, water temperature and salinity and chlorophyll levels are among items that should be measured.

DHI found that the discharge of treated used water would be of negligible risk to fish farms around Pulau Semakau, more than 10km away.

Asked if PUB intends to adopt all mitigating measures recommended by DHI, it said the Deep Tunnel Sewerage System Phase 2 and Tuas Water Reclamation Plant project spans more than 10 years, and all proposed monitoring measures will be “reviewed and implemented progressively as the project is being developed”.

The treated used water to be discharged will be less than 35 per cent of the volume received by the Tuas plant, as the bulk is used to produce NEWater. The discharge does not include solid waste from households and industrial sources, which is extracted from used water and used to produce biogas before being incinerated.

The Tuas plant will use advanced technology, such as membrane biological reactors that greatly reduce the level of organic matter and total suspended solids in used water, compared to conventional treatment processes. This means its treated water will be of high quality.

The Tuas plant, which will result in the Ulu Pandan and Jurong plants being phased out by 2030, could adopt even more advanced technology when major upgrading is expected in 2050, noted the report.

Representatives from the Nature Society (Singapore) have seen the EIA report. Mr Stephen Beng, who chairs the society’s marine conservation group, said the EIA was comprehensive and a positive step from Phase 1 of the Deep Tunnel Sewerage System completed in 2008. An EIA was not done for Phase 1, he said.

Calling for the sharing of mitigating measures from the project’s environmental monitoring and management programme (EMMP), he said: “It’s going to be over a 25-year period. Coastal landscape and environmental conditions change, so baselines have to change as well.”

Periodic updates on the EMMP when the plant begins operations will help the public know what PUB is doing about the “growing risks of the outfall on corals and seagrass”, he added. “It’s the connected nature of the marine environment where individual stressors act in concert, resulting in cumulative effects on marine ecosystems. That’s why it requires constant monitoring.”

The executive summary of the EIA report could also be posted online to be more accessible to the public, suggested Mr Beng. The report can be viewed by appointment at the Environment Building.

The last two EIAs that PUB conducted took place in 2011 for Tuaspring Desalination Plant and this year for the third desalination plant to be built in Tuas. Both reports were open for public viewing, said the PUB spokesperson.

Currently, EIAs are required for major development projects, especially those near sensitive areas such as nature reserves and marine and coastal areas. PUB incorporates EIA recommendations in project tender specifications to ensure minimal impact and disruption to the surrounding environment, she said.