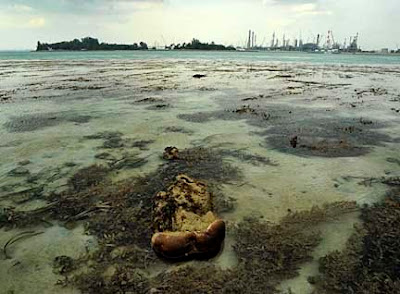 Terumbu Raya is a submerged patch reef that lies just off Pulau Semakau and opposite Pulau Hantu. 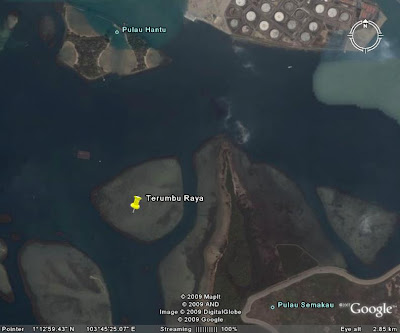 'Terumbu' is the Malay term for submerged reefs. And Singapore has lots of terumbus. Kok Sheng had earlier blogged about the 30 terumbus of Singapore! Well, this is our first effort to try to visit some of them.

When we reached the vicinity, there was only a broad expanse of water! Not a rock sticking out. We arrived too early! 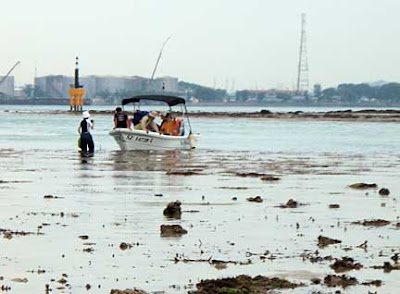 But soon enough, the tide fell, and Melvin and the feisty boat aptly named "No Problem" made the brave, virgin, first-time landing on Terumbu Raya. Melvin found a nice spot with not too much sargassum and no hard corals. Just lots of soft, safe sand. Yippee! 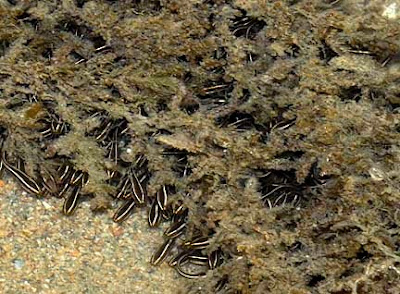 It's not good to step on Sargassum seaweeds because these shelter lots of animals. While we REALLY don't want to step on a Hollow-cheeked stonefish (Synanceia horrida), we also don't want to squash tiny animals such as these Lined eel-tail catfishes (Plotosus lineatus). 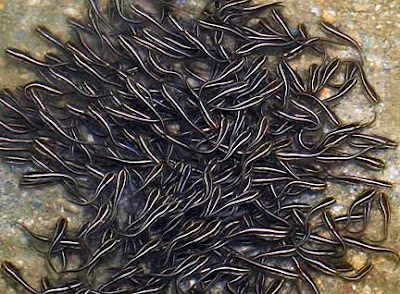 These fishes tend to gather in 'balls' of many individuals, especially when they are still small. The living squirming mass of fish moved slowly in the shallow water like some weird giant amoeba.

Like on Pulau Semakau, at low tide, there were plenty of pools on the shore, sheltering all kinds of animals. 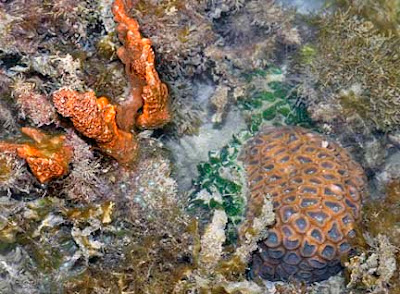 These included rather larger hard corals than on Pulau Semakau. 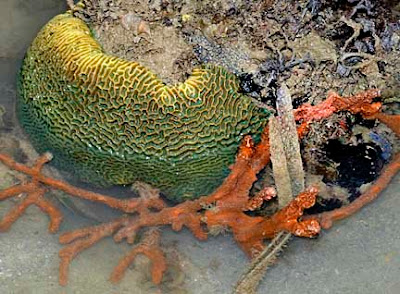 It seemed to me that the water in the pools was also clearer, than on Pulau Semakau.

I also came across the what seems to be standard trio of nudibranchs on Pulau Semakau: the black and white Polka-dotted nudibranch (Jorunna funebris); and the Orange-spotted gymnodoris nudibranch (Gymnodoris sp.). 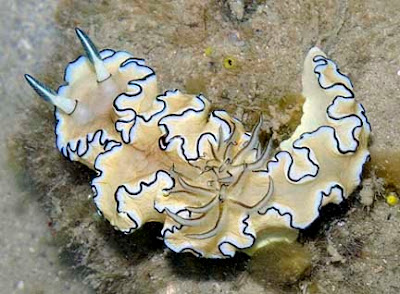 The rest of the team have better eyes than me. Marcus saw a really weird large nudi laying eggs. While November saw a pretty pink Ceratosoma (see her flickr photo). 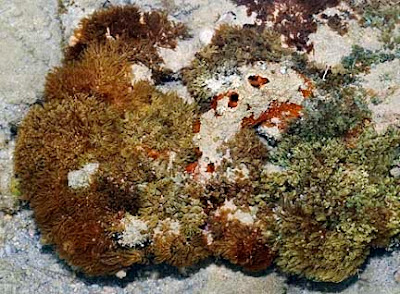 There were lots of these odd feathery animals all over the Terumbu. 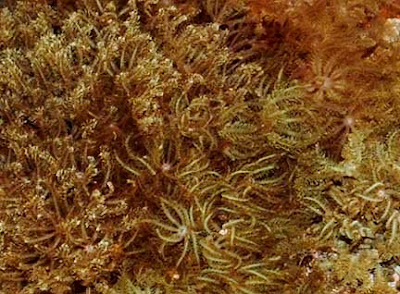 They are some kind of soft coral (see the eight branched tentacles?), but I don't know what they are exactly. I'm also not sure what it means that there is so much of this animal on large portions of the Terumbu.

In various shapes and colours.

Terumbu Raya has a great variety of hard corals. So much that I've done a separate post about them.

The surprise for me at Terumbu Raya was in the diversity of sea anemones in such a small area.

There were of course the usual, commonly seen anemones such as this Wriggly star anemone. 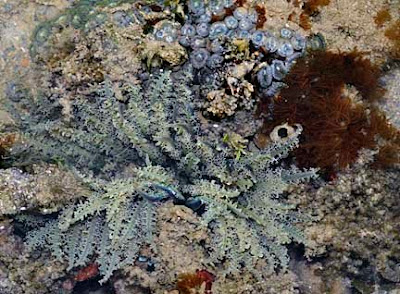 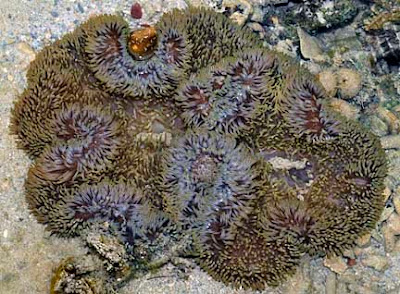 There were several Giant carpet anemones (Stichodactyla gigantea). Alas, as usual I got no luck with finding Nemos in these nems. But Andy and Marcus saw one just as we were about to board the boat. 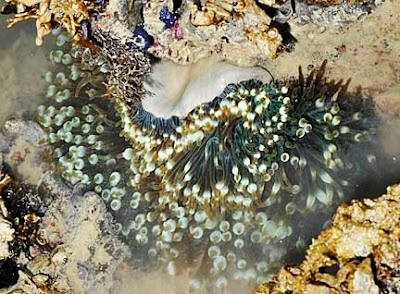 I also came across one Bubble-tip sea anemone (Entacmea quadricolor) which is quite commonly seen on Pulau Semakau. 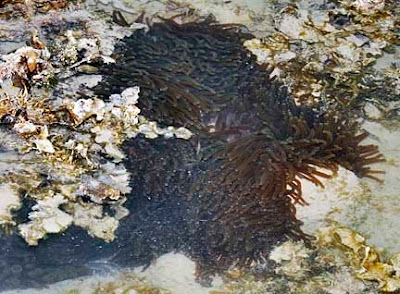 And this dark mass of blunt tipped tentacles in deeper water off the reef edge is probably a Magnificent sea anemone (Heteractis magnifica). 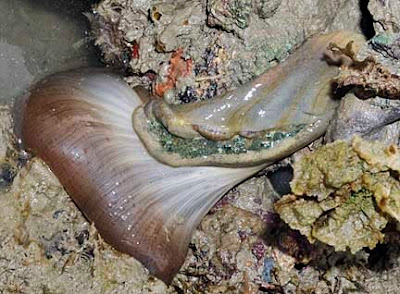 Tucked among the rubble, looking rather sad and limp out of water was this Pizza anemone (Cryptodendrum adhaesivum).

My special find of the day is this Fire anemone (Actinodendron sp.) 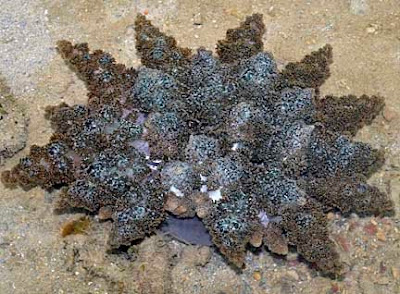 This is only my second time seeing this animal! 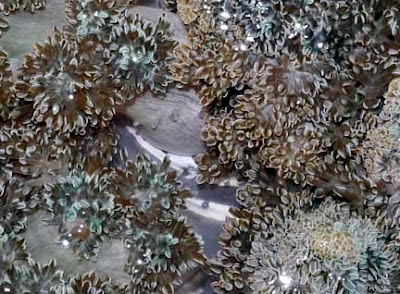 It has white lines on the oral disk. I only got a glimpse of these through the very 'bushy' fat tentacles. The animal has its common name not because of its colours but because of its powerful sting. So of course, I didn't touch it to try to get a better look at its insides!

But my best encounter is one that has no photo. Disturbed by a really loud splash, I looked up and saw a sea turtle take a breath and disappear into the cloudy blue water. Wow! That's a big first time for me! 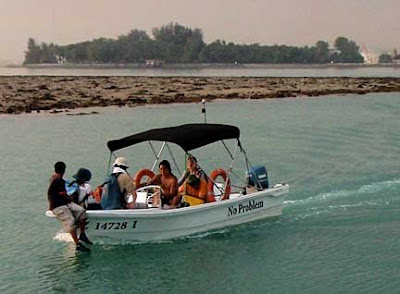 All too soon, it was sunset. On calm waters as still as glass, Melvin took us home on the "No Problem", which is truly living up to its name.