Aquaculture production of seafood will probably remain the most rapidly increasing food production system worldwide through 2025, according to an assessment published in the January 2009 issue of BioScience. 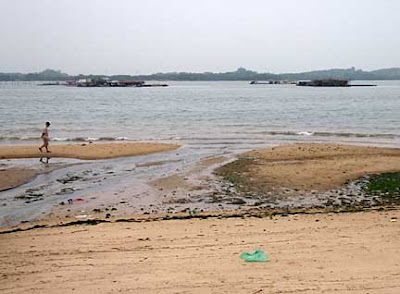 Floating fish farms off Pasir Ris in Singapore
The assessment, by James S. Diana of the University of Michigan at Ann Arbor, notes that despite well-publicized concerns about some harmful effects of aquaculture, the technique may, when practiced well, be no more damaging to biodiversity than other food production systems. Moreover, it may be the only way to supply growing demand for seafood as the human population increases.

Among the most potentially harmful effects of aquaculture, according to Diana, are the escape of farmed species that then become invasive, pollution of local waters by effluent, especially from freshwater systems, and land-use change associated with shrimp aquaculture in particular. Increased demand for fish products for use in feed and transmission of disease from captive to wild stocks are also hazards.

Nonetheless, when carefully implemented, aquaculture can reduce pressure on overexploited wild stocks, enhance depleted stocks, and boost natural production of fishes as well as species diversity. Some harmful effects have diminished as management techniques have improved, and aquaculture has the potential to provide much-needed employment in developing countries.

The full report is available for free download (PDF) on the American Institue of Biological Sciences website for a month.