Roxanne, a 10m 3-ton whale that died in Manila Bay, may not be an isolated case but a sign of serious environmental problems says World Wildlife Fund (WWF) Philippines. "Maybe, it is time we think really hard about what each of us is doing to this planet, and make up our minds to do something right," 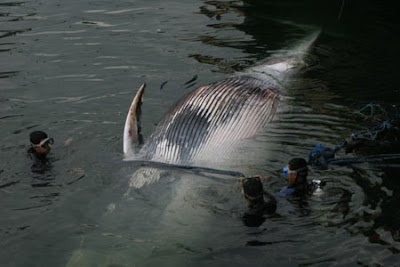 Members of the Philippine coast guard try to lift up the carcass of a minke whale in the waters of the Manila Bay on Dec. 30, 2008. The 10-meter-long minke whale was washed up at a pier late Monday and was tied to a coast guard boat while authorities searched for a crane to haul it out to assess the cause of death. The minke whale may have died of natural causes or may have been hit by a boat before being washed up. It was the first time in recent memory that a dead minke whale was washed up in the Manila Bay, a major shipping channel. (Xinhua/Luis Liwanag) Photo from People's Daily Online.

In August 2007, another carcass of a baleen whale was found floating at the mouth of Manila Bay. A Longman's beaked whale, one of the least studied of all whales, had also stranded and died on a Davao beach. The autopsy of the whale’s internal organs found plastic bags in its stomach.

Roxanne was buried at the 1,000-square meter Dagupan fish cemetery. It took almost three hours to bury the whale. It was the 15th sea mammal and the biggest so far to be buried there. Those who witnessed the burial could not help but lament the demise of another gentle sea mammal as they watched its parts being brought down, chunk by chuck, by a big boom truck into a grave.

Roxanne could have been dragged by a ship to the harbor. Based on its necropsy, the whale could have drowned. The necropsy also showed that the whale's stomach was empty and there was not a piece of plastic found there. Whales and dolphins usually die after accidentally swallowing plastics.

Earlier in December, the Philippines Supreme Council ordered a clean up of Manila Bay. The government was ordered to ensure homes and establishments along river systems have wastewater treatment facilities or hygienic septic tanks; to dismantle all structures and encroachments on rivers, waterways and esteros leading to the basin; to restore fisheries and aquatic resources in the bay; to enforce pollution laws and draw up public education on pollution.

Full articles on the wildsingapore news blog.
Posted by Ria Tan at 7:21 AM