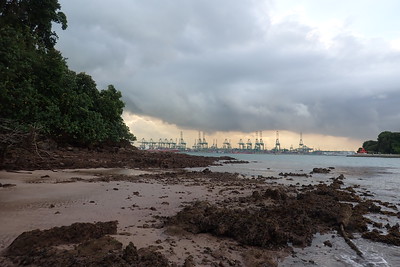 Fortune smiles as we 'siam' the wet weather, and see massive blooming of seagrasses on the shore! Kelvin flew the drone which revealed features that I didn't know about this shore. My last survey here was in Apr 2021, although the team surveyed in Nov 2021 and May 2022.

It was wonderful to see Tape seagrasses massively flowering today. This shore is where I often encounter such events. Male flowers are tiny (1cm) and when these float on the water surface, they look like small pieces of white polystyrene or styrofoam. The male flower has one end that is water repellent, while the other end is attractive to water. So the flower will 'stand' upright on the water surface. James took the great closeups of these male flowers today. 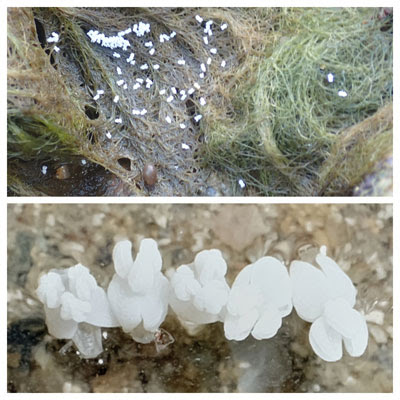 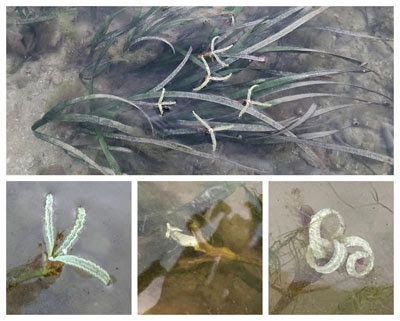 I felt ill halfway through the survey, so didn't get to look carefully around. But thankfully, the rest of the team did, and saw some special finds. Che Cheng - the Upside down jellyfish, first spotted last year. Also the rarely seen Jeweled chiton. James - the Strawberry slug and Kelvin various corals. There were also some small Haddon's carpet anemones on the north shore, and many Cake sand dollars on the sandy strips between the rocky areas. 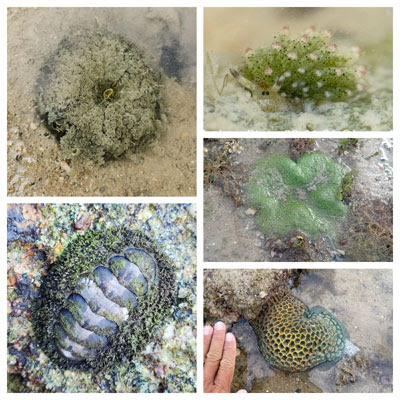 On the northern side facing the mainland, the narrow slivers of natural shore that escaped reclamation for Resorts World Sentosa still have many clumps of Tape seagrass with long leaf blades. 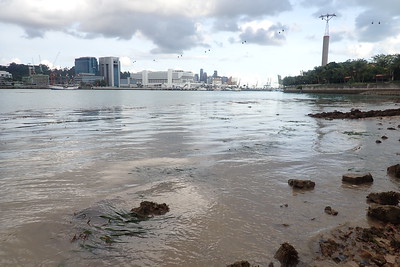 As on my last survey in in Apr 2021, there was sprinkles of Spoon seagrass with small leaves all over the sandy areas. The small patches of Sickle seagrass on the north shore are still there. But while the leaves were green, most were deeply cropped. On the southern side, I noticed a lot of cropped Tape seagrasses, some down to only about 10cm. I didn't manage to survey the seagrasses near the seawall near Rasa Sentosa today. There is still a bloom of Bryopsis green seaweed on the shore near Rasa Sentosa. This bloom seems to be never ending. 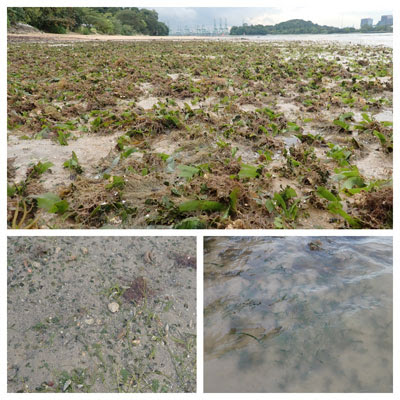 The natural coastal forest that cloaks this natural cliff has some of the last of Singapore's now rare coastal plants. Among them is Nyireh laut which is Critically Endangered in Singapore and we probably have only about 7 trees on our shores. The mother tree and her older daughter tree are still alright. The leaves seasonally turn yellow and fall off, this is normal. It was nice to see the very young Nyireh laut that has settled under the cliff some distance from the mother tree is still doing well. I first saw it in July 2017. The patch of Raffles pitcher plants are also still there. 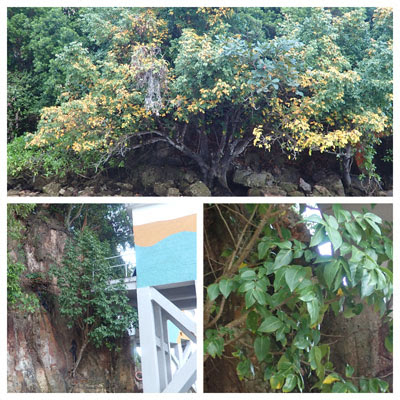 The massive landslide that I first saw in Apr 2021 seems not to have gotten worse. The vegetation has grown back. 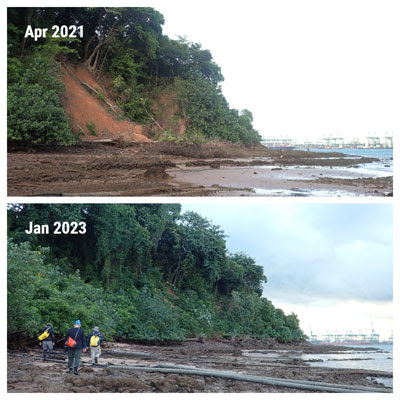 Kelvin flew the drone and gave us new perspective on this familiar shore. Like this little 'terumbu' just off the northern side of the shore, which I didn't know of until now! The drone footage also showed extensive murky water, unusual for this shore.

Hope this unique shore stays safe until we can return again.


Photos by others on the survey