Well before dawn, we survey one of our favourite shores, Pulau Sekudu or Frog Island that lies just off Chek Jawa on Pulau Ubin. 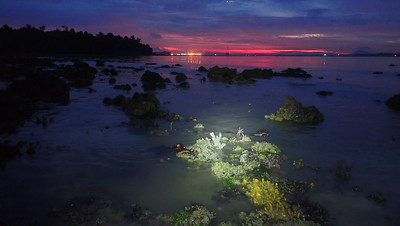 Today, I saw signs of dugong in this tiny island's lush seagrass meadows. Sponges, corals, sea fans seem to be doing well, and the Knobbly sea stars seem to be reproducing. We also saw a stonefish!

The seagrasses are growing lush and fresh on Pulau Sekudu. I looked and as usual, I only found a few furrows that looked like dugong feeding trails. 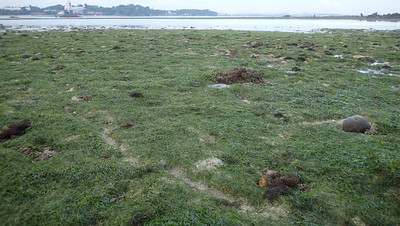 Dugong feeding trails are formed when dugongs chomp up seagrasses including their roots, leaving a shallow meandering furrow of about equal width and depth. There are lush green clean (no epiphytes) growths of Spoon seagrass (both small and large leaf blades). There were many patches of Fern seagrass and Needle seagrass. Serrated ribbon seagrass seems to have spread to a larger area, now found in sparse patches from the mid-water mark to the low tide line. Compared to what I saw in July 2019 and in Jun 2018. I saw only one clump of Tape seagrass. It had leaves that were only about 50cm long. The rest of the team saw several other clumps and they all had long leaves. 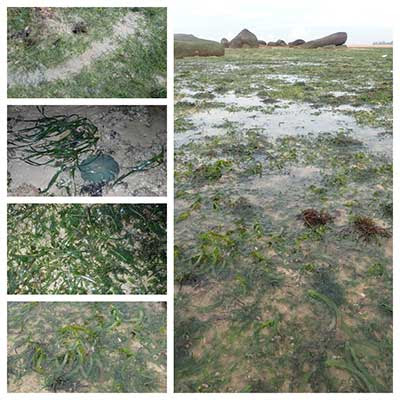 It was great to see many colourful patches of large, well grown sponges in a wide variety.  Growing on the lower portions of the rocky areas (where they are only exposed at very low tides). It reminds me of Chek Jawa before the mass deaths in 2007 and Beting Bronok before it started to fade away. 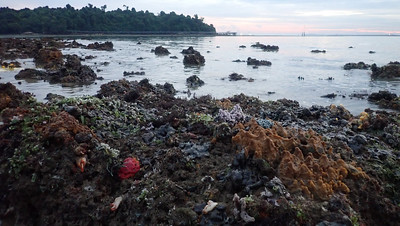 This is similar to what we saw in Dec 2021, which was an improvement over our surveys in 2020. I didn't come across any nudibranchs, but the rest of the team did. 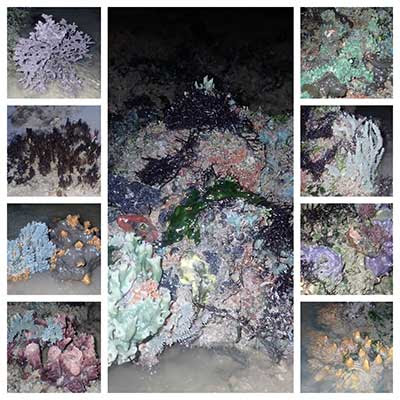 It was good to see large Knobbly sea stars on the arm of the lagoon. I saw about 3 large ones (30cm diameter), these are grizzled old grandmas. It was more exciting to see 2 smaller ones (about 20cm), suggesting that the population is reproducing well. 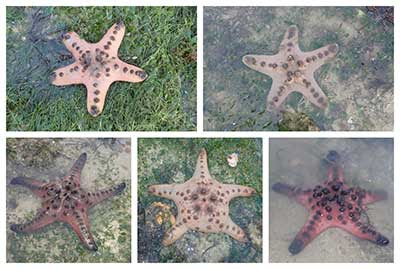 Finally, the team saw Biscuit sea stars, which have been missing from Pulau Sekudu since Jul 2020. Here's a photo of one shared by Dayna.
Like most of our northern shores, the stars of this shore are the echinoderms. The usual common 'northern' sea cucumbers were also seen: Thorny sea cucumber, Pink warty sea cucumber (though these two not as plentiful as seen on Changi). Among the sponges, many Orange sea cucumbers, Purple sea cucumbers, as well as Big synaptid sea cucumbers and Sponge synaptid sea cucumbers - looking like worms and snakes. I also saw a Sea apple sea cucumber. There was a Ghost brittle star that usually lives in Ball flowery soft coral. The long time resident Diadema sea urchin is still there. 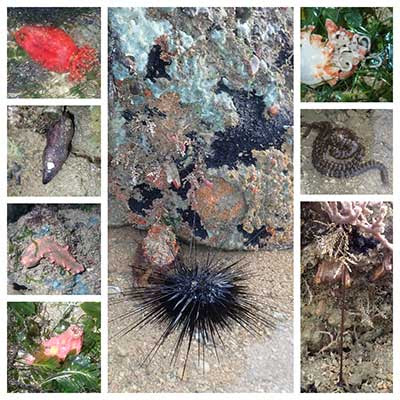 I saw three Onyx cowries in this Purple branching sponge. Are they eating the sponge? 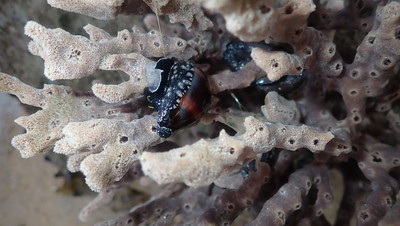 James spotted a Stonefish! Can you see it? This fish is always a source of morbid fascination for me. 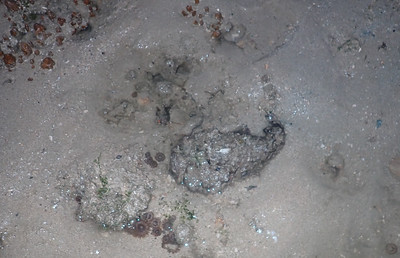 Today, I saw a variety of sea fans. Most colonies were small, but looking healthy. Some had lots of Tiny colourful brittle stars on them. The rest of the team also saw healthy sea fans of various kinds. 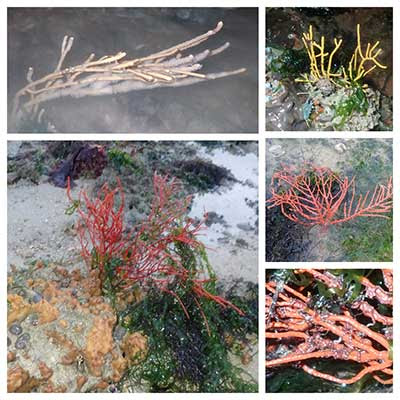 Other interesting sightings include two stranded Huge jellyfish. There were many mama Noble volutes laying egg capsules today. Worms can be odd on the shore. The star-shaped thing is a fan worm with its tentacles stuck together out of water. I also saw a Lightning flatworm and a Blue-lined flatworm. 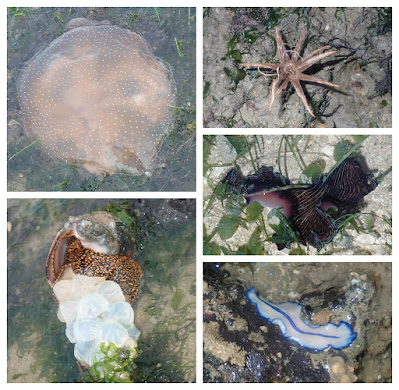 The small Boulder pore coral colonies on the arm of the lagoon are still there. They were all nice and brown (not bleaching) and well formed, only one had a whitish patch. I also saw one medium sized well formed Flowery disk coral, the rest of the team saw other colonies of this coral too. Dayna saw the Pock-marked coral colony and it was still alright. 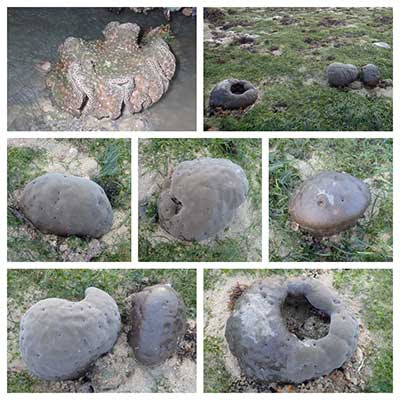 Flaring at petrochemical plants at Pengerang Johor lit up the night sky during our predawn survey. It continued burning after sunrise. We saw the flaring too, during yesterday's survey of the Lost Coast. 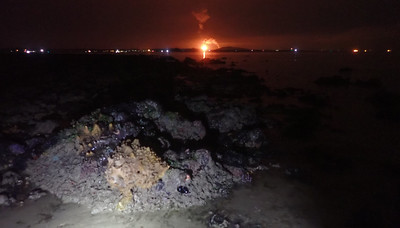 Pulau Sekudu is off limits since 2007 and requires special permission from NParks. Thanks to NParks for permission and support to do these predawn low spring tide surveys of the island. 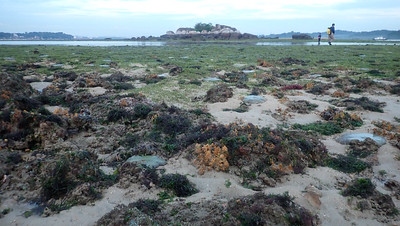 What is the fate of Pulau Sekudu?

Chek Jawa and Pulau Sekudu is slated for reclamation in the Long-Term Plan Review. The plan includes a road link (black line) from the mainland jumping off at Punggol, crossing to Pulau Ubin through Chek Jawa to jump off to Pulau Tekong before circling back to the mainland on Changi East. Proposed reclamation (in yellow) will bury Pasir Ris shores, Pulau Sekudu and Chek Jawa as well as a large stretches of Changi Beach. 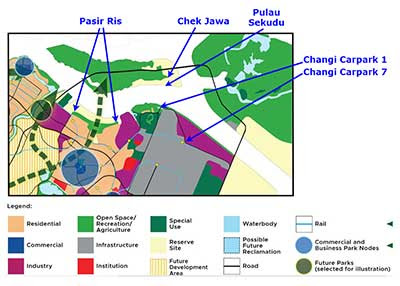 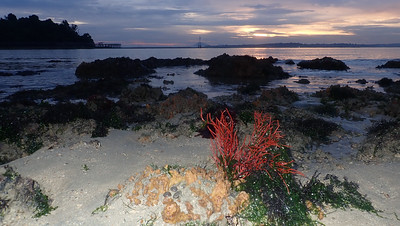 
Others on this trip: Vincent Choo, Marcus Ng
Posted by Ria Tan at 2:59 PM